How Do I Know My Memory Card Is Dying?

I have a 2GB SanDisk Extreme II (I think it's a II) CF card that I use as my main card in my Nikon D200. I normally shoot, take the card out, place it in a cheaper reader, and copy the pictures to my NAS using my iMac. I then format the card using the camera.

I've had the card around 3 years. I'm not exactly sure how many writes it's seen (I use another card on occasion so I could extrapolate from the number of total shutter presses reported in a RAW file).

The symptom that I'm seeing is that occasionally I'll fire my D200 in high speed and on the second or third shot an "Err" message will appear and all pictures taken since I started holding the shutter are gone. I doubt it is my camera as I've used my other card and it does not give the same error.

I tried formatting the card on my iMac using the disk utility and then reformatting it in the camera. This seemed to make the error go away for one or two sessions, but it is now back.

Is there a way to verify that the card should be replaced? What is the normal life span for CF cards?

The symptoms you have describe indicate a card you shouldn't trust any more. Bin it and buy a new one before you lose something important to you. The price of memory isn't high at the moment really so you might as well replace it.

Since a card failure is catastrophic and the lost data is almost always unrecoverable (or you should assume it is!) -- and since it's most likely to happen in the field where you don't have many options, my policy on cards is simple:

I generally buy more, smaller cards rather than one larger. I typically buy a size or two below the largest generally available card. they're also a lot cheaper per megabyte than larger cards.

I always carry spares, never "one" card. These days, I carry 2 16 gig cards for my 7D (one in camera, one as a spare). I carry a half dozen 4Gig cards with my 30D since it's data requirements aren't as significant.

I always format the card in the camera before shooting. that also makes sure I don't start the shoot with the card half full and wonder where my space went.

I rotate my cards so they all get about the same amount of use, so you aren't wearing out one card while leaving the spare unused.

I always buy cards from major manufacturers -- I currently carry some from Kingston and Lexar. This is not a time or place to "save a few bucks".

I typically retire a card at 18-24 months just as a precaution. No sense pushing to failure.

The FIRST time I get a corrupted image or some kind of read/format error on a card, it's retired and I replace it with a new one. period. exclamation point. Once it errors once, I won't trust it again. If I get an error in the field, it goes in the pocket immediately for data recovery, no more images written to it.

And I have not had a card failure or data loss on a card in over two years. for what it's worth. (knock on wood).

Here's the system I used to answer that question:

Compact flash cards have wear-leveling schemes built-in, so that the pictures you take don't get written to the same memory cells every time. The MLC NAND memory used in these things is usually rated for 10,000 writes. You should be able to fill the card up completely every day for 20 years straight without wearing out the flash memory itself.

There are probably other ways they can fail, though. The contacts could wear out. The bonding wires inside the chip or the solder outside could crack. I think you've pretty much answered your own question when you point out that your other card doesn't give you trouble.

As all the other answers suggest, if a card failed once, I would not trust it again. Ever.

However, if you suspect that other factors led to one picture being messed up and if you are on the tightest budget imaginable and/or if your camera supports dual cards, then you could try to use some test tools to see whether the card is the problem or not.

Please note that of course, every test will further wear out any card - so I would not do this on a regular basis, as it will most probably decrease your cards' lifetime.

On Windows, I like to use the portable tool H2testw. It is distributed/maintained by a German magazine, so its website is written in German - however, the tool offers an English interface, too, and it is quite easy and straightforward to use anyway. 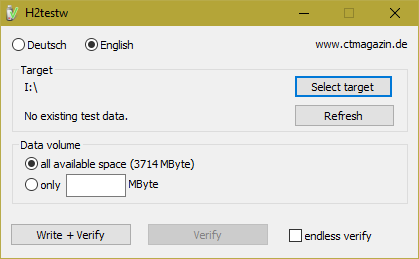 Freely translated, this means that the tool writes random data to your card - and then it reads that data and verifies it. It can also print a detailed report afterwards.

For Mac OS and *NIX systems and also Windows via CygWin, F3 - Fight Flash Fraud seems to to just about the same:

f3write will write large files to your mounted disk and f3read will check if the flash disk contains exactly the written files:

Not the answer you're looking for? Browse other questions tagged memory-card or ask your own question.

3
Is deleting pics from memory card in camera dangerous?
7
How do you unlock a memory card?
1
Memory card capacities and set up in Nikon D7000
0
How can compute write speed and capacity requirements for memory card?
0
How to fix memory card error on Canon camera?
1
Does anyone know what kind of storage card this is?