I am not sure if this is a telemetry question or simple geometry but came across to similar questions in this forum, but I think this is a bit different; and actually "simpler" (compared to "autofocus" solutions) since I move the camera itself by a given amonut of dX and somehow "measure" the image height and observe a dI amount of image size change. Hence I believe make it camera independent. I am not sure if it depends on focal length. Does it help using more than one object image ratios for a given dX? 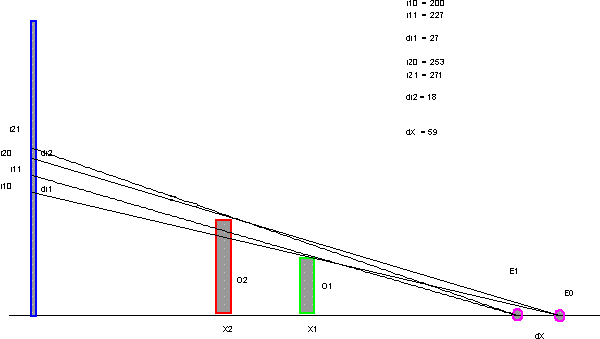 Yes; mathematically speaking I have ended up with such an equation:

Here the O1 represents the object height, which we need but do not have.

On the other hand again in this forum I had seen a piece of information which said the image size is inversly proportional with distance, i.e.,

But my original drawing was not drawn with this logic, to be able to display a larger image for a nearer object (for x1- dX case). Hence I can not use these to equations as one set to solve for x1. I just could not manage to combine the two (I can not comment to an answer to my question, so I had to answer my question again to ask a question).

So I have managed to put up a better drawing, which I believe is correct: 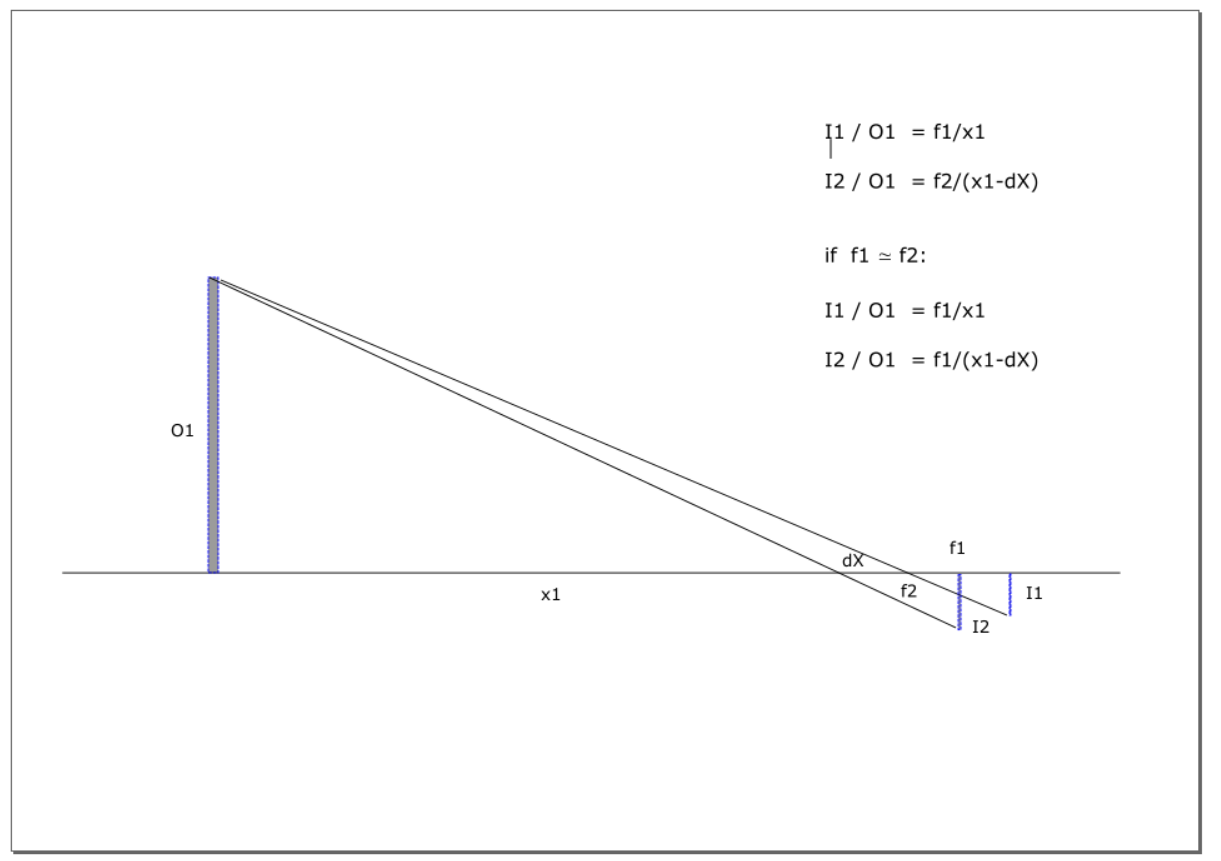 Here we have one object only. Camera moves forward to take image I2. Normally, I believe f1 and f2 are different; but compared to x1 distance, if we assume f1 = f2, then we get a set of two equations, to solve for x1 in the form of:

and then we can solve this quadratic equation and find the roots. Is this a viable solution? You may well argue that I2 >> I1 as f2 >> f1, and we gain nothing out of these equations.

subject-distance pixels
Share
Improve this question
edited May 1 '17 at 18:47

Yes, it's possible to do this. It's called photogrammetry. Depending on what you're trying to calculate, you may need to already know other pieces of information. For example, if you want to know the distance between 2 objects, you need to know their sizes.

I believe that Photoshop has some options for photogrammetry, though I've not used them myself.

Not the answer you're looking for? Browse other questions tagged subject-distance pixels or ask your own question.

4
Why does calculated distance of an object in an image vary when zooming?
0
I have camera specifications but don't know the actual focal length
5
Setup for taking photos of large flat surfaces (maps/plans/textiles) at limited distance
0
Calculation for getting dimension of object in image not working
2
What is 'sensor height?'
1
How to accurately determine the size of a nearby object (~15cm) using the autofocus focus distance?
0
Measure in photo formula help
1
Calculation of the heigth of the camera