Why are high white balance temperatures redder when warmer objects are bluer?

I know it's dumb to ask this type of questions. But, I still don't get this.
I've read the "Black body" story and know that when it's heated, it gives off colors; 'warm' colors (red→orange→yellow..) that have low color temperatures, at low temperatures, (I mean, when it is cooler than afterwards) right? And, the black body gives off 'cold' colors (white→blue..) that have high color temperatures at high temperatures (when it is hotter than before), right? Correct?
So there're two, yes, very dumb, questions and the latter one is dumber..

Please, forgive me for my ignorance...

The Why Different is just a difference between physics and art. The "temperature" simply is the actual color of black bodies when heated high (Like steel in a furnace). They do first glow red, and much higher temp turns white or blue. Just does, in physics. And the color does represent temperature.

But the art world has reversed notions, because mere humans seem to perceive red and orange colors (fire) as warm, and blue colors (ice) as cold. The red hot metal is an unusual situation, rarely actually encountered day to day.

Not sure which slider you see, but generally, the color from incandescent light is orange (maybe 3000K), or the open shade sky light is blue (maybe 8000K). The direct Sun is more 5000K-5500K, which we call white. That's physics. Then the temperature slider in photography is correction in the opposite direction, seeking white balance. More orange warms blue, more blue cools orange (which is the human perception of Art). The slider is often about correction of color, instead of about measurement of color.

When you slide the color temperature on your camera (or image editing software) up to 10000K you don't actually change the very cool blue/white light in the real world to make it more orange. You change the way your camera makes the very cool blue/white light that is at 10000K look more orange in the picture. If the light is very blue/white then you need to amplify the inverse color of blue light, which happens to be orange, to make it look like normal light centered around 5200K in the picture. But you're not changing anything with regard to the actual light in the real world, it's still very cool blue white at 10000K.

Likewise, when you slide the color temperature on your camera down to 2500K you don't actually change the light to make it more blue. You change the way your camera makes the very warm orange light that is at 2500K look bluer in the picture. If the light is very orange then you need to amplify the inverse color of orange light, which happens to be blue, to make it look like normal light centered around 5200K in the picture. But you're not changing anything with regard to the actual light, it's still very orange in the real world. Your picture is just making it look bluer in the picture.

As you know, metal heated in a fire soon begins to glow. First the metal takes on a dull red glow, then cherry red. As the metal’s temperature rises, the color changes to white hot, then blue-white. It’s these observed color changes with heating that inspired the color temperature system.

Also, you know that most of the world uses the Celsius system. This establishes water freezing at zero (0) and water boiling at 100. The unit degree translates to “step”. Early experimenters discovered that a hydrogen thermometer is super accurate. This is a hollow tube, filled with hydrogen with a float atop the column. The float uniformly moves up and down with temperature changes. Other substances like mercury and alcohol lack this uniformity. Further, as the surroundings cool, the float drops to near the bottom of the tube. It was calculated that the lowest possible temperature is absolute zero, and if achieved, the float would hit bottom. Thus the Absolute temperature scale was born. This scale was favored by many, as all temperatures are positive, no confusing +20 with -20. This temperature scale was renamed the kelvin scale after the scientist Lord Kelvin’s paper of 1848, on absolute zero.

Now many disciplines use the color of glowing hot substances to gage temperature. To name a few: blacksmiths, iron workers, steel making, ceramics, glass blowing etc. Experiments proved that the glowing color and its related temperature was approximately the same for all materials. Key here is the lighting industry that initially was carbon arc and glowing tungsten, adopted the kelvin scale to relate the color output of lamps.

Color films were manufactured to operate under specialized conditions.

Note: custom is to write the word kelvin scale as lower case k and omit the degree sign °.

Why are warm colors said to have lower temperatures?

This is a physics issue. I will try to explain it with as little math as possible so it may be vague so bear with me. Recall the color wheel and that mixing all colors equally would give you white. Now look at this spectrum of radiation emitted by a body, straight from Wikipedia. I will skip for now what a black body means. I will also urge you to ignore the black curve marked "Classical Theory" as it is not valid. 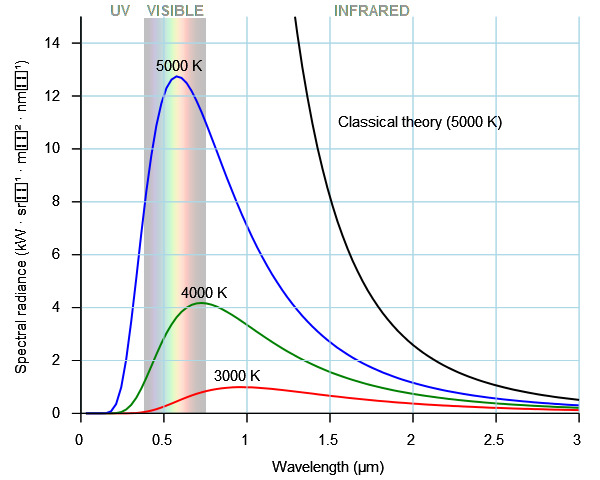 As the temperature decreases, the peak of the black-body radiation curve moves to lower intensities and longer wavelengths. At round 5000K you have a nice mixture of all colors so the mix appears more white. But at a lower temperature, red color is more intense so a lower temperature corresponds to a warmer color. A higher temperature would peak more towards the left and hence cooler. Many modern detectors use this to determine the temperature of an object including night vision.

The artistic/subjective model of warm versus cool colors predates the scientific model based on Planck's Law by about 100 years. Perhaps red → warm and blue → cool reflects a psychometric property of the human vision system. And perhaps not, for the same reasons that photography is or isn't an art or a science.

On a cold wintry night, if I trust Goethe's color sense I wind up warmed in the orange light of a hearth fire though scientific color suggests laying upon a starlit snowbank.