How does a 'reversing adapter with automatic system' deal with the *inverseness* of the reversed lens?

First, I apologize because I don't know the exact name for this kind of adapter. (Please mention the correct term for that kind of adapters...(I mean those reversing adapters that can keep the lens's and the body's communication going))

I mean this kind of system... 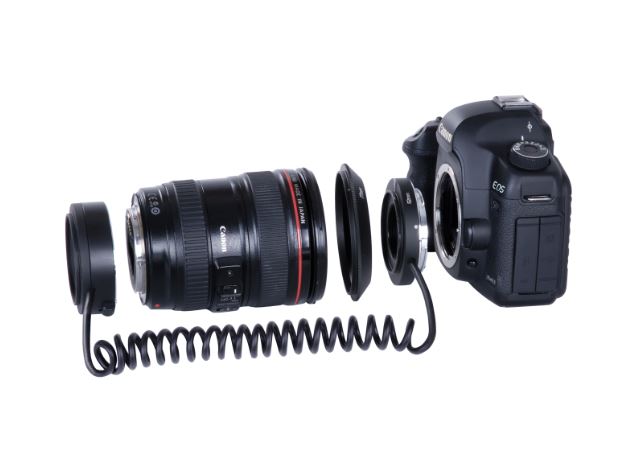 So here's my question. Once the lens gets reversed, the whole light gathering thing gets reversed right? I mean, now the lens is facing its former back to the subject. ....when we look through a telescope from the wrong end, the image that used to be magnified, gets compressed. And thus, (but inversely) a wide angle lens becomes a lens with more magnification. So, with that reversing, don't the aperture and the focus of the particular lens get.. eh..reversed? They do, right? So, how does the system control the aperture and the focus?

When a lens is reversed the numerical aperture reported by the lens may not be the actual effective aperture that results from the entrance pupil as seen from the front (normally the rear) of the lens. The same thing happens when a normal macro lens is focused at the MFD - the entrance pupil is smaller than the aperture value set or reported by the lens which is always normalized when the lens is focused to infinity. But as long as you're doing through the lens metering it doesn't matter because each movement of the aperture from wide open to the smallest setting is proportional. If the aperture is set at f/2.8 but the effective aperture is f/5.6 if one stops down to the f/5.6 setting the effective aperture will be f/11. In both cases making the diaphragm opening one-fourth the area has reduced the f-number by two stops.

The way in which the effective aperture, more properly called the entrance pupil, is affected by reversing the lens is due to the changes in the lens' magnification. When we reverse a lens we typically go from a fractional magnification to a magnification at or larger than 1.

For the purposes of calculating a lens' maximum magnification the size of the virtual image projected onto the film or sensor when the object is at the lens' minimum focus distance (MFD) is compared to the size of the actual object. The MFD is the point at which the lens can't focus anything that is closer. How large we later blow it up to view it after we capture the image with our sensor (or film) is immaterial to the lens' magnification because we can apply the same viewing magnification to the image whether the lens is on the camera forwards or reversed.

If a coin is 40mm in diameter and is placed at the MFD and an image of that coin that is 8mm in diameter is projected by a lens onto the sensor then we say the lens has a magnification of 0.20x or 1:5. Another way of saying that is that the image is 1/5 the size of the real life object. So when we say "magnification" in such a case it doesn't mean we are making the image projected onto the sensor larger than the actual object. In fact we are making it smaller, just like when you multiply a number, such as 40, by a number smaller than 1, such as 0.2, you get a smaller number, such as 8.

If we flip the lens around we should then be able to make it 5X larger, right? Well we could if we could place the camera's sensor a distance equal to the lens' MFD from the entrance pupil of the reversed lens and if we could place the subject at a distance equal to the lens' focal length. But doing so would also mean our image projected on the camera's sensor would be much darker than the brightness of the light reflected by our subject because it would be spread out over 25X the area of the real life object. (1/0.2 = 5, 5^2 = 25)

In practice the lens we have reversed usually has an MFD greater that the distance we can practically place the lens from the camera's sensor and the subject must be at a greater distance that the lens' focal length in order to fit it in the frame and light it well enough to make a good photo. So we give up some of that 5x magnification to fit all of the pieces together, properly light our subject, and bring it into focus.

Note: The following portion of the answer assumes a conventional lens in which the front element moves away from the camera to focus on shorter distances and moves closer to the camera to focus on longer distances. For internally focused lenses or lenses where the front element is recessed in the front barrel and moves independently of the front barrel all bets are off as there are just way too many variables about the optical formula as well as what part of the lens is attached to the the camera when a lens is reversed.

I would hazard a guess and say probably the same way it does normally. As the AF is in body, and the adapter provides communication between camera and the lens it keeps sending signals to the lens till it gets a focus lock

With regards to aperture:

The signals from the camera body controlling the aperture basically tell the lens to "make the light hole bigger" or "make the light hole smaller". Aperture size has nothing to do with lens orientation. It is akin to a scalar value, one that has no vector (i.e., direction) components.

So when the lens is reversed, and the reverse adapter with cable (as shown in the image in your question) communicates to the electrical connector, the electrical wires haven't been crossed, so when it says "make the light hole bigger", the desired effect still takes place: the aperture increases, letting in more light.

NOTE: as Michael Clark's answer explains, the effective aperture is different when the lens is reversed, but the range of apertures (distance from max aperture to min aperture, in number of stops) is the same. Say a particular lens has an aperture of ƒ/1.4 to ƒ/22, a range of 8 stops. Reversing this lens, let's say it's effective max aperture becomes ƒ/8. It still has an 8-stop range, so the effective minimum aperture becomes f/45. The camera doesn't know this; it thinks it's connected to the lens's bayonet mount. All it knows is that whatever is coming through the lens, it's dark. But that doesn't change how the camera talks to the lens. The user is asking for a bigger aperture? "Hey lens, make the light hole bigger".

With regards to autofocusing:

To focus a lens, the camera body tells the lens to move the focusing elements forwards or backwards along the lens's axis. When a lens is mounted normally on the camera, your intuition is correct: the motions and controls are inverse.

However, it doesn't matter. When you reverse mount a lens, you aren't focusing with the lens's focusing mechanism. You should set the lens to focus at infinity (for maximum magnification), and physically move the camera forwards or backwards to focus on your subject.

Those Canon reverse-mount corded adapters are good for one thing only: controlling the aperture of reverse-mounted Canon EF/EF-S lenses. They might be advertised as passing full AF control to the lens, but that's useless. You don't focus the lens when you reverse-mount.

So, how does the system control the aperture and the focus?

You're right that with the lens reversed, the body should tell the lens to move in the opposite direction in order to focus properly. Canon EF lenses have a handful of connections to the body, but most of those are related to power for the lens's electronics and motor. All the lens functions are controlled by a pair of data connections -- one for data from the camera to the lens, one from lens to camera. So reversing the focus function isn't as simple as just swapping a couple electrical connections; the adapter must contain a microcontroller that listens to the instructions from the camera and replaces instructions to move the lens in one direction with an instruction to move in the other direction.

I think you are seeking "reversal" properties that don't exist.

The lens is the same lens either way. For example, it does not matter which side of a simple magnifying glass that you look into (called a Thin Lens model). But camera lenses are a little different in that normally there is a far distance in front (typically a few meters), and a very short distance behind it (mm). (Marked focal length behind is only numerically correct with infinity in front.)

Easier to think of reversing when we expect the reverse, the short distance in front and the longer distance behind. Reversing the lens then better matches the way the lens is built (short macro distance forward of reversed lens). Focal length can affect the short distance, but these two distances and their ratio are what determines magnification. "Magnified and compressed" depends on the distances, NOT the way the lens is pointed. Magnification is actual real life subject size compared to its projected size on the sensor. 1:1 is Same Size both places in any lens or lens orientation (just meaning, at 1:1, then the two distances are also necessarily equal).

Nothing is reversed in any other way (all images are still inverted on the sensor).

Macro does greatly extend this distance to sensor plane, so macro f/stop does stop down (2 stops at 1:1), but it is due to this distance, and NOT due to any orientation of the lens.

Example is that magnification size is the ratio of these two distances (simple trig and geometry) (see http://www.scantips.com/lights/fieldofview.html for more)

Not the answer you're looking for? Browse other questions tagged optics reverse-mount reversed-lens or ask your own question.

6
Can I control the aperture of my lens off the camera body?
4
What are the pros and cons of using macro rail vs lens focus?