I want to create a photograph containing lights that seem to "shine" outward in a cone, but I can't think of how to create this effect (specifically at night)

I find it unlikely that this could be created in Photoshop, nor does it seem likely that there are enough particles in the air to reflect the light, but I can't think of any other way.

Well the cone effect is created by using a light modifier at the source. For example, if you photograph any street lamp at night, you will see the cone coming down. Why? Because the lamp body blocks the light from shining upwards, and it reflects the light downwards in a spreading fashion.

You can achieve this in a studio with a reflector, as simple as this: 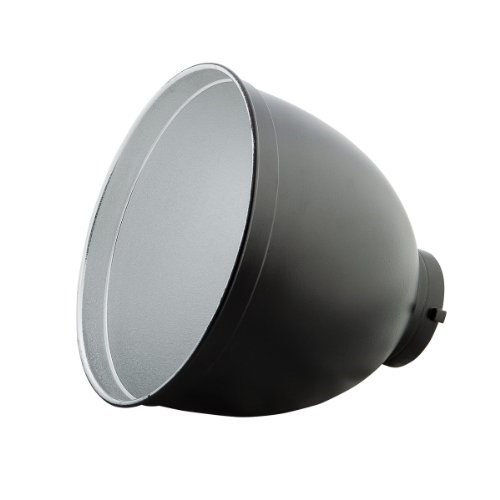 However you wrote about creating it specifically at night. Where? Outdoors? You can still use a reflector like this, with a speedlight on a tripod. (Speedlight = a flash unit you would normally attach to the top of your SLR camera, but in this case you attach it to a remote trigger and put a second trigger on your camera. Fire the camera = trigger the flash which is on the tripod, or anywhere, in your scene).

As to the haze, you won't specifically need fog or similar. Because it's night, the rest of the scene should be relatively dark, so the way the light falls away from the flash to the ground means it gets less intense, the further it is from the flash.

Your linked example does look foggy, however, in addition to the light falling away in a cone from each street lamp.

It looks to me like it's a long exposure of lights on a hazy night. The long exposure ends up meaning that a single particle can have a much larger effect on the end result.

If you did want to reproduce the effect in post, you can look for a filter or effect that creates volumetric lights. For example here's one that works in Adobe After Effects.

Not the answer you're looking for? Browse other questions tagged lighting technique or ask your own question.

46
How can I get photos showing the “shaft of light” effect?
3
What is the blurred light effect in this portrait?
11
How can I recreate this glowing light effect?
4
How would i achieve this background halo effect?
6
How do you set up a photo of a glowing tent in the dark?
0
Lighting setup and light shaper tools to reproduce an image
2
How was the light and dark split effect achieved in this image?
3
Glowing figures photo technique
2
What is the effect of relative size of light source vs diffusion on the quality of light?