Why is my frame stacked image showing a grid?

The following is an auto-equalised image of 200,000 stacked frames from a small web camera. All the frames are of a very dark grey uniform background, and the histogram mode is about -1.5 stops below mid grey. It's so dark in fact that the auto exposure in the web camera could not compensate for the low level. The scene and the camera are static. Individual frame images are very dark and full of sensor noise. You can clearly see the stepped lens mount in front of the sensor. The lower image is one individual frame. [I hope that it shows something as SE resamples posted images to a much lower quality, which is kinda ironic for a photography forum.]

You can also see a grid pattern over the whole image, which I take to be on the 8x8 pixel boundry of the JPEG process. After averaging out 200,000 frames, I would have expected the image to be much much smoother, and without the apparent grid. The mount rings yes, but not the entire grid.

If the frame stacking /smoothing process had failed or not used enough frames, I would have expected 8x8 blocks of varying colours, not just their edges.

Why is there what looks like a fine wire grid over the whole image? 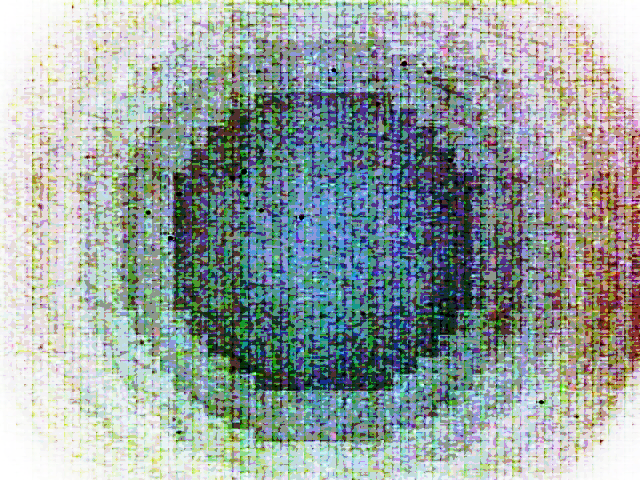 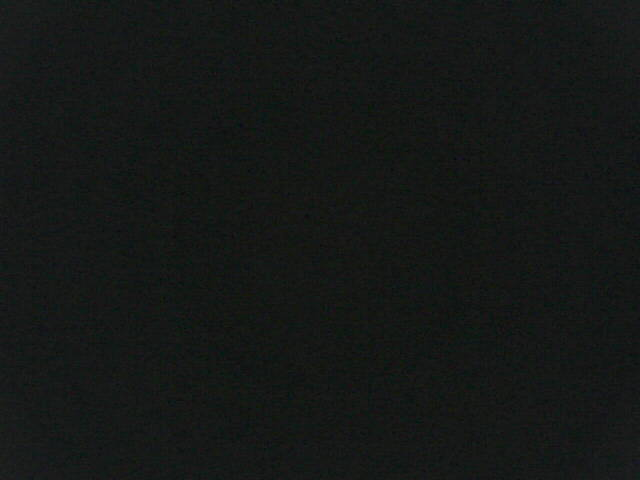 TL;DR: The edge-discontinuity errors between 8×8 blocks introduced by the DCT compression used in JPEGs is magnified by your image stack, which is why the "grid" is so prominent.

If the frame stacking /smoothing process had failed or not used enough frames, I would have expected 8x8 blocks of varying colours, not just their edges.

You appear to have a slight misunderstanding about compression used in JPEG images. You are correct that the compression in (most) JPEGs is done on blocks of 8×8 pixels. Your expectation would be true if the compression were merely as simple as just replacing each 8×8 block with the average pixel value for each block (trivially achieving 64:1 "compression" ratio).

Incidentally, this would be identical to simply downsampling your image(s) by 8 for each dimension, then "blowing up" the downsampled image by a factor 8 without interpolation. This would produce poor-quality images, which is why it isn't done.

Mathematically, a discrete cosine transform would result in fractional numbers that would require high-precision math to maintain accuracy. The "discrete" part of DCT means that the coefficients have been discretized into integer values that can be stored in a byte. This discretization is part of the absolute error between a digital image and its JPEG equivalent.

While the error is small, nevertheless it is there. Specifically, even though the DCT is better at the edges than other Fourier-like transforms, the error is most visible at the edges. This is what you're seeing in your composite image.

Stacking / averaging has the property of more-or-less eliminating random (stochastic) noise (i.e., non-biased sensor noise), because the noise has equal probability of being positive or negative. When you throw 200,000 fair dice, you will see that statistically, all numbers come up roughly equally. This is why you don't see magnified sensor noise in your composite image.

However, biased data, whether there by its very nature (i.e., the image of your stepped lens mount), or introduced externally, is magnified. The fact that your images were all JPEGs, meaning each frame was DCT-compressed, is magnified in your stack.

The reason you are seeing a pronounced grid is because the very nature of DCT compression, due to quantization error and low-pass filtering of spatial frequencies a block at a time, magnifies the slight-but-cumulative edge discontinuity errors between 8×8 blocks.

Not the answer you're looking for? Browse other questions tagged jpeg noise image-stacking or ask your own question.

0
Image stacking with different camera settings
6
Why does raising ISO make image quality appear lower even though my measurements suggest it shouldn't?
3
Why is there no image noise in my webcam dark frame photographs?
2
Why does frame stacking alter colours?
0
How to know the resulting iso of stacked images?
3
Automatic identification of lucky images for landscape photography
0
double image occuring
1
Why are my stacked RAW images overexposed in DeepSkyStacker?
0
Why do Bayer images of total darkness contain stripes?
6
Why is the night sky photo showing uneven color and strange pattern in background?