How to compose flowering plants? 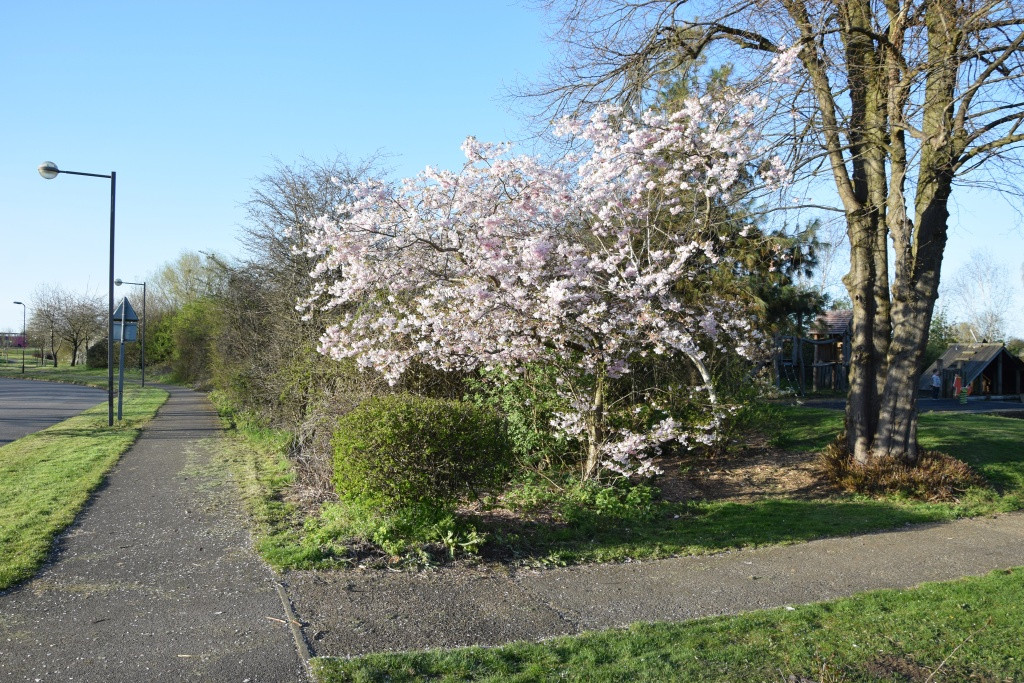 Now this is a golden opportunity! A cherry tree in full bloom! And it has pink blooms, not those boring white ones. And today it's a bright, sunny day, the sky is a brilliant blue, and there's not a cloud in sight. I've got my best lens with me... Oh man, this is gonna be good!

What I actually came home with is about half a dozen pictures like this: 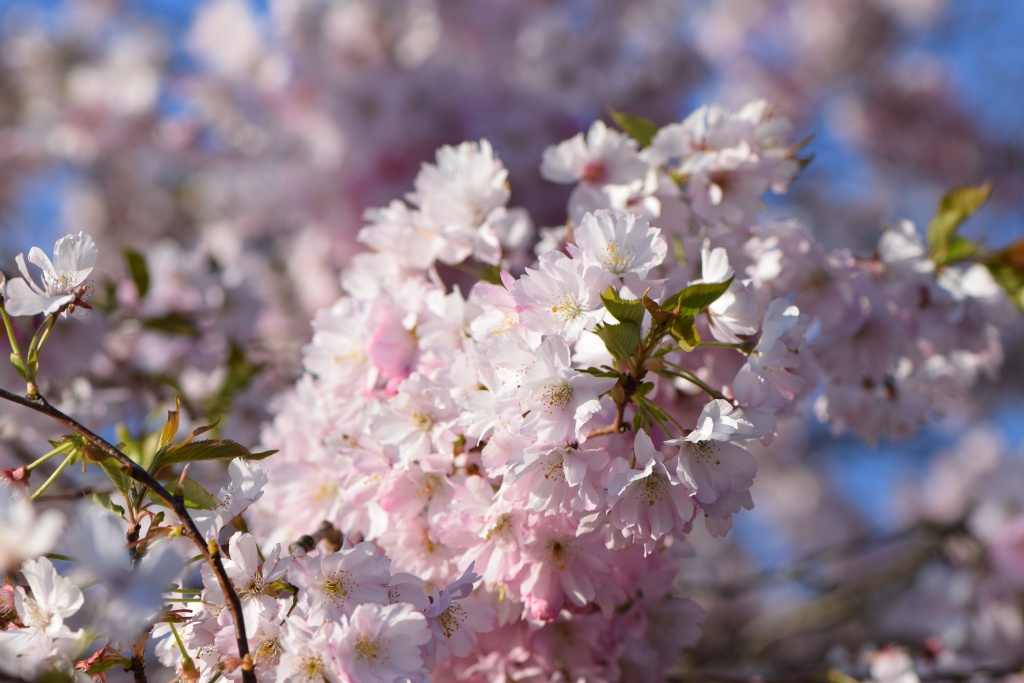 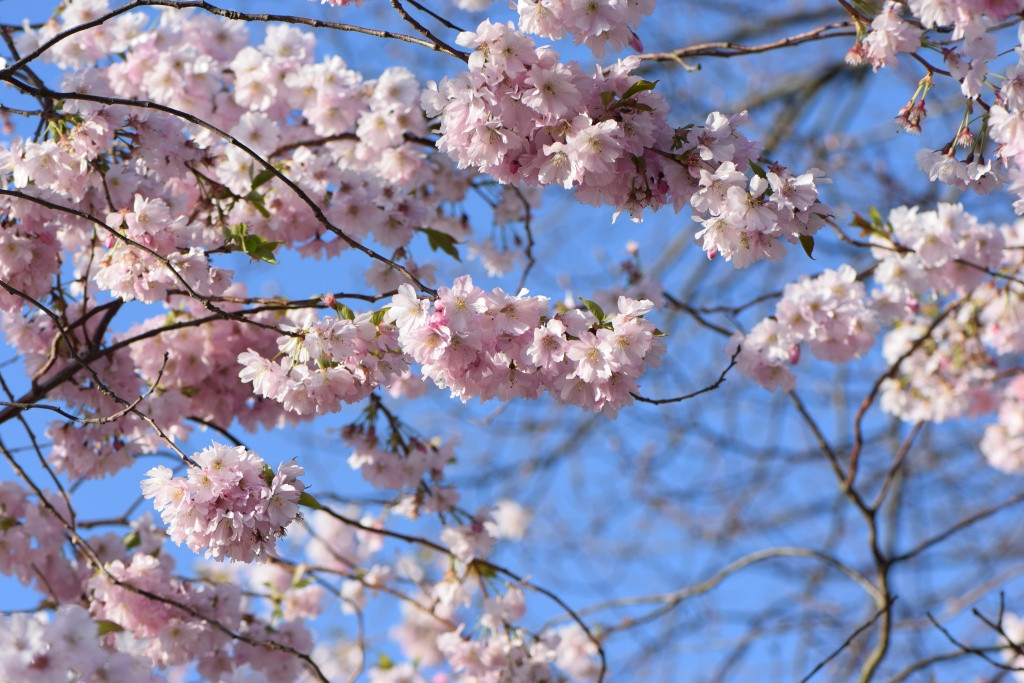 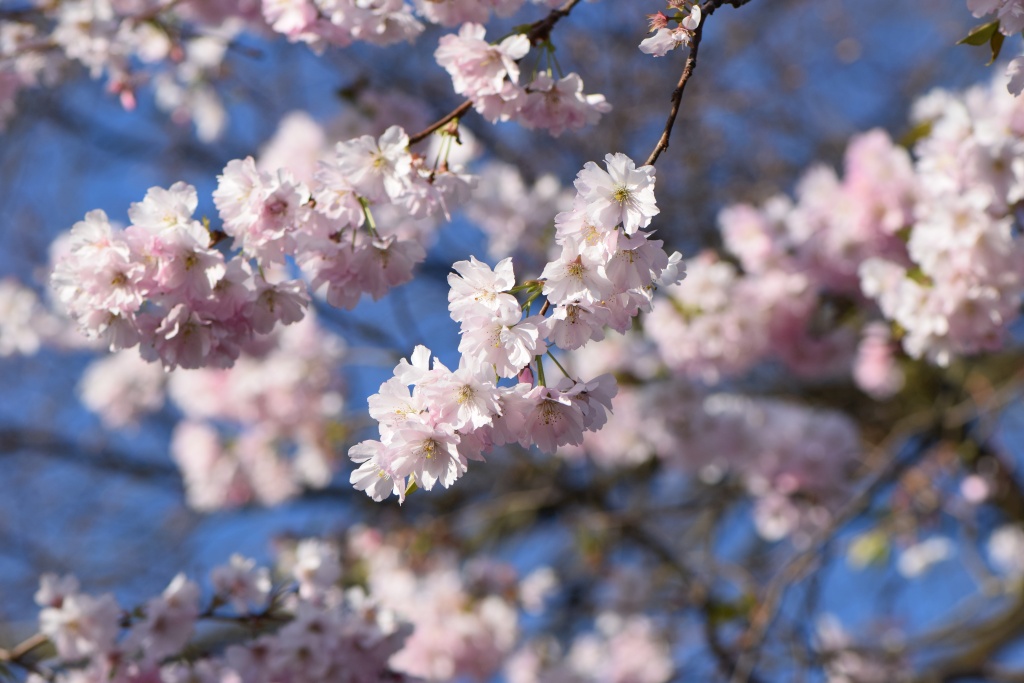 Now these aren't awful pictures. But they're not really spectacular either. I feel like I've wasted my subject. You can see that they all have cool stuff in them, and yet... I don't know... It just feels like it could be better somehow.

I guess basically the problem boils down to "there's an entire bush full of cool stuff in front of me; where do I point the lens?"

I realise this question is kinda vague, but if I could pin down the problem more exactly, I probably wouldn't have a problem any more.

Cherry tree flowers are beautiful. Branches, sticks and leaves... not so much. 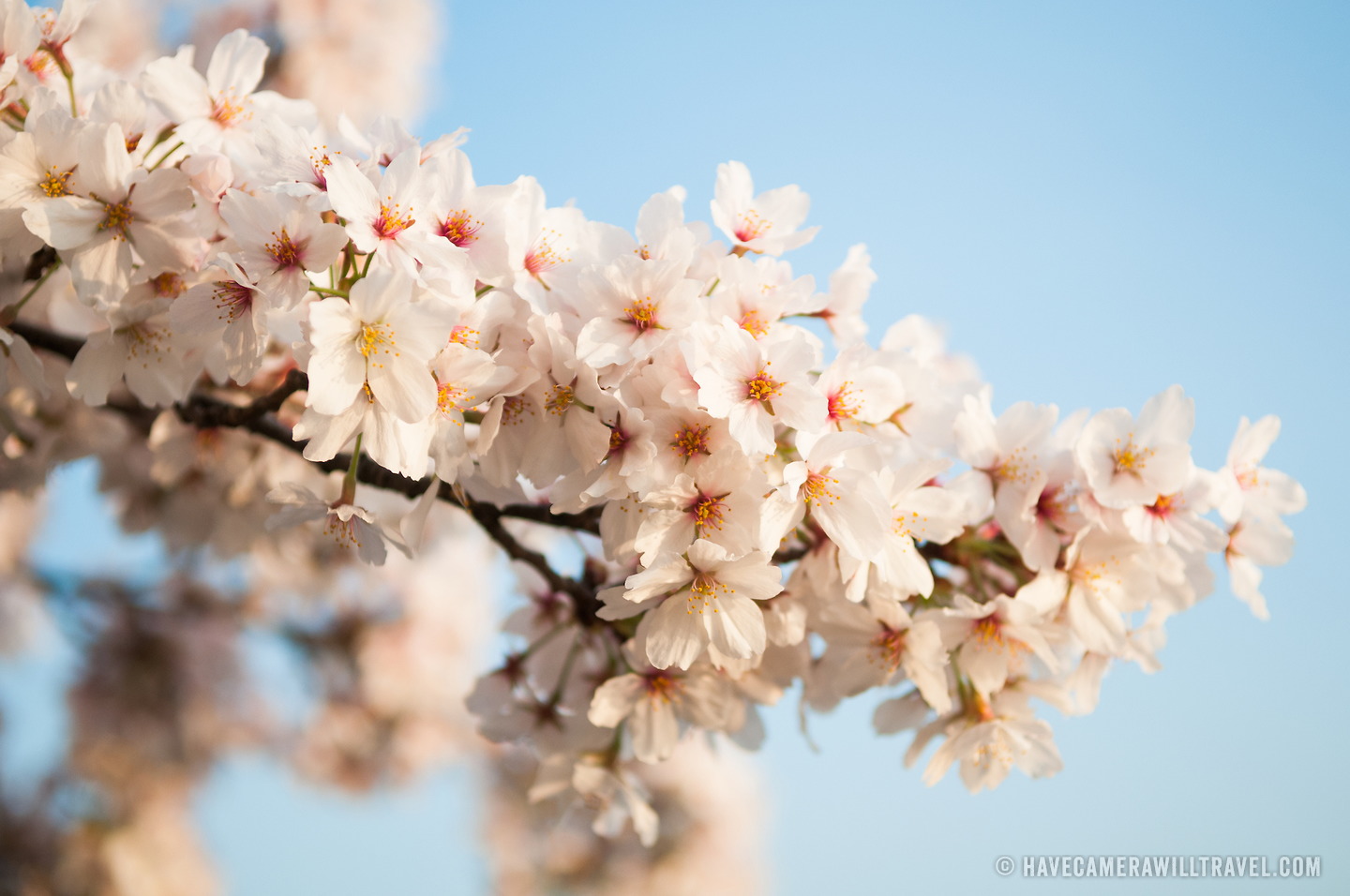 #2. Evaluate Focus and Depth of Field

Use blur and out-of-focus areas to draw attention. The effect is called Bokeh. Macro lenses and telephoto lenses work well with flowers by adding a rich Bokeh blurr and smoothing the background colors.

Example: You could focus on one area and fade off into endless petals and color. 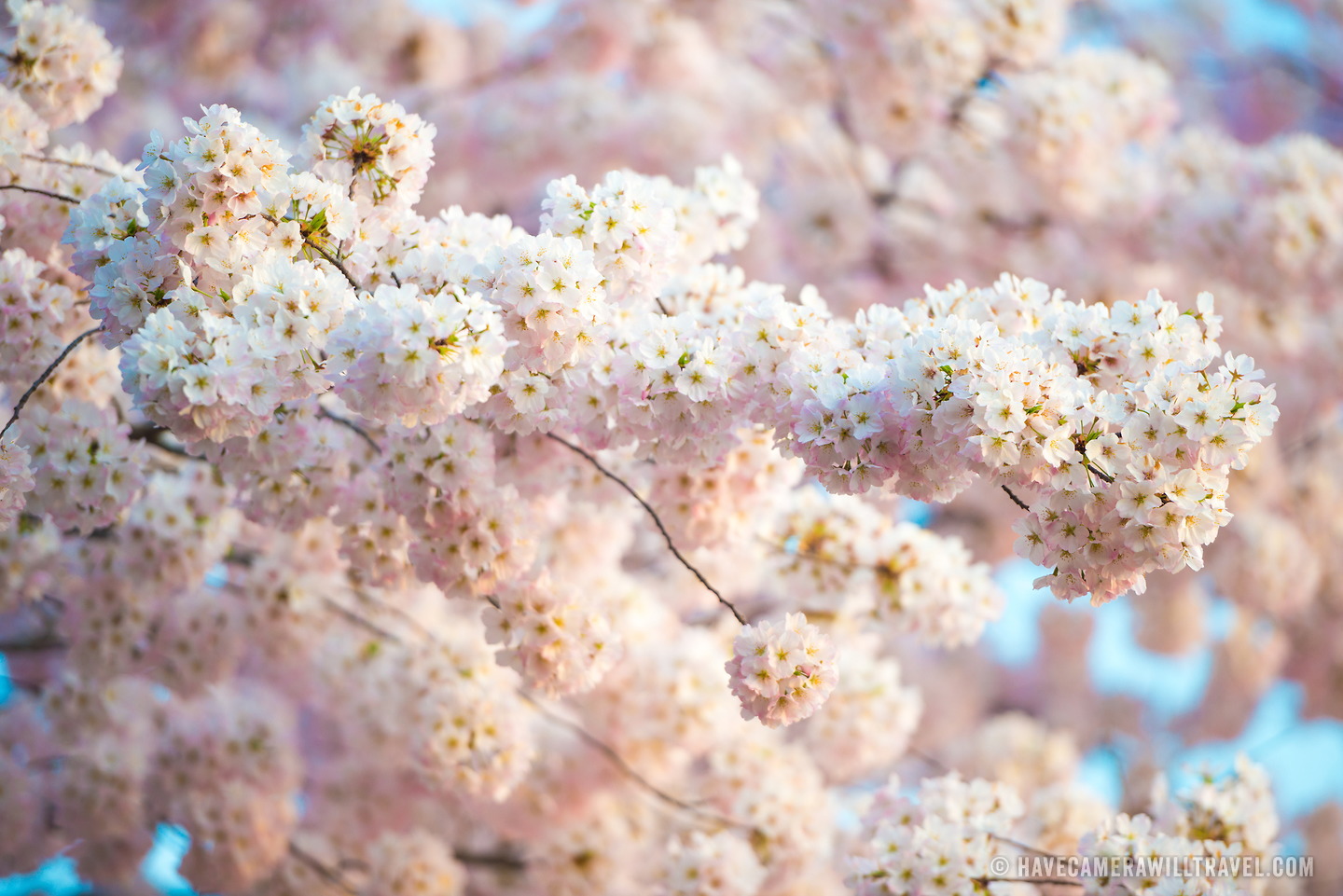 Play with the composition. For example, with one cluster of flowers leaning slightly up, the shot will feel uplifting. Find parts of the flower or plant that interests you, focus and capture what you see. You can start with a closeup of a single flower and work your way out. 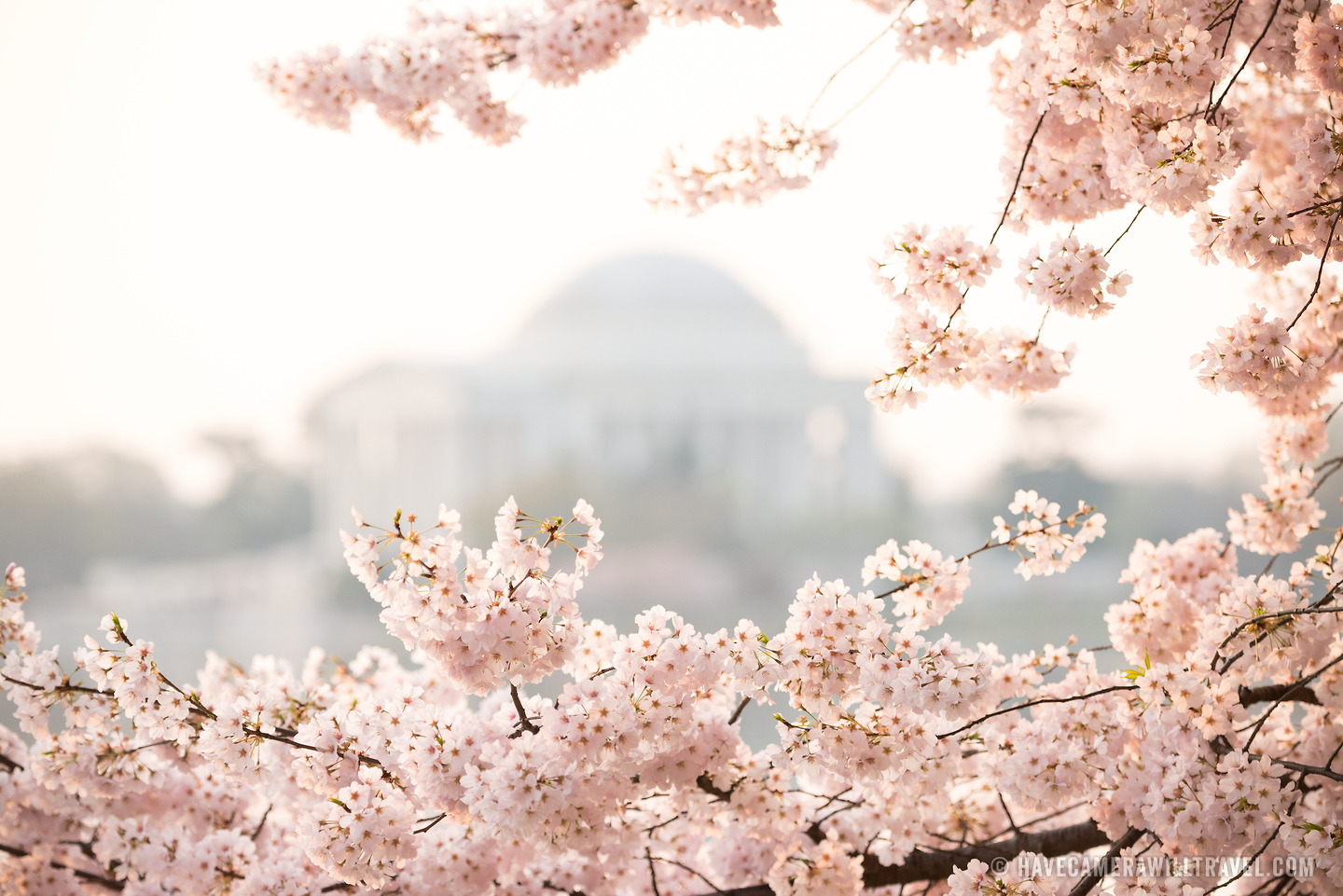 NOTE: To get pro shots outside you will need to get control of your lighting, the subject and your environment.

Go Prepared. In addition to my camera, lenses and flashes I would bring:

Keep Calm: When everything is just right, the wind will start blowing your subject and each image will be out of focus and blurry. No worries. The wind will stop. Keep calm and carry on.

David Coleman has spent time with cherry blossoms and knows them well: https://cherryblossomwatch.com/ 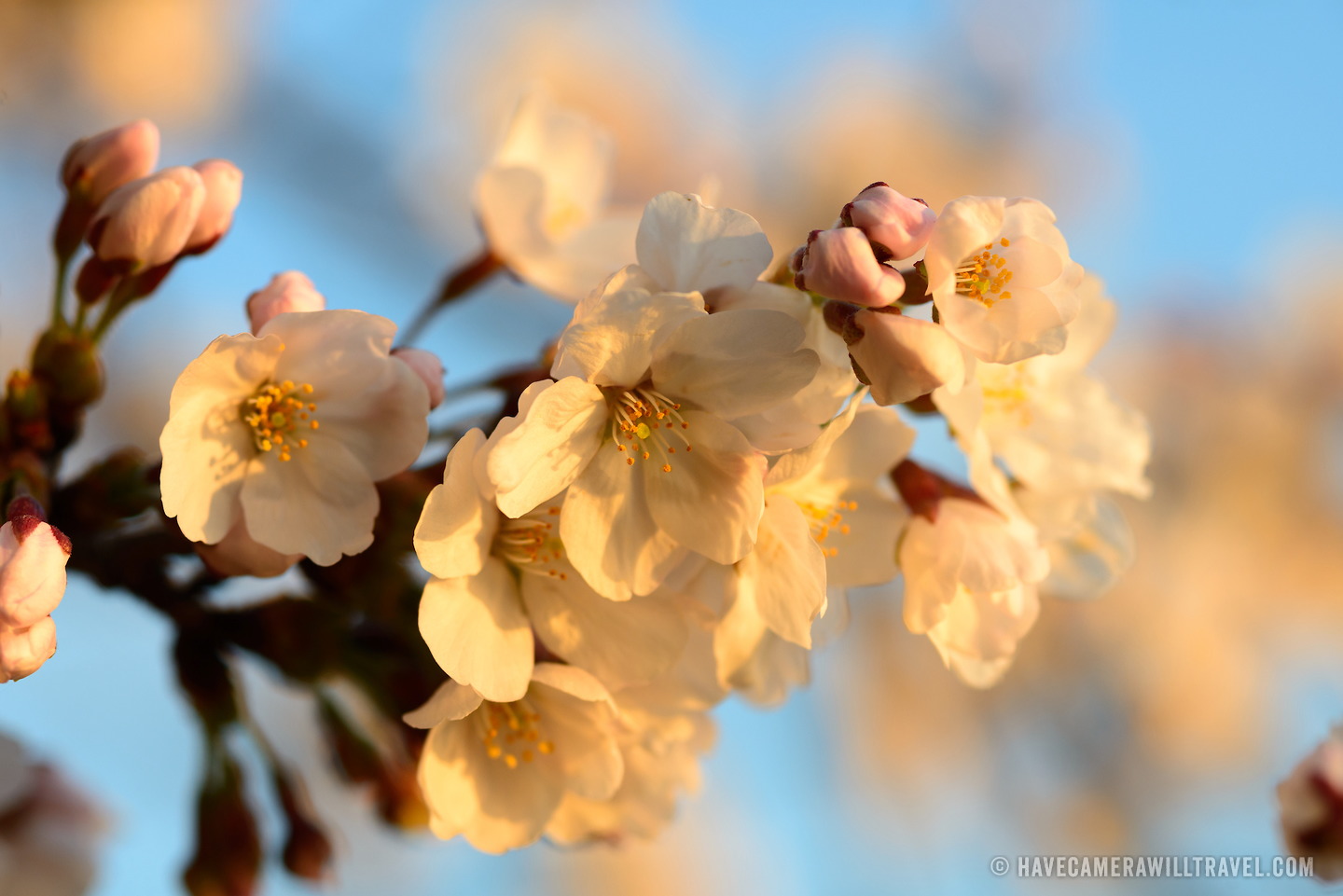 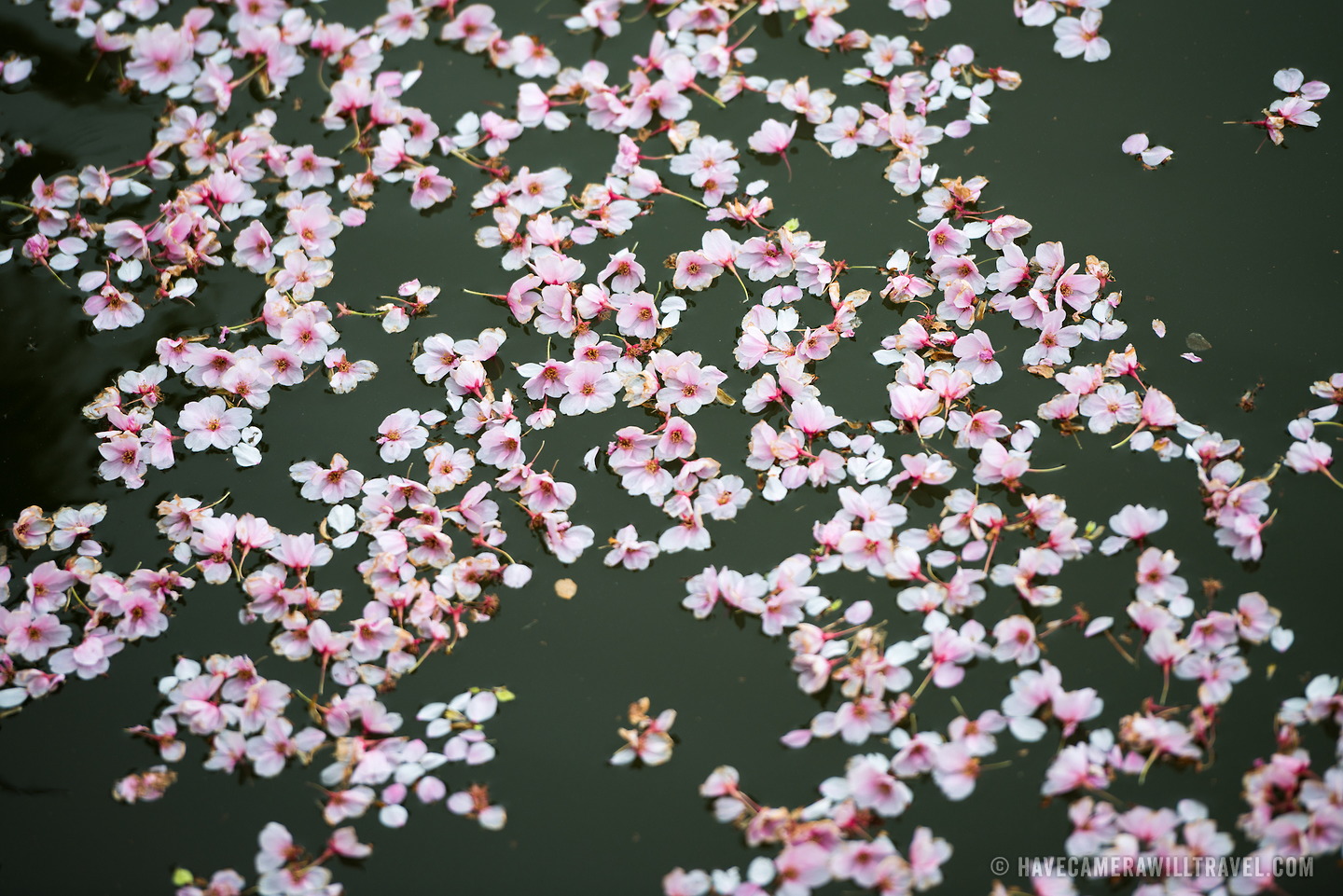 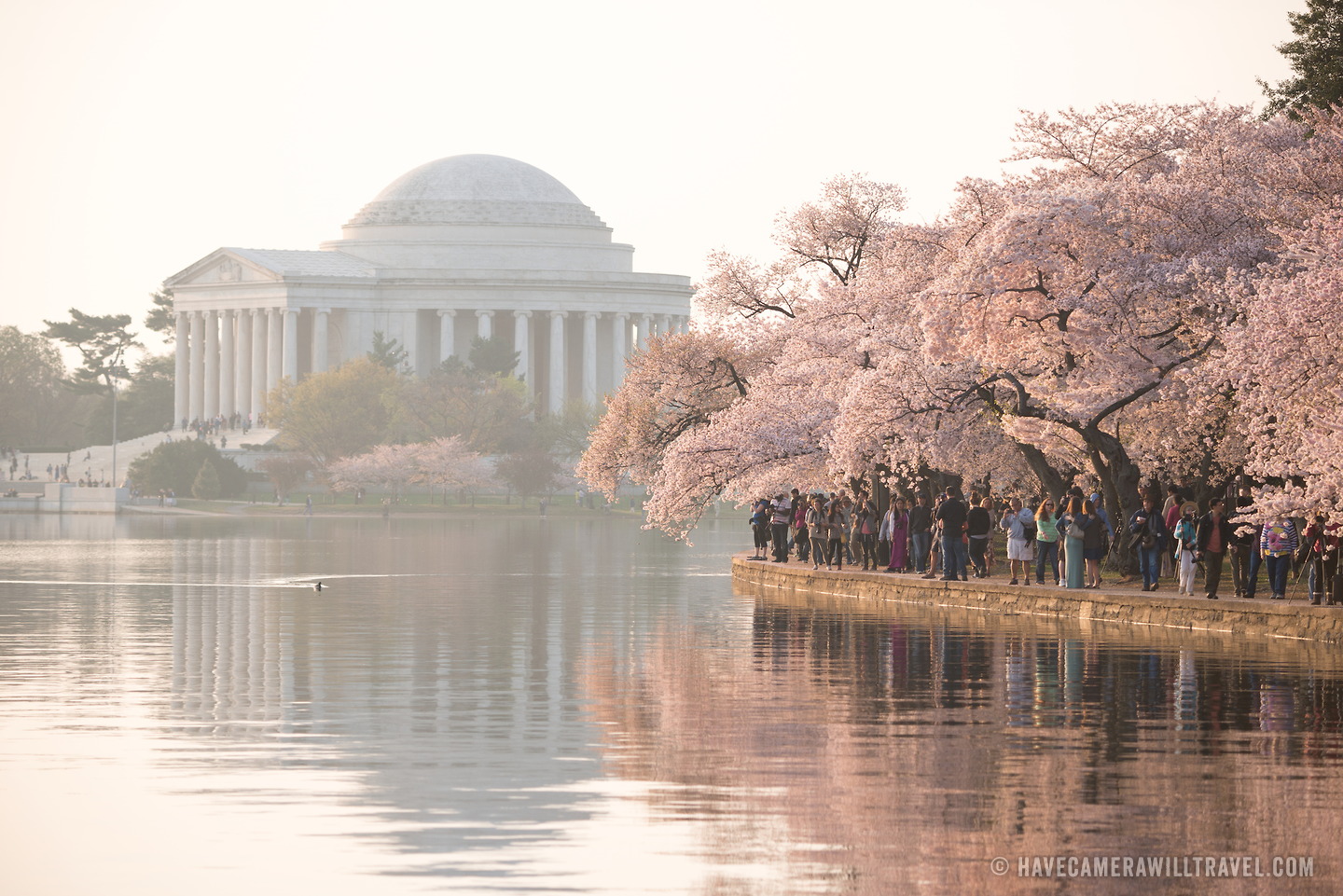 One of the aspects which is lacking from your photos is bokeh. In all three photos, and especially the last two, the background is too sharp; I imagine that the photos were taken around 𝑓/5.6. By using a faster lens, you can isolate your subject from the background. Here's an example, which is far from being a good photo (especially since the composition is wrong), but still illustrates my point: 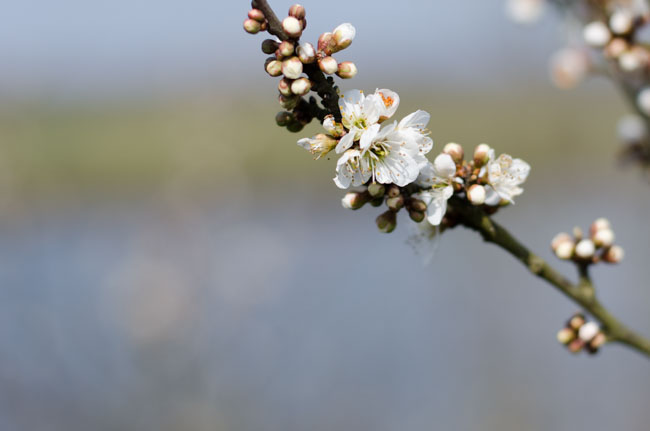 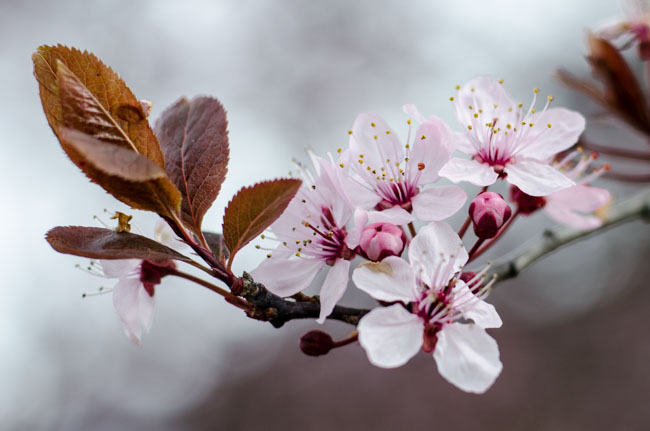 While bokeh is here, the background at the top of the photo is virtually the same as the petals of the flowers. With not enough contrast, the subject is lost. It would be better to recompose the photo to include the blue sky or the green grass. A dark background won't work here, because of the dark branch at the bottom of the photo.

Note that entirely flat backgrounds may look boring. For instance, on the next photo, it is unclear if the background is actual grass or an artificial background: 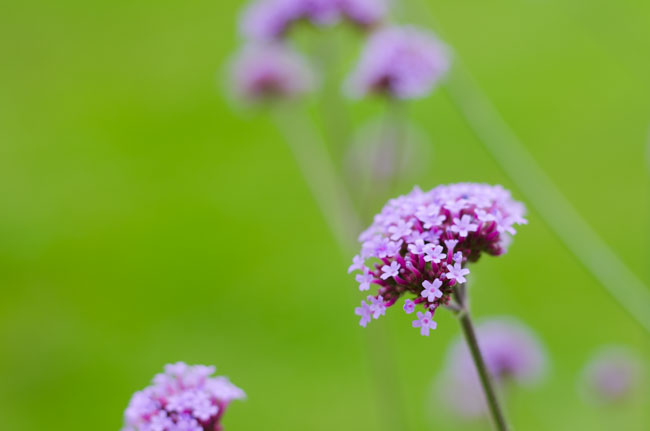 Poor composition and the annoying out-of-focus flower in the top middle of the photo make the photo even worse.

When using 𝑓/2.8 or a larger aperture, it is essential to keep most of your subject in focus. Out-of-focus flowers which fill a large part of the photo should be avoided. In general, blurry elements which are closer to the camera compared to the in-focus subject look wrong, but if they are further away, it may look OK.¹

For instance, the next photo is an example of wrong focus: the flower in the middle of the photo is blurry, which makes the whole photo look blurry and badly done. However, the flowers on the right side don't look particularly wrong, since they are further from the camera and are at the edge of the photo. 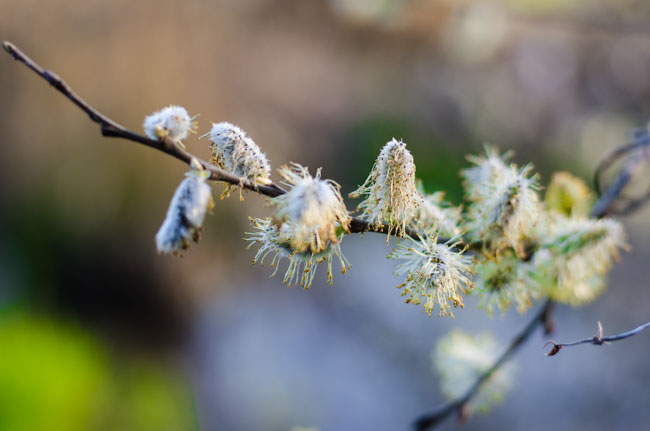 Too much is too much

It's also better in general to avoid shooting too many flowers at the same time.

For instance, in the following photo, colors are nice, but there is absolutely no subject to focus on.

It might be more interesting to focus on individual flowers, and compose the background with both the dark leaves from the center of the photo and the yellow flowers behind them. The leaves will give enough contrast between the in-focus flowers and the yellow bokeh. This would bring another benefit of getting rid of the grayish sky at the top of the photo: since the goal here is to fill the photo with the yellow color, the sky is annoying. 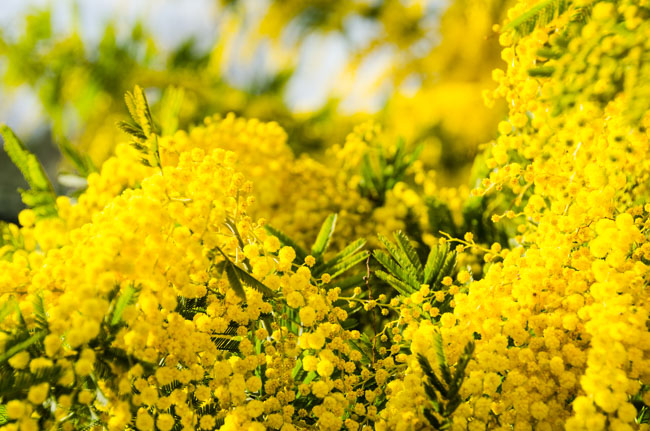 All illustrations below are from 1x. Click on each photo to go to the corresponding page.

Aside from their technical issues explained above, all the photos I've shown have one flaw: they are snapshots, not works of art.

The way you compose the shot may make a difference between a snapshot and a photograph one would like to display on a wall. You may either make the flower itself a work of art: 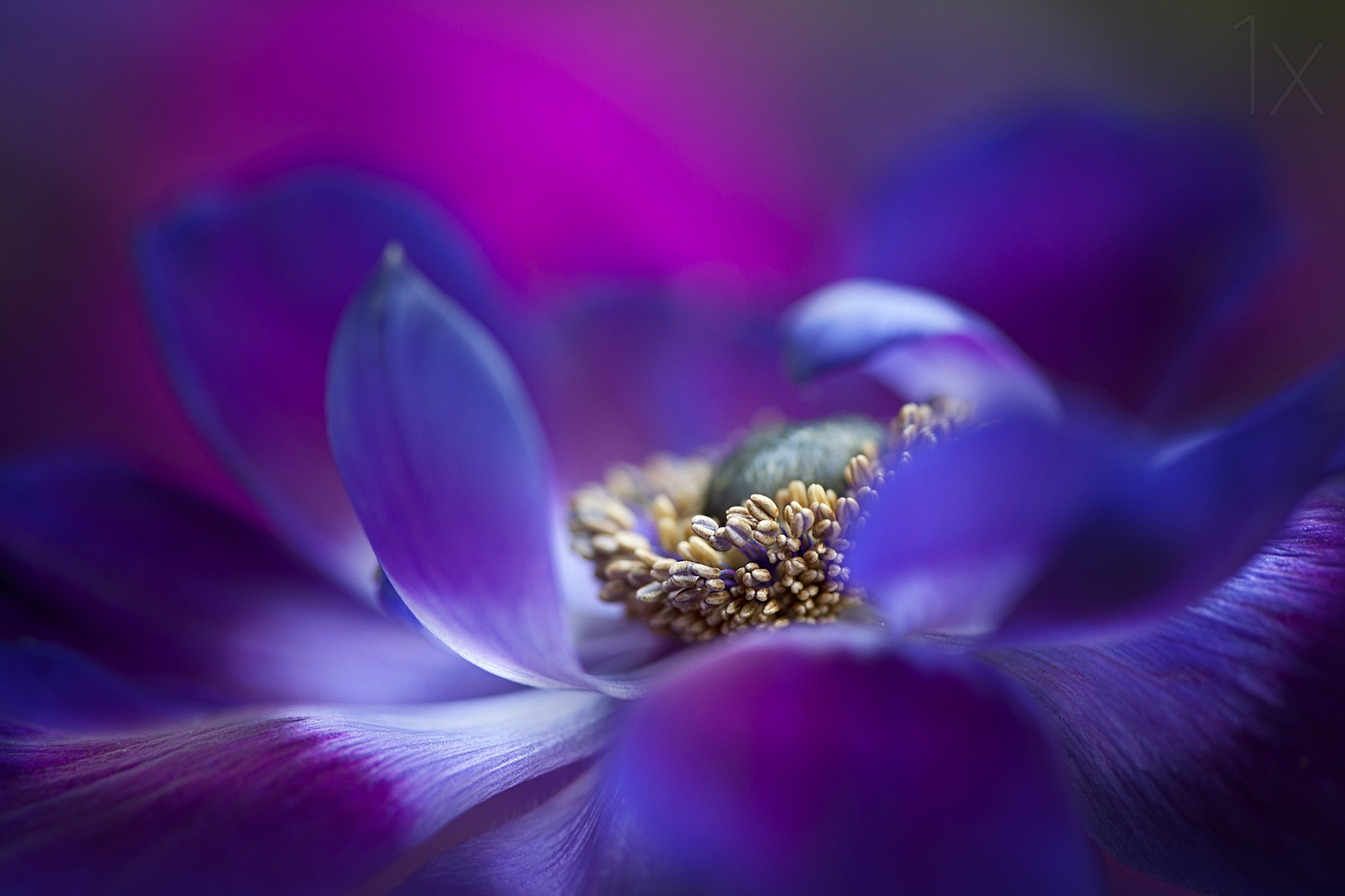 Or combine it with other elements, such as insects: 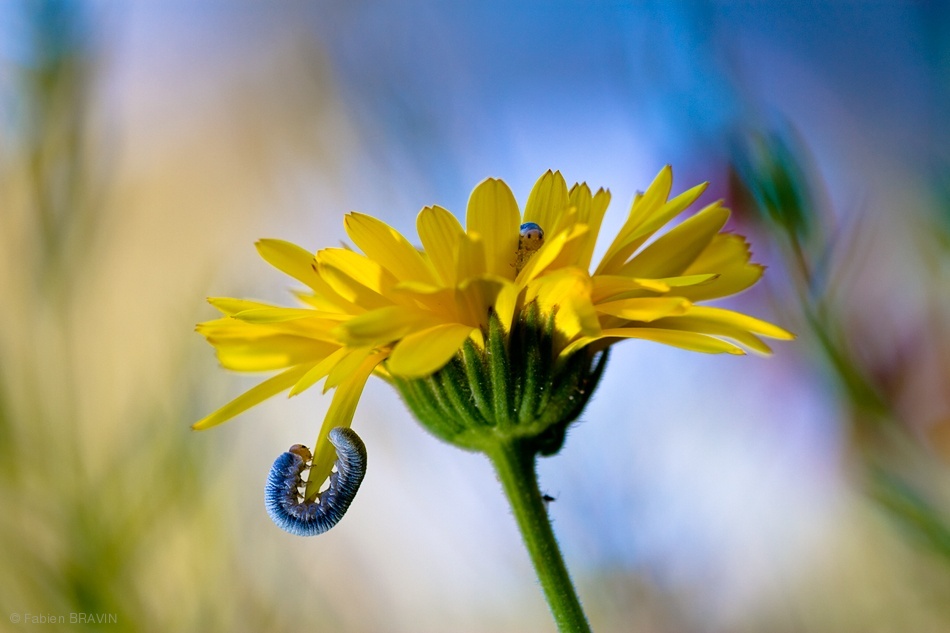 or use it as an essential part of your composition: 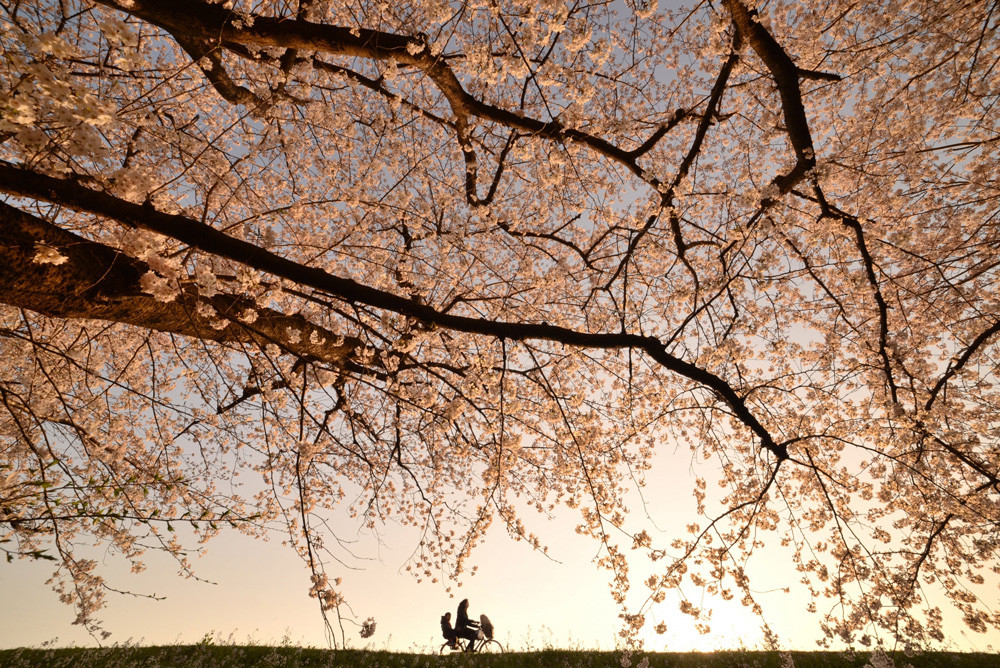 ¹ This doesn't mean you should focus on the closest object in every photo. For instance, if you are shooting portraits, you'll usually focus on the eyes, even if it means that the nose will be slightly out of focus at 𝑓/1.8.

And today it's a bright, sunny day, the sky is a brilliant blue, and there's not a cloud in sight.

One tricked I picked up along the way is an overcast sky can be the best situation for capturing the range of colors that flowers display.

With directly overhead, bright sunlight, you get strong highlights and shadows, making it harder to capture a range of colors. When it's overcast, the sky acts as a giant softbox, giving you a tighter, more subtle range.

So, the best time to photograph wildflowers is on an overcast day, because the clouds act as the perfect light diffuser: creating the most perfectly balanced light you can get.

If you can’t wait for an overcast day, cloudy days are good too: just wait for a cloud to cover the sun before taking your shot. 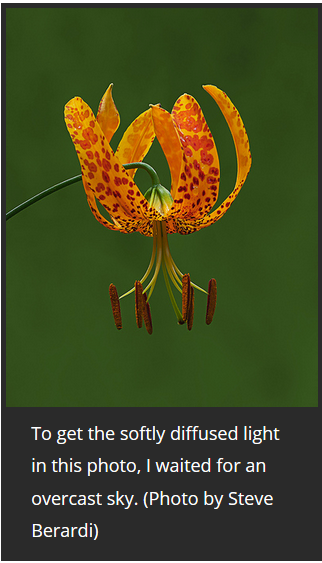 You had bright sky as background against the flowers. And you did not isolate flowers too. Isolate the flowers. Use lens at longer end. Keep aperture number low. Bokeh gives that special look to the flowers. Well lit flowers and a dark background works like a charm.

You need a bit of post processing too. Specially the Vibrancy part which will make weak colors stronger without saturating the existing strong ones.

Never knew that cherry flowers can be yellow too. Maybe I went overboard in post processing. 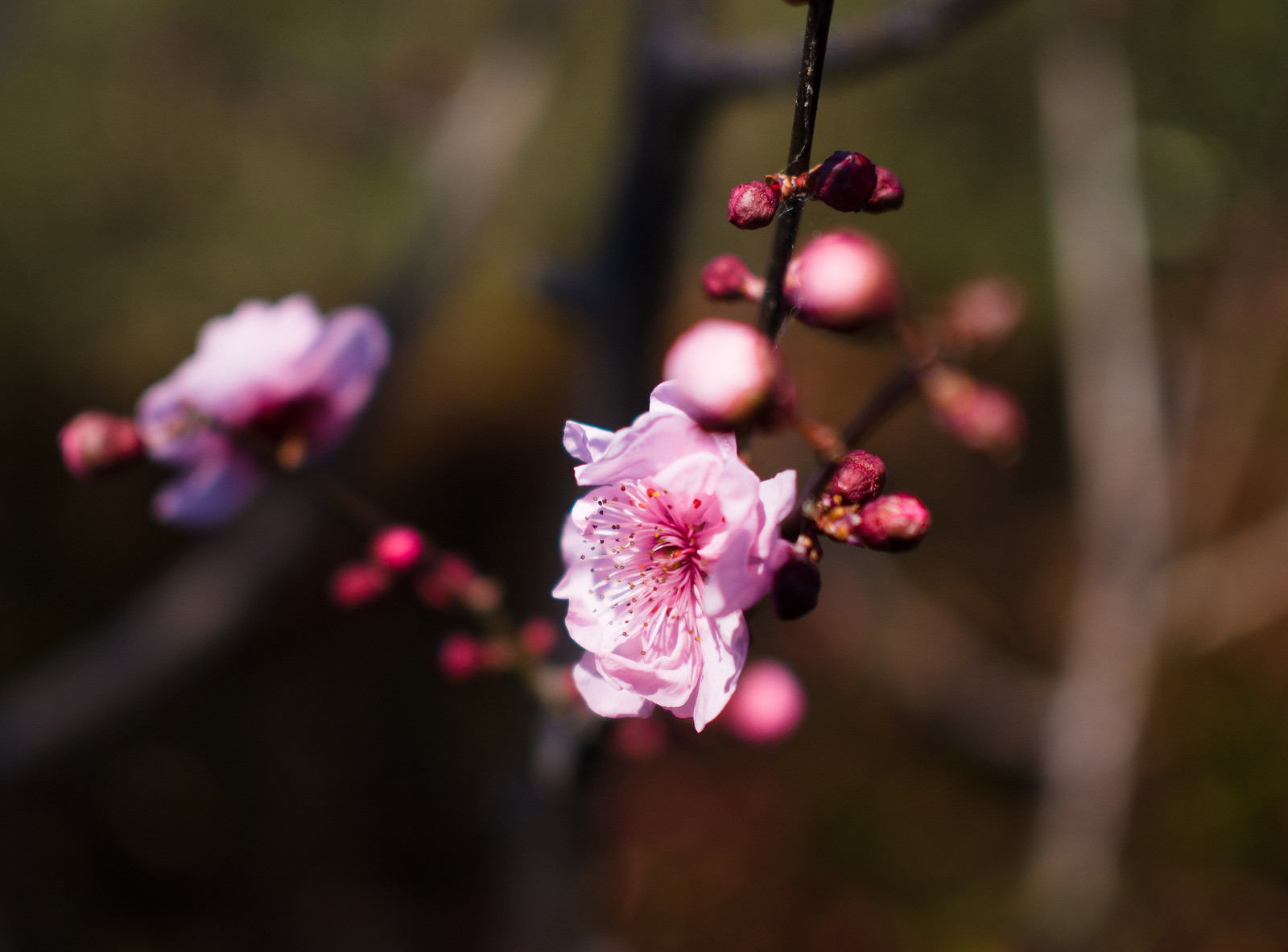 Without a clear subject, your photographs will be rubbish.

Those rules don't magically go out the window because you're photographing a plant and not people (or a building).

Look at your flower and decide what your subject should be. Is it this bloom, or that bloom? Do you want to show the whole plant? Or just a branch? If your lens can focus/zoom for macro, maybe you want the subject to be the stamen or a drop of water.

Now that you've got your subject, how do you want to compose it? If you want it minimal, see if you can move around so you've got the blue sky as a background. If you want to focus on a single flower in a bunch, you're going to need a wide open aperture. Keep going. Wider. There you go!

Maybe you want to frame your flowery subject. Or maybe you want to use the flowers to frame something else. If you have a tripod you can easily use yourself as a prop. Even if not, you can still probably hold the flower or a branch in a way that makes for a pleasing composition. (You can even do this without being in the shot. Plants are flexible - if the composition is just slightly off, you can totally fix it!)

Above all, just be thoughtful. Don't get so excited that here's such a gorgeous flower and let me spray and pray. Take a minute and plan the photograph that you actually want to capture - then go get it.

Not the answer you're looking for? Browse other questions tagged composition flowers or ask your own question.