Is there any point in ultra-high ISO for DSLR [not film]? [duplicate]

This isn't a moan - though it easily could be - but is there any real practical use for the high ISO capabilities of modern DSLRs?

Some background, as this is my first question here - I'm very new to DSLRs, having spent the past 15 years since I moved away from 35mm carrying only a phone with me for the occasional snapshot, so I'm very much behind the curve.

I have a Nikon D5500, entry-level but I'm sure sufficient for my requirements for a while yet; kit 18-55mm & a Tamron 70-300mm lens. I am fully aware of their limitations & am prepared to work within &/or around them as much as possible.
I've been using it on full manual since day one. I like to make my own decisions & check the screen afterwards, or even drop the card into my computer & look more carefully; rinse & repeat until I get it right. So much easier than in the wet film days. I shoot RAW & am aware of the possibilities & practicalities of RAW in post.

To the issue...
The entry-level lenses don't have much of an aperture, so I tend to run nearly wide open, which is only f4 at best, to shorten my DOF. Fine for artificially lit work, but I'm outdoors, starting just before sunset in November, in a wood, handheld, at ISO 100. It starts to push my limits for a steady hand as the sun goes down further - I'm OK down to about 1/40s at 70-135mm* on a static subject. By the time it's really getting quite dark I'm already using a flash to lift my foreground & I don't want to try light the scene any more, for practical reasons. I already can't get my flash to go any shorter so I have to be able to get more light in from my background to keep the balance... I reach for the ISO to be able to keep working an extra 20 minutes.

I used to use 32000 b/w back in the day & the results were 'fashionably grainy' but good.
Edit: 3200 not 32000 - which negates that argument, but I'll leave the paragraph in to highlight my earlier confusion.
After comments - I have made comparisons to my old 3200 b/w & yes, the DSLR's noise at matching figures is definitely an improvement.

I can't think of a practical use for that speed on the DSLR, the noise is just 'bad', imo, rather than even 'interesting'.
Note; I've experimented with de-noising software & have chosen Topaz as my current favourite, but it has its limits even using that.

So, my question - TL:DR is
Are there practical or artistic uses for high ISO that I have yet to discover, or is it just 'advertising hype'?

I am, of course, aware that my alternative is to light the shot, or get lenses with larger apertures, or take a tripod etc; & also that I'm actually improving SNR by using a high ISO setting, so my question isn't really "How do I fix this?" but "How do I make good use of it in low light, where it [I think] is my only choice to get enough data onto the sensor?", or even an outside possibility of "Is there something I simply haven't thought of?".

I hope this isn't considered a dupe of Is high ISO useful for photography? which I have already read. I'm aware that I'm improving my SNR at higher ISO, but I'm running out of signal against the noise. The accepted answer was also comparing to an underexposed picture, rather than one where there was no practical way to improve the exposure except to use the ISO setting.
Nor a dupe of Reducing noise in very high ISO photos as I'm already using decent noise-reduction software in post.

My further hope to differentiate this as not being a dupe is perhaps to remove the alternative of 'using it to stop fast action in otherwise reasonable light' which leaves me with 'when you run out of shutter speed & aperture & are left with the only alternative being to raise the ISO'.
It does appear to me that a lot of that amplification really isn't helping at that point.

*numbers on the dial, not APS equivalents.

I took some examples as a test. All using the Tamron 70-300mm lens at 116mm, f4.2
I started at ISO 100 & went up in steps, shortening exposure each time.
On a tripod but it gets very slightly jogged between each frame as I change settings, so they won't overlay.
Images are originally RAW, 6000x4000 but reduced to 30% & saved as jpg.
Images are shrunk on the page using <img src="" width="200"> but should be viewable at uploaded size by right clicking.
They are all pretty much 'as shot' with a very slight exposure tweak to a couple of them to balance them up.

The little guy pictured is a mask hanging on my workroom wall, light is through the nearby window, cloudy day.

The area of interest is really the top of the little guy's head & the shadow on the wall up & left of that - the low contrast area.
& yes, the guy's made out of wood, on a terracotta-coloured wall - it's not white balance issue, that's what it looks like ;-) 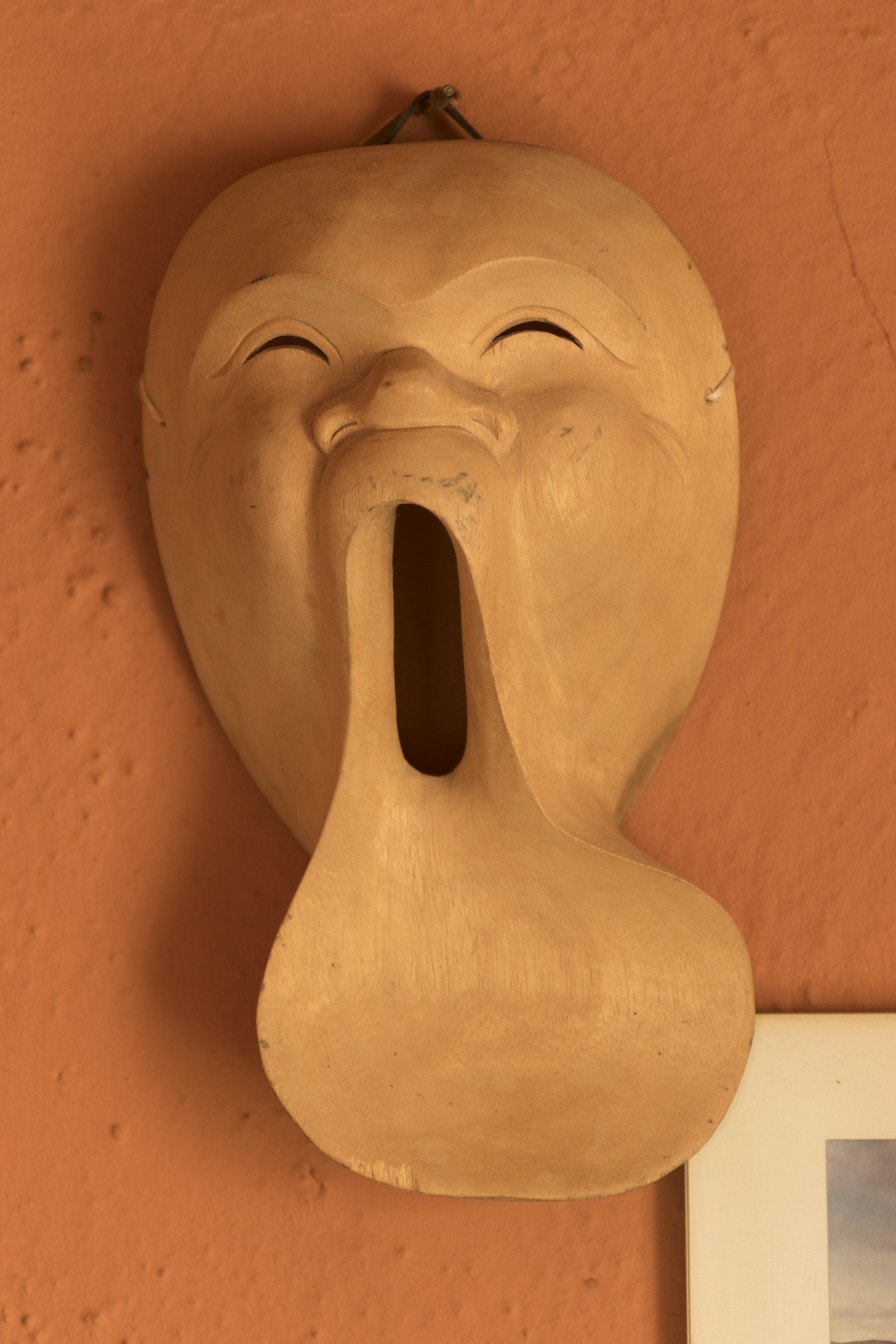 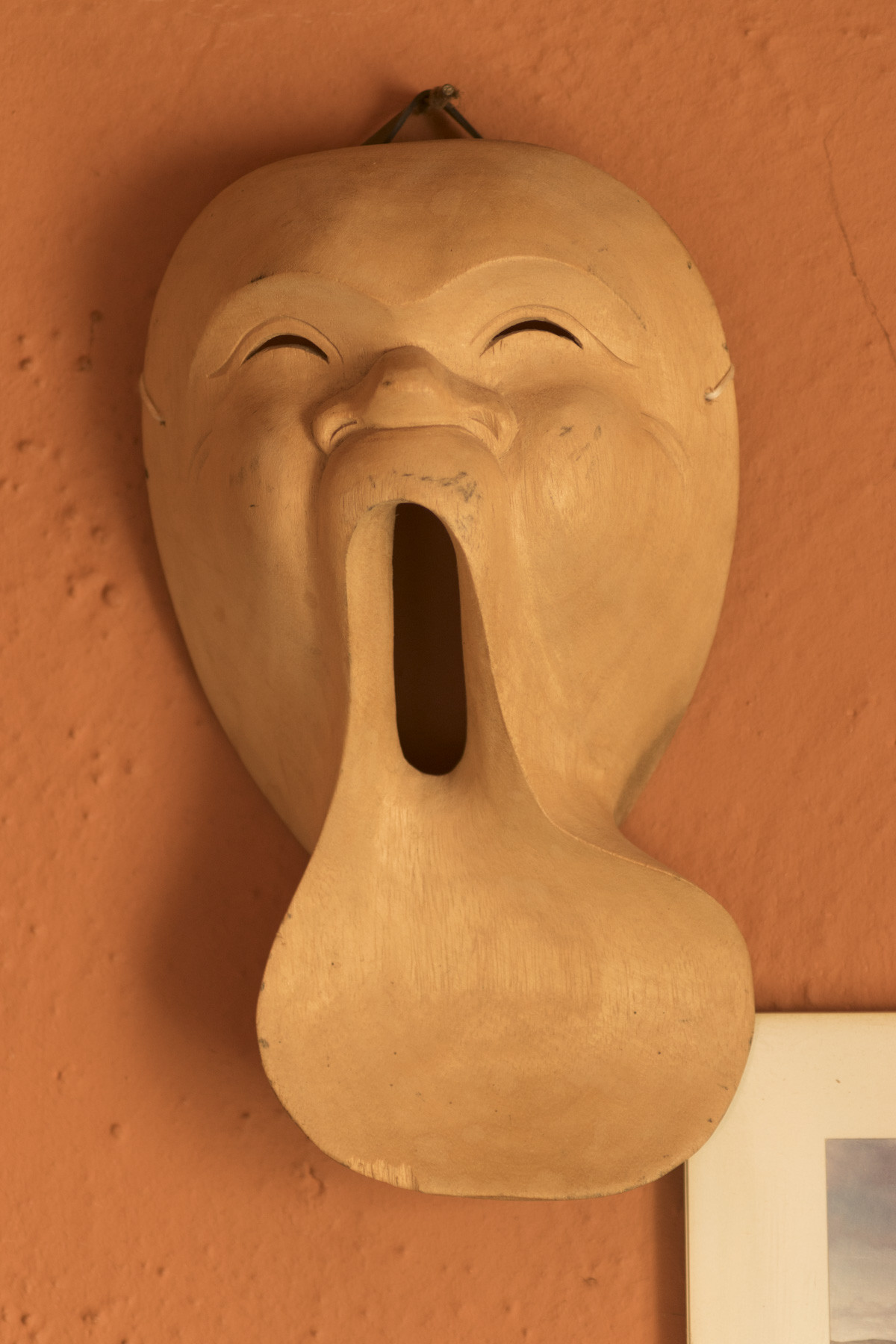 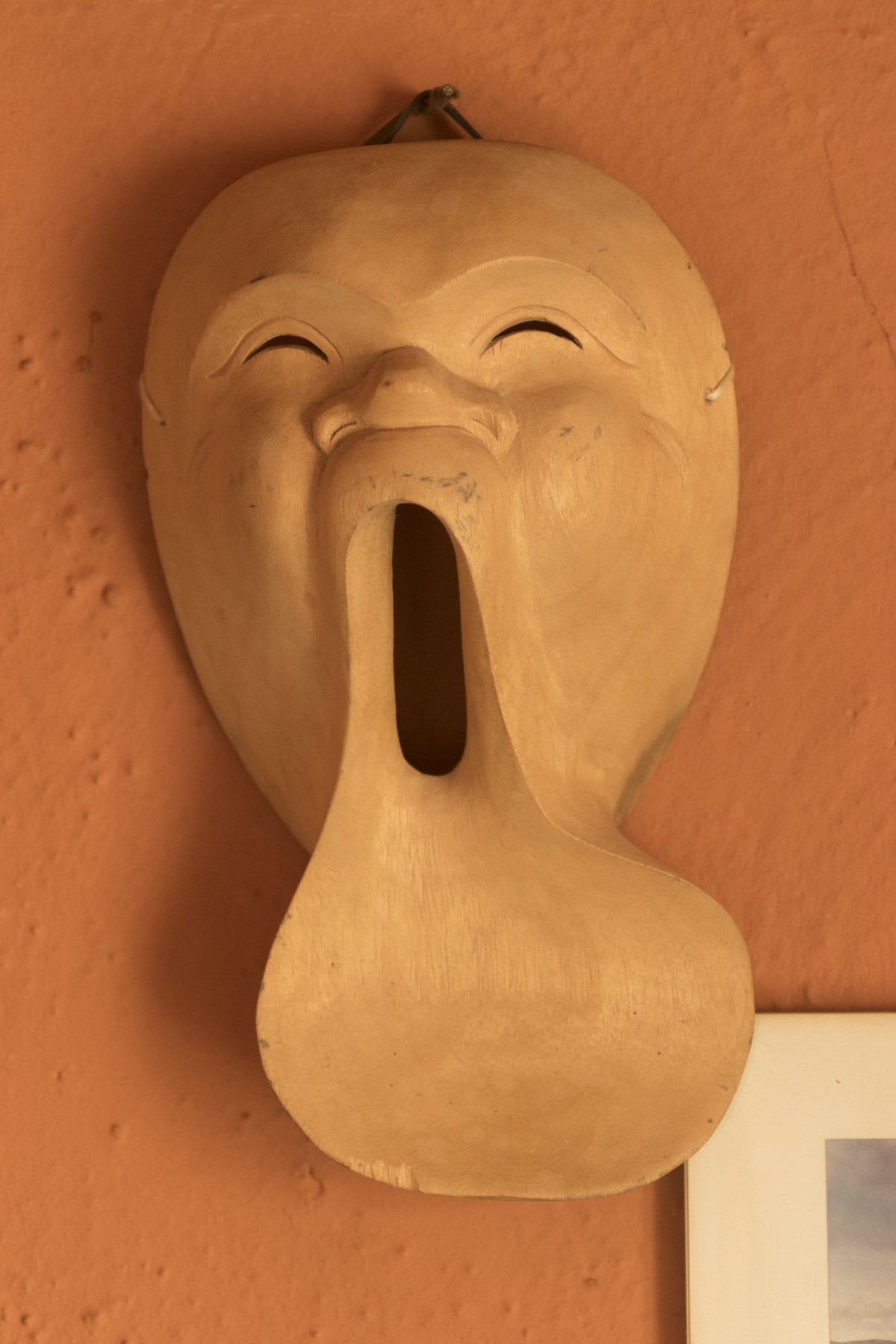 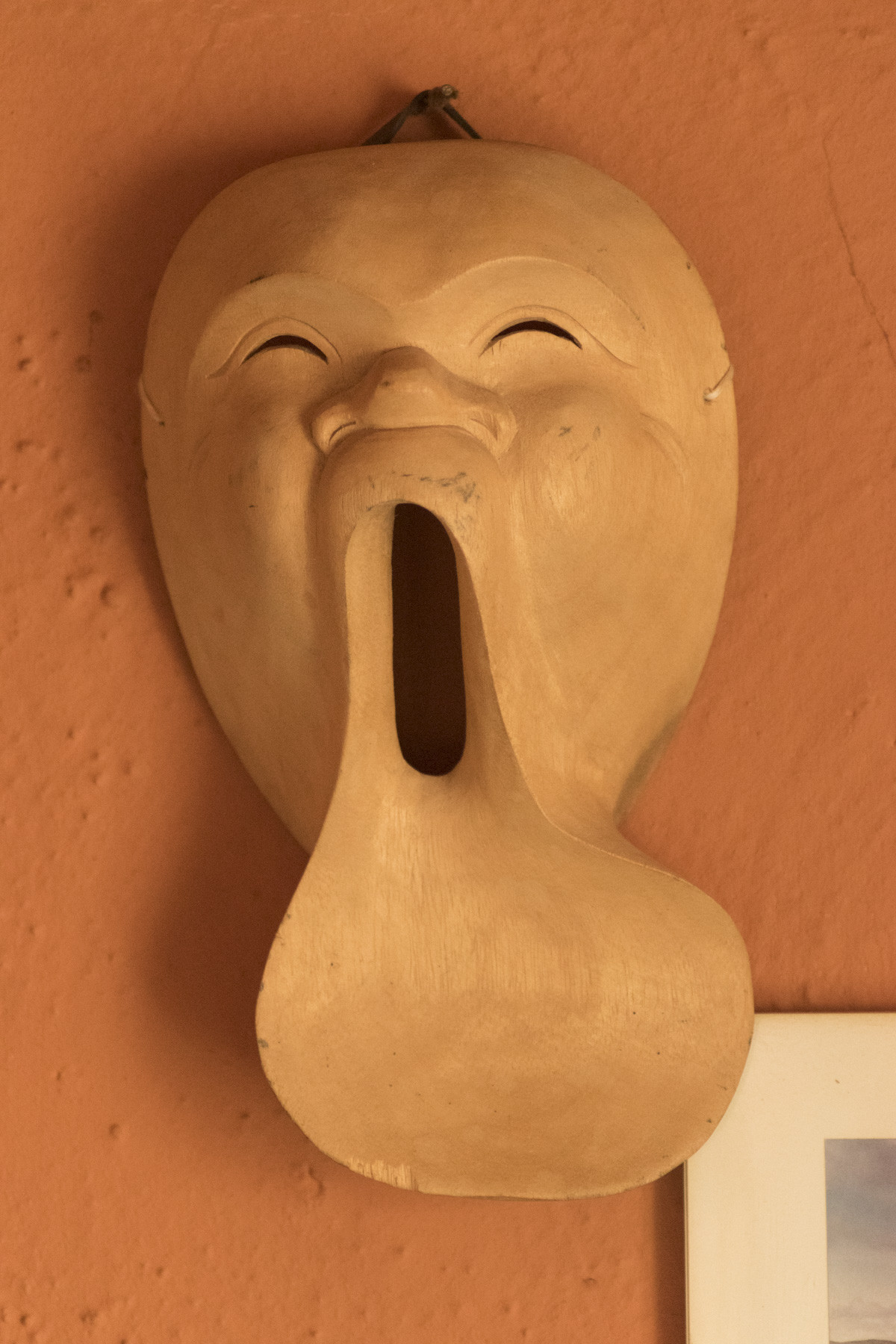 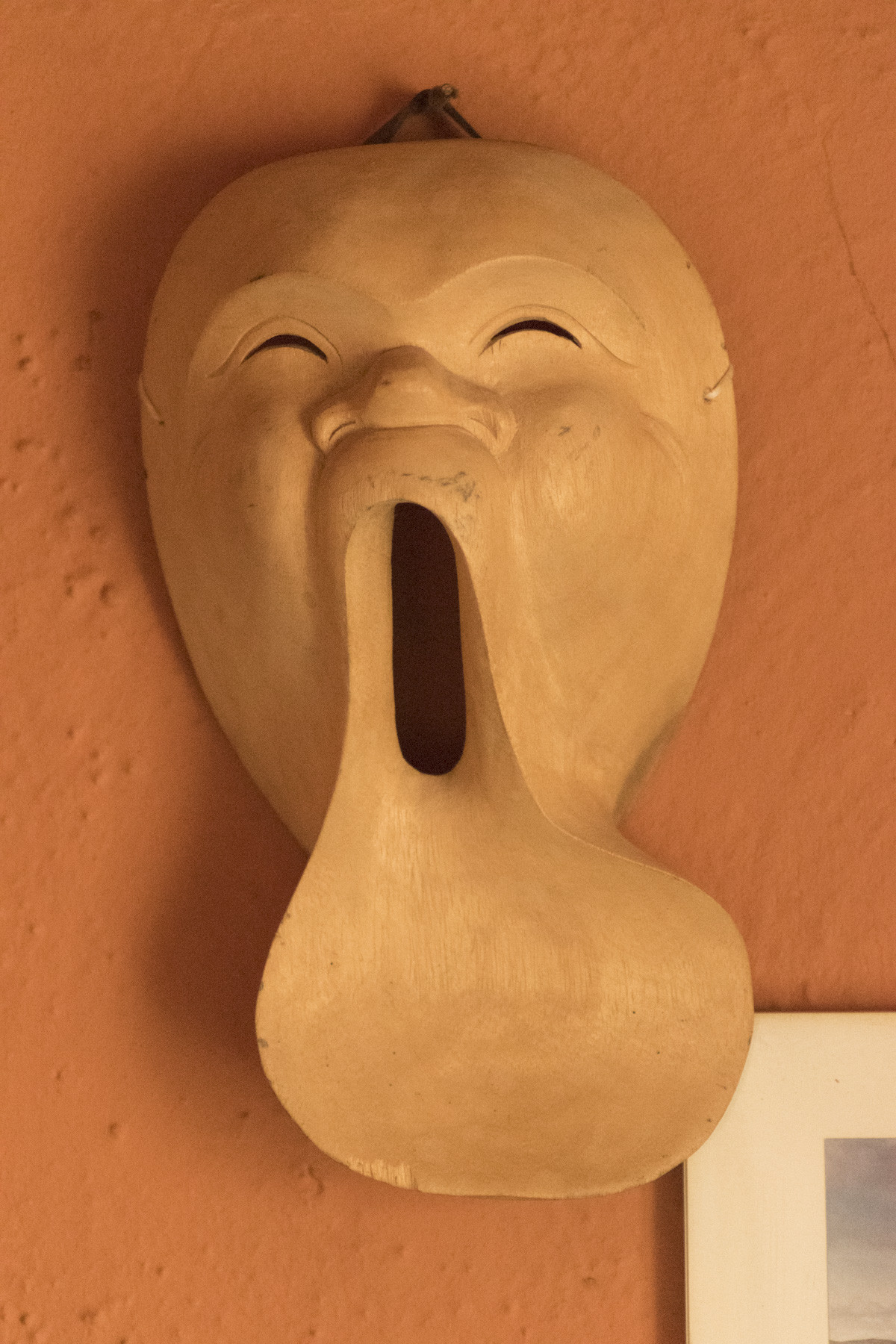 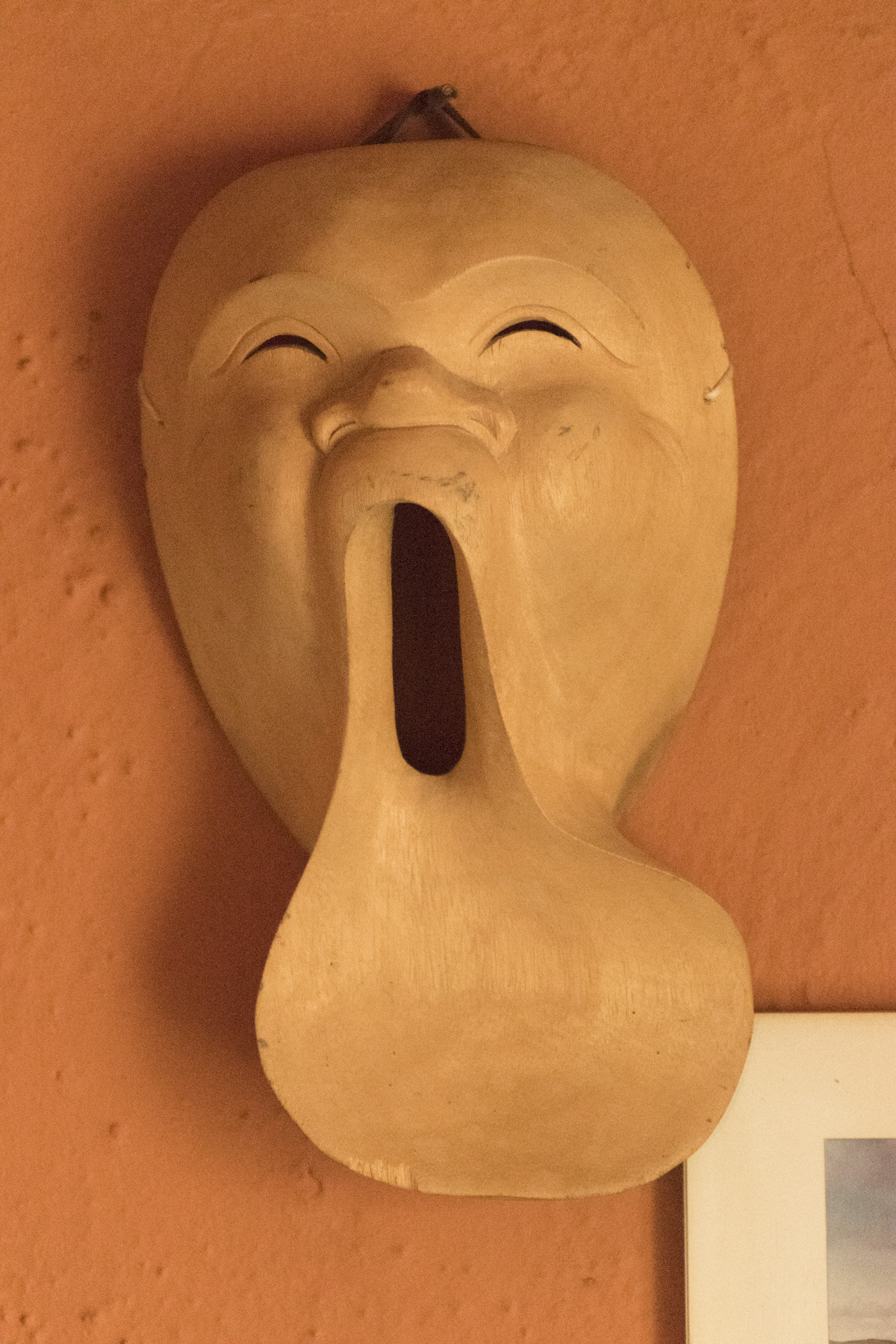 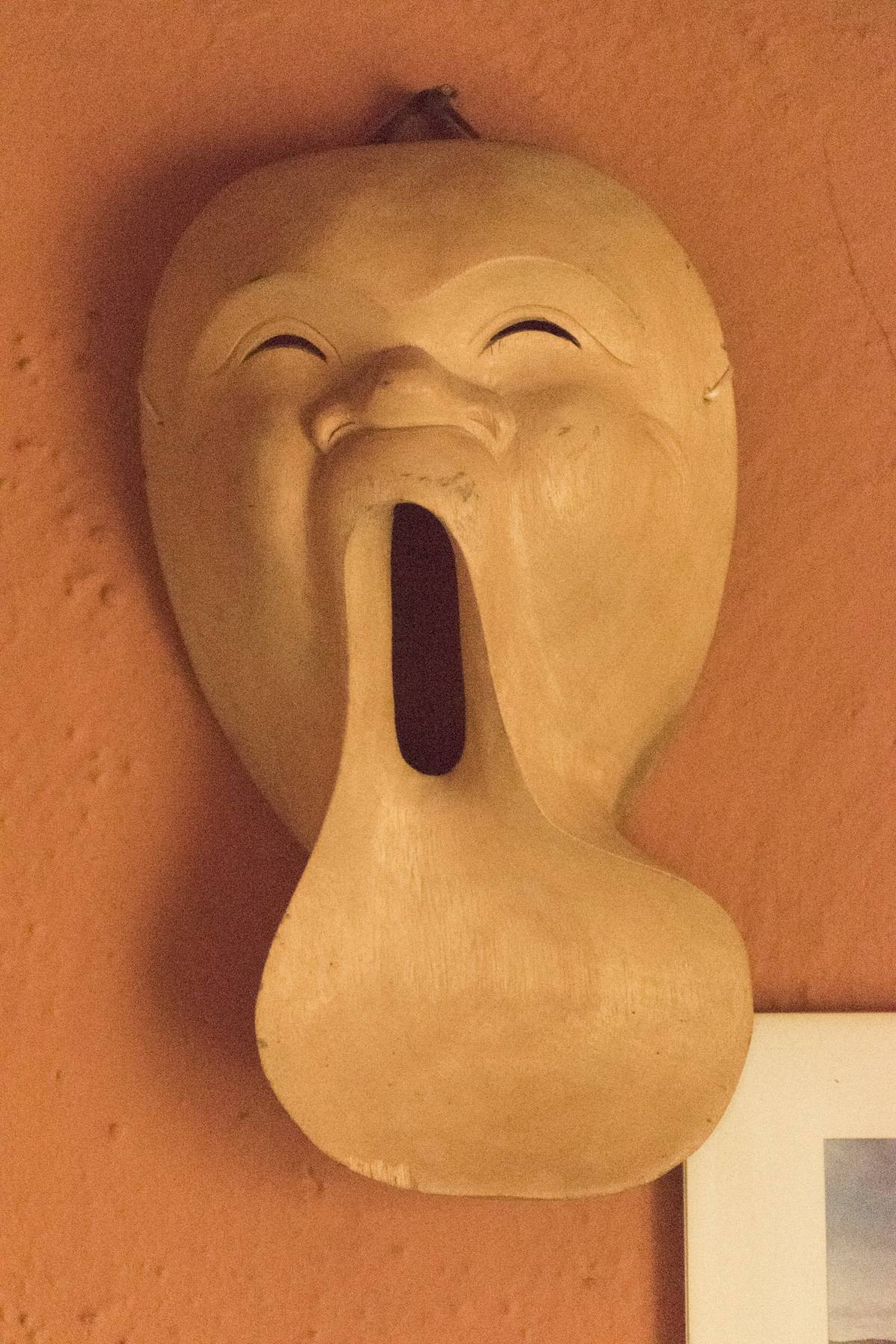 For some sort of photography high ISO is very important. At some point the picture quality does not matter as much as having at least taken a photo, even if it is very noisy.

News journalists or street photographers, who want to capture the moment do not have the time to light up the scene. Therefore they accept the noise to get the shot.

High ISO is also important in astrophotography. Depending on the focal length it is only possible to expose for a limited amount of time. (It can be extended by special mounts, but that is another topic) If the sensor is exposed to long at low ISO, one might get some star trails of the brightest objects in the sky, but most stars stay hidden the dark. With high ISO it is possible to capture the Milky Way and more. If combined with image stacking the SNR can also be enhanced.

Another use of the highest ISO settings a camera provides is to use it to adjust the camera in low light situations. If a subject is far away and the viewfinder or live view is to dark and it can not be illuminated with a flashlight, the high ISO setting can be used to make adjustments to the focus and aperture without exposing for multiple minutes, before taking the shot with low ISO and appropriate exposure settings.

Beyond the sensationalist title, I think what you are asking is simply - Are my results typical?

To which I'd answer, yes your results are typical and expected.

I don't often try to shoot in the woods, in November, right before sunset, handheld, but if I did - I would be well aware that I am pushing the capabilities of my equipment no matter if I have a f/1.4 lens or an f/4 lens. Under normal conditions I try to keep my ISO at or below 3200 at all costs, above that and the images simply don't produce the results I desire for printing. In more rare cases I will push up towards 6400 or beyond but with the understanding that those images I'm going to just capture and not be making fine art with.

In summary, I don't know what exactly qualifies as "Ultra High ISO"; but I would expect that ISO 8000 at anything larger than web sizes will be less than optimal with nearly every DSLR available today (but not all).

The higest usable ISO depends on the camera. If the maximum ISO you are willing to accept on your camera is that, that is it.

But more expensive cameras have a real usable high ISO, for example the Sony A7sII is considered the best Low light performance camera, and can go for example to ISO 400,000. https://www.google.com.mx/search?q=low+light+Sony+A7sII

But some cameras have a higher totally usless ISO, like several millions, just for marketing purposes.

I doubt your question is answerable. We only do what we think best, and other opinions won't matter to us. Also depends on how we use the camera. When you need it though.....

My opinion is that in low light situations (European cathedrals come to mind), better ISO can make all the difference. 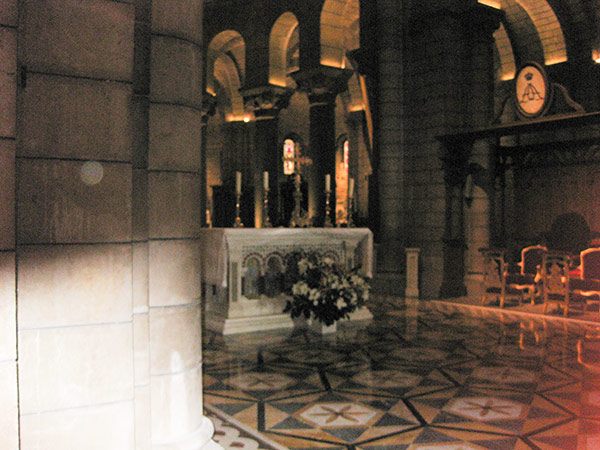 Nikon DSLR (standing beside the first) ISO 3200, point and shoot: 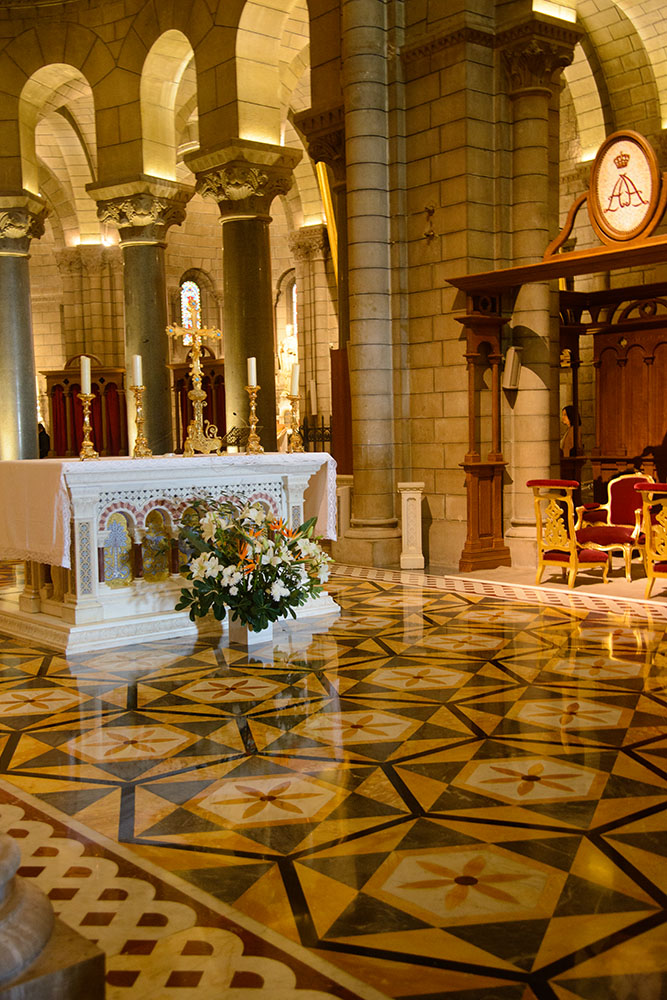 Not the answer you're looking for? Browse other questions tagged iso-noise aps-c high-iso or ask your own question.

29
Is high ISO useful for photography?
-1
What are the applications for high ISO shooting?
5
Reducing noise in very high ISO photos
-3
Why do cameras include very high ISO settings even though they are so noisy?

2
Signal:noise ratio not really decreasing with ISO for Pentax
5
Is there a technique to increase saturation in high ISO?
3
Sony a7: Is there more noise for ISO <100?
3
Better tools/techniques to merge multiple high-ISO images for noise reduction?
1
Why does my camera choose a higher ISO even when the flash is on?
1
Compact film camera to handle high iso sensitivity