A photo effect that favours yellow & blue; What is its name & how is it done with GIMP?

I have recently come across several pictures that seem to have been modified to favour or skew towards both yellow and blue tones. The photo editing effect creates a special, somewhat cosy ambiance.

Here is a nice example, with more examples at the [source]: 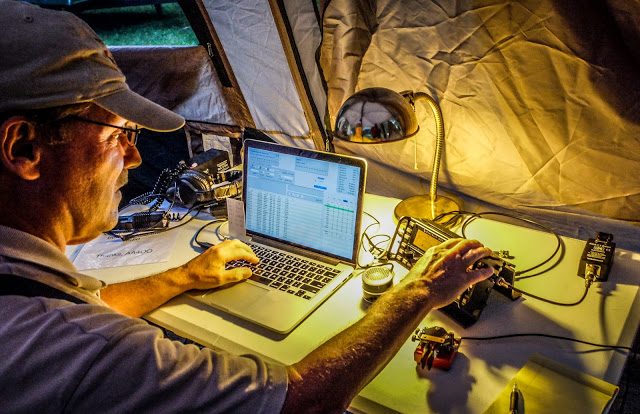 This other portrait [source] —with eyes too blue to be true— also seems to be affected.

To get the full zist and most detailed reverse-engineered solution, check out my own answer by clicking the image below. 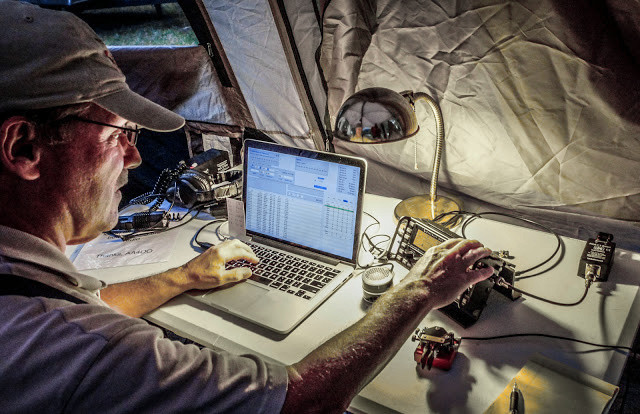 I agree with the earlier answers that the example photos primarily got that way by use of lighting rather than post-processing; and I don't have a name for an effect that enhances yellow-blue contrast, but I do have a suggestion for how to achieve the effect in the GIMP.

The key tool is a colourspace called L*a*b*. If you open your image, go to Colors | Components | Decompose, and decompose to LAB, you'll get an image with layers called L, A, and B, or three images whose titles include L, A, and B.

L is the brightness. A is the red-green channel: red is 255, green is 0. B is the yellow-blue channel: yellow is 255, blue is 0. So by using tools such as Curves and Levels from the Colors menu separately on the A and B layers you can desaturate the red-green channel and saturate the yellow-blue channel. Taken to absolute extremes (threshold B, flatten A to a uniform medium grey) on Chris H's demo image, the result is 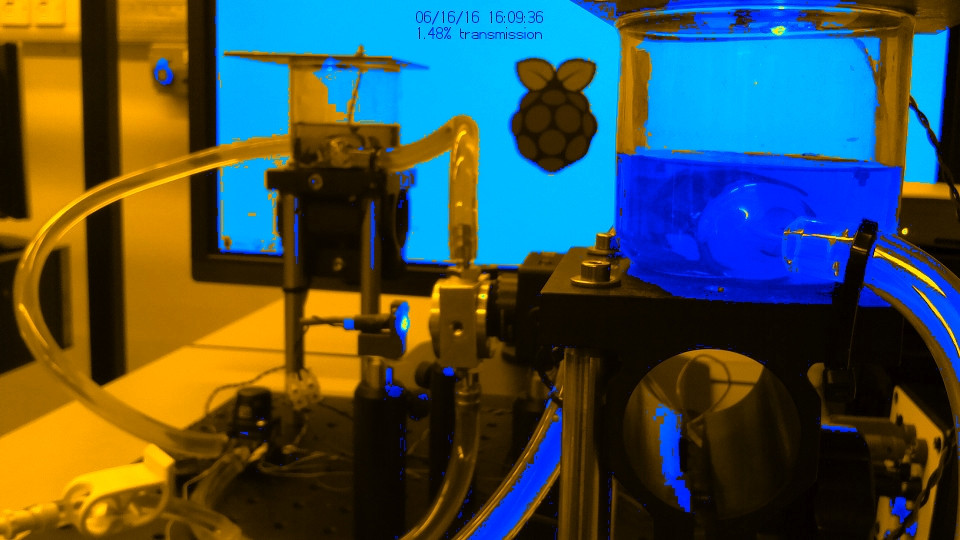 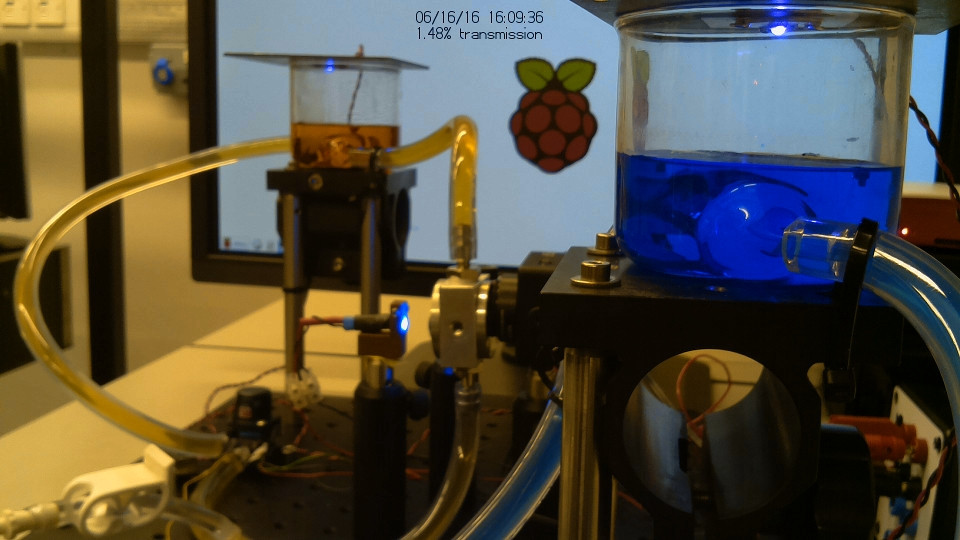 You can really notice the difference on the off-white table and wall, on the raspberry, and on the blue (copper sulphate, I'm guessing) liquid.

All of the example photos could have been made without any selective processing with regard to color temperature/white balance. They all look like they were made with several different types of light sources in the scene. If one light source is very orange and the other is very blue, the camera will see the difference much more so than our own eye/brain systems will.

In any of the below images were the color temperature and white balance set at a point in between the two light sources (rather to make one or the other look "white") the warmer one would look yellow/orange and the cooler one would look blue. If the color saturation were increased the differences would be even more notable.

When corrected for the very limited spectrum orange vapor lights (well beneath 2000K which necessitated use of the color picker) under the stands the light on the field looks very blue. 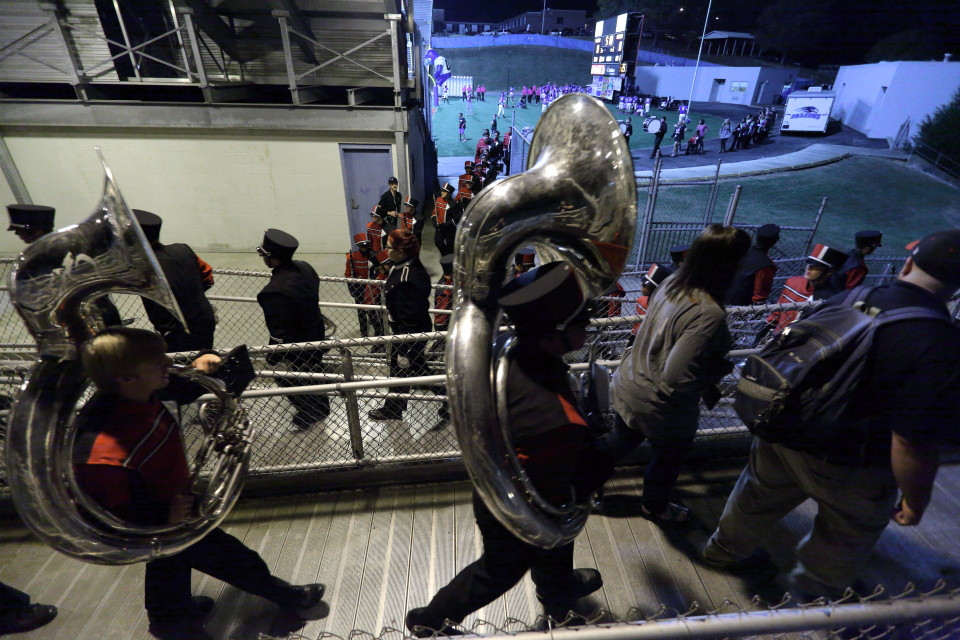 Yet when properly balancing color for the lights on the field at 3600K the color looks very natural. 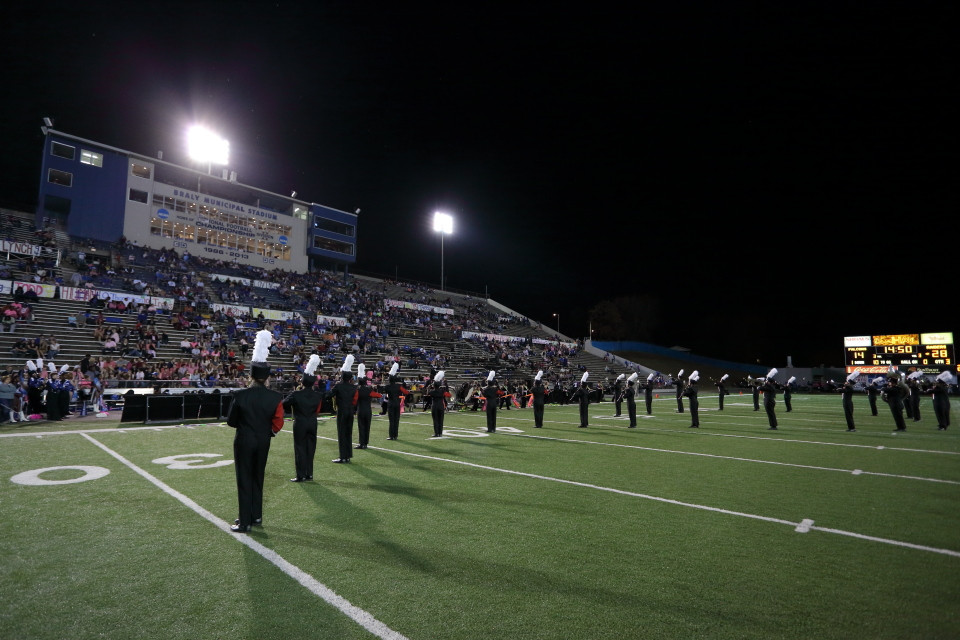 Again, look at the press box as viewed with the white balance adjusted for the orange lights. 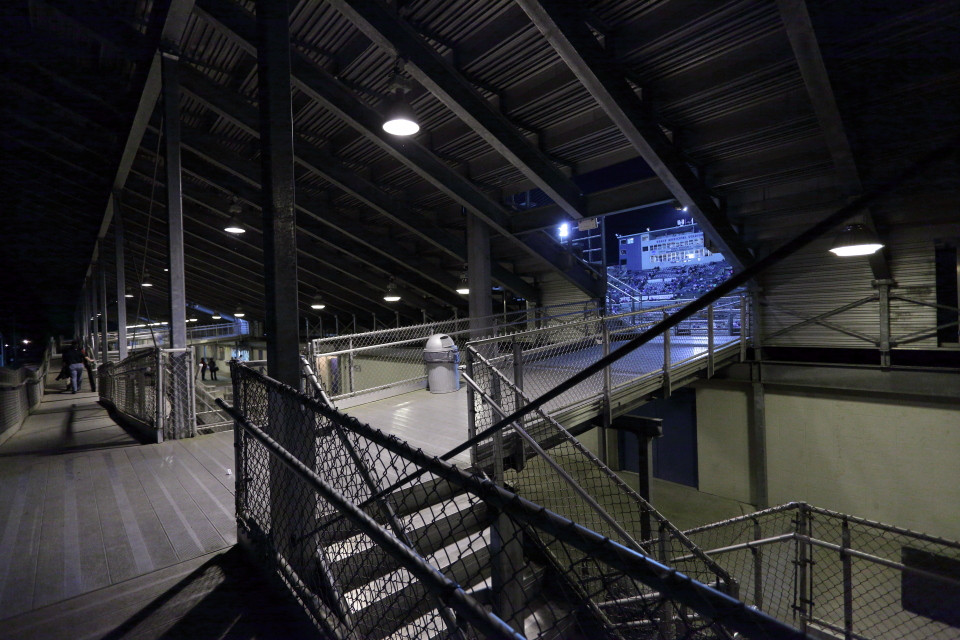 Now look at the same photo with the color temperature of 3600K used for the photo taken on the field's surface applied. 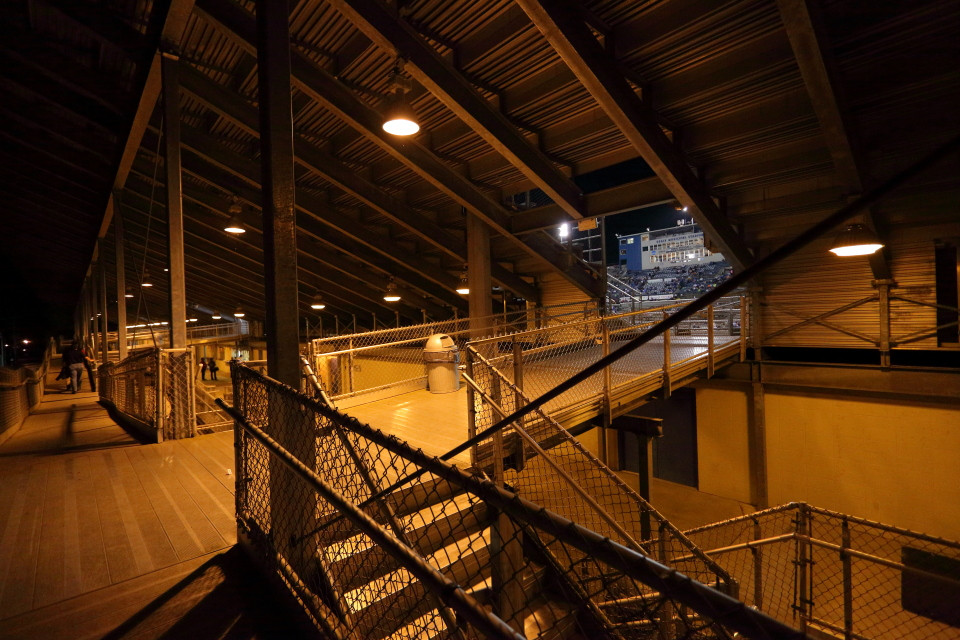 That is not an effect. That is a trend.

The trend is to use complementary colors, and there is not much room to choose from. It is either green to magenta, yellow to blue or red to cyan.

In reality that is an orange to blue color grading trend.

In movies it is called color grading, and this specific combination is based on some color theory principles of augmenting the chromatic contrast. This trend is more dramatic on action films, and for example in dark horror films the trend is on the contrary, less saturated colors, specially grays and cold blues (Except red if you expect a gore film.)

The first image of the question also has a tone mapping, which is a contrasted image from saturated to black. This tone mapping is sometimes called "HDRI" effect or look.

Michael Clark also has a good point, where this specific color combination is based on light temperature. Exaggerating this color hues tries to give a more emotional look, including warmth and cold, which is a basic sensation on us humans, and sometimes triggered psychologically by visual stimulation.

On Gimp you can mask some zones and move or adjust the curves.

Additionally, you can work only on the highlights moving just the upper part of the curves, and on the shadows moving only the dark parts.

But probably a good starting point, as this is a photography forum, to put color gels on some light sources in the first place, or using different temperature light sources, for example, cool and warm fluorescent lamps.

Here's another approach. My test image was taken on a PiCam (camera board for the Raspberry Pi) as part of a timelapse. The camera has a rather wide fixed aperture and a small sensor, so the depth of focus is quite low.

This is the original, as shot. The ambient light is fluorescent, but I picked it because of the monitor vs ambient contrast in the first example image. 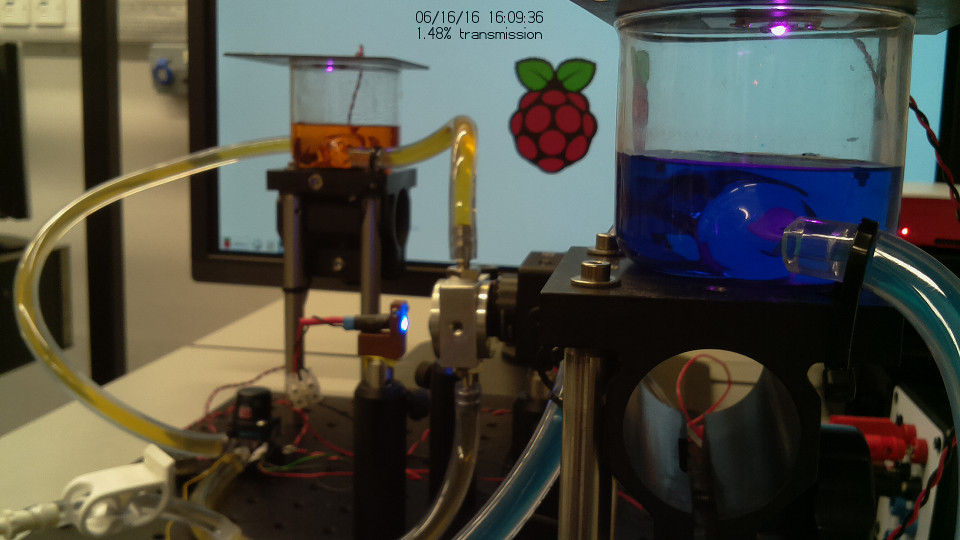 After processing I have: 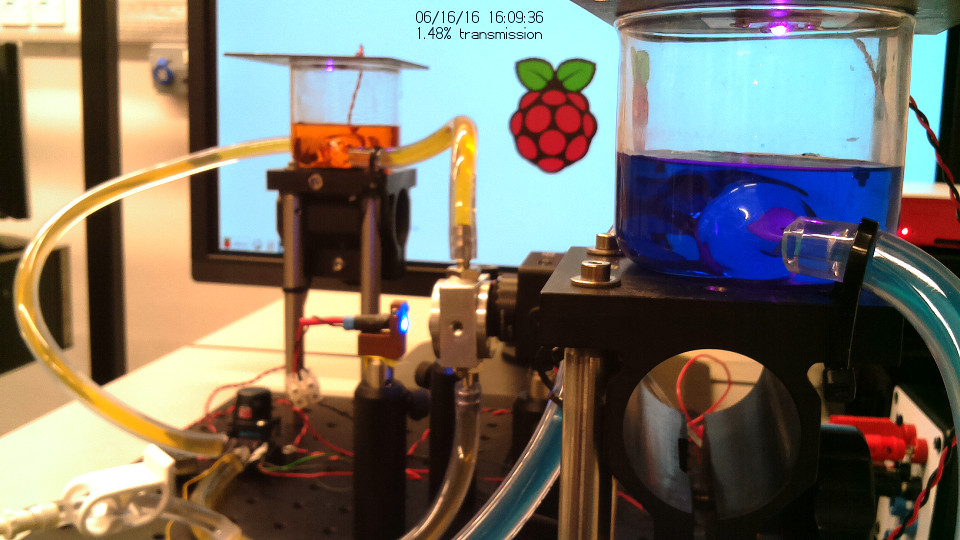 The bottom layer of the image is the original, with a white point selected (levels dialogue) from the monitor. The top layer is the same, but with the white point chosen on the benchtop (this is actually grey so this step also increased the overall brightness). The upper layer has a layer mask made from the blue channel of the original, with the contrast increased significantly. 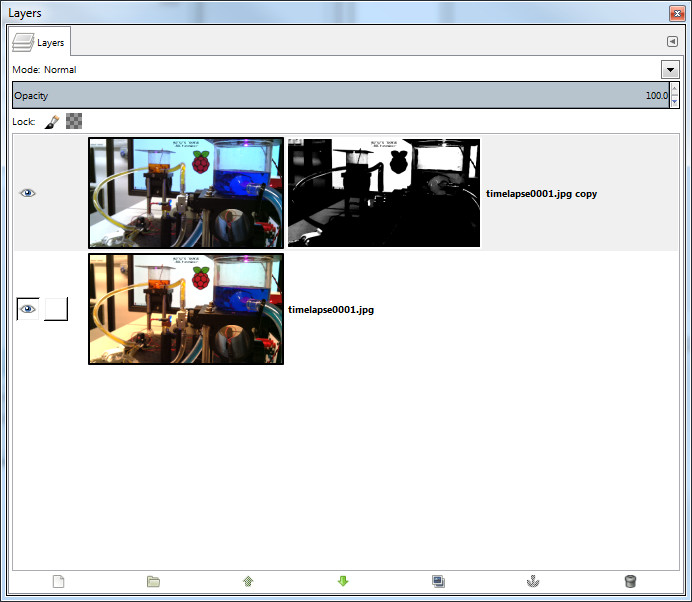 Peter Taylor clearly is onto something, by referencing the L*a*b* colour space. The multiple asterisks refer to the CIE 1976 version of this colour space. 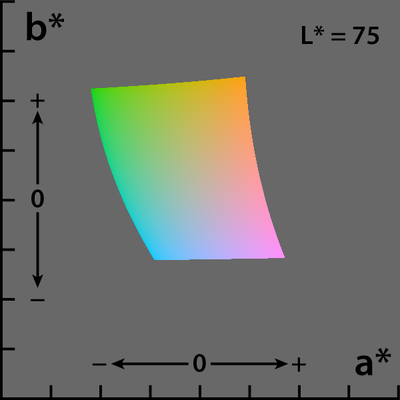 Decomposing the image of the ham radio operator in this colour space shows evidence of what appears to be serious gating/filtering in the histograms of both the a* (green=0 ↔ red=255) and, more importantly, the b* (blue=0 ↔ yellow=255) channel. (The L* channel is for lightness.) 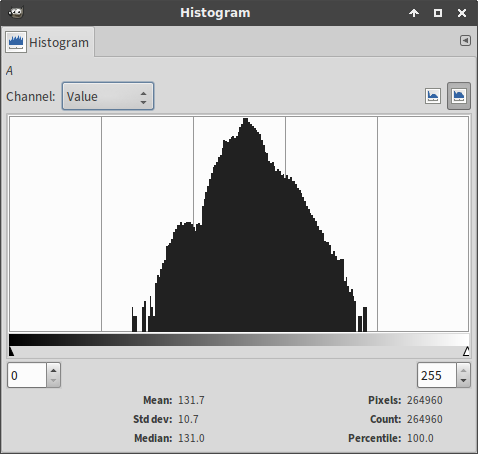 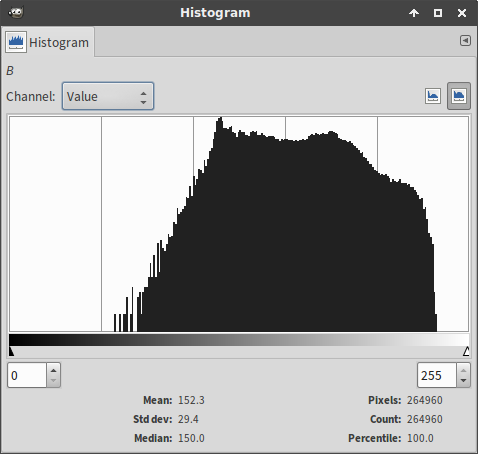 In GIMP, this decomposition is obtained by clicking on Colors → Components → Decompose… → Lab.

Please, notice that throughout this exposé, linear histograms will be used as oposed to logarithmic scale histograms. In GIMP, switching between scales is done by hitting the rightmost button right above the histrogram.

Reverting the b* channel

Here is what the b* channel originally looks like. 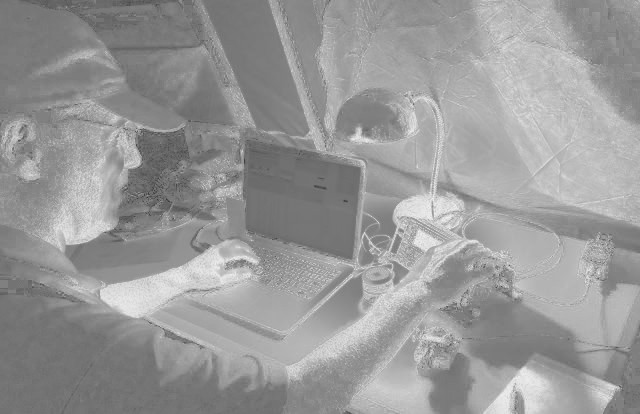 In GIMP, select from the menu Colors → Curves.. and apply the following transfer function on the b* channel. Be careful to operate exclusively on the right side of the linear histogram, which affects only yellow tones. 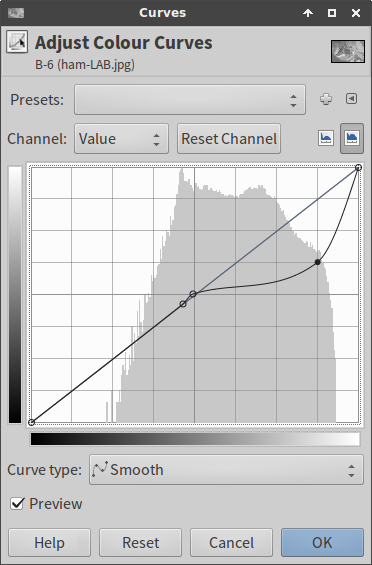 The reverted b* channel will now look like this. There are less bright spots, indicative of fewer amount of yellow tones in the image. 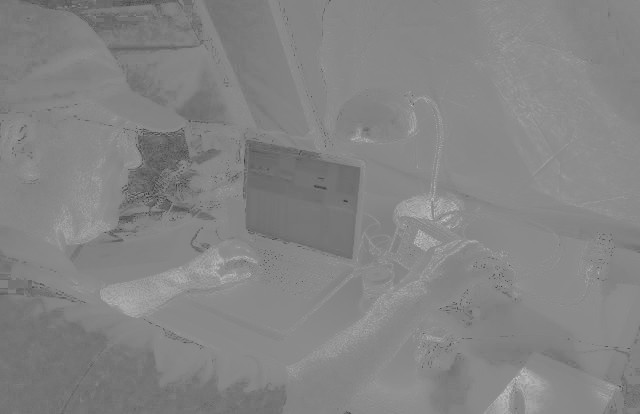 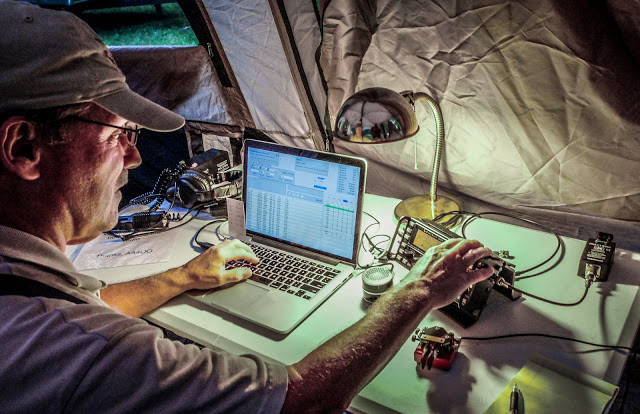 Reverting the a* channel

In the image above, there is still a spot of cyan on the desk and the grass through the open tent window looks unnatural. Both observations indicate that the a* channel also requires remedying, albeit to a lesser extent.

Here is what the a* channel looks like originally. The spot of grass indeed looks exceptionally dark in this channel. 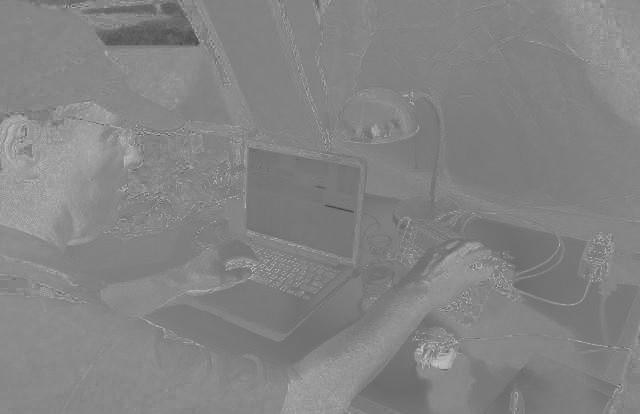 Apply the following transfer function on the a* channel values. Again, be careful to operate exclusively on the left side of the linear histogram. Doing so, will affect only the green tones. 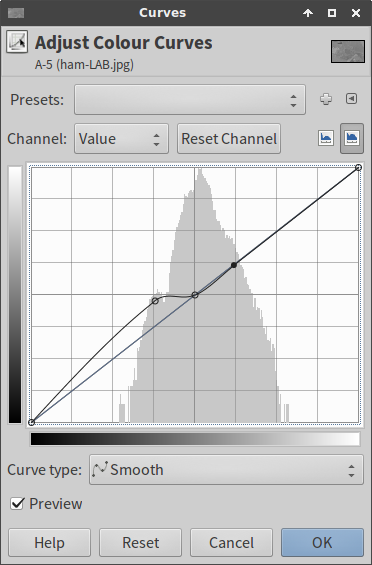 The reverted a* channel will now look like this. Both the grass and the desk now show less contrast in this channel. 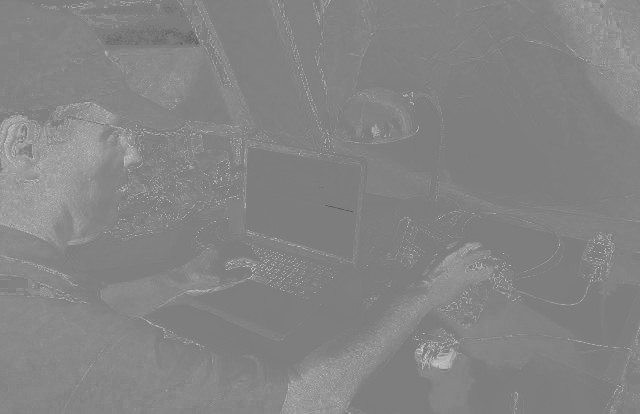 Colors → Components → Recompose ends up with this result. Notice how the grass now looks natural and the cyan spot on the desk has disappeared. However, the yellow pad remained bright yellow as did the brass of the lamp stand. The LCD window on the radio is orange, as should be on this radio model. The base of the morse code keyer remained red.

This result could not be obtained simply by chosing a new white balance spot anywhere on the picture, as previously suggested.

Not the answer you're looking for? Browse other questions tagged photo-editing color effect gimp or ask your own question.

9
What's the difference between “Fake HDR” and real, bracketed exposure HDR?
17
What is the easiest way to alter white balance in Gimp?

15
How can I remove the background of a photo using GIMP?
3
How can this lighting/color effect be done?
6
How to achieve Japanese-painting like effect with Gimp?
3
How to calculate mean/average photo color in GIMP?
7
Double exposure photo with Gimp
0
How was the twilight blue color effect in this photo produced?
2
Haze effect in moon photo? (using GIMP)
4
How do I create a split-tone effect using GIMP?
0
What effect is this? Like an outdoors shot with sunlight with a lot of yellow hues
2
What is this effect with blue and yellow color shifts around objects?