Hi to all Canon Digital Photo Professional users out there. I have been using DPP for years with no issues. Recently I updated my install to version 4. Now, it no longer auto rotates photos taken in landscape mode (either in the preview screen or when converted).

I still have DPP3 (v3.14.48.0) installed, so I've opened the same folder of recently-downloaded photos in that, and in the newest version (DPP 4.5.0). In DPP v3 the photos are nicely auto rotated. In DPP 4 they are not. Similarly, the jpgs created by DPP4 are not rotated.

I have been through the preferences in DPP and I can't find an option to change.

Does anyone else have this issue, and can anyone point me to a solution?

FYI, this is on a Mac, running Sierra.

I don't have a recipe auto applied, although when I've finished the import I do "Read and paste recipe from file" to everything.

With DPP 4, if the recipe you are pasting to all images contains instructions for image rotation, all of the images are being modified from their in-camera setting. Their rotation is changed to match the way the image used to create the recipe was displayed when the recipe was created.

By default Digital Photo Professional 4 includes cropping and rotations applied to an image, along with all other settings used in all the various tabs of the entire tool palette, when a recipe is copied from an image using the copy recipe (Control+Alt+C in Windows) command. This is a change from DPP 3 and earlier versions when only some of those options were included in a copied/saved recipe. If one uses the copy selected recipe (Ctrl+Shift+C in Windows) command, only the items selected under the Select and copy recipe settings option are included in the recipes. Any values, such as cropping and rotation, that are not specified in the recipe are left at the value already contained in the metadata by the image.

In Windows all of these option are presented in the context menu that appears when right-clicking on a photo in the Edit window of DPP. 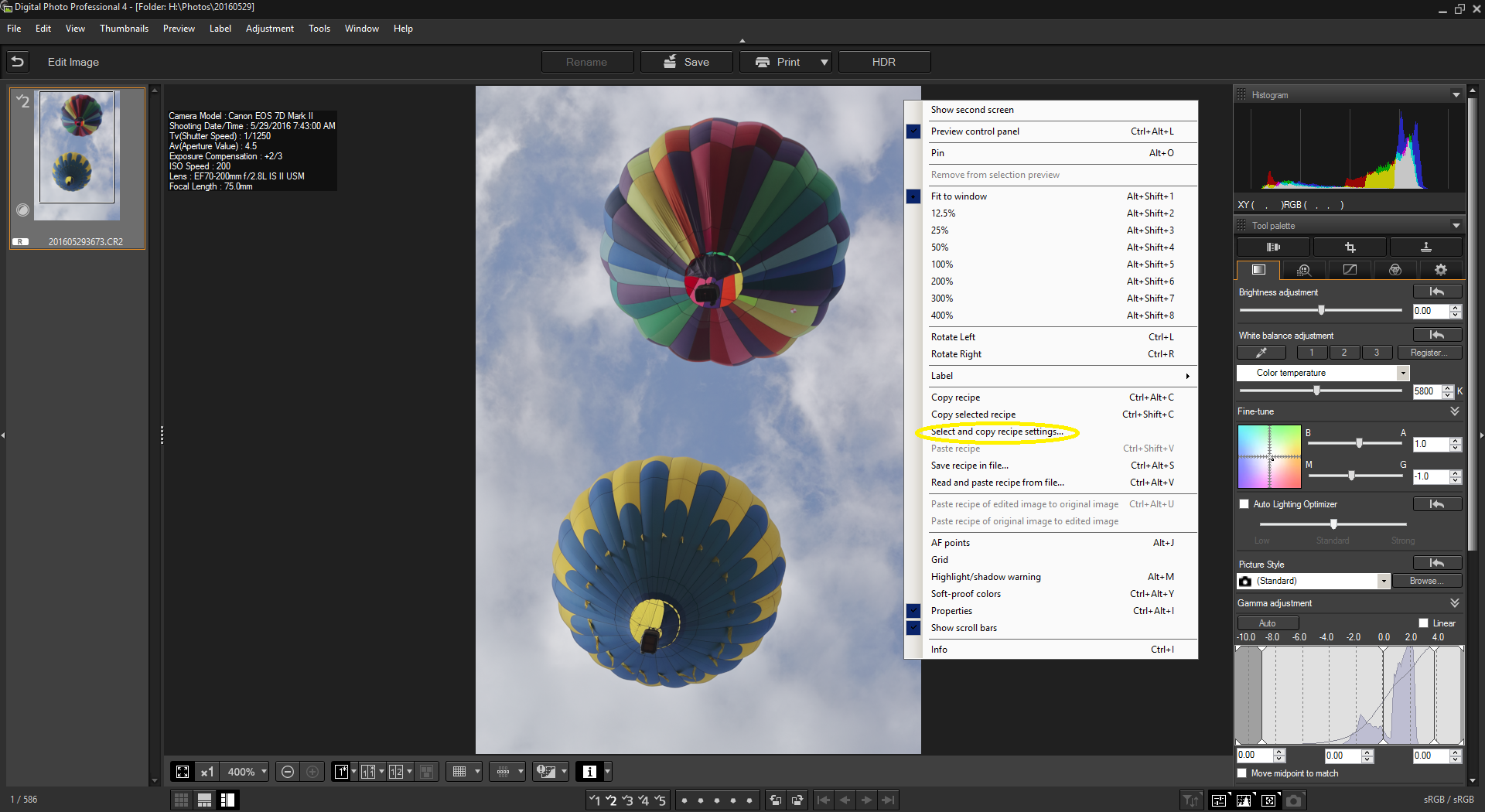 They are also available under the Edit Menu. 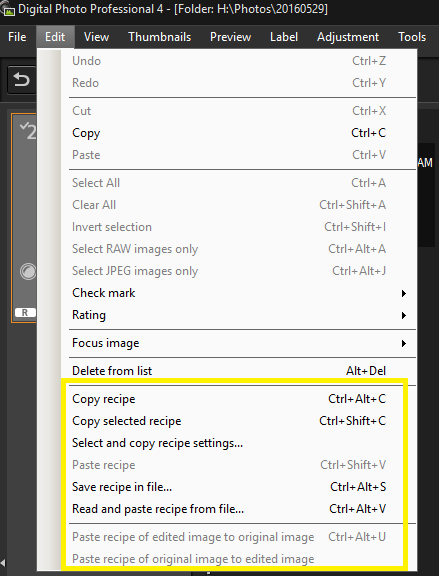 Likewise, when one saves a recipe as a template using the Save recipe in file (Ctrl+Alt+S in Windows) in the resulting dialogue box there are two radio buttons near the bottom that allow you to save all details of the recipe or only the selected details. To the right of the radio buttons is a button that opens a dialogue box that is the same as the "Select and copy recipe settings* option. 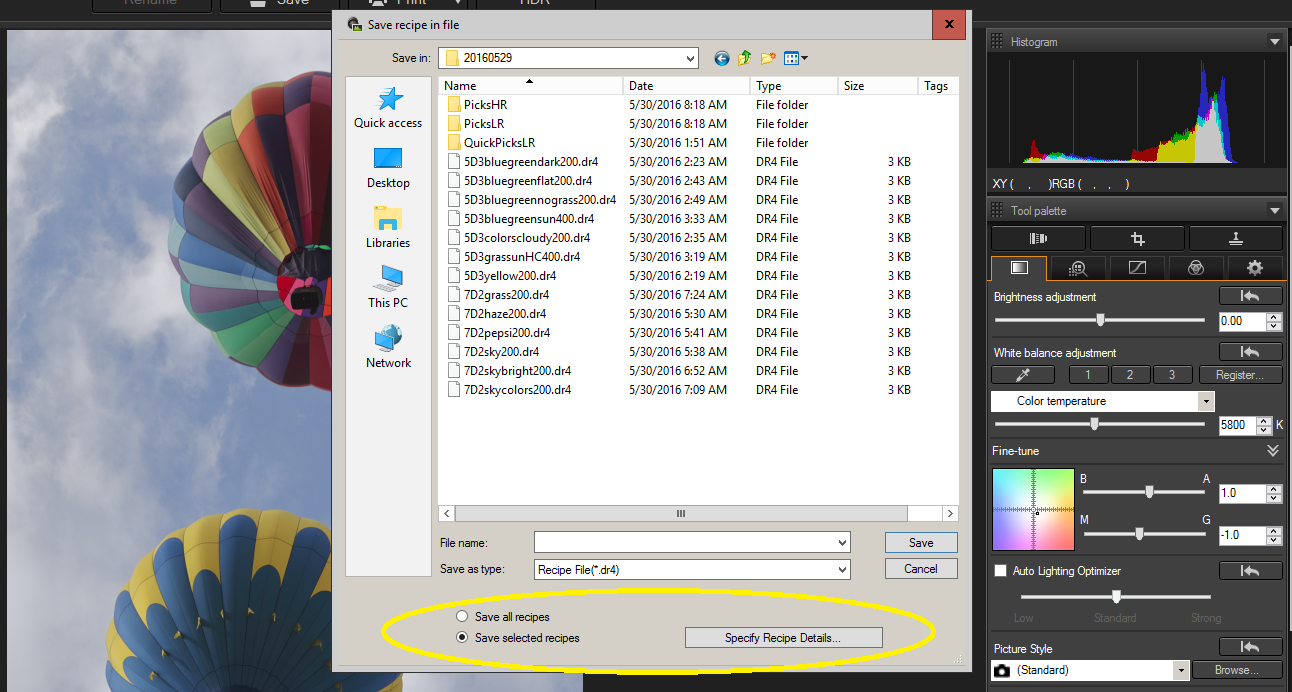 This dialogue box allows you to select which of the current settings for the current image are included in the recipe you are copying or saving. 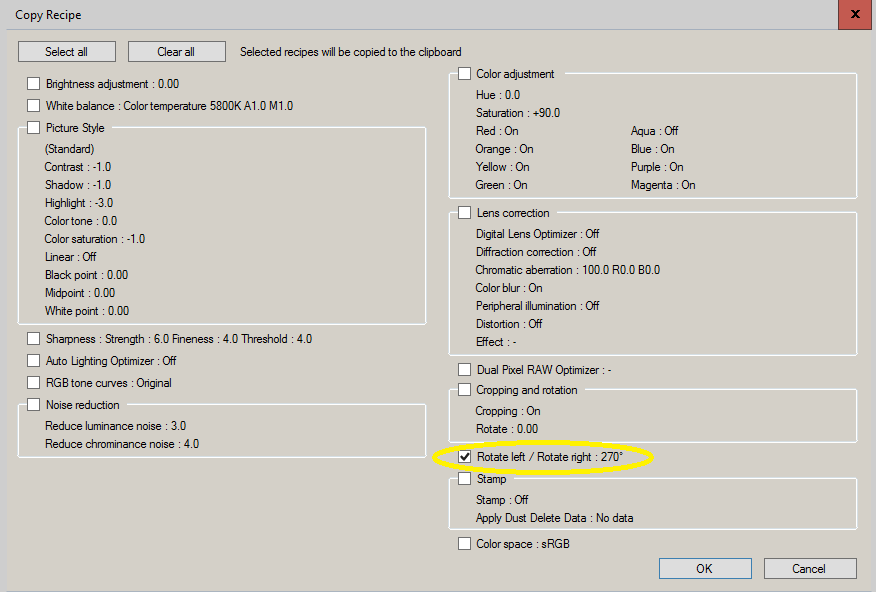 For the rotation information written to the file by the camera (assuming the camera's menu has the rotate on computer or rotate on camera + computer selected) to be applied when the image is opened in DPP 4 after a recipe has been batch applied to a folder of imported images, the Rotate left/ Rotate right option (currently showing 270º because the image displayed has been rotated 270º from standard landscape orientation to match the orientation of the camera at the time the shot was taken) should NOT be checked when the recipe that is applied to the folder was created. If the box IS checked when the recipe file is created (or if the all details option is selected), the rotation applied to the image used to create the recipe will be applied to all of the images to which that recipe is pasted.

Not the answer you're looking for? Browse other questions tagged canon image-processing canon-dpp or ask your own question.

8
Can Canon DPP create HDR images from 3 RAW images?
2
Need help updating firmware on EOS 7D (Windows 8 Mac 10.7)
2
How to save the auto rotate photo in Canon DPP
1
Can Canon DPP 4 put a watermark on a photo?
0
Canon 60D not recognized by my laptop Windows 10 64bit
1
Are changes saved automatically in Canon's DPP 4?
3
Canon DPP 4 - copy/apply white balance settings
2
Canon DPP - how to adjust brightness to specified maximum level on some spot automatically