Why do the people in this old photo look so... photoshopped?

I came across this picture today and think it's pretty cool: we don't have logjams like that any more.

But the people in the photo look... odd. If it were a newer photo, I'd say they're photoshopped. Is this look somehow part of the technique/exposure, or were the people somehow added later by the photographer? 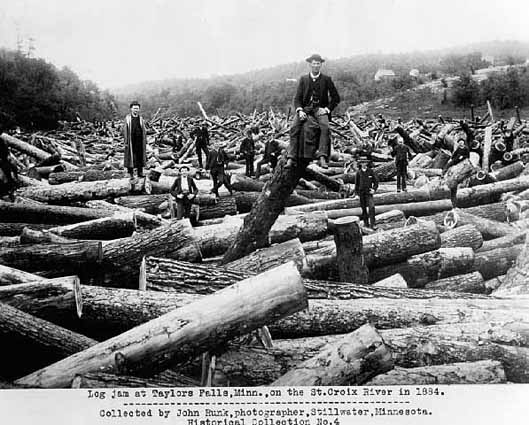 I think, at least to me, that in addition to the contrast issues 'relativitaet' mentioned, the fact that the person in the foreground looks so much larger than the men in the background feels a bit unnatural. This is due, I suspect, to the photographer having used a relatively short focal length lens and having set up close to the foreground person. This leads to a perspective that's not what would be seen with the naked eye. You can see how rapidly the logs' diameters shrink with depth, for example.

personally I still do a lot of analog photography with B&W films, since I have my own Darkroom where to develop them.

To your question: there could be many reasons for that.

The first thing I've thought about is that usually B&W films have problems with the wavelengths around green. They are getting better nowadays, but looking at the date of your photo I don't think those problems where really fixed then. The photographer could have used some colored filter to avoid this, but I don't think he did, since the forest in the background is pretty dark (as you expect it with this "green wavelength" issue). So my first explanation would be that the wood, which was probably covered with some moss, has some parts that are shown darker than they actually are and this makes the people on the photo look "odd".

The other explanation I have for the "oddity" of the people regards the developing time of the film. It seems to me that the film was developed a bit longer than usually needed to increase the contrast (in the foreground it's pretty high). This is not immediately noticeable, but might be strong enough to make the people (with mixed bright and dark clothings) look more defined than the rest. In fact the most "odd" looking ones are the woman standing on one trunk and the man with the head in the very foreground sitting on another one. Notice that they both have dark cloths with here and there some white/bright things.

You might argue that the far background has very few contrast at all and with that you are totally true. But when developing a B&W film if one knows that it was a foggy day or at least the sun wasn't that strong, like it seems to be the case here, one could decide to develop the film longer to enhance the contrast. I've done this several times to get rid of annoying mist, which I didn't want to have in my photos. Despite this, it's now always perfect, especially if there is stronger fog. Anyway you could define this as the "Photoshopping" of the analog photography.

It could be also a combination of the two things I have listed.

I hope I could help you with my answer! Just keep in mind that I made some suggestions based on my personal experience and just looking at the photo you posted. To know the "entire" truth one should look at the negative, since it usually carries much more informations than the printed photo.

Not the answer you're looking for? Browse other questions tagged history or ask your own question.

4
What is the Adam-Salomon style of lighting?
23
What makes this Eggleston picture great?
8
Why do people say they like "art" and "photography", instead of just "art"?
4
Who is the (contemporary) photographer using an old bellows camera?
5
How did people showcase their photographs before the Internet?
3
Was there ever a photo that made people cry?
5
Who is the photographer of this black and white photo of two female nudes standing over a pile of clothes?
1
Why do so many old cameras have camera lenses made in Japan?
6
What was Bob Parent's "Signature Technique," and how is it visible in this (linked) photo?