I was shooting today using two off-camera speedlites fired using radio-triggers. Images were captured in RAW. Mode was AV. I have the camera set to display the captured image for a few seconds immediately after it's taken. Weirdly this image would always appear severely under-exposed. However, if I then displayed the image again it would appear correctly exposed. I've now download all the images to the computer and all are correctly exposed. It's as if the camera is initially showing a partially processed image from the RAW capture. Has anyone else experienced this? Is it "normal"? Whatever the case, it's unnerving as I kept thinking the speedlites must not have fired. I don't use flash very often so need a bit of reassurance that something odd isn't occurring.

The best way to assess the exposure of an image using the LCD screen on the rear of the camera is to use the histogram. This eliminates variations based on the screen brightness setting of the LCD. I prefer to use the RGB option rather than the overall brightness on a single chart. The RGB graph allows you to see when a single channel may be overexposed, even if the average brightness of all three color channels combined is not. 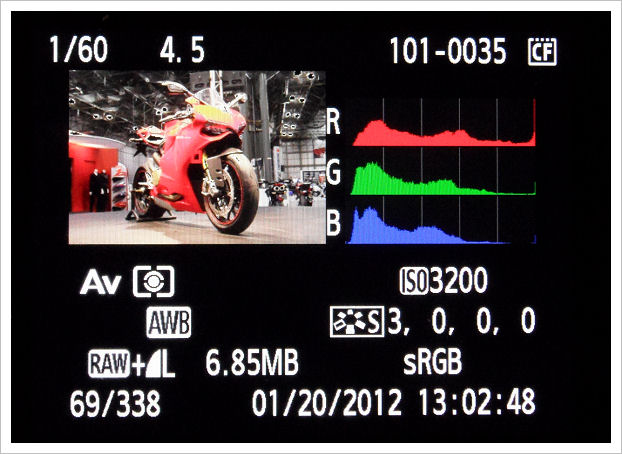 I'm assessing the exposure, not from the histogram, but purely from viewing the rear screen. (It never occurred to me to use the histogram to verify the exposure!) Also it never occurred to me to check the LCD brightness setting, which is set to "Auto"; however, the lighting remained constant between reviews so I don't think that is a factor. I've also noticed this happen when not using Speedlites, but it's inconsistent: sometimes it occurs, other times not.

When the brightness of the rear LCD screen is set to Auto it can vary from moment to moment even in the same overall lighting conditions.

Remember that the angle of a specific intensity of light falling on a plane affects the field density of that light upon the plane. That's why temperatures are cooler in the winter than summer. For the Northern Hemisphere the Earth is actually slightly closer to the sun in winter than summer. But the tilt of the Earth's axis away from the sun during the day for the Northern Hemisphere spreads the energy from the sun over a wider area than when the axis is tilted towards the sun in the summer.

So even in the same light, the small sensor below the LCD screen can receive different amounts of light based on the angle the camera is held with respect to light sources. Covering the sensor with a finger will also have an effect, as is mentioned on page 279 of the EOS 5D Mark III Instruction Manual. (Note: For various firmware revisions the page number may change slightly. The screenshot below is from the firmware v.1.2.0 version of the user manual. Updated manuals may be downloaded from the appropriate Canon support site for your country.) 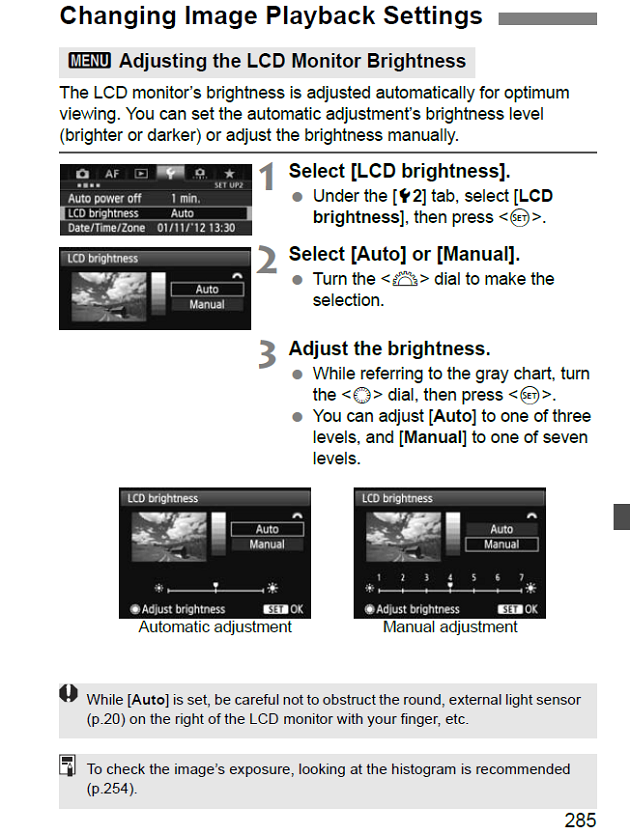 I prefer to manually set the brightness of the LCD screens on the back of my cameras for this reason.

3
How to deal with shots at night with different kinds of light from different sources?
3
How could I have post-processed this picture to create better lighting?