Different things have different brightness levels. And with a normal camera, when we set more exposure to show details in the shadows, the already existing-details blow out. And vice versa — when we expose for the highlights, we lose shadow detail. But the human eye doesn't have this mess; it has the ability to catch almost all the details — the human eye has a broad dynamic range.

The human eye can also adjust to any color temperature. So, it has a broad ______. What is the blank?

Like in the case of brightness, does a term exist for color temperature?

I mean, human eyes have an invaluable ability to see the details with widely varying brightness levels, and when a camera approaches that ability, we say that camera has a wide dynamic range. So, like that, is there a term for cameras' ability to adapt to widely varying color temperature levels as the human eye does?

The phenomenon you describe is called color constancy, and it is enabled partially by the human vision system's chromatic adaptation and partially by something I will describe using the scientific term complicated stuff in our brains. That may sound a bit glib, but this is actually a complicated topic with whole books just scratching the surface and significant ongoing research.

Dynamic range — that is, dealing with extremes in brightness — is addressed by several different things in the human vision system. Your eyes themselves adapt to different levels of light in various ways, from opening and closing your pupils to actually changing levels of sensitivity. And, unlike the way a camera sensor works, this isn't a global change, which is why you get an after-image when you stare at a bright light and then look away. But, there's a second component — again, complicated brain stuff. Rather than a camera-like view, your brain actually builds up a mental model of the world over time, and this includes memory/perception of different brightnesses. The dynamic range in our model is many times that of what the eye itself can process.

This process works so well that people don't realize the differences in brightness we experience every day — leading to questions like Why is my camera metering indoor scenes as darker than I expect, forcing me to use a high ISO? — it goes against all instinct to accept that sunlight is 500× brighter than a typical "bright" interior.

When it comes to color constancy, chromatic adaption explains part of the situation. But it's also important to realize that your brain is hard at work trying to make everything fit into a constant model of the world, and that includes dealing with different illuminants — light sources with different properties like color temperature. Your brain uses multiple cues to do this, and — despite all the research I noted — we aren't really sure exactly how it works. It involves our perception of the light source, our perception of the background and surroundings, memory colors, and perhaps other factors. However it happens, it means that when you're in an interior room with incandescent lamps and sunlight through a window, your brain covers for the difference in color temperature in a way that a fixed recording of the scene doesn't.

Cameras today simply do a global white-balance correction based on automatic or manual estimation of the illuminant. This can work very well when there's just one light source, but is often a mess otherwise. As far as I know, no cameras really attempt to do anything else, so when possible, photographers simply work to make the light sources match — see for example How do I use gels to make my flash match the color of the ambient light?.

It's possible that advances in computer vision will trickle back to photography — as I said, there's a lot of active research. In the meantime, you can't buy a camera that's different from any other, as far as multiple light sources are concerned. If you are in that situation, if you can't change the light, your best bet is to shoot in RAW, make multiple versions each adjusted to neutral for the various sources, and then blend those together manually (for example, using multiple layers and partially erasing to get an overall consistent look). This can be a lot of work — which brings us back to considering if we can gel or filter the light after all.

The human vision system is amazing, but it does have limits. The Kruithof curve describes the range within which most people report "pleasing" color constancy. Note that this is linked to brightness, with more tolerance for warm (low-K) dim light sources and more tolerance for cool (high-K) bright sources. 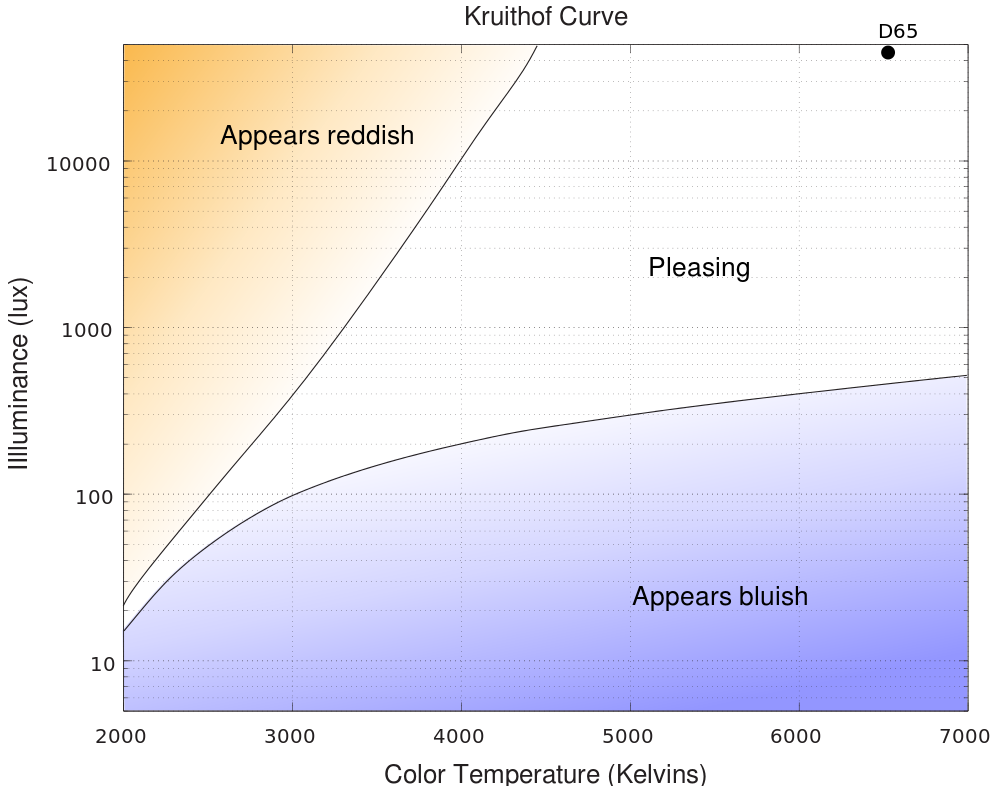 This is useful to keep in mind when composing photographs, as preserving (or creating) a blue or orange/red tint rather than white-balancing to neutral sends a message that the environment being photographed is outside the normal range for the apparent brightness (perhaps lit by candles or a campfire).

Our eyes have a wide range of color (chromatic) adaptation.

We see using a combination of our eyes and our brain. As to color adaptation, this phenomenon operates on both eyes independently. Because of this, there is a splendid way that you can demonstrate your amazing ability to accommodate.

Place a strong colored filter over just one eye. This can be a deep red or deep yellow etc. What, no filters? Use colored cellophane candy wrappers. You place the filter over just one eye and look about with both eyes open. After a few minutes, remove the filter and stare around, covering one eye with your hand. Now switch covered eyes. Do this switch several times. You will witness firsthand the ability of the eye/brain to adapt to conditions. While peering through the red filter, the eye/brain interpreted this as an abnormal situation. The eye/brain turned down the red sensitivity of the filtered eye. The other unfiltered eye was not altered. As you glance around, you will surely notice that the once filtered eye sees the world with a cyan (blue + green) cast. Cyan is the complement of red (opposite). Try this with many different color filters. You will be amazed at how our eye/brain attempts to normalize our color vision. This is the white balance we wish for in our cameras.

Additionally: The dynamic range of the human eye is vast. One trick the eye/brain uses is to adjust the ISO of the eye for better night vision. Sailors would put a patch over one eye for an hour before going on deck at night. This is why pirates are often depicted with an eye-patch. Under dark conditions, the eye/brain bathes the retina with a purple protein called visible purple (rhodopsin). This stimulates the rod and cone cells amplifying our ability to see under dim conditions. The dye bleaches in seconds under bright light conditions.

Not the answer you're looking for? Browse other questions tagged terminology white-balance hdr dynamic-range human-vision-system or ask your own question.

33
How does Kelvin for color temperature relate to Kelvin for actual temperature?
24
Will I lose image quality by adjusting white balance in post processing?
10
Blown out blue/red light making photos look out of focus
23
How do I use gels to make my flash match the color of the ambient light?
3
Why is my camera metering indoor scenes as darker than I expect, forcing me to use a high ISO?