Who took this picture of a Concorde during the 1973 eclipse, and how? 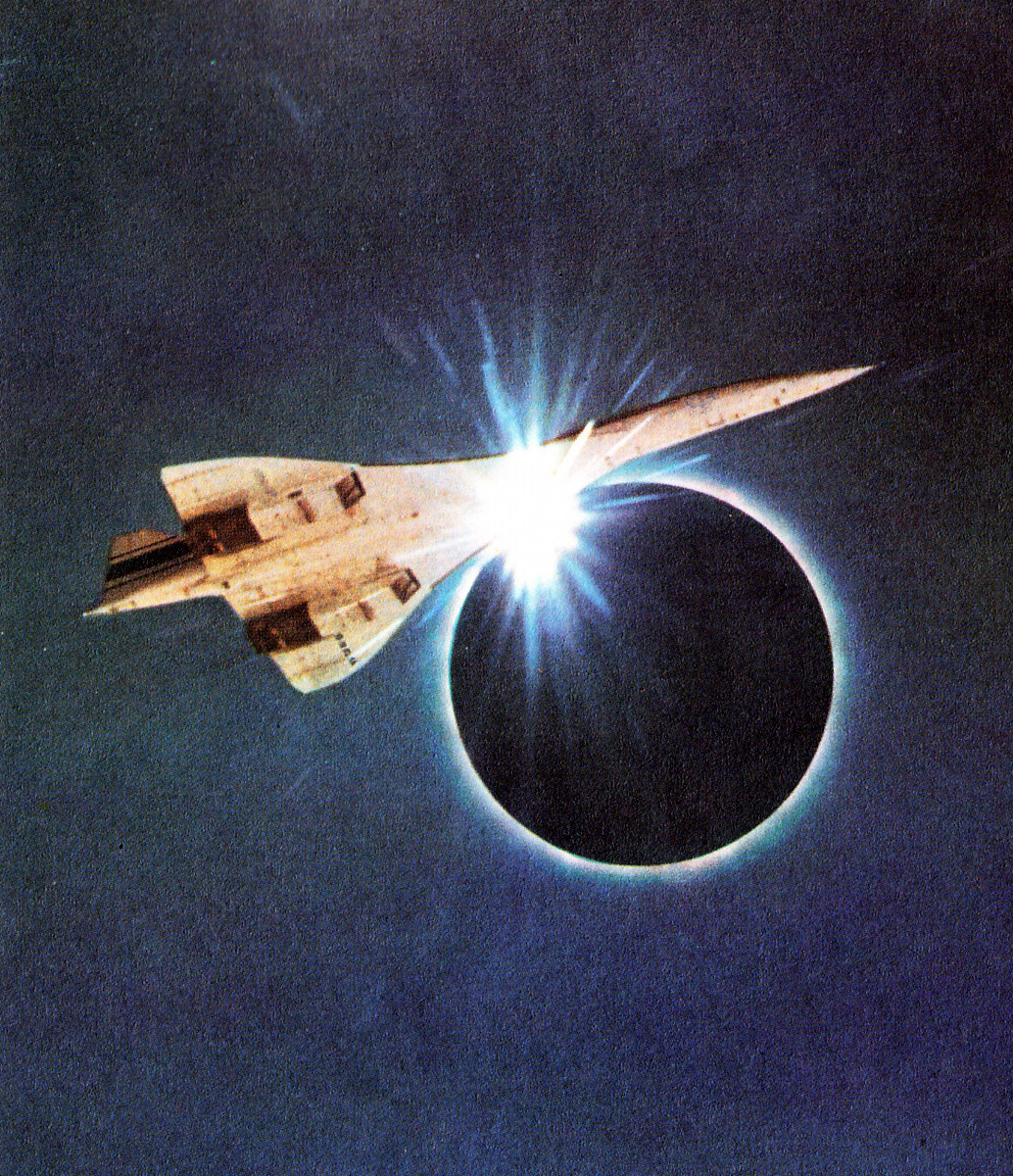 But I haven't been able to find information regarding attribution and techniques of the photograph itself. How it was taken? was it taken from another aircraft?

I have found a bigger version of the picture that shows reflections that seem to suggest the picture was taken inside a cockpit: 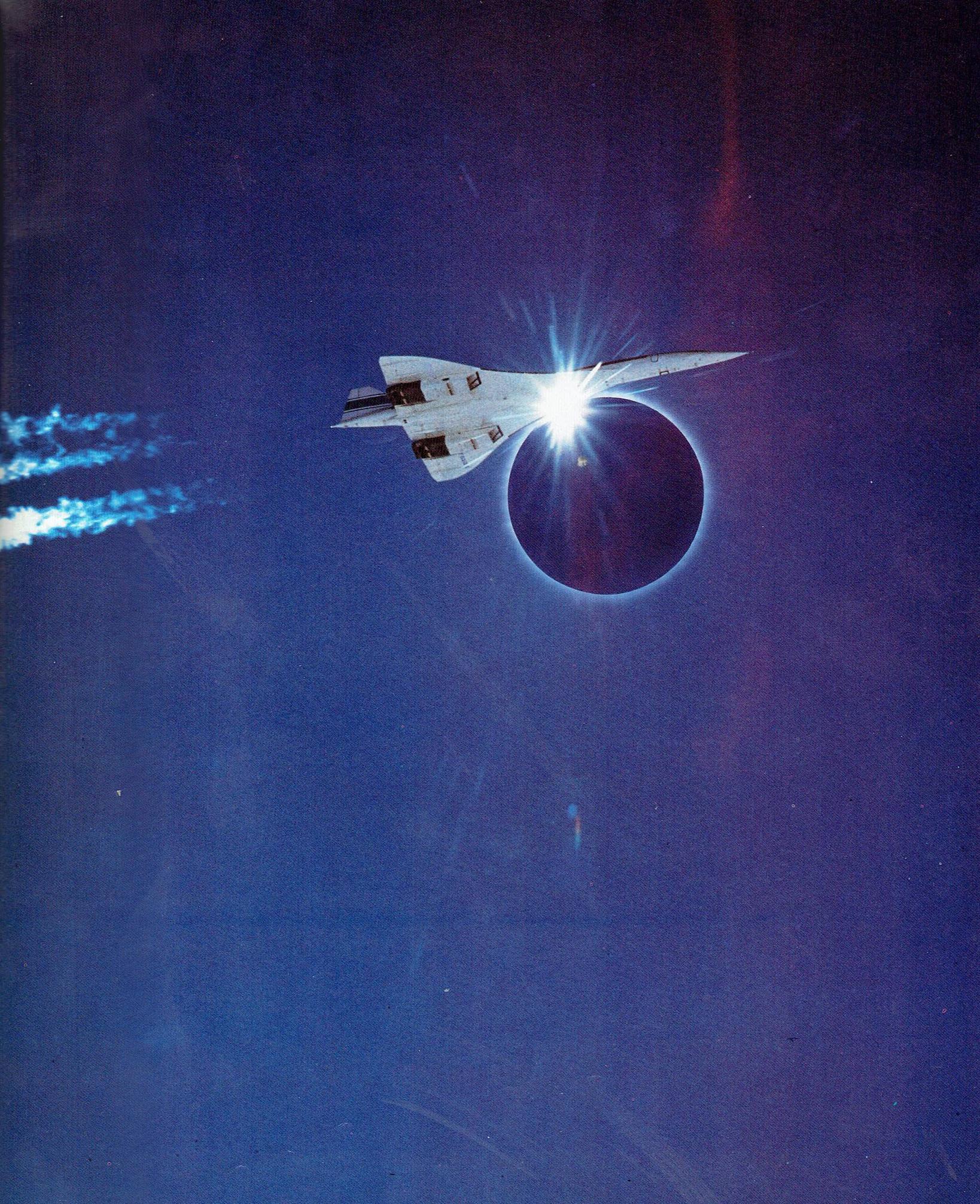 The picture was found on this link

The poster does not know much details either, but he attributes the picture to "Arthur Gibson". I googled Arthur Gibson and concorde and found a link to an archive website about the concorde. Some of the pictures in this website are also credited to Arthur Gibson, and in the time slot of 1973, there is a section where the Concorde is shown flying in formation with other jet aircrafts. So presumably the possibility of this picture having being taken close enough from another aircraft is very plausible

This isn't a complete answer, but I think I can add to the plausibility of it being a real photo by explaining the lighting.

During an eclipse, the Moon casts a shadow on the ground. Concorde 001 is depicted at the "diamond ring" point of an eclipse, where the Sun is just barely touching the edge of the Moon's disk. Therefore the aircraft, while still in shadow, is only on the very edge of the dark area. Looking out from the windows of an aircraft at altitude, the view of the ground would appear like this: 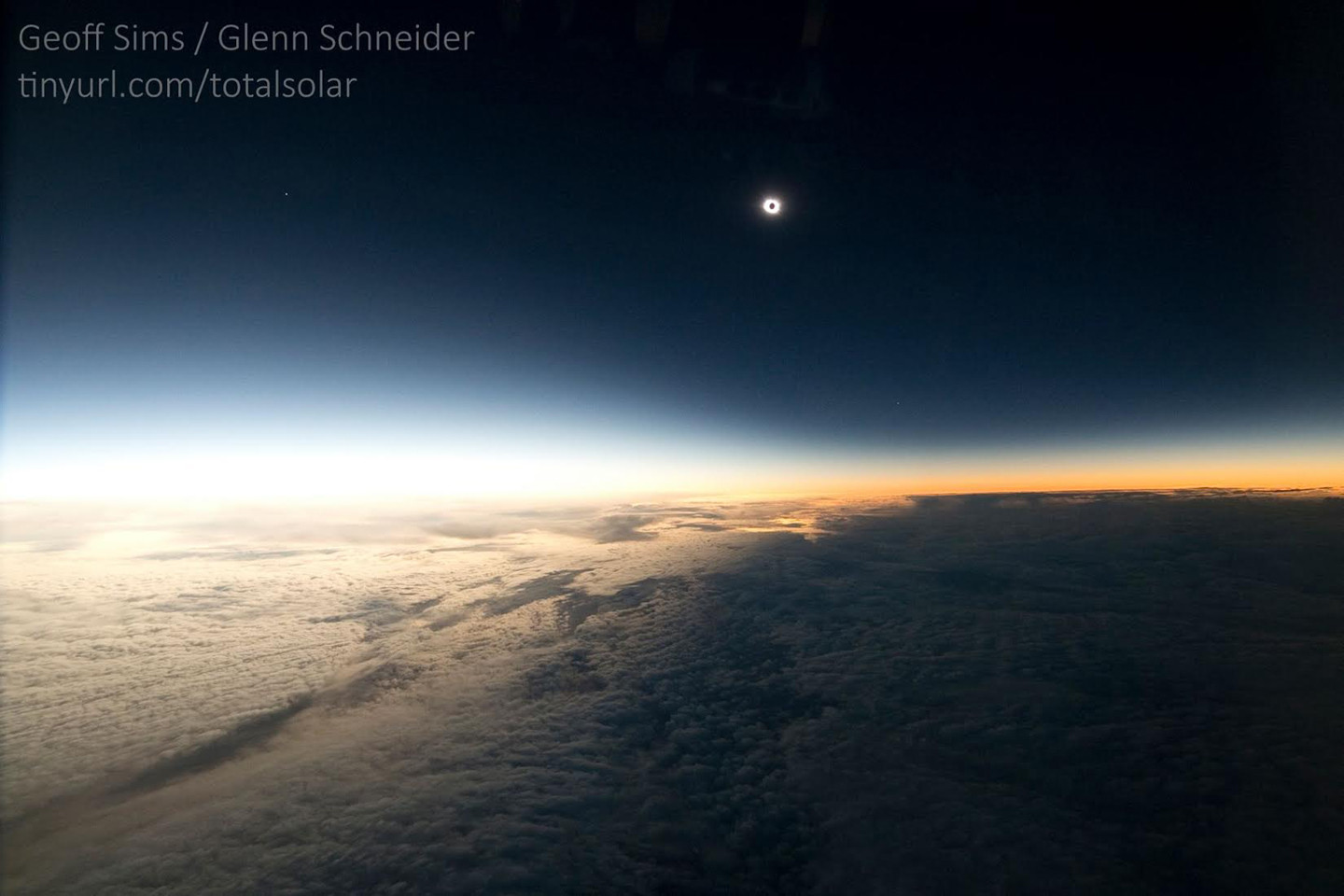 As you can see, although there is very little light from the Sun, there is quite a bit of light reflected back from the illuminated part of the ground. I believe this reflected light is what's illuminating the aircraft. (Note that in the original version of the Concorde image, the light has quite a strong blue cast, which is consistent with this as well.)

Additionally, one of the answers mentions "light rays appearing to pass between the plane and the viewer". I believe that these "light rays" are simply a lens flare or diffraction effect, caused by shooting directly into the small area of the Sun that's visible on the edge of the Moon's disk.

Note that the lighting provides further evidence that the photo was taken from another aircraft. They would have to have been flying at quite a high altitude for the lighting to look like this.

Here's an interesting article: In flight: the story of Los Alamos eclipse missions. A key quote: "As the mission proceeded, those on the 135 [a Boeing NC-135 that had already been used for eclipse astronomy in 1965] watched in disbelief as the SST [protoype Concorde] streaked by and above at 55,000 feet". There are also mentions of the photography taking place on the NC-135. What's lacking is any mention of photographs of the Concorde taken from the other aircraft. There some more information in a dreadfully-OCRed scan of what appears to be a Los Alamos internal newsletter (scroll to p14). Ther was apparently also a Caravelle support plane, it's not clear whether that saw the eclipse.

BUT: I'm not sure that's F-WTSS on the underside of the wing. That's the French prototype that carried out the 1973 experiment. The first (innermost) letter on the first image looks much more like a "G" as on the British Concordes. That would make the 1973 date wrong as the British protoype wasn't involved in the '73 eclipse mission. On the other hand that tail design was used on Concorde 001 -- the right plane for '73, and the larger image looks more like the serial starts "F-"

I'm pretty sure that it is an artist's concept. In fact, copies of the image flew aboard that very flight. Scroll down to item # 599 in this auctioneer's list of postcards that flew aboard the Concorde:

EDIT: I was mistaken; the postcards flew aboard a different eclipse-viewing flight in 1999. So it's not proof that it's an artist's concept although I believe it to be such, because of the light rays appearing to pass between the plane and the viewer.

I commissioned and co-designed the painting by Don Connolly of Concorde 001 at the 1973 eclipse.

The photo shown is real -- and it is also a fake!

The original picture is indeed by Arthur Gibson and appears on the front cover of "Concorde: New Shape in the Sky" by Kenneth Owen, Jane's, 1982. The original has the small "sun glint", and it is the real Sun.

It must have been tricky to take a picture at that moment, but Gibson took hundreds of Concorde photos, so he got lucky!

The picture does not have the large "eclipsed Sun/Moon". That was added!

Also, as pointed out above, the plane is almost certainly not Concorde 001 but is the British prototype.

The plane image also appears to have been doctored to erase some distinct markings the British prototype has on its fuselage.

Another clue: the eclipsed Sun was overhead, so to get a picture of Concorde, with the Sun also in the picture you must have a "bottom view" of Concorde!

We allowed in our painting a very small tilt, to make Concorde look better. So our painting is not 100% accurate! :-)

In the Gibson fake photo, the huge tilt of Concorde means that the overhead eclipsed Sun cannot be behind Concorde.

Again, Concorde was flying level during the eclipse, with the Sun overhead, but the camera that took the picture is obviously not looking overhead, unless the picture was taken of a Concorde banking.

The doctored Gibson picture is fake!

I also believe this is an artist's concept. I haven't been able to find the artist, but I found a similar painting by Don Connolly: 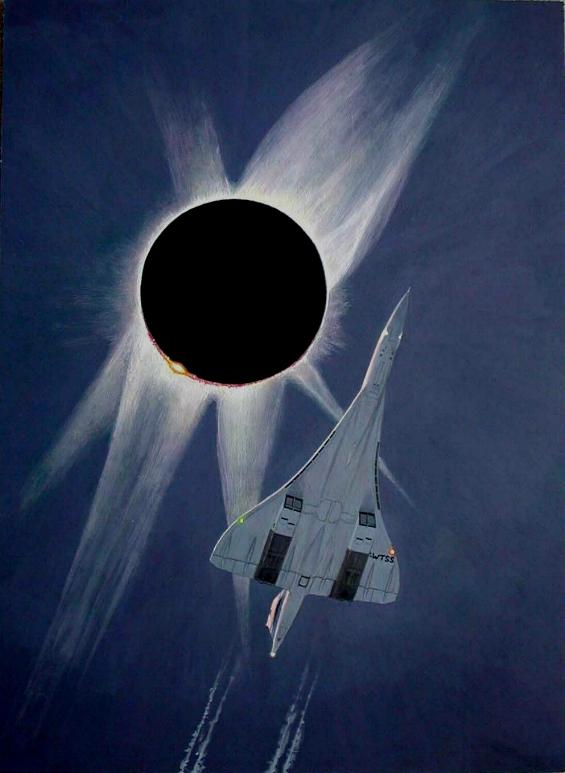 The artist and the researcher mentioned above have also written an article (pdf) about the 'making of' of the painting. They describe how they took a photo of a scale model of the Concorde at a specific angle, to use as a starting point for the painting.

We chose to create a view of the eclipse as if photographed by a 35 mm camera with a 1000 mm lens. As per Fred Espenak’s NASA eclipse bulletin diagrams, this gives a corona nearly filling the film frame, and thus our picture frame. The one photo known to exist of the 1973 corona is that by Wendy Carlos (shown at left). 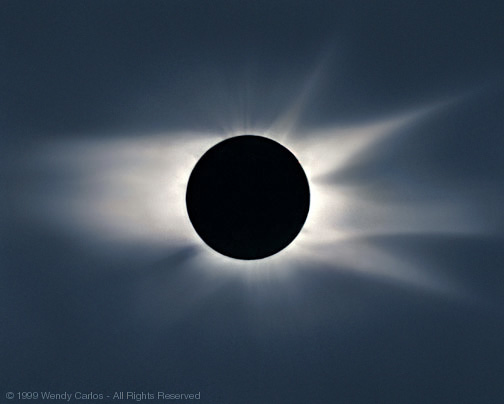 The angle of the corona and the placement of the bead of sun at Concorde’s “exit point” from the umbra were calculated by Fred Espenak, of NASA.

Obviously, the view of Concorde against the sun must be from below. To portray Concorde as roughly the same width as the sun, which we had anticipated would be aesthetically pleasing, the SST’s wingspan must subtend about 0.5 degrees. The distance to the “camera” below Concorde must therefore be its half-wingspan (12.75 m) divided by tan(0.25 degrees), half the angle subtended by the sun. That is, (12.75 m)/(0.00436) = 2924 m – about 3000 m.

That gives two choices: Concorde has just entered the umbra, or Concorde is about to exit the umbra. At these two positions, you will also have the formation of a diamond ring. To see Concorde enter the umbra, a west African observer would be facing the eclipsed sun – some 63 degrees above the horizon, just north of east – his back to the SST’s flight path. Thus, Concorde would appear to dive down from above and behind the observer, and disappear into the umbra. To see Concorde leave the umbra, an observer in east Africa would be facing the eclipsed sun – about 74 degrees above the horizon, just north of west – his front facing the SST’s flight path. An invisible Concorde would rise up over the horizon and exit the umbra. Now a plane “diving down” looks like it is about to crash, while one rising up is "triumphant". So it had to be Concorde exiting the umbra.

The only location which was within totality, but also had light on the underside of the SST, the beginning of a diamond ring, and an aesthetically pleasing composition. Concorde, with its multiple curves, is an incredibly difficult aircraft to visualize from any specific angle. We attached a Concorde plastic model to a ceiling, dropped a thread down to the floor at 74 degrees, and then photographed the model along the thread with long lens. That photo was the starting point for the artist’s accurate portrayal of the aircraft.

This painting is also used on the cover of the book Racing the Moon’s Shadow with Concorde 001 by Pierre Léna. 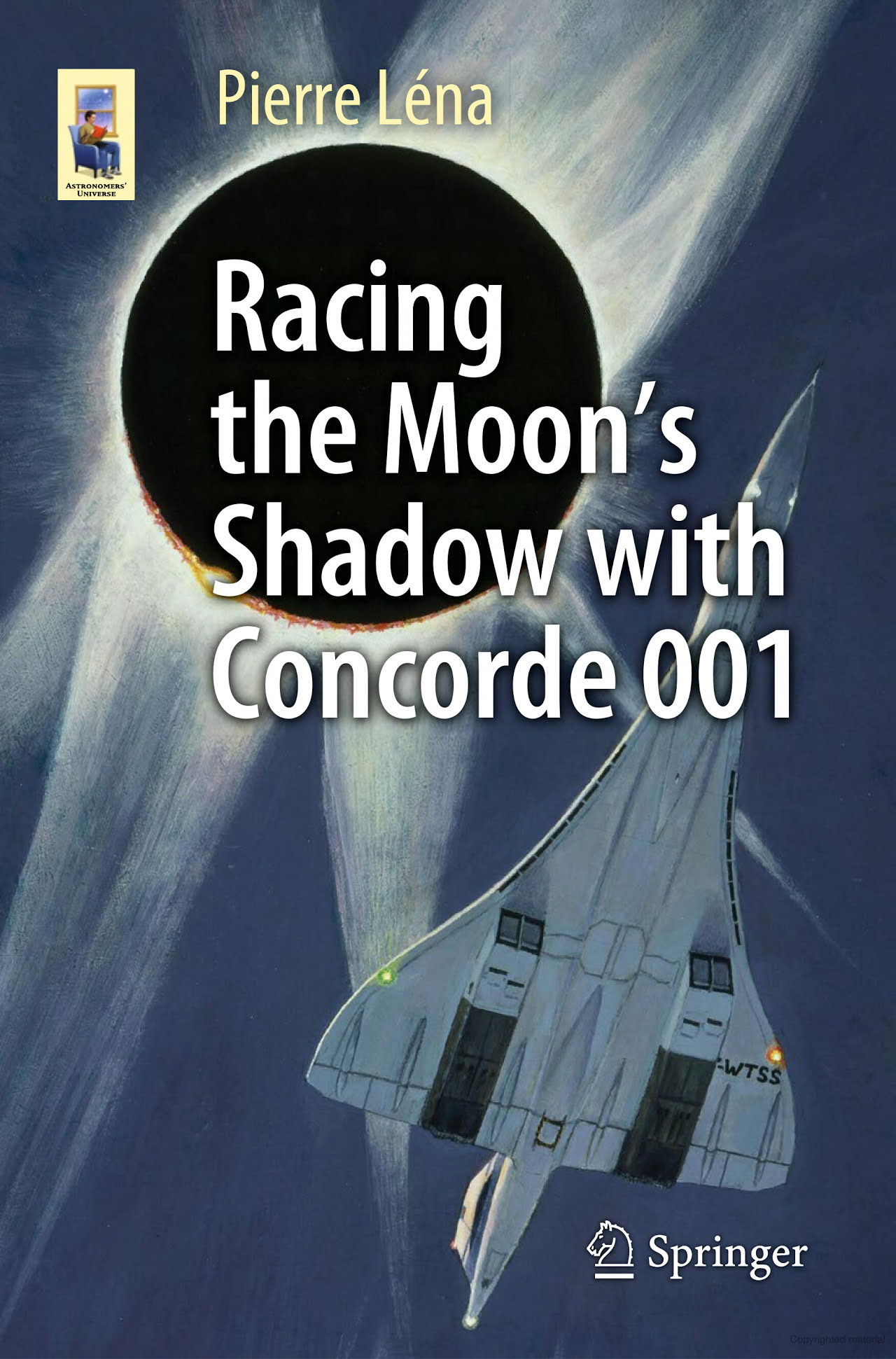 On the acknowledgments page of that book, we find a bit more info:

So, if the photo in the original question is indeed a real picture, then this gives us already a very specific timeframe and location from where this photo would have been taken, with at least a 1000mm lens.

Sorry folks, it's fake. Found the original photo. It was taken by Arthur Gybson and was used for the front cover of "Concorde: New Shape in the Sky" by Kenneth Owen. However The photo itself stays breathtaking, doesn't matter if it's real or not. 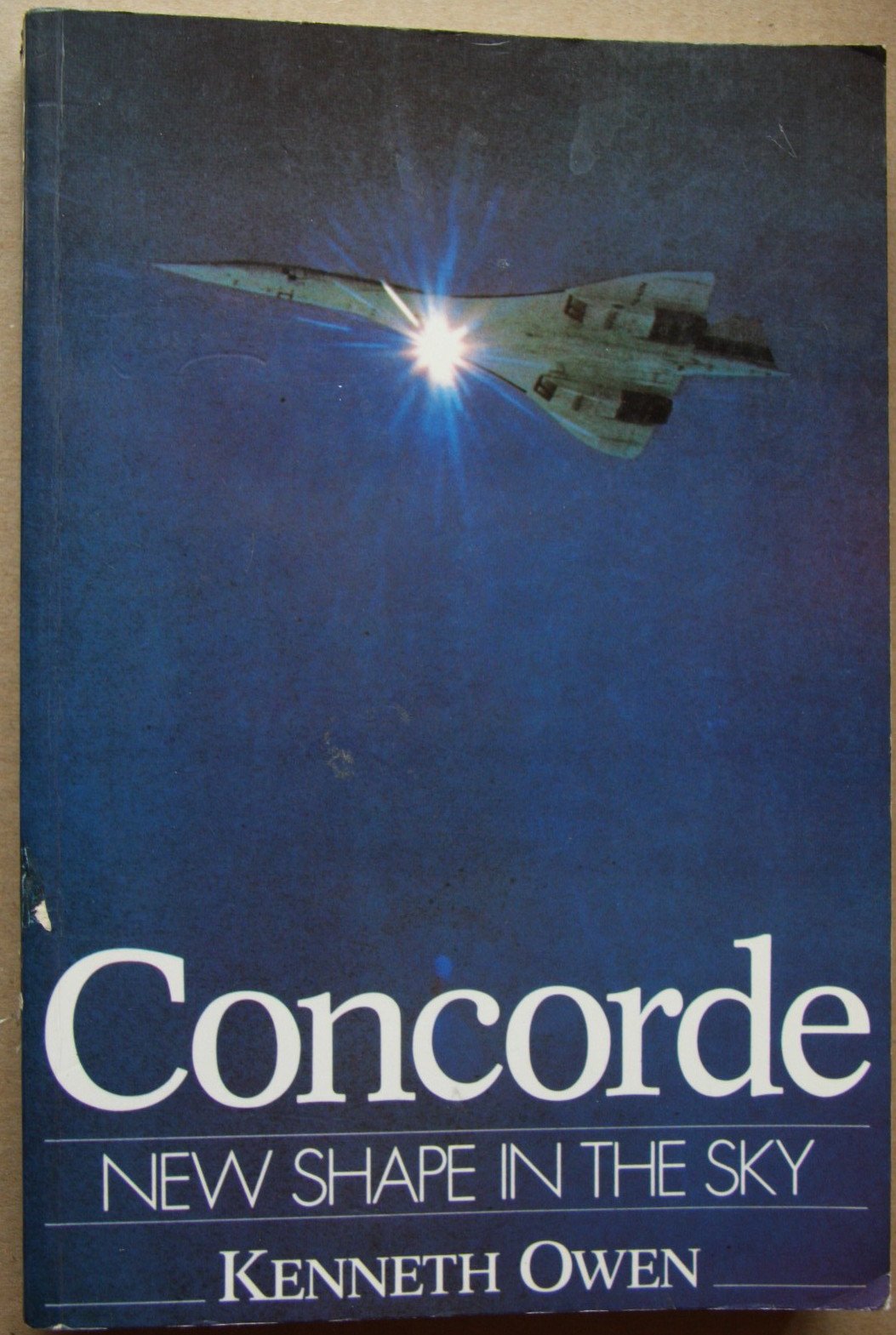 I used to work for Arthur Gibson in his advertising agency in the 70s (Davis Gibson Advertising) we did advertising for British Aerospace and Arthur Gibson is considered the best aviation photographer of the 20th century. He took loads of red arrow photos and other aircraft from other planes and took the famous red arrows and Concorde together in formation and with the QE2 below! Hope this is of interest...

I know this isn't the formal way to answer but i plan to add more detail with photos and other evidence. I will say this before my mother can find all the info and original in our archive.

This was a Photo taken by my grandfather Arthur Gibson, sadly i never met him. He actually won an award for this photo. It also was taken during a real eclipse with Concorde as you see it.

like i said, i will post again when mum (Arthur's daughter) has found the relevant archive, hopefully tomorrow.

Thank you for taking interest in granddads work.

says: "During the June 30, 1973 solar eclipse, a specially modified Concorde flew under the moon's shadow for a record 70 plus minutes. This photo was shot from below by a Boeing NC-135 chase plane."

Not the answer you're looking for? Browse other questions tagged eclipse airplanes or ask your own question.

3
How do I photograph a landscape with a solar eclipse where the sun is not the main subject?
0
How do I recreate the colours and what seems to be a filter on the image
2
How big is the sun in an image made with Canon APS-C and 300mm focal length?
2
What are some causes for an oblate image of the Moon during total solar eclipse?