I am using my S95 to take photographs of LCD computer screens which are used to display Microfilm images related to my research. Unfortunately they aren't running a normal OS, so it's not an option to take screen-shots. So far, it's working decently well, though I am running into an issue where the computer screen is reflecting a good amount of glare from the library's lighting wherever there is a black space on the screen. I've tried to reduce glare in two ways:

However, I'd like to be able to further reduce glare issues. Outside of changing the library's lighting (which I can't do), is there anything that you would suggest that I do with the camera settings?

Below is an example of one of my early shots when I was trying it out that demonstrates the glare. Thanks in advance. 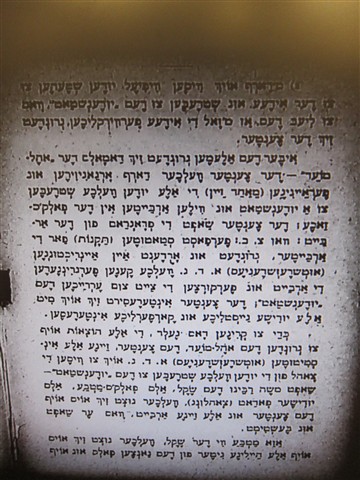 Polarizers and LCDs may not be the best idea; LCD displays work by polarizing light†, so knocking back the glare may not even be possible without blocking the image altogether, depending on the screen's direction of polarization and the direction of the glare source.

A hood (suggested in Greg's answer) will be your best bet -- but you can use a box rather than fabric or spend ten bucks putting together a frame out of PVC pipe or a bit of wood molding. It should only take a few seconds to set up (and should be relatively easy to explain to librarians as well). That eliminates the extra person.

As for keystoning, taking the time to set the camera up parallel to the screen is your best option. That will also solve your depth-of-field problem.

† The backlight is initially polarized in one direction by a full-screen polarizing filter. Black pixels are black because the liquid crystal is aligned to allow polarized light through at 90 degrees to the backlight polarizer. The liquid crystal in non-black pixels (or, rather, non-black pixel segments) are electrically aligned at some angle other than 90 degrees. There are a number of strategies for aligning the polarization of the pixel segments relative to the full-screen polarizer; they are out of scope here.

It probably will take another person to help, or you might get creative with gaffer's tape.

Drape a black sheet of cloth over the top and sides of the monitor so no ambient light can directly hit the screen.

Fire away with a helper holding up the cloth so you can shoot under it. Creative use of gaffer's tape (it's like masking tape but leaves no residue) might allow you to do without the helper.

Another thing that will help reduce glare is to add a polarizing filter if you have one. The downside of that is polarizing filters cost you between one and two stops of light, so you might have to increase your ISO speed, use a tripod, or increase the monitor's brightness.

If the light is directly behind you, then wear a black shirt and stand between the light and the screen. If the light is overhead, you can prop something black over top of the screen. A piece of cardboard may do, or you may be able to use a collapsible circular reflector that has a black side. They even make the same thing for car windshields, so you may find it cheaper/faster from an auto store.

One thing to keep in mind, if that reflection is always on the same side of the monitor, no matter where you hold the camera, then it's possible it's the backlight of the LCD shining through. If that's the case, no amount of shielding will help, and you'll just have to under expose the image a little and then correct it in a photo editor as best you can.

Not the answer you're looking for? Browse other questions tagged canon technique macro point-and-shoot glare or ask your own question.

10
Best camera settings for photographing text?
4
How to best take a picture of a screen, like a computer monitor, with a phone camera?

9
What settings will be good for taking photos of falling leaves?
1
What's the fastest memory card that can be used with a Canon S95 (P&S) digital camera?
2
Does the anti-glare coating on the DELL U2711 interfere with its use for photo editing and review?
1
Having issue with importing photos from camera to computer
0
How to troubleshoot LCD problem in a Canon Powershot G12?
2
Canon EOS Rebel t3i has developed weird settings seemingly over night?
7
What is "veiling glare"? How does it affect my photos, and how can I avoid it?
1
How can I eliminate glare from stage lights when taking concert photos?
3
How to shoot nice shots in indoor nightclub?
3
Avoiding glare from wooden picture frames