New to this site and glad it is here! I just bought an Albinar 500mm F/8 lens with 2x lens. It came with the T-adapter and I put it on my Nikon D3100 camera. I tried to shoot in Manual mode and was able to focus and set shutter speed but the Aperture just stays blank: "f--". I press the correct button at the top of the camera to change the aperture but it won't do anything. Has anyone had this problem with the Albinar lens?

Has anyone had this problem with the Albinar lens?

There are two versions of the Albinar 500mm f8. One is a fixed aperture mirror lens and one is a variable aperture "Preset" lens.

Which version do you have? 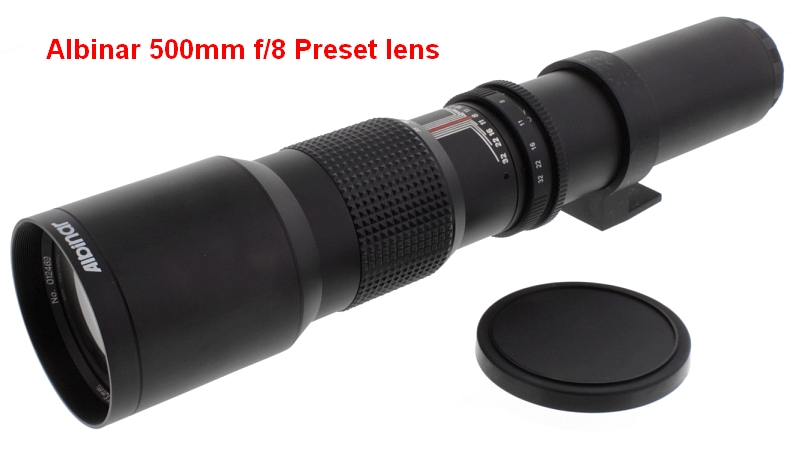 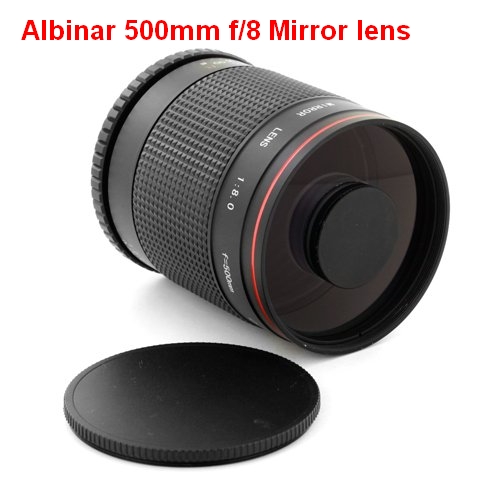 They are both actually made by Samyang and also sold under many other names. (Opteka, Bower, Kalimar, Phoenix, Rokinon, Quantaray, Vivitar, Bell & Howell, Falcon, Walimex, etc)

These lenses are both fully manual lensese that have no communication at all with the camera.

If you have the mirror lens version the aperture is fixed at f/8.

If you have the "Preset" version you can set the aperture is on the lens itself. 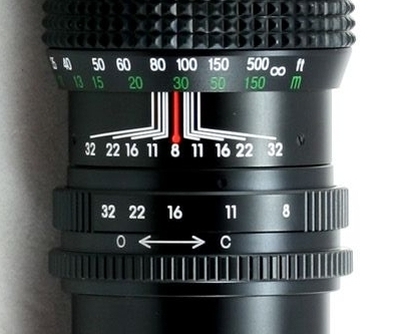 The viewfinder will be slightly darker to what you are used to due to the f/8 aperture and will only get darker as you stop it down.

As with most lenses, this lens will give better results if you stop it down 1 or 2 stops. (f11 or f/16) This means it is best used on a sturdy tripod and/or bright conditions or high ISO.

Because the 500mm F/8 mirror lens from Samyang/ Rokinon/ Bower/ Walimex/ Falcon/ Albinar/ Opteka/ Quantaray/ Bell & Howell/ whatever else they're calling it this week is a fixed aperture lens, as are most mirror lenses with a secondary mirror in the middle of the objective. In other words your lens has no adjustable aperture. Just as a prime lens can't zoom the way a zoom lens can, a fixed aperture lens doesn't have an adjustable aperture diaphragm.

Note: It has just come to our attention that there is also a 500mm f/8 "preset" lens from Samyang (and whatever other brand they are selling it as) that is not the mirror lens addressed in the answer above. For that lens the information below applies.

If you have the other, non-mirror version 500mm f/8 lens made by the same manufacturer then f/8 is the maximum aperture and other, narrower apertures may be selected by manually stopping down the lens using the aperture ring on the lens. Since the lens has no electrical or mechanical connections to the camera's control system the camera can not be used to control the aperture of the lens.

Not the answer you're looking for? Browse other questions tagged lens nikon nikon-d3100 or ask your own question.

1
Olympus T2 Adapter ring stuck on my Sony Alpha — how can I get it unstuck?
4
Why does my Nikon D3100 not fire the shutter in autofocus mode?
2
My Nikon D3100 says no lens attached when I use a T-Mount with it
0
Nikon D3100 Squeaky Lens Problems?
0
How do I fix the problem on my Nikon D3400 saying "lens not attached" for a Vivitar series 1 500 mm manual Telephoto lens?
2
What should I do when my D3400 aperture is stuck no matter what lens I use?
3
What's that little thing on a Nikon lens mount?
2
EOS-M4/3 Adapter stuck on Sigma Lens?