Does aperture affect field of view?

Answer with an image : the guy on the left represents your (vertical) field of view and its image on the sensor is inverted on the right (in other terms, the guy fills your entire image). 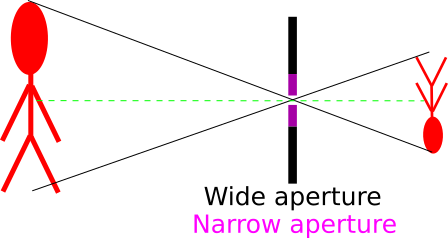 As you can see in this illustration, the rays of light going through the center of your lens aren't concerned by your aperture settings, they are still getting in, no matter how small it is.

Of course, when your aperture is too small, diffraction comes but it is another story (What is a "diffraction limit"?).

Have a look at What is "angle of view" in photography?

This is a good question but most have difficultly visualizing the answer.

First the definition: The angle of view sustained by a lens is the angle between the light rays that go to opposite corners of the frame and image with sufficiently good definition over entire frame.

Because all image forming rays pass through the rear nodal, the angle of view does not change as we open up or close down the iris diaphragm.

A caveat: Every lens projects a circular image area. Only the central portion possesses sufficient definition to be photographically useful. As we stop down, the twin demons, diffraction and interference begin to degrade the image. As these faults intensify, the size of the circle of good definition will contract. At some point, you might judge that the angle of view has been abridged.

Not the answer you're looking for? Browse other questions tagged aperture photography-basics field-of-view or ask your own question.

25
Do smaller apertures provide more depth of field past the diffraction limit, even if peak sharpness suffers?
29
Why do wide angle prime lenses have relatively small apertures?
3
How to compare the speed of lenses taking transmission into account?
4
Are the terms 'push' and 'pull' relevant/applicable to digital photography?
9
What is the benefit of a wide-aperture lens if you stop it down?
1
Why does changing aperture change field of view in my reverse-lens macro setup?
1
How to mathematically crop photo from one camera to match view of another?
2
focal length to aperture relation while zooming - is my russian lens lying to me?
2
Why smaller AoV APS-C has same aperture as larger AoV FF lens?