Here is a reference. Hope it helps with the question 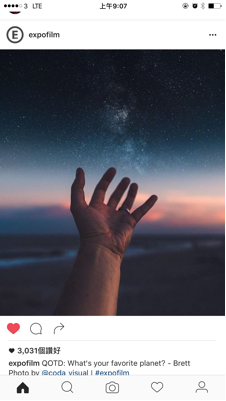 This photo is definitely a composite.

These are examples of what twilight really looks like (I tried to find shots that appear to be as late as possible after sunset): 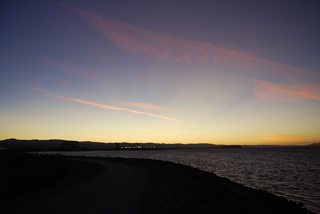 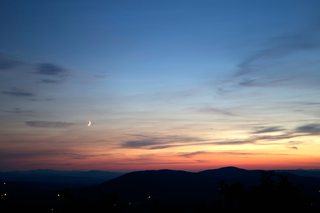 The only way to obtain such a photo in a single exposure would be to take it from above the outer edges of the Earth's atmosphere looking back down through the atmosphere to a horizon. You'd need a huge focal length to make the clouds and surface details that large. You'd also need an appropriately sized artificial arm several miles from the camera to allow enough depth of field to get it in focus.

In such a case, though, the effects of telephoto compression would make the width of the Milky Way much larger in comparison to the thickness of the atmosphere and the size of the details on the Earth's surface.

Perhaps you could find a planet with a much thinner atmosphere with rivers of some liquid that wouldn't boil away at such low pressure as water would and take such a photo from the top of a high mountain. The clouds would presumably be made of vapors of the same liquid. The colors of the clouds/atmosphere would almost certainly be radically different from Earth's and so you'd have to do a lot of post-processing to mask and shift the colors in the atmosphere to make them look like water vapor in an Earth-like atmosphere. You'd also have a problem with allowing bare skin to be exposed in such an environment without the liquid inside the arm boiling, so you're still required to use a fake arm.

Not the answer you're looking for? Browse other questions tagged lens focus filters or ask your own question.

1
Long Exposure phtography with milky way and an object

12
How can I get everything in focus? (Why can't my camera just use all of its focus points at the same time?)
8
Is an EF 50mm f/1.4 the same as 50mm with an EF-S lens on a Canon 550D?
8
Is it possible to use a polarizer and a ND filter at the same time?
12
How do I keep both the background and foreground in the image in focus at the same time?
5
Does "the same" lens, with different autofocus systems, have the same optical quality?
4
Can I use a polarizing filter as a neutral density filter to create motion blur on airplane photos?
23
How to reposition subject in the same place and pose in a series of images over time
2
Will 50mm f1.4 and 85mm f1.8 lenses produce the same bokeh, given the same framing?
6
Hydrogen Alpha Filters (Buying The Right One and How It's Used)