How do I disassemble my Canon 18-55mm lens to repair water damage inside it?

My Canon 18-55mm lens has residue on the inside of the lens. I'm trying to take it apart, but I've tried 8 different screw drivers and these screws won't budge. What else can I try?

Taking apart lens to fix yourself isn't usually a good idea. Due to the precision in optics, lens assembly is only ever really done by professionals who know what they're doing, have access to equipment and usually work in a clean room (plus more importantly can put it back together again.) Sadly being the 18-55 and what it is, it wouldn't be cost effective to get done properly. I'd suggest looking at buying a replacement.

If you need to ask what kind of screwdriver you need to disassemble a lens you probably shouldn't consider taking your lens apart. It's highly unlikely you'll ever be able to get it together again properly.

If you insist on trying it anyway, then proceed at your own risk. We won't accept responsibility for turning your lens into a paperweight.

You need Japanese Industrial Standard (J.I.S.) "000" and "00" drivers to turn the screws on most lenses. They might look like miniature phillips head screws, but they are not. There are also other specialized tools required to disassemble/reassemble many lenses. A jeweler's/watchmaker's type "spanner" is one such tool.

You also need to be very careful not to turn the screws that align lens elements when trying to figure out how to take the lens apart. Some lenses can not even be disassembled without requiring careful optical alignment and adjustment using specialized equipment when being reassembled. If you damage a ribbon cable you will have just turned your lens into a paperweight. Ditto if you even so much as touch the AF position sensor if your lens has one.

Although none of the EF-S 18-55 series of lenses is covered in his blog entry, some of the other Canon lenses are similar in the way they are constructed so you might find it helpful. Roger Cicala of lensrentals.com covers how to disassemble a few lenses that are some of the easier ones to partially disassemble enough to clean parts of the inside. Notice that even he doesn't like to go beyond certain points that require readjusting optical alignment.

There are at least six different versions of 18-55mm lenses that have been sold by Canon, although not all versions have been sold in all countries. Most of them are similar, but not identical, in the way they are put together. The newest, an STM version, is significantly different in construction than the others. The one thing they all have in common is that they are all budget level lenses.

I would advise you to go ahead and find a source for a used copy that can have it to you by the time you need it before you proceed with attempting to disassemble/reassemble your lens.

Need this lens cleaned by next weekend! Please help!!

No you don't. You need this type of lens or similar one by next weekend, but not exactly this unit. Chances are something goes wrong during your "repair" and you have no lens at all.

Your best bet is to look for a replacement for the upcoming gig in the form of a bought replacement unit or a rented one. This puts you on the safe side of having working equipment when you need. It takes the stress away.

Don't get me wrong, disassembling a lens is a very interesting experience and with the right tools it's a piece of cake (see image below) 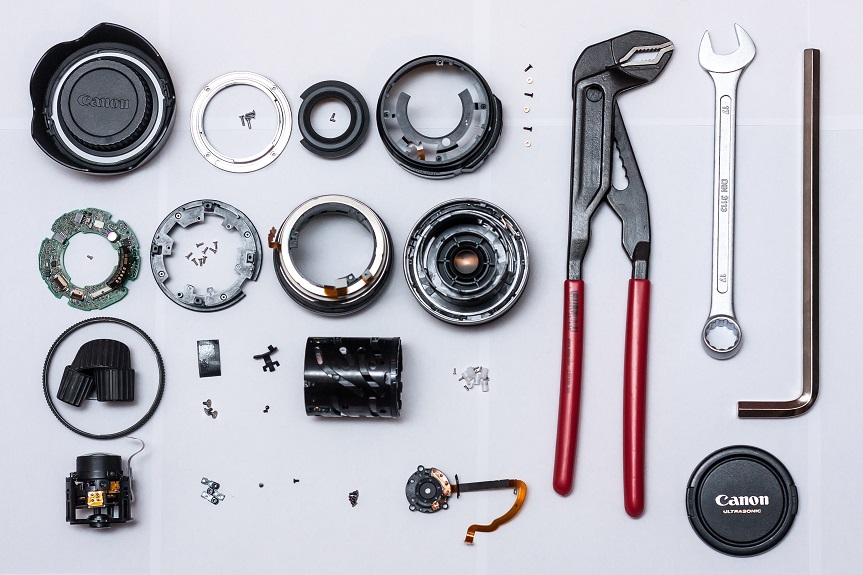 You don't want to do this under pressure though. Especially not if you have no experience doing it.

I encourage you to try it. But don't expect this to work out at all. Consider the lens broken in its current state. Disassembling it then becomes a learning experience. You cannot break a broken lens.

Given that you're talking water damage, and that the lens is probably already trashed, I'm not sure you can do any more harm to the lens if it's not working at all. An 18-55 kit is cheap enough that nearly anything totals it. Just be sure that you've made peace with the fact that you're just as likely, (or more, if you're inexperienced with electronics and lens repair) to destroy your lens as fix it, before trying to crack it open. Have an alternate plan in place (maybe replacing with a used one?) if you destroy the lens. The odds are against you successfully repairing it.

You may also probably have to expend some money on appropriate tools. Most folks tend not to have spudgers, 00 screwdrivers, plastic tweezers, and spanning wrenches lying around, although among this SE crowd, maybe not. :)

Here's a youtube video that demonstrates full disassembly. Hopefully your version of the 18-55 is similar.

It looks like after removing all the screws from the rear assembly (there are a couple on the sides), the back should just lift out, but will be connected by a cable that you have to unplug from the board, so be gentle.

Further screws hold down all the other boards, and there are a number of cables that have to disconnected. And you will also have to go in through the front of the lens, which will require prying up the trim ring with a spudger to access the three screws holding the front element in place, and removing the rubber grip ring to get to the focus helicoid screws.

Good luck on getting it all together again in working order!

Agreed with the folks who said that this lens is probably dead and buried. But if you want to open it as a learning experience.... If it is like the older 18-55 lenses, removing the objective lens is the hardest part. You basically need to cut up a rubber bathtub drain o-ring or similarly sized piece of rubber, making it into a doughnut-shaped ring that covers the plastic part around the front lens. From there, you can press a lens cap against the rubber ring and use it to unscrew the objective lens along with the support ring around it. Getting into the other end is, of course, easy, if all you need to get to are the electronics.

Not the answer you're looking for? Browse other questions tagged lens canon repair or ask your own question.