What is the difference between 'P' mode vs. the scene modes?

Is there any difference between 'P' mode with appropriate settings (like aperture etc.) and a specific scene mode?

E.g., I wanna shoot a portrait. I can use 'Portrait' scene mode or 'P' mode with wide aperture (e.g. f/2.8 or so). Will the results basically be the same? I suppose a camera digital processor does mode-specific image processing in scene mode.

So is it always better to use a scene mode then 'P' mode for a medium-skilled photographer?

Update The question actually is about possible helpful image post processing is presented in scene modes but absent in 'P' mode. Is it possible to do settings in 'P' mode to obtain the same post-processing results?

It is highly dependent upon which camera system you are using. Although they are all similar in "P" mode, there are differences too. In the "Scene" modes all bets are off as there is more variety between different camera manufacturers.

In general, a scene mode such as Portrait might not only bias the camera towards a wider aperture but may also adjust the color/tint to render more pleasing skin tones. This is something the user would need to control themselves via color temperature and tint adjustment or the use of color profiles or "Picture Styles" when using "P" mode. In Landscape scene mode not only will a narrower aperture be selected but the color may be adjusted to give richer greens and blues. A Night portrait mode will not only use slow shutter sync to balance the background ambient lights with the flash illuminated subject in the foreground but might also adjust the Auto white balance to render the lights a little warmer.

Things such as JPEG or raw files, ISO, color, aperture (wide or narrow)/shutter (short or long) priority, sharpening, etc. are all controlled by the Scene modes. In P mode the user has control over many of them.

With most systems the use of scene modes locks out the user from selecting many options that are allowed in the "creative" modes": P, Tv, Av, and M. This even extends to the decision whether to save the raw data or let the camera go ahead and convert to jpeg before recording the image to the memory card.

Is there any difference between 'P' mode with appropriate settings (like aperture etc.) and specific scene mode?

Yes. Speaking from a Canon perspective, P is a "creative" mode and therefore offers a number of settings that aren't available in the "scene" modes. In P you can select your own aperture or shutter speed and the camera will use information from the meter to adjust the other settings to compensate and provide a reasonable exposure. In scene modes like "sports" or "portrait" the camera is fully automatic and will choose those settings on its own, with the particular choices optimized for the type of scene you've chosen.

Many of the other settings, like white balance, ISO, metering mode, and autofocus setting are also out of reach in the scene modes (and other fully automatic modes, like The Green Box). These are all available in the creative modes, including P, Av, Tv, and M.

Other makes and even specific models may have their own takes on the specific differences between modes, but Program mode (that's what P is for) generally lets the photographer adjust shutter speed or aperture.

Now, it's entirely possible that you might get similar results from P as you do from the scene modes if you happen to make choices similar to what the camera chooses in the scene mode in question, but P gives you the creative control to make your own choices while still getting a good exposure. It's basically a marriage of aperture priority and shutter priority modes, where you can choose to adjust either aperture or shutter speed on the fly and the camera compensates with the other. One difference from Av or Tv is (as Michael Clark points out in his comment) that in P mode, the camera will select starting values for both parameters.

So is it always better to use a scene mode then 'P' mode for medium skilled photographer?

No. Many people would say the opposite, i.e. that it's generally better to shoot in P mode than in the scene modes because you have much more control. The scene modes are there to make it possible for even the newest camera owners to get decent shots, and if you find they do what you want and you like using them, you should. But I think most experienced photographers would agree that the shots they get are more likely to match their expectations when they're in control.

We need to understand one particular graph.

EV is a combination of shutter speed and aperture that can be used to measure the amount of light on the scene.

On the lower left corner the least ammount of light and the upper corner more light.

EV0 represents the light that will be properly exposed with f1 at 1s. If we increment the amount of light (upper right) will be EV1, EV2, etc.

The EV increments are the thin diagonal blue lines. As you increment a bit more to the upper right your ambient light on the scene, if you do nothing on your camera will be more and more overexposed.

So we need to interact with that diferent ammount of light changing our settings on the camera. f stop or shutter speed.

This graph represents the compensation we need to make on our camerea. So far so good? 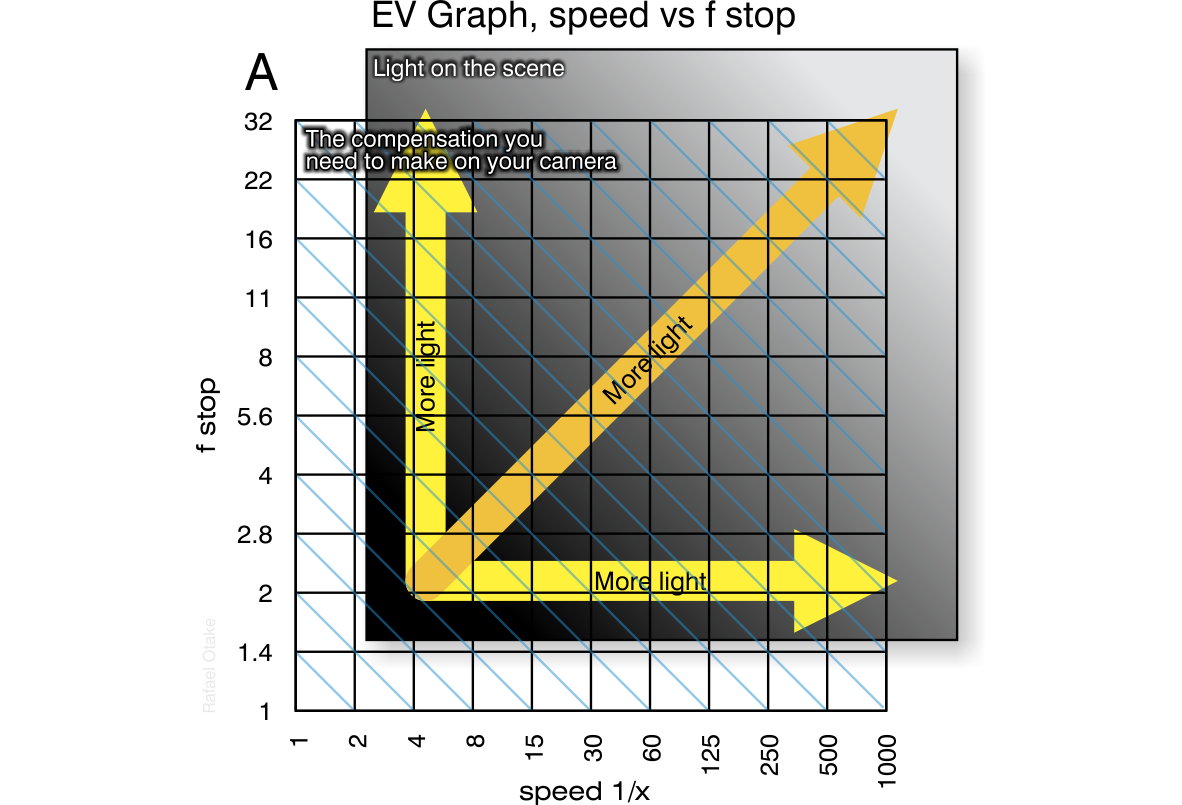 The easiest examples are Aperture priority and Shutter priority.

On Aperture priority mode we define our diapgragm (red) and the camera, as we have more or less light just augments the shutter speed or reduces it.

And on the Shutter priority we define the shutter speed, and the camera adjust the aperture, as far as our lens allow it (blue). 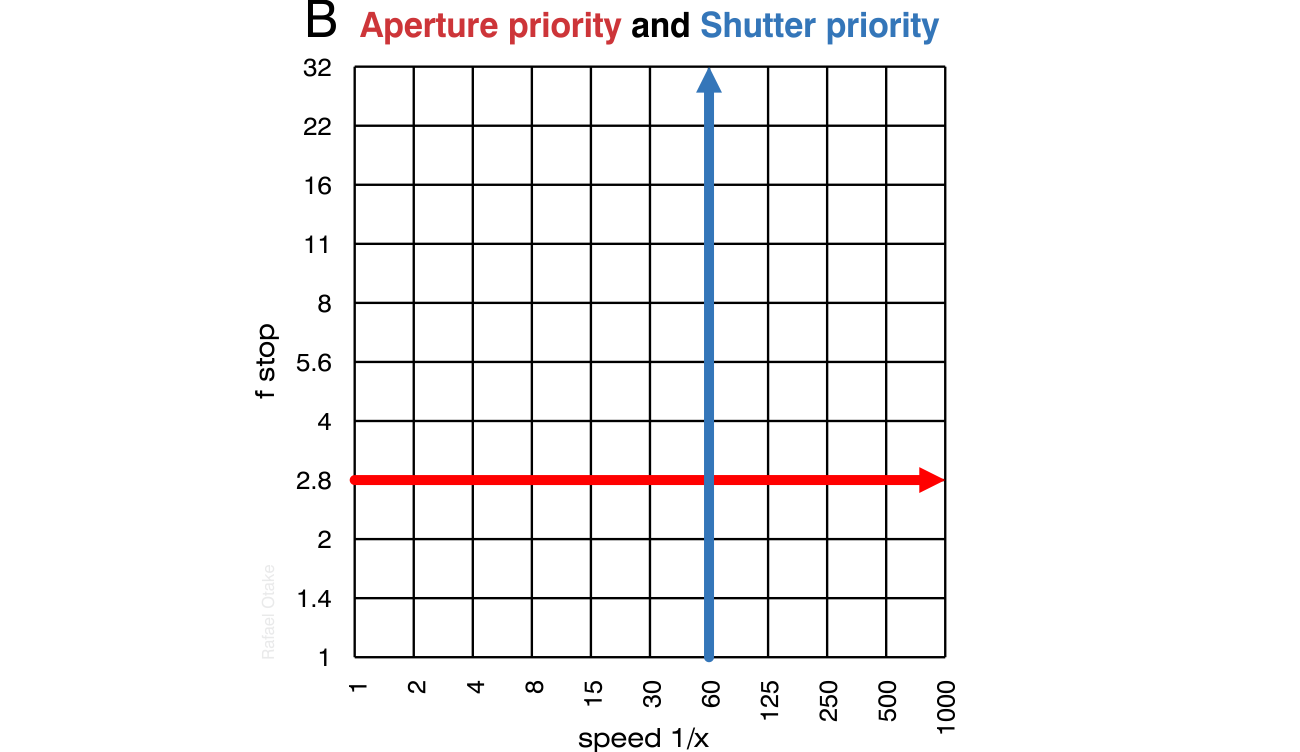 Remember. Starting here you lose control on the aperture and the shutter speed This is what the modes starts to control.

A portrait mode, in theory assumes that we want some bokeh, this is a big aperture, but also that if we have a low shutter speed, we need a flash, so our image is not blurred. So it would be using the widest aperture to some extent. If the amount of light is more than our maximum speed, it starts to close the diaphragm. (It could include a red eye reduction preflash for example).

Sports mode is almost the same case, but for other reason. It does not care about the bokeh, but wants the fastest shutter speed. So it stays open the widest.

But It could think "Oh, I assume that (for example) 1/125 is enough. Probably the user wants something more deepth of field, let us start closing the diaphragm".

Landscape mode could be a little diferent.

It's priority could be focus. So its starts closing the aperture when it can to start focusing more and more. 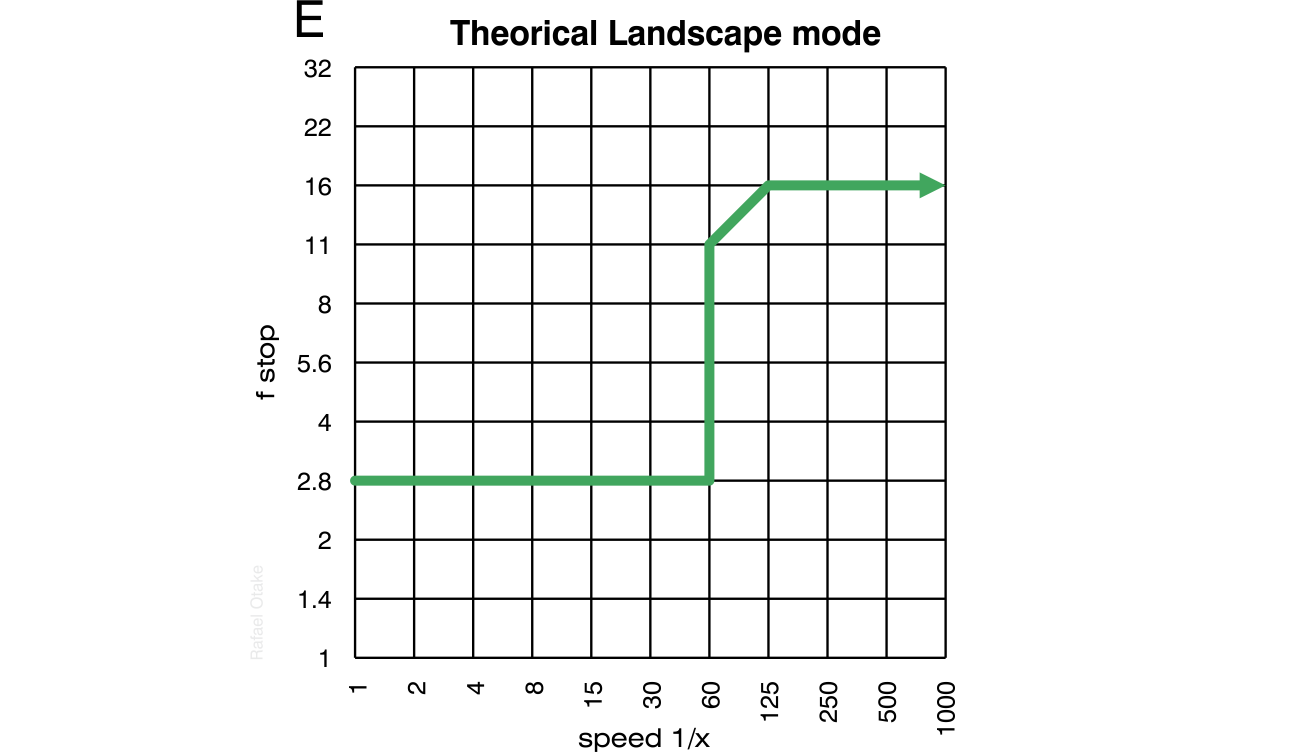 Some other settings that could be affected

This modes could start making changes on some other settings, for example:

The metering mode; On a portrait it could asume that needs to expose right the center of the image, independendly of the background, so I supose they change the metering mode to center weight.

Landscape on the contrary could change the metering mode to matrix.

Soprts mode could start taking control on the ISO speed, if you have it on ISO 100 it could change to ISO 400 or 800 for example.

I thought this modes would leave alone the focus points. But both on Nikon and Canon they are on automatic focus points, they probably adjsut also the "auto tracking" autofocus modes.

Some settings also affect the sharpness, contrast and saturation of the processed image.

Here the program could think... "I have no idea of what a newbie user wants, I will keep a minimum shutter speed before I pop the flash (a). Wait! Does he want to have more in focus? I will close the diaphragm (b) but what if he can not hold steady the camera? I will increase the shutter speed..."

And this goes on an on, untill a minimum workable diaphragm (c) where it could starts producing difraction. 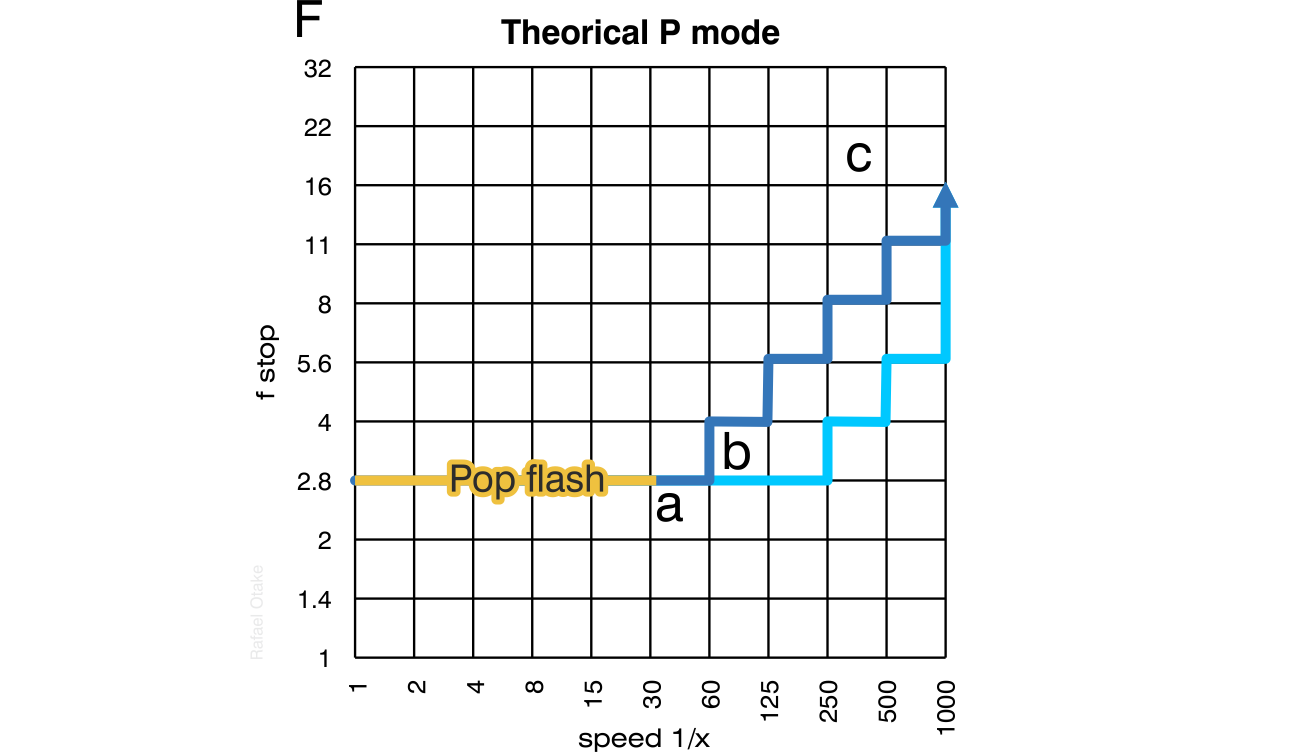 You loose total control on the camera settings. This programs take in acount other factors, like focal length, but also activate some other like ISO Speed, the auto focus points, metering mode. All in Newbiest mode.

The aperture and shutter speed are decided for you. Simmilar to the previous graph. But it will not touch some other settings, like the focus point, the ISO speed or metering mode. You can still alter this initial decision of the camera.

(I feel this is a legacy mode. Back in the days of film cameras you could not change the ISO of an already loaded film, so it was fixed. In my opinion this mode should try to adjust the ISO before messing with the aperture, and try to achive a functional hand held speed, for example)

There are other modes, which I call.. WTHeck are this? A kid, a baby, a horse... I do not have a horse! You need to gess (or investigate) what the thoose mean. A baby? probably won't pop up a flash. Will a horse mode pop up a flash? and If it scares the horse? I do not know if a horse gets scared with a flash... I do not have a horse. Where is the puppy mode? I do have a puppy.

I call them newbies, because you leave to the camera the decisions the photographer needs to make. Of course someone could achive spectacular images with a totally automatic mode. But the point is to know the camera.

There are some graphs out there explaining how a particular camera or brand reacts to this light conditions on this P modes. But personally... who cares!

Just stick to AP or manual modes and learn how to exploit them.

Know your shutter speed limitations when you are holding a camera by hand and the situation you have infront of you, learn how to exploit motion blur, play with ISO speed and metering modes, choose your focus point and focus tracking modes.

P mode is auto exposure (it meters and sets both aperture and shutter speed), but the user has choice of all else (and can shift exposure too). Like Color profile for example. Or in P mode, you can choose Auto ISO or Auto WB, etc, but you can also turn them off and set specific settings.

In the scene modes, Auto ISO, Auto WB, Auto everything, is on.

Not the answer you're looking for? Browse other questions tagged portrait scene-modes or ask your own question.

8
Taking a skyline photo with a person closer to the camera during night time
2
What do the scene modes actually do?