How do I reduce noise, given that I have complete control over everything else?

I want to take some pictures of some crystals. Being crystals, they don't move around much so I can set up my camera and lighting as I like. I have a high-powered halogen light shining on them, and my camera on a tripod above them. When I took photos in automatic mode, they came out being quite noisy, so I did some reading on this site and ... got incredibly confused.

So, what are my best options for taking these photos? Given the set-up, I have no restrictions (that I can think of) on shutter speed, aperture (the crystals are pretty flat so no depth-of-field issues), or ISO. I'm a little loath to do much post-processing to remove the noise since I want to see the fine detail on the crystals. 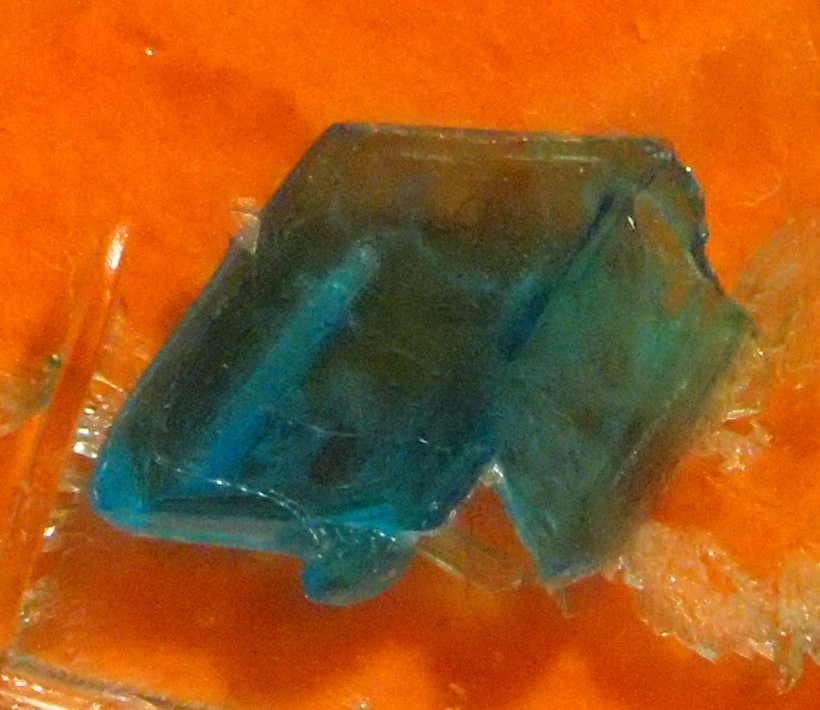 (I strongly suspect that this has been asked before, but I couldn't track it down. So if it gets "closed as duplicate" that'll be fine as it'll tell me where to look!)

I clearly need to do a lot of experiments on this, but using a combination of the suggestions, here's a much better picture of a crystal: 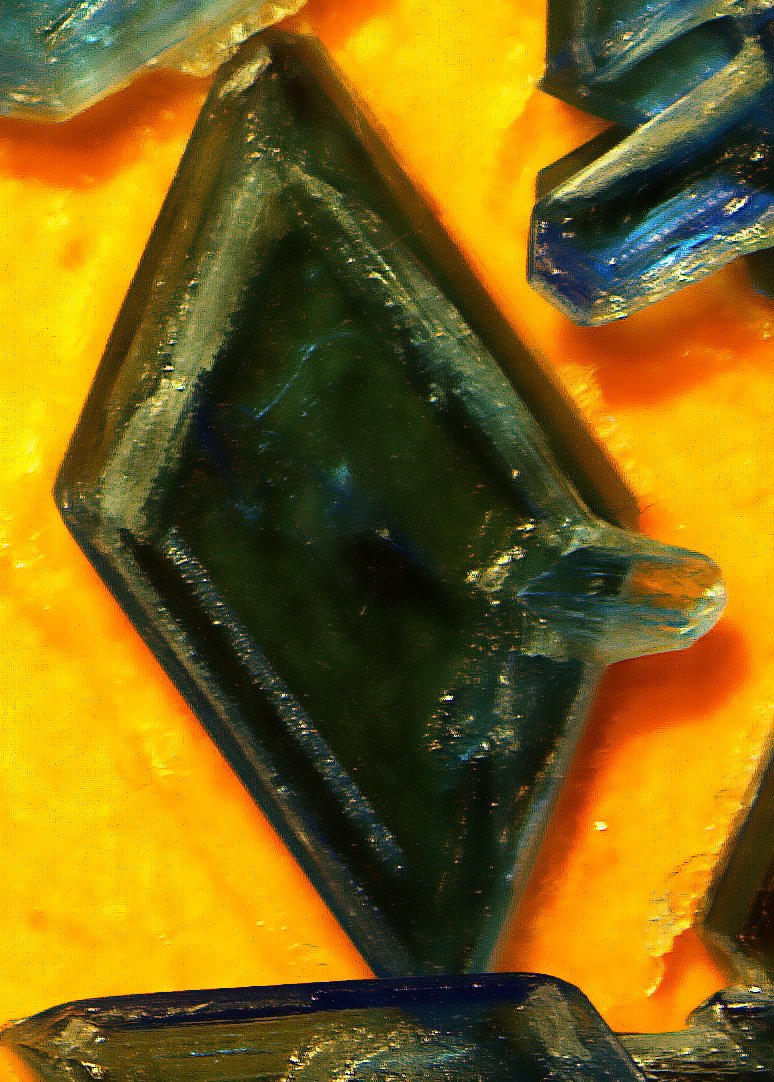 To get this, I shot it in daytime (benefiting from a bit more light) with ISO100, 1/4s, f/5.6. I shot in RAW and did some post-processing (some adjusting of levels, a little sharpening followed by a small blur to reduce the little noise that was there). As I said, many more experiments needed but at least I now know what to experiment with! Many thanks.

The best way is to use the lowest ISO possible (100 is often the best), and slightly overexpose (without clipping highlights), then post process it back down. This will help to decrease noise in the shadows.

Also shoot raw, so that any adjustments can be made before the conversion to jpeg.

To minimise noise get as much light down the lens as you can. As you have a static subject using a longer exposure is probably the best option. Setting the ISO to the minimum value will help you let in more light. Select the aperture based on sharpness, I'd go for something in the middle like f/5.6

For the ultimate noise reduction, consider taking multiple shots and then averaging in software. See:

Here several short noisy exposures were combined to match the noise of single exposure with more light. However the methodology can be applied to several longer ISO100 exposures to further reduce noise! 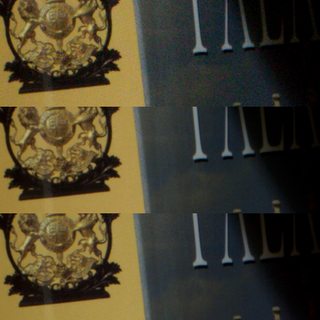 The top section was a 1 second exposure with a really small aperture so quite noisy. Averaging 16 such photos in Photoshop resulted in the middle section, with much reduced noise. The bottom image, for comparison was the result of a single long exposure.

The last image was shot at ISO100 so I couldn't use a longer exposure without overexposing and clipping highlights (I could have closed the aperture further but that wouldn't have allowed any extra light into the camera). By combining several ISO100 shots of this length I can increase the amount of light, effectively simulating the result of using an ISO setting lower than the camera could ordinarily produce.

A standard piece of advice for minimising noise to "expose to the right". This means place the histogram as far to the right (highlight) end of the scale as possible, without overexposing.

An article was posted in the comments to chills42's answer which claims:

"Expose to the Right" is just plain wrong

Here is the article

I repeated the high ISO part of the experiment with a Canon DSLR instead of the G10 compact, and most importantly I turned off noise reduction (the author let the G10 do it's own thing with noise reduction, with no attempt to keep it consistent).

The part I wanted to specifically test was the claim that by reducing ISO alone you could reduce noise equivalent to exposing to the right. I wanted to test this because this goes against both the theory of how noise originates and all my experience. 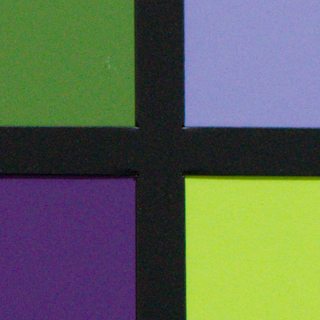 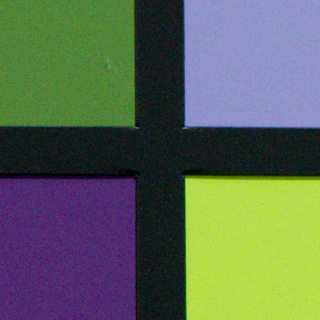 It looks similar, but there's ever so slightly more noise (see the composites at the end). 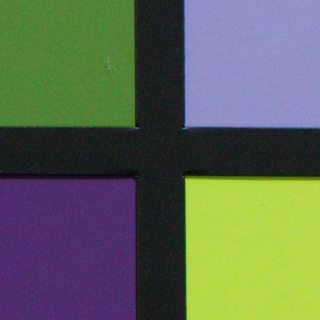 A clear reduction in noise results. Here are the same images, presented in the same way as the chromasoft article. Firstly the camera metered exposure with the lower ISO image offset in the centre: 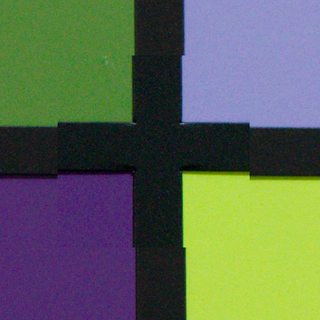 Finally, the camera metered exposure with the expose to the right in the centre: 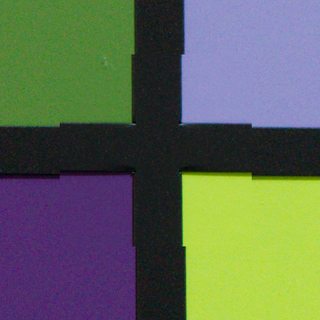 Finally the article does have some useful things to say about exposing to the right causing problems with colours (you get loss of saturation as you approach the limit of the sensors saturation point). But on noise it is demonstrably wrong.

Set your ISO to as low as you can. And if you'd like, take multiple exposures and average the results.

Because you're on a tripod, the shutter speed won't matter so much. One thing that will definitely help, though, is to use the timer function (ie, take the shot 10 seconds after the shutter is pressed) so that you're not touching the camera when the shot is taken. This time will mean that any vibrations from you touching the camera to set everything up will be damped by the time the shutter fires, so the image should be sharp.

Two things cause noise in your pictures: amplifying the sensor (higher ISO), and longer exposures (> 1 minute). What you want is a good balance between them. With the Olympus E-PL1, you probably won't be able to tell the difference between ISO 100 and 200 but you will start to see noise start affecting your picture as early as ISO 400 (based off of the DP Review). Also, for some reason jpeg seems slightly less noisy than RAW, but jpeg will degrade with every edit.

To get optimal noise results with your camera, you want to put your camera at ISO 200, aperture priority or full manual, f/9 - f/11 and at least 12 inches away, and whatever exposure time is necessary. If your required exposure is approaching a minute (the max on your camera), find some more light. An effective way to add a lot of light is to use a flash, but you'll want it mounted away from the camera so you aren't bouncing light off the mineral into the lens.

There have been some great suggestions so far. I have a more off-the-beaten-path suggestion, however, in case you want to get the absolute maximum quality, clarity, and detail you can.

It looks like you are doing some macro work, so I understand that your DOF is very thin. At a wider aperture, you should be able to use ISO 100 at decent exposure times, at the cost of even thinner DOF. You can compensate for the thinner DOF by taking multiple exposures with an increasingly distant focal plane, and stitching them together with a depth of field stacking tool like Combine ZM. This is a common technique amongst macro photographers who use the Canon MP-E 65mm 1-5x Zoom Macro lens, which has a DOF as thin as 0.02mm at maximum magnification AND an aperture of f/16.

Keep the temperature of your camera low to keep the thermal noise to a minimum. At the very least, this means not taking pictures after it's been busy for a while. Hot lights and hot rooms also work against you here. Things that draw a lot of power will generate more heat too. The LCD is a factor here; things like Live View (on-screen viewfinding) and video mode can heat up the camera faster.

Noise from heat can increase the image noise significantly. Here's one experiment:

Cooling a Canon 350D results in less camera noise being present in raw images... For the cooled camera the measured noise level after 40 exposures was a whopping 40% less than in the uncooled camera.

And this isn't "put the camera in the freezer" cooling; the temperature was kept at a room-like temperature of 18C.

Switch to an aperture priority mode, use an aperture between probably 8 and 16 to make sure the whole object is in your depth of field, lower your ISO to 100 (or as low as your camera goes), set it up on a tripod, and click. You'll have a much longer shutter speed, so some stable surface will be necessary.

Its mainly your high ISO on a smaller sensor thats killing you here. Your camera doesn't know that its on a tripod and shooting a static object, so it thinks you need a reasonable shutter speed to handhold, so its increasing your ISO.

Lots of good answers thus far but I did want to mention one other consideration: if photos with an absolute minimal amount of noise are critical, you might want to consider a different camera. The larger the sensor, the less noise you'll see (all other factors being equal). A micro 4/3rds camera has a smaller sensor than a APS-C (crop sensor) DSLR, which is smaller than a full-frame DSLR.

I'm not suggesting you rush out and buy a new camera, but if low-light, low-noise photos are important the sensor size should be a consideration in your purchasing decision.

Using a tripod allows you to use slow shutter speeds, thus allowing you to use lower ISO, resulting in less noise. More importantly, a good combination of your light and some reflectors will get you the best image that you want.

I know of only two ways to really control noise: correct exposure and more pixels. I know this sounds snotty, but it's true. Use logic when you set up. Correct lighting means bracketing; more pixels means framing: frame the shot, zoom the lens and shoot again, or better, if you can, move closer or further away.

Not the answer you're looking for? Browse other questions tagged macro noise-reduction or ask your own question.

24
How can I reduce the noise present when taking pictures without lowering my ISO?
28
Is there any noise difference between averaged and long exposure photos?

24
How can I reduce the noise present when taking pictures without lowering my ISO?
4
How can you reduce noise in Lightroom 3?
3
What is a good amount of noise reduction to apply in post-processing?
9
How does averaging images or lowering resolution reduce noise?
4
How do I stack two photos in Photoshop to reduce noise?
3
How to reduce noise shown in LiveView when photographing in the dark?
4
How to reduce large, agressive color noise?