How can I improve the sharpness for tabletop still life of photography?

I have a Nikon D5100 DSLR with a 18-55mm lens and a 55-300mm lens. I'm shooting with a tripod (and remote) over a table top where I've arranged flowers and other miscellaneous things, using mostly the 18-55mm lens. I photograph outdoors on overcast days.

After editing, I'm still not happy with the sharpness of my images. Is it the camera? The lens? Is there something else that I can do to improve my images? I want to be able to print them out to at least 16x20 inch size.

I shot in aperture priority and played around with adjusting aperture. I do think the stopped down ones gave the best quality (about F/4). I shoot in Raw.

I know I don't have high end equipment, and I'm hesitant to pour a ton of money into this, but can anyone share any suggestions to make my images better? Am I using the wrong lens? Is there a better one that I could buy for what I'm trying to do? Thank you so much!! 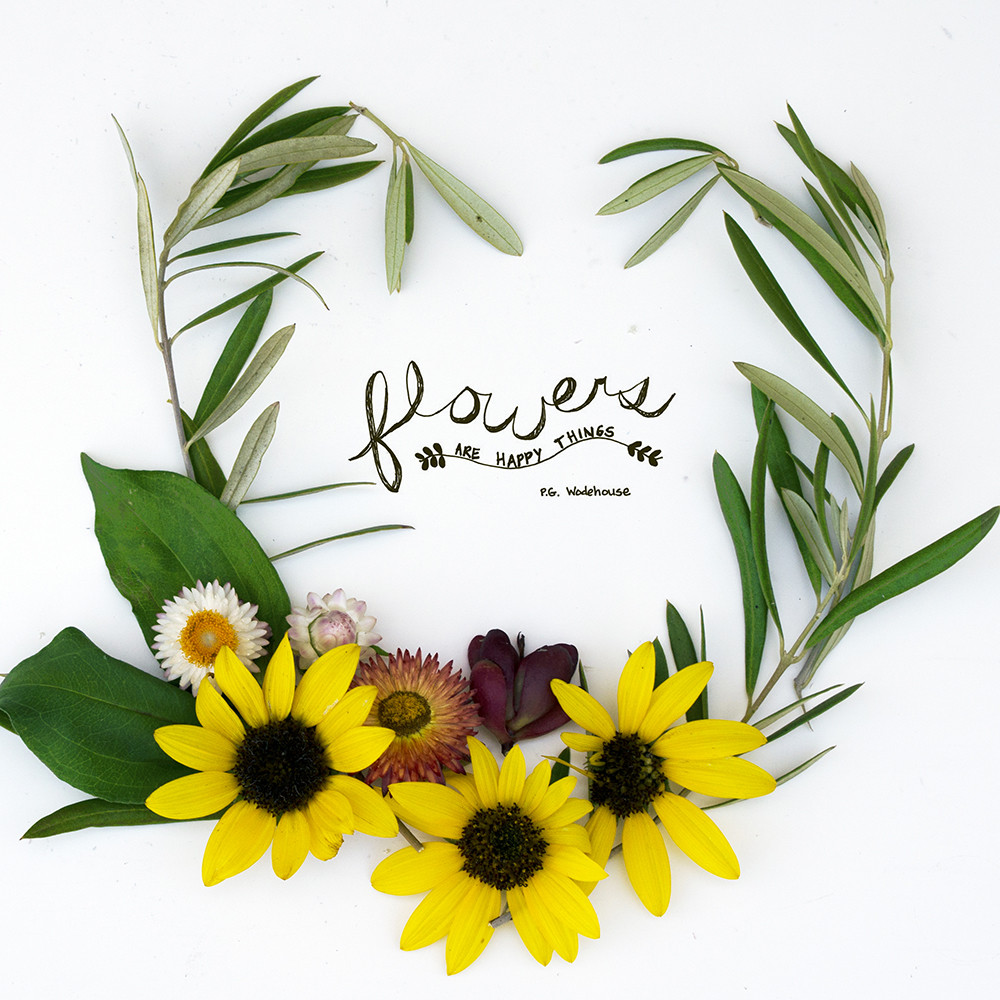 The kit lens is extremely soft wide open and remains noticeably soft until F/6.3 at least. Around F/8, it gives better results but never gets tack-sharp. Stopping down further only goes so far since you will already pass the diffraction limit at F/13.

For this type of work, it is best to get a macro lens which is designed to give uniform sharpness and little distortion. Nikon makes a few and so do third-party makers like Sigma and Tokina. Considering that you are shooting from a tripod, you can control framing and do not need a particularly bright lens, only one which is sharp. There are Nikkor 40mm and 60mm macro lens which Nikon calls Micro and are worth considering. Both these are F/2.8 lenses and will give very sharp results between F/4 and F/5.6.

Keep using the tripod, this is essential for getting maximum sharpness. Use a low ISO such as 100 to 400 to get the cleanest images and good dynamic range. Make sure your subjects are still. So shield them from the wind as much as possible.

To add some data to the other answers, a great resource is DXOMark - it has test data on a huge number of lens/body combinations. The 18-55 has no test data for the D5100 but I'm using the data here from the D7000 which has the same sensor.

Here is the Perceptual Mpix map, which provides a general overview of the perceived sharpness of the lens sampled over its range. This is an absolute measure so this is the one you need to look at when comparing between lenses. 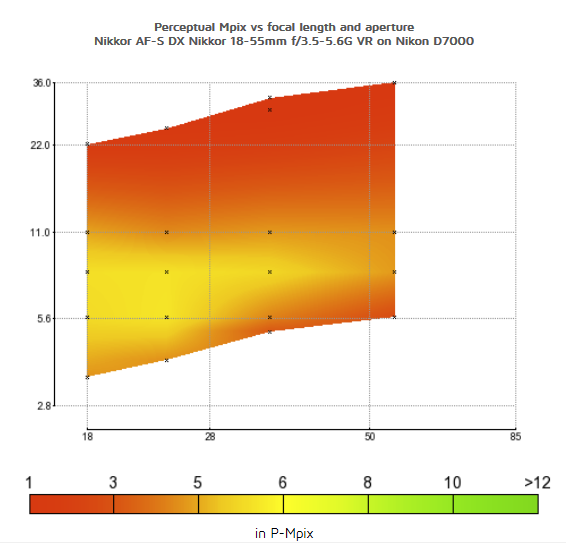 At a glance, we can see this is not exactly a stellar performer. To find the lens's "sweet spot", however, we need to dig deeper. It may not be the best lens out there, but if you're looking to make the best of what you've got let's see what we can do.

We can look at the sharpness global map, which can give us center-sharpness or 1/3, 2/3, and edge-sharpness maps. The acutance global and field (to follow) maps are now relative indicators - these compare the lens to itself so you can't compare these maps between lenses. 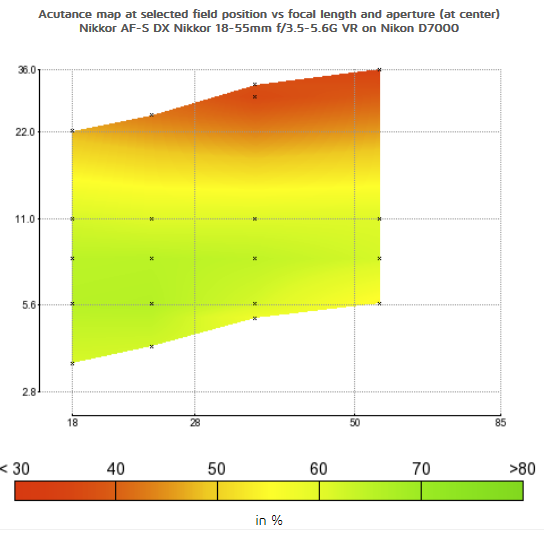 From this you might think F/8 is fine across the range, but thankfully there are also field maps which can show you the full image sharpness at each setting. 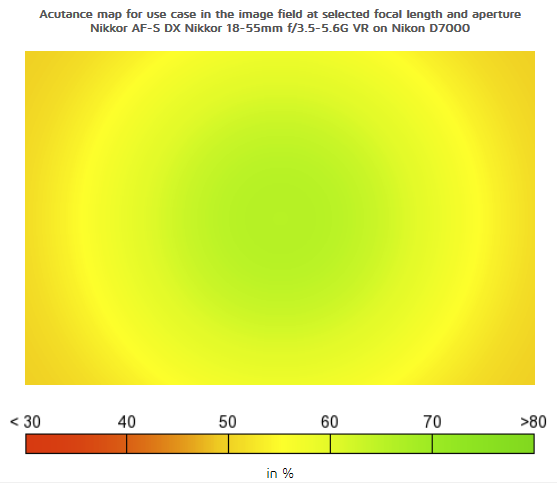 Sharpish in the center, but falls off to fuzz in the corners. Maybe acceptable for portraiture, but probably not what we want for still life. You said you shot the example picture at F/4 - you can only get this aperture at 24mm and below, so let's look and see what that gives us : 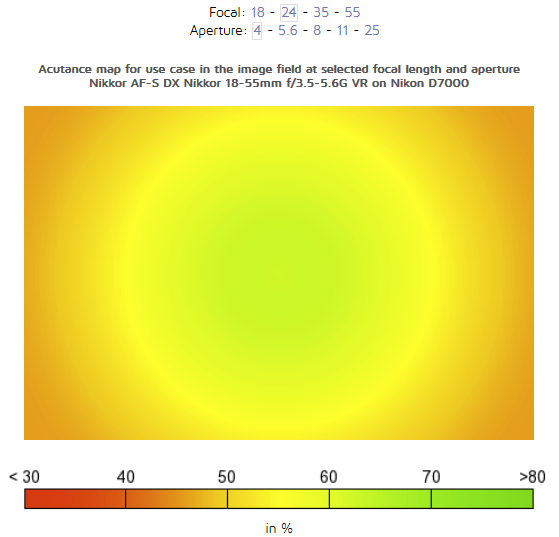 Eeep! Not exactly what we're after.

We know from above we'll find our best performance around F/8, so let's compare a few focal lengths : 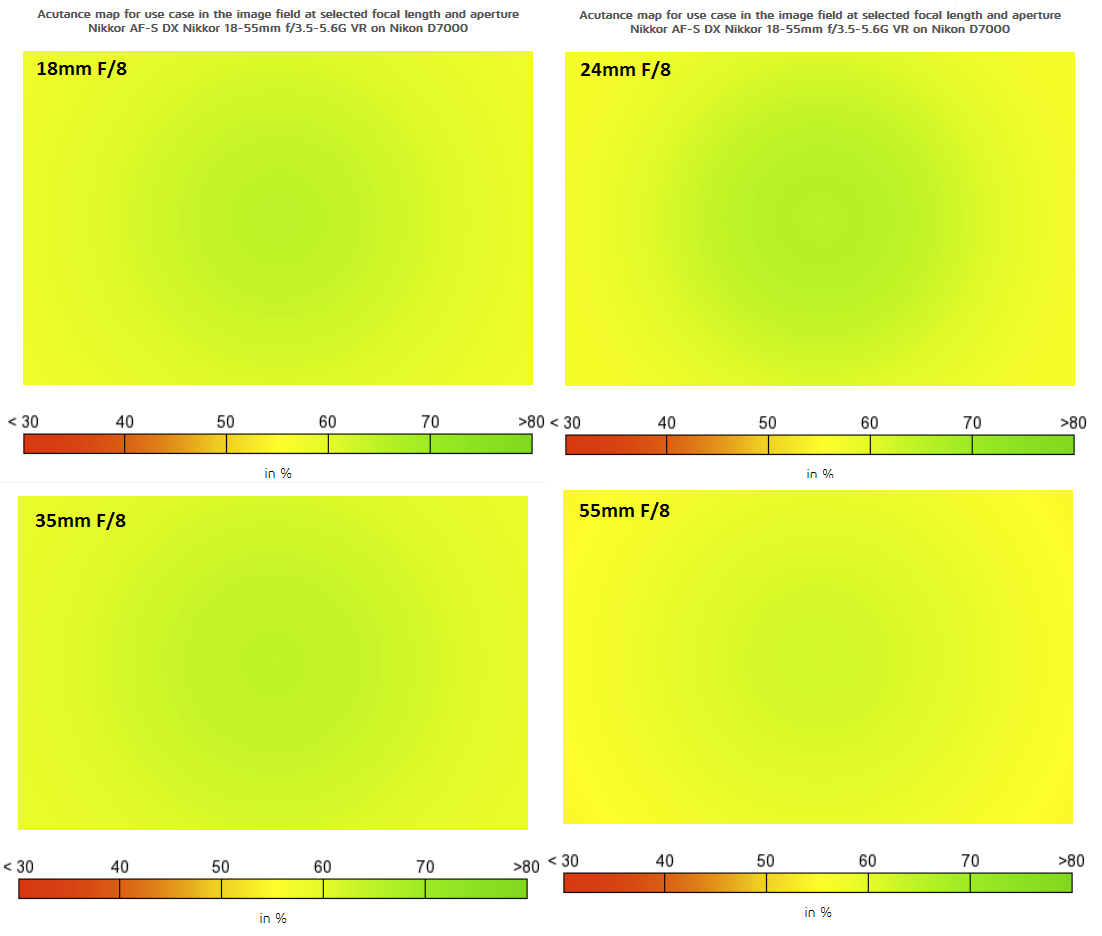 So it's clear here that field sharpness is slightly better fully wide at 18mm, dropping off a bit to 24mm, improving again at 35mm, and then falling off at full zoom to 55mm. So, if you didn't want a new lens but wanted the sharpest full field shot from this lens you'd probably want to be shooting at 18mm, F/8 or 35mm, F/8. 18mm is probably too wide for still life and you'd need to correct for the distortion so 35mm F/8 is probably where you want to be.

For your 55-300mm lens we can go through a similar exercise and find 100mm F/8 to be the sharpness sweet-spot of that lens - shooting there would give you the best performance between both lenses as the 55-300 can be a bit sharper than the 18-55. 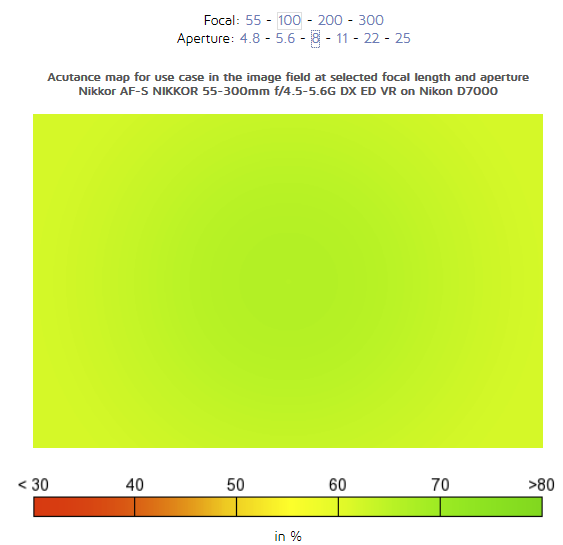 If you wanted a really cheap improvement and you like the 50mm focal length to work with, the Nikon 50mm F/1.8G is cheap and gives good performance at F/5.6. It's also less than half the cost of the Nikon 60mm macro and even cheaper than the 40mm macro.

It's important to note here that, when comparing lenses, the field maps are always relative indicators versus the lens's peak sharpness. The PMpix maps give a better point of comparison between lenses as they show an absolute level of sharpness. Here the field map of the 50mm and 18-55mm lens look similar, but the absolute sharpness of the 50mm is far superior when comparing the PMpix map in the first image above.

Others have already given good advice to get better results without new equipment. If you do end up going down the Nikon micro/macro lens route its worth noting two things.

Not the answer you're looking for? Browse other questions tagged sharpness still-life or ask your own question.

2
How to take sharper images indoors, scene with all objects in focus?