When I look at the black and white photographs from professional photographers, I notice that they have a special look. Not a specific style—obviously each photographer has her own style—but a look which make them different from similar color photos, a special feeling, which makes them shine specifically as black and white and makes color irrelevant.

When I convert my own photos to black and white in Lightroom, they don't have any special look. They just look like any other of my photos, simply converted to black and white. I imagine that there are two reasons for that:

Let me show some examples. Are those scenes not great for black and white photos in the first place? Or can they be salvaged through proper post-processing?

First, a poorly done photo from Scotland with dubious composition and very poor colors that I was unable to correct in Lightroom.

The same image in black and white isn't much better. The difference between the trees and the grass on the hill is barely visible. Houses on the hill fade with the sky much more than in the original version. 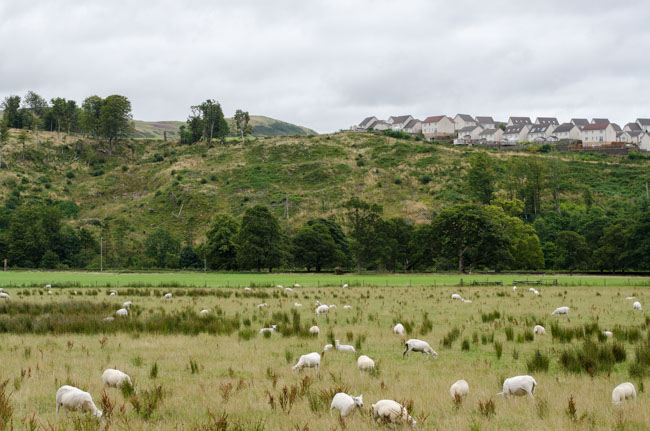 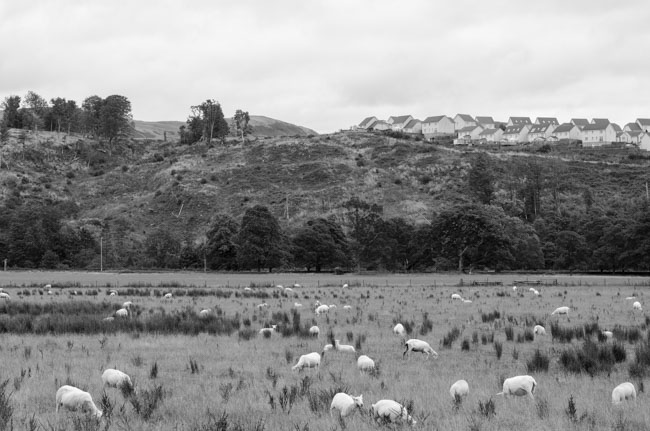 Here's a photo of a cute pet.

In black and white, the gap between the mouse's ear and the background is barely visible. There is absolutely no benefit compared to the original. 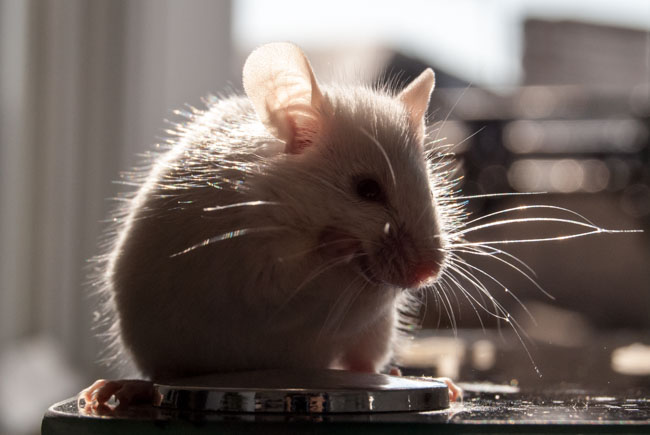 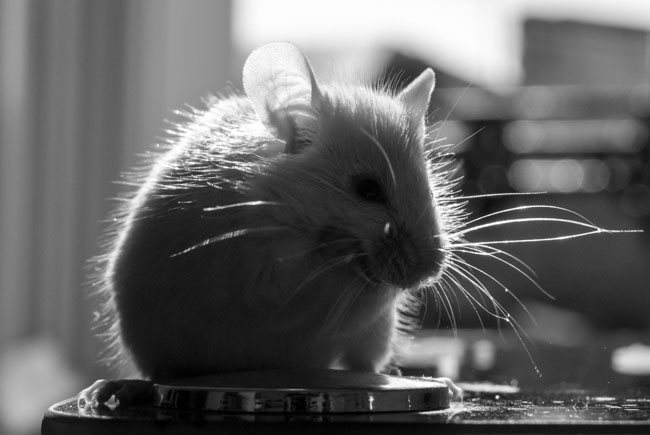 Finally, an example of a much more contrasty picture. The black and white version is weird, since the lack of color makes it difficult to understand whether the soil is the actual sand or something else. I find the sky to be weird as well, and making the blue channel darker or lighter in Lightroom haven't changed that. 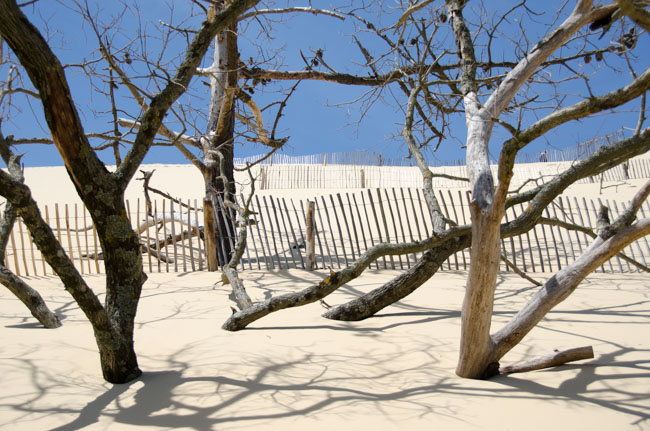 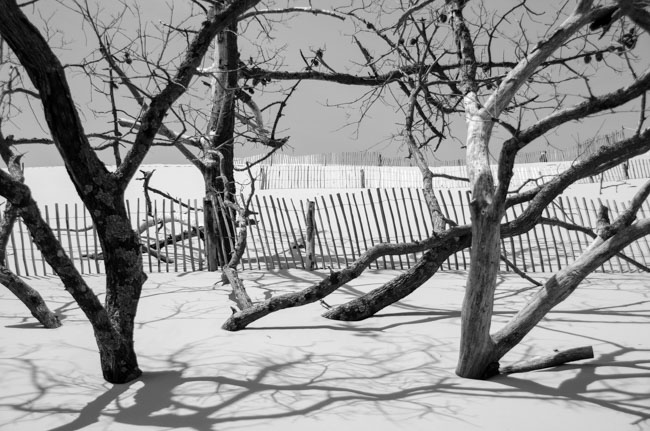 Your question seems to be hinting around trying to ask, "What am I missing in the works of the great B&W masters?"

Here's what you seem to be totally missing about how the masters take B&W photos: They use color filters to change the tonal values (how bright or dark a shade of gray is) of different colors that would otherwise be the same shade of gray when converted to monochrome.

For more, please see the links embedded in the previous paragraph as well as this answer to Are there reasons to use colour filters with digital cameras?

There are a few specialized digital cameras that record only monochrome light. But if the camera used is color sensitive many of these filters can be simulated using post processing tools such as Lightroom. The limitations of a digital camera's dynamic range means better results can usually be obtained by shooting with a filter in front of the lens and sensor before the light is recorded by the sensor. Changing the color temperature in post will also affect the tonal relationship of different colored things in the scene.

Beyond that, good composition is even more important as you don't have different colors to help draw the eye from one place to the other in your photo, you only have various tones of gray. 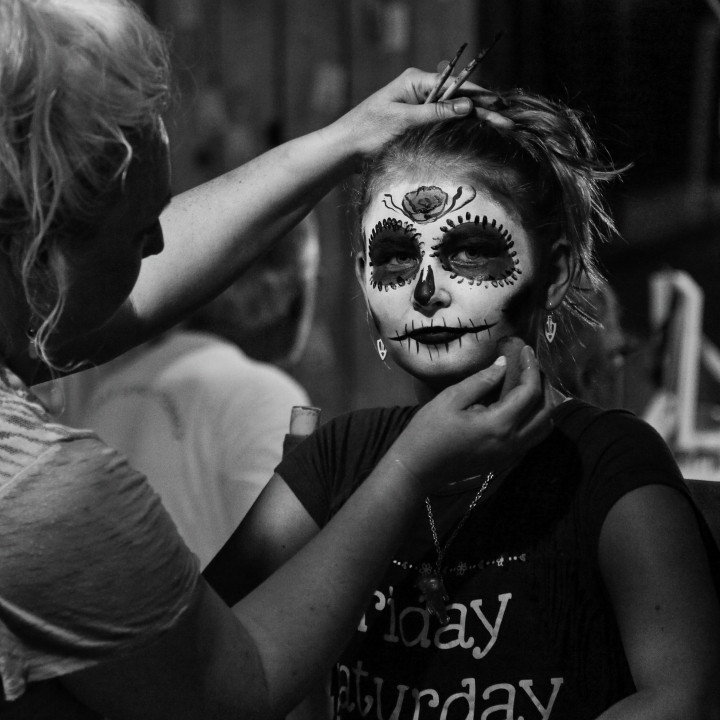 You are doing things backwards. Composition comes from black and white. A great photo will be great in Black and White or Color because of this. If a photographer choses to include Color its to enhance what is already a good Composition... that is if they know what they're doing. Otherwise they're using Color to try and compensate for a photo that really isn't very good.

Do exercises to improve your composition. Things like focal points, depth of field, contrast, leading lines, geometries - all of those things will improve your black and white which will again in turn improve your color... and in that order.

Realize that it all comes down to light.

That brings us to the post processing step you're missing: dodging and burning. And to expand I'll add any form of adjusting contrast and light values in localized areas.

I'd really encourage you to think Black and White first. If its good in Black and White then its at least that good in color. If you have an Electronic Viewfinder or can even set your screen to Black and White give that a shot. Look at the image after taking it until you get better so you can immediately see if the shot worked or not. If you're shooting raw you can still have all the color when you load it but at least you'll know you've got a solid composition as your foundation. With practice and time you'll be able to see that without such aids.

Take the time to watch this video I think it'll really help you a lot: Bridging the Gap: Classical Art Designed for Photographers

Hills and goats with minimal midtones

Not really how much can be done with this image, but here goes: 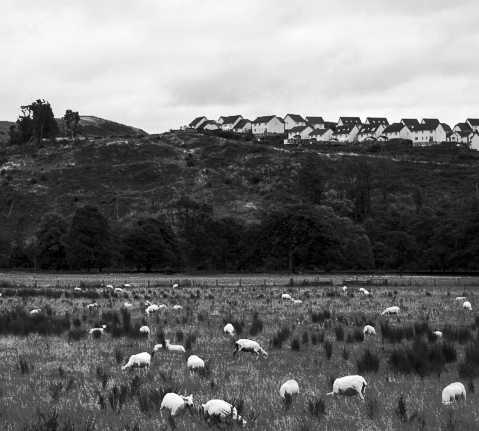 The mouse is white 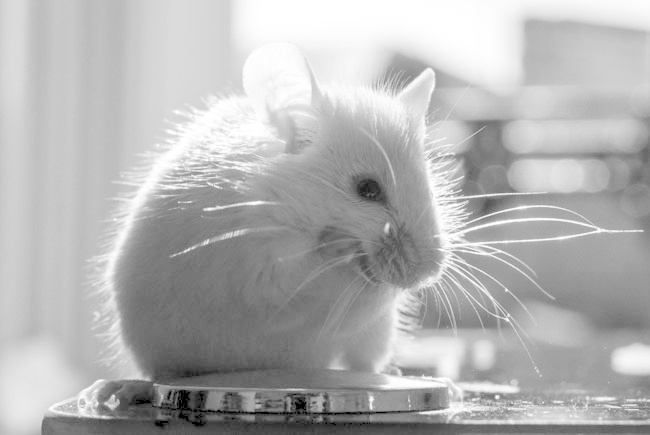 Midtones strongly biased lighter. A darker background might have made a more interesting image. 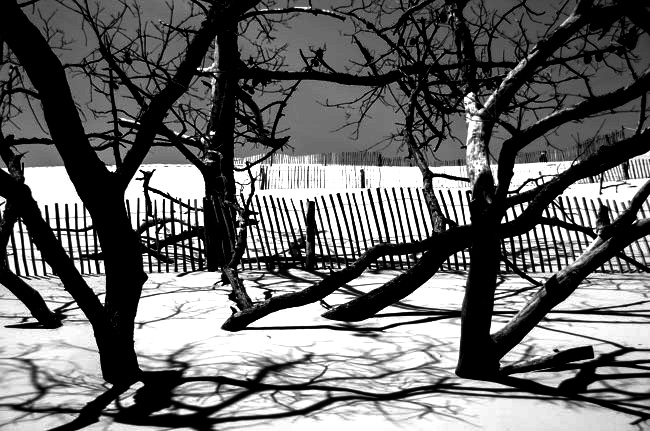 I think this is a topic for a book or a large article, but let me at least comment on your sample images.

Picture 1 You consider the picture "poorly done". Poorly done pictures certainly aren't the best source material for great B&W. Start with something more interesting. That said, B&W conversion could be used here to add more separation to the green tones. You could also probably improve the sky more effectively than in color (some more drastic manipulations do not look so bad in B&W as they do in color)

Picture 2 The image is already almost monochromatic. There is not much to gain by desaturating. Pretty much any image manipulation will have almost the same effect on B&W and color versions.

Picture 3 I think this one is the best candidate for B&W experimenting out of the three. There is the blue sky, which will allow manipulating the darkness almost from white to black by dragging the color sliders and you can interactively watch the visual impact. Darkening or lightening large part of the image will have dramatic effect. In addition, the sky is almost an ideal third, while the middle third is made by the fences and the bottom third by the shadows, so there will be impact on some basic compositional principles that you can try emphasizing. This image is also very graphic and you can change contrast and other parameters to the extreme to make it more stylized.

As far as post processing and Lightroom is concerned, contrast will have a big impact on the look of your black and white photos. You can use the contrast slider as well as the highlights, shadows, whites, and blacks sliders to get the look that you want. Also the black and white mix sliders are extremely powerful. This video shows some good examples of what you can do with black and whites in Lightroom.

It's a different mindset. It is an expression of the subject by the photographer.

Shooting in B&W is an exercise primarily in composition. You are looking for relationships between picture elements in terms of light and dark as well as their interrelationships within the frame. Black and White has a "meaning."

Shooting in Colour is an exercise primarily in mood. You are looking for relationships between picture elements in terms of hue and the feeling created with the overall colours and their accents to complement or contrast the dominant one. Colour has a "feeling."

You can remove the colour from a shot but it will fall apart if there isn't some strong composition to grab and hold the viewer.

You can colourize a B&W shot to enhance its subject which will almost always impart a mood or feeling due to the emphasis.

Not the answer you're looking for? Browse other questions tagged post-processing black-and-white or ask your own question.

2
What technical terms or rules of thumb do I need to understand for a black and white conversion of a photo?
64
Are there reasons to use colour filters with digital cameras?
10
What is the difference between “color” and “tones”?
3
How to create a gray/black color background in a photograph
1
Is the B&W setting on cameras like the PEN-F no different than using Photoshop?