One of my biggest challenges is maintaining a constant range to the subject when taking a macro panorama.

This comes up, for example, when photographing tree stumps for dendrochronology. There is a large tree stump and the photographer needs to take a mosaic of macro shots to document the face of the tree stump. So, for example, the tree stump might be 30 inches in diameter and photo will cover a 5-inch square area or so. Therefore, there might be around 20-24 different shots total which all must be stitched together to get a master image of the entire stump.

The problem arises as to how to keep the range to the stump constant. If the height of the camera above the stump surface varies even a little, then the apparent ring sizes will be different which is bad. Using stands or rails does not work because often the stump will not have an even surface and the ground will be very uneven, so trying to use any kind of fixed structure is not really feasible. Also at the edges of the stump there is no place to set the stand anyway. Even assuming I spent hours setting it up, a 4-way 40 inch precision macro focusing rail system would cost like $10,000 which is way out of budget for me. Also, these stumps are sometimes in remote areas, so simply carrying a 40-inch rail system up some mountain is out of the question.

Ideally, what I think is the right type of solution is to use a set of registration targets and then adjust the camera so that the targets have the exact same dimension in each frame, but I do not know exactly how this is done. How do I know that a dimensional target is the same size in different shots? 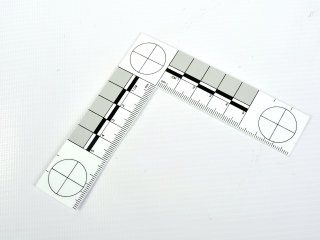 2/ Ensure that all of the photographs are a) in a known order as this makes things a lot simpler, especially in for things like tree rings where it may not be obvious what the order is visually & b) overlap the shots by a good amount, ideally each section could overlap by 50% and then stitch them using Panotools Hugin:

If you use a regular workflow a lot of the process can potentially be automated - personally I would look at placing the scale at a fixed position in each image and using OpenCV & Python, both also free, to locate the scale and get values for Exposure, Scale/Range, Skew & Barrel distortion, control points, etc. and then generate the processing chain for hugin - this can be as an external python script or a hugin plugin. There are a number of developers, contactable through the forum who would probably be able and willing to assist with this some for a fee and others out of interest but obviously with less time to dedicate to it in the latter case.

A partial solution to this problem, that at least allows manual alignment and stitching of the tiles after the fact, is to make a rectangular stencil out of flexible plastic or card. On all four sides of the stencil, include distance markings. Place this around the area that you're photographing as you snap each tile. By using a flexible material, the stencil should match the contours of the stump.

A quick and dirty illustration of what I mean: 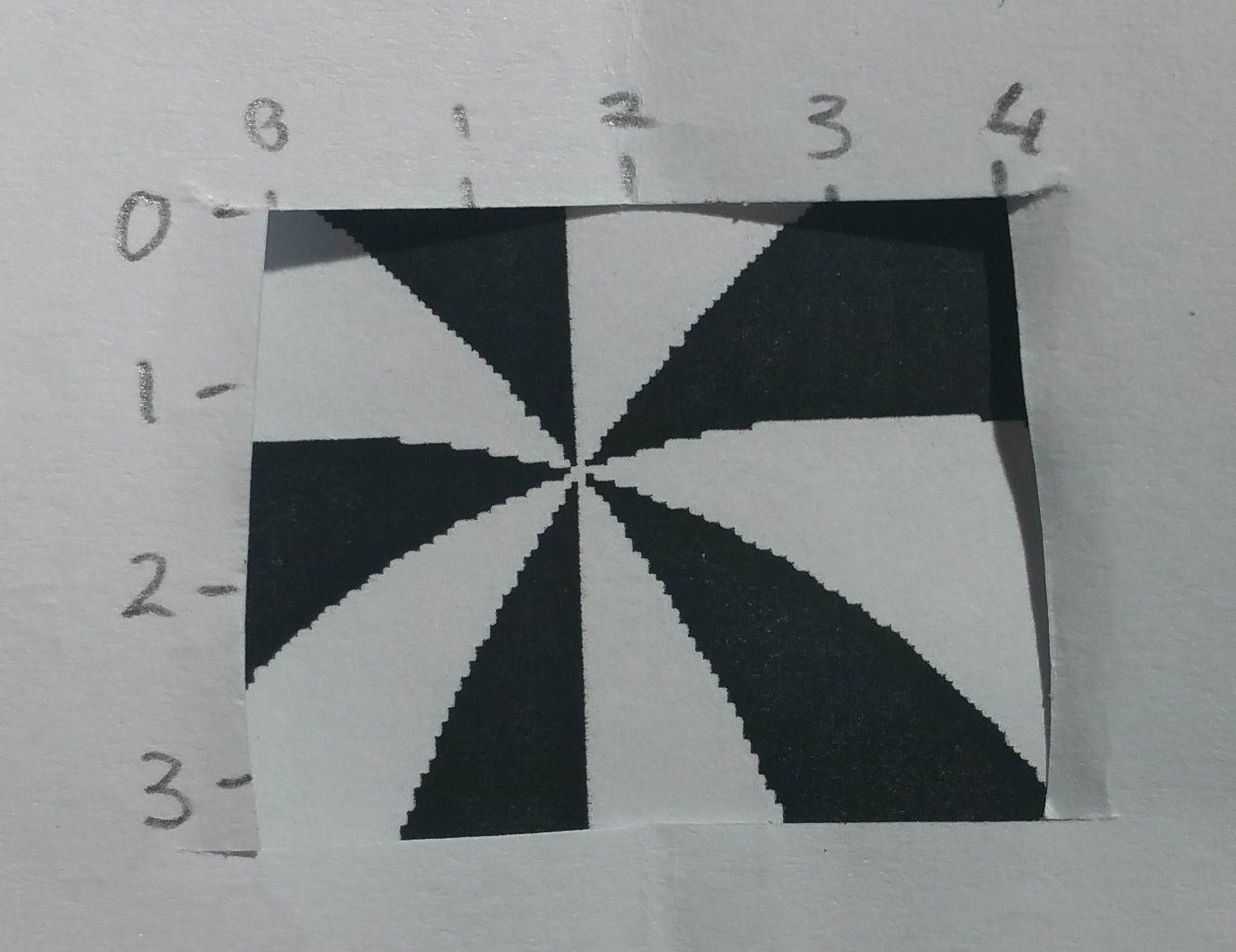 You say that you are taking a macro shot, so the distance scale at which you're photographing is probably small enough to treat the stump as flat, albeit at an unknown angle, in each individual photo. If this approximation is accurate (i.e. your photos are small enough) then the two distance scales provide enough information to rescale/resize each mosaic tile image to the same relative size. You can do this by rotating and rescaling both axes of the image as necessary. You can then stitch these `mosaic tiles' together in an automated way (the methods of which are beyond me, although you hint that you are already doing this) or, as a last resort, you are able to do it manually.

I don't have personal experience with this, but a technique which I think I must have read about in spy novels is to use a plumb line. If you want to get fancy you could add a spirit level too. There are commercially available spirit levels which fit into the hotshoe mount; I haven't managed to locate any commercial plumb lines for photography, but it shouldn't take much DIY skill to attach a plumb line to a quarter-inch screw.

The hack for this kind of problem is to make/use a portable camera copy stand. The bracket is made of light weight materials and maintains a fixed camera distance from the subject. Either plastic or wire can be used to make the stand/framing bracket. The camera faces directly downward and is repositioned after each shot. 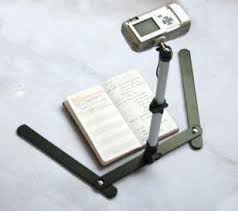 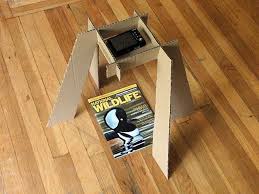 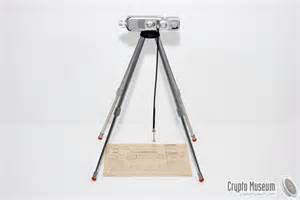 A series of overlapping shots is taken in rows and columns that covers the surface of the subject by moving the stand around the subject. As each shot is taken perpendicular to the plane of the object at a fixed distance determined by the length of the bracket legs, the overlapping shots can be stitched accurately together in a photomontage.

Furthermore, no other alignment tools are necessary and the subject plane can be at any arbitrary angle including the vertical surface of the tree trunk itself.

The problem arises as to how to keep the range to the stump constant.

Given the absence of a mechanical solution that would fix the camera height, it seems like your best option is to set the camera to manual focus, adjust the focus setting to make the subject sharp and the aperture to give the narrowest depth of field you can manage. Once you've set it the first time, don't change it for subsequent photos. Instead, focus the camera by moving it toward or away from the subject. Practice will help. This isn't the best way to get razor-sharp photos, but you're presumably not going to hang these shots in a gallery -- they just need to be sufficiently sharp that you can analyze them later. Using live view mode while zoomed in to nail focus will help. Using a tripod with a small focusing rail (which is both cheap and easily portable) would be a huge improvement, and you can move the setup for each shot.

How do I know that a dimensional target is the same size in different shots?

Does it even matter that the target is exactly the same size in each shot? Why not place identical targets in the scene, take the shots you need, and later scale the images as necessary to make targets the same size? If you have a way to fix the camera position (i.e. a tripod or similar), you could take each shot twice, one with and one without the target. The first would help you figure out how much you need to scale the image, and then you'd apply the very same transformation to the second image.

Indeed, why not use a single registration target that extends across an entire set of images? Just lay a flat tape measure on the stump so that it'll be included in each frame but outside the area of interest. You can later use the image of the tape to easily scale and stitch the images as well as to provide a real-world measurement reference against which to measure tree rings, etc.

In short, don't rely on pixels for measuring. There are too many ways that pixel counting could lead to poor accuracy, and trying to maintain a constant pixel size limits your flexibility. Even within a single shot, the various forms of distortion introduced by a lens could cause the physical area represented by a pixel to differ in different parts of a photo. Use a reliable scale indicator placed in each photo next to the subject.

Not the answer you're looking for? Browse other questions tagged macro panorama or ask your own question.