How does the image form during a long exposure?

I was checking out the working principle behind a camera recently. I was amazed after learning how you can use slow shutter speed settings to take shots like this: 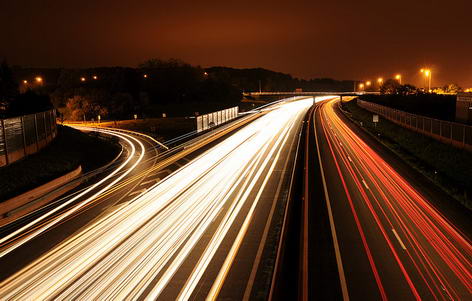 So, if I set the shutter speed to say, an hour, will the camera keep collecting light as long as the shutter stays opened? How does it create the final image?

For example: I don't see any traffic at all in the final image but the lights only. So, what factors decide that image?

So, If I set the shutter speed to say, an hour. Will the camera keep collecting light as long as the shutter stays opened?

Yes. But an hour is quite a bit longer than you'd typically want unless you take steps to drastically limit the amount of light entering the camera, like using a very dark neutral density filter.

How does it create the final image?

Same as for any other exposure: the sensor is a large array of photosites, where each photosite corresponds to a pixel in the final image, and each photosite accumulates a voltage as photons strike it. After the exposure, the voltage at each site is read, and that set of values is the image.

I don't see any traffic at all in the final image but the lights only. So, what factors decide that image?

You don't see cars because cars don't emit any light, aside from their headlights and tail lights (which you do see). Cars often do reflect light from other sources, but there aren't any light sources in the image that are close enough to be reflected by the cars.

Now think about it, the exposing light is accumulating all the time the shutter is open. This is true regardless of the exposure time. If we use a super-fast shutter we must counter the short time the exposing light is allowed to play on the image sensor. We do this by using a fast lens. This is a large aperture that is able to act like a funnel in that it gathers vast amounts of exposing light energy. If we use a super long exposure, likely we will over-expose. We resort to using a tiny lens aperture or limit the light that transverses the lens by means of a dark filter (neutral density) that acts like sunglass for the camera.

We can use the exposure time to do amazing imagery. If we set the camera to a super-fast shutter, the resulting picture will be super under-exposed. Suppose we make a series exposures using super-fast shutters speeds. What happens is, a shot of a busy city street will look like a ghost town. Only motionless objects like buildings and parked cars will image. Moving objects will not record. This is the way they show an empty city in a science fiction movie. The invers is to use a super long exposure. Objects that are moving will not record because the lens aperture is set supper small. However the headlights and taillights of the cars are bright and they do record.

It’s neat to work with extrema shutter setting. We can stop a bullet in flight with a fast exposure or we make time laps movies and watch flowers growing and blossoming. It’s lots of fun.

Modern cameras have a fixed shutter-speed range, typically 1/4000s-30s, but some go both faster and slower, up to 1/32000s until 250s, depending on the model. To get longer shutter-speeds, DSLRs and a number of mirrorless models offer a Bulb mode which lets the user control when the shutter is open and closed, thereby creating longer shutter-speeds. There is still usually a limit though, sometimes in minutes and sometimes in hours, mostly for DSLRs.

Light gets collected during the entire exposure which is why long exposures are taken at night usually. One can do so during the day by using an ND filter which reduces the amount of light that reaches the sensor.

The key as to what appears in the image is to understand exposure. Car lights are much brighter, so they register on the sensor quickly. Car bodies are comparatively darker which is why they look as if they were not there. None of them sent enough light to register on the sensor. Should you have had a slow moving vehicle, it might have registered partially and would appear ghostly.

When using a long shutter speed you have to adjust your way of thinking. When the shutter is opened everything gets recorded, but when something moves, whats behind it will leave its mark over the previous imprint.

This is why the traffic gets washed out, it moves too fast sso the imprint is too small and gets overwritten by the road. The headlights are so bright they make a huge imprint and because of this they kind of make it impossible to overwrite.

Not the answer you're looking for? Browse other questions tagged shutter-speed camera-settings long-exposure camera-basics or ask your own question.

6
How can I get a clear subject with motion-blurred (traffic trails) background?
3
How to maximise the impact of car headlight trails in long exposure

7
What does “long exposure” mean?
9
Why do two different cameras using the same settings produce photos with different exposure levels?
1
How to photograph panning with a point and shoot camera?
2
Are these strange splotches on buildings in a long-exposure photo hot pixels?
2
When shooting in A-mode, at times the shutter speed becomes too slow to hand hold and shoot. How do I solve this?
1
Why isn't live view on my D3200 matching the exposure I've set manually?
2
Canon f-1 shutter and mirror jammed when speed is below 60
3
What is the possible optimal range for shutter speed, aperture, and ISO settings in product photography setting on white background?
0
Decrease luminance of particular during long exposure