Why does the 55-250mm blur the background nicely and easily while the 18-55 does not? [duplicate]

I have a Canon 700D and I am new to photography (around 1 month). I got two kit lenses with my camera - the 18-55mm and 55-250mm. I usually use the 18-55mm lens as most of photography I have yet done has been indoors. I also heard somewhere that this lens is good for portraits and the other is a telephoto lens which is good for comparatively distant shots.

Yesterday I was clicking friends' pictures on our roof, but the background-blur effect was not quite clear. Just to check, I changed the lens to the 55-250mm and it was really good at creating blurred backgrounds with sharply focused objects (my friends). Should I use this lens for shooting portraits then?

I know some theoretic basics about Depth of Field and that aperture should be wider to create shallower DOF, but what I am not able to understand is that for same settings(Automatic modes - portrait mode), shouldn't the 18-55mm lens also create the same effect? It looks like that lens does not increase its aperture as nicely as the other lens does.

The 'blurred' background in case of the 55-250mm lens is due to the longer focal length, as compared to that with the 18-55mm. 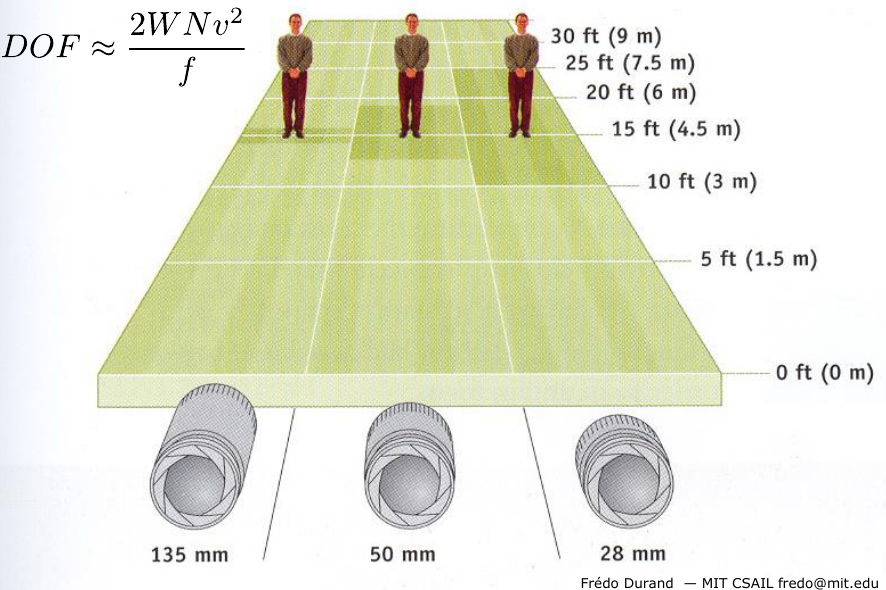 A closely-related correlation between the focal length and the field-of-view also plays a role here, as depicted in the fantastic example below:

The photo^ on the right is taken with a typical stock lens like the 18-55mm, taken from up close (as depicted by the camera near the man in the middle picture), and has a (relatively) sharp distant trees in the background. The photo on the left is taken with a lens with a large focal length (e.g. 55-200mm, telephoto). One can clearly* see the same tree and buildings in the picture, which are on the left of the man's right shoulder in the picture on the right.

And there you have it, the 'blurred' background (in a narrow field-of-view) with a lens having a larger focal length.

Caleb's answer nicely clears the misconception of 'same settings' between different lenses on a camera.

what I am not able to understand is that for same settings(Automatic modes - portrait mode), shouldn't the 18-55mm lens also create the same effect?

You can't set the camera to "portrait" mode and say that the settings are the same. If you want to compare the bokeh (background blur) of the two lenses, you should use manual (M) or aperture priority (Av) mode and set the aperture to the same setting for each lens, or to the maximum aperture (lowest f-number) each lens supports if you want to maximize bokeh for each. For the most meaningful comparison, consider setting both lenses to the 55mm focal length.

With portrait mode the camera is free to pick any aperture to get the exposure right, and it may choose differently for each lens. It's also possible that lighting conditions happened to be different when you used each of the two lenses, e.g. you might have just happened to have a brighter background when you used the 18-55mm lens, and that might have caused the camera to choose a smaller aperture.

Finally, the ratio camera-subject to subject-background distances makes a big difference. Try putting that 18-55mm lens on your camera, setting it to a large aperture (again, small f-number) and taking some shots where the camera is close to the subject but there's some distance between the subject and background. That should create some decent bokeh.

With longer focal length the lens is also seeing narrower section of the background, so it is usually easier to find smooth one, if you so desire.

When you take portraits with longer focal lengths, the photographed person will be relatively far away from the camera, which usually makes the facial features appear more flattering.

So if you use your telephoto lens for portraits, you will be able to get better subject /background isolation and portraited people will be happier about how they look. But with the narrow view of that lens you won't be able to include much background in pictures where background is important (e.g portrait of a writer in his office) and the pictures will feel distant.

Use both lenses depending on what you do. For a classical/formal portrait, the telephoto lens is probably a better choice.

Not the answer you're looking for? Browse other questions tagged lens portrait focal-length depth-of-field or ask your own question.

44
How can I get dramatic shallow DOF with a kit lens?
68
What exactly determines depth of field?
0
Nikon d3300 better lens