I take photos as a hobby and the last 2 years have photographed our annual dance concerts however i would love to improve the quality of my photos. I own a canon EOS 500d and would like some advice on the best lens' and settings to use. Being a small town the lighting at our town hall is average.

Photography in a theatrical setting is one of the most challenging forms there is, both in terms of pushing the equipment you use to the absolute edge of their capabilities and in terms of requiring every bit of skill and experience you might have as the photographer.

Photography is the art of capturing light. Most theatrical settings don't offer much light to capture and what light there is to capture is changing rapidly and the subjects are usually very animated.

The traditional solution to not much light (longer shutter speed using a tripod to hold the camera still) doesn't work because nobody on stage stands still for 10-15 seconds while you take a picture.

The traditional solution to capturing motion (faster shutter speeds) doesn't usually work because there isn't enough light to capture a good image on a small sensor with a narrow aperture.

In the end you have to balance the two as best you can AND use gear that allows you to capture as much of the scarce light that is present in the scene in as fast a time as possible. That means fast lenses (wide apertures), larger sensors, and cameras that are highly responsive (fast handling and AF). It also means you must use impeccable timing when you release the shutter. If a performer is jumping you can get by with a slower shutter time if you catch the performer in the instant they stop going up and start going back down. If they're running back and forth across the stage, catch them in the instant when they transition from moving right to moving left or vice versa.

I've shot theatrical performances with both APS-C and full frame cameras. With even the best APS-C sensors I wouldn't try to shoot using any lens narrower than f/2.8. With a FF sensor I sometimes will use an f/4 zoom for the wider angle stuff where motion blur from slightly slower shutter times is not as much of an issue. For tighter shots using longer focal lengths I use an f/2.8 zoom or even a wider aperture prime such as a 100mm f/2 or 135mm f/2 to allow fast enough shutter times in such a setting. I often use a monopod with the 70-200 lens just to help with camera stability. (Most of the time shooting high school and community theater I have free run of the theater. I tend to wear all dark clothing and be as invisible and non-invasive as possible. It helps if the theater has outside aisles. Moving about is not always an option, though, especially in commercial/professional settings. Fortunately the lighting is also usually better and a lot of the time with such productions you're only allowed to shoot the dress rehearsal anyway, where you do have more freedom of movement.)

If at all possible it helps to be familiar with the production before you shoot it. Attend a few of the last rehearsals when the lighting crew is also participating if such rehearsals occur with the dance program. Even if there are no rehearsals with the same lighting as the show, catch a few of the dancers' rehearsals to learn their routines. The best shots you'll get will always be the ones you anticipate and set up for in advance of when the action actually happens.

Shot from the orchestra pit during a dance number. EOS 5D Mark II, EF 24-105mm f/4 IS @ 24mm, ISO 1600, f/4, 1/160 second. Shot using Evaluative metering in Av exposure mode with -1 1/3 stop exposure compensation. I timed the shutter when the nearest briefcases were at the apex of their trajectory. 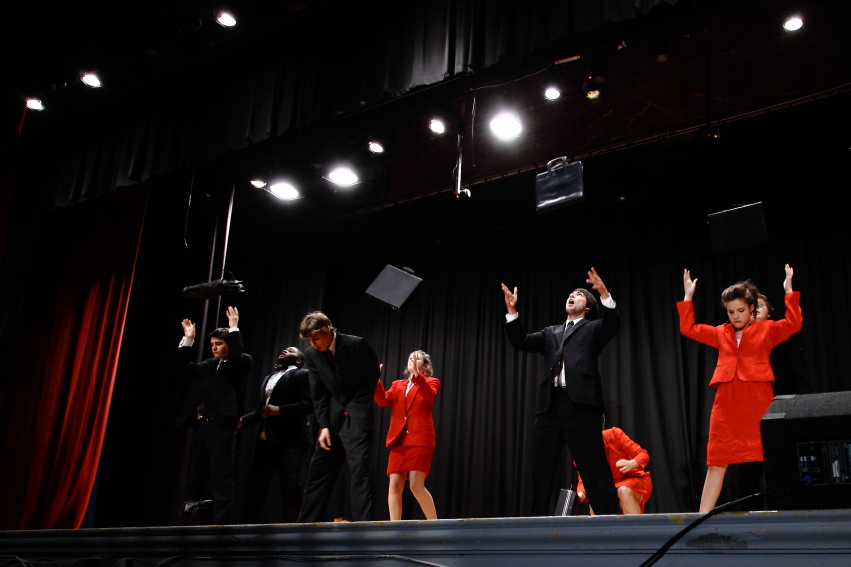 Manual exposure mode with Evaluative metering showing about -1. EOS 5D Mark II, EF 70-200mm f/2.8 L IS II @ 75mm, ISO 1000, f/3.5 (to get enough DoF for the multiple rows of performers), 1/125 second. Timing the up/down movement of the dancers is critical when using such a slow shutter speed. Notice how much blurrier the dancer at the far right is who is out of sync. 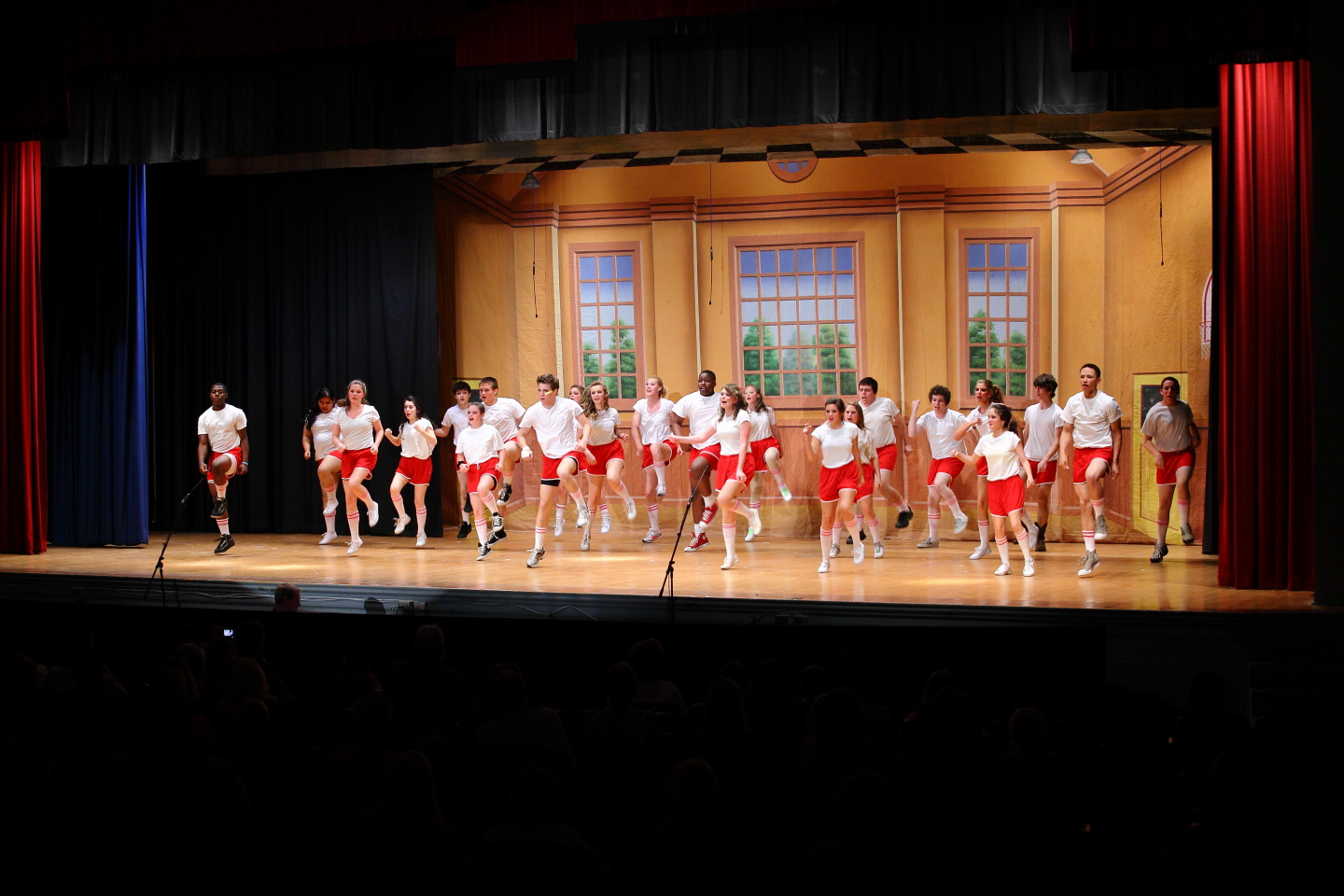 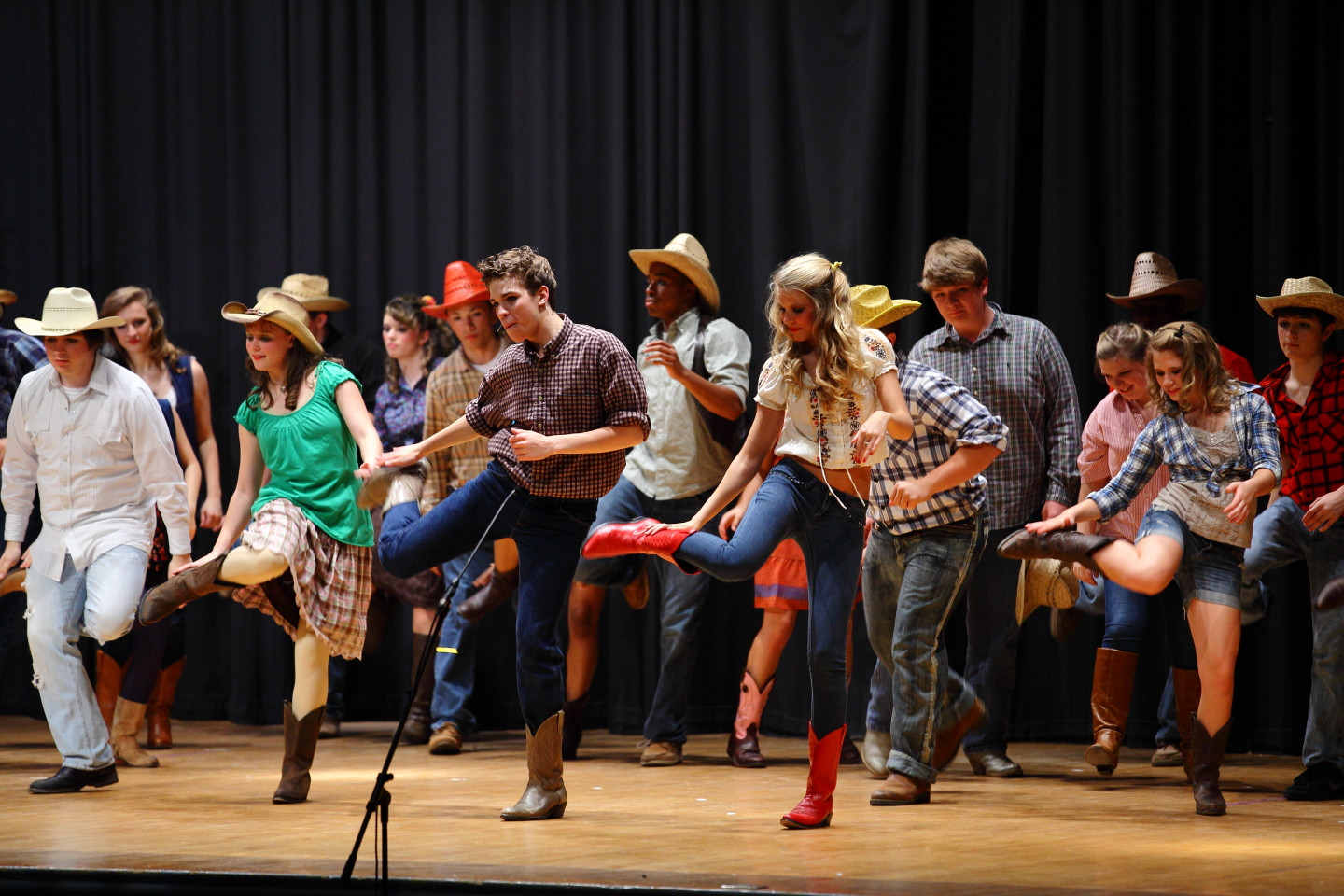 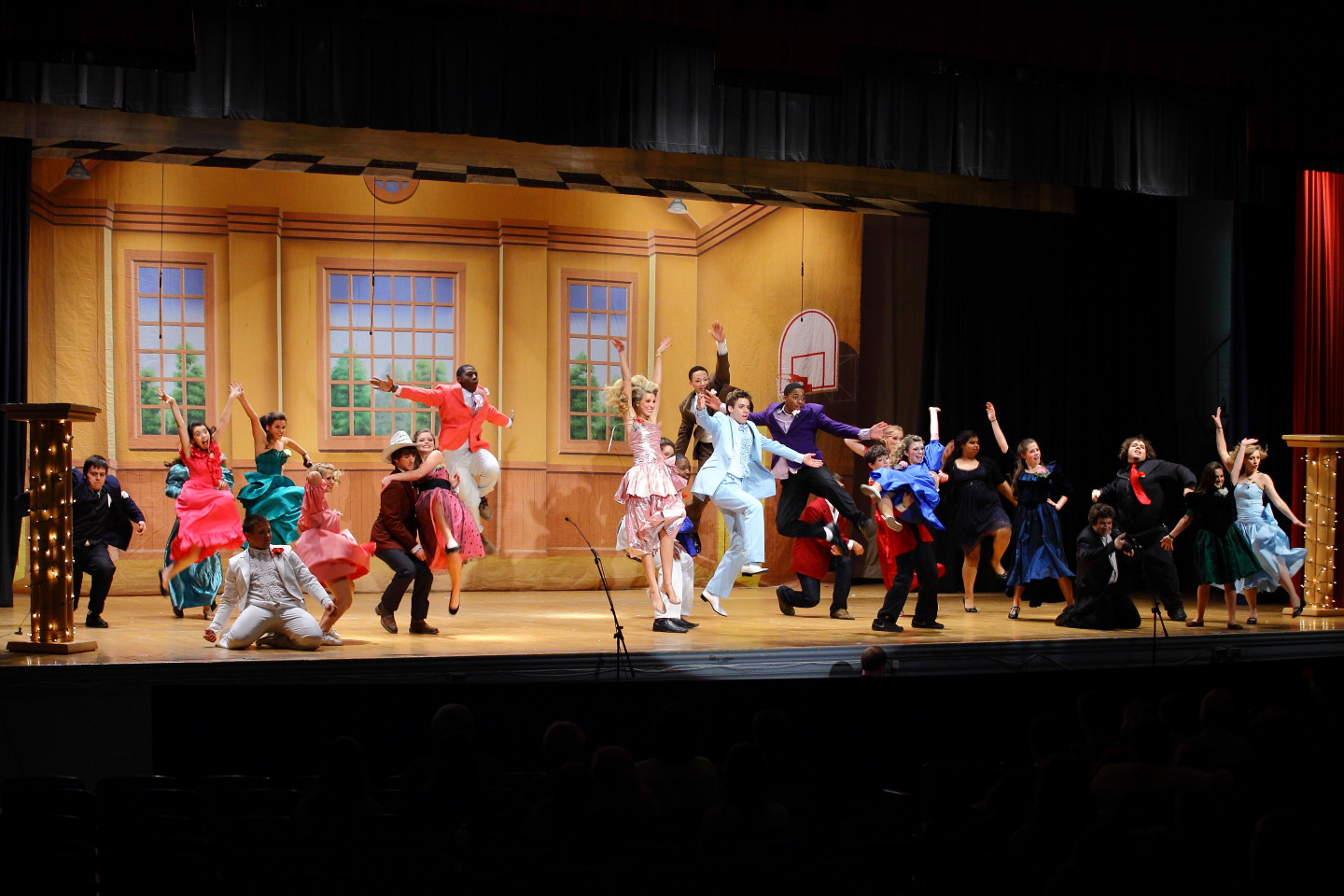 Notice that even though the three previous shots of the same production were done using manual exposure the ISO, AV, and Tv combination are different for each shot. Learning your camera's controls enough to adjust ISO, Tv, and Av by touch without moving your eye from the viewfinder is critical to successful theatrical shooting. So is paying careful attention to the light meter and knowing which metering mode you are in and how each metering mode will affect the readings you are seeing.

For tighter shots the needed Tv to freeze motion gets shorter. Sometimes you must concede that you won't be able to freeze every part of a performer's body with the options available to you (light, lens, camera's high ISO performance limits). In such a case the key thing to remember is to place the face at highest priority. Even if you have to pan a little to track the face during the exposure and blur the entire rest of the scene, it will look better than the rest of the scene sharp but the lead performer's face blurry.
EOS 5D Mark II, EF 70-200mm f/2.8 L IS II @ 200mm, ISO 1600, f/3.2, 1/200 second. (I could have gotten a slightly better result at f/2.8 and 1/250 if I'd been totally on my game!) 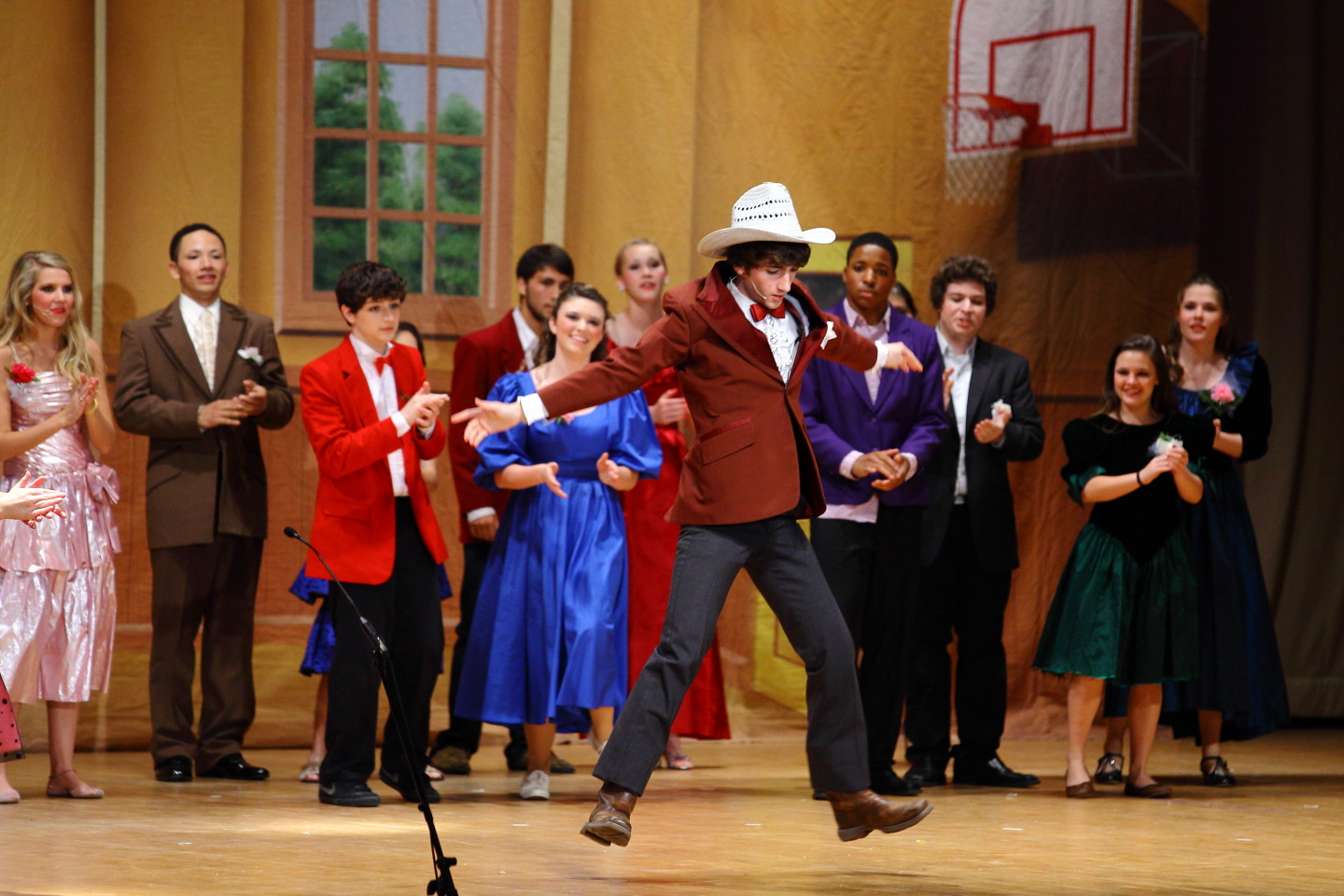 Shooting raw images so you will have latitude in adjusting color as well as exposure in post-processing is paramount. Having all the raw data from each image available opens so many more possibilities with regard to color, exposure, contrast, etc. than the much more limited information in a jpeg file (please see this answer to the last question linked below for a fuller explanation).

There's another question here that deals with shooting a music concert from a near stage location. I'm having trouble getting sharp pictures while shooting a concert from a press pass location Much of what is said there is applicable in your situation as well.

There are also a few other questions and answers that you might find helpful:
Regarding lenses:
What are appropriate lenses for concert photography?
What kind of filter (if any) should I use when photographing a theater scene? (hint: Lose the filter on the front of your lens!)
Canon 70-200 f2.8 non IS or f4 IS
Regarding metering/exposure issues
What went wrong with this concert photo and what could I have done to make it better?
Blown out blue/red light making photos look out of focus (particularly this answer)

Not the answer you're looking for? Browse other questions tagged lens camera-settings or ask your own question.

3
Pictures of dancers on stage
10
Blown out blue/red light making photos look out of focus
10
I'm having trouble getting sharp pictures while shooting a concert from a press pass location
8
What went wrong with this concert photo and what could I have done to make it better?
4
What are appropriate lenses for concert photography?
4
How to cancel purple stage lighting on subjects?
0
What kind of filter (if any) should I use when photographing a theater scene?
0
Canon 70-200 f2.8 non IS or f4 IS

17
Which prime lens for Pentax APS-C?
1
What exposure settings are best for shooting gym competitions at night?
4
How can I set the Canon EOS 500D interval timer to take 10 photos with a 10 second interval?
2
Lens Advice for Product Photography
3
Will I see enough improvement moving from EF-S to "L" lenses to warrant the cost?
1
Which camera (and lens) mode or settings for moving subjects?