This article argues that,

50mm prime lenses, on the other hand, have a maximum aperture of somewhere between f1.2 and f2, letting you hand hold photos in much lower light levels (they also give you a much brighter viewfinder, making it easier to see the subject in low light)

For example, this landscape was taken with a 50mm prime lens by the light of the setting sun. The light was very low and I wouldn't have been able to hand-hold the camera if the maximum aperture was limited to f4 or f5.6. 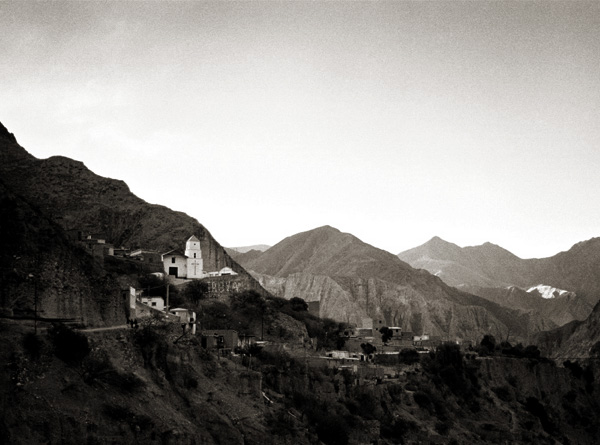 Generally, while shooting landscapes, it is expected to have everything in sharp focus. It means that we need to use to use a higher f-stop to increase DoF and reduce blurring thereby. However, the author advocates using 50mm at a lower f-stop just to let more light falling on to the sensor in low-light. The image above doesn't exhibit any lack of sharpness apparently. But, I wonder if it is really the case or because of the scaled down version of the original image. Will the lack of sharpness become evident for a full-size, high resolution image?

Will the lack of sharpness become evident for a full-size, high resolution image?

Just because the focal length, aperture used, and the shooting distance may allow for most everything to be within the limits of acceptable focus doesn't guarantee a sharp image will be the result. In such a case as described in the question the largest contributing factor to blur is likely not the size of the circle of confusion or the resulting depth of field or even failing to use the lens' "sweet spot" at all. Rather it is probably the amount of camera movement allowed by the photographer holding the camera by hand.

So in the case of the article cited in the question the author is balancing the need for a short enough shutter speed to prevent unacceptable camera motion blur with the need for an aperture that allows for acceptable sharpness.

Look at it this way: You can have a 50mm f/1.4 lens that is theoretically perfect at f/8 and a film that is a theoretically perfect recording medium at ISO 25 but if you're handholding the camera and only have enough light to use a shutter time of 1/4 second with that combination you're not likely to wind up with an image that is acceptably sharp by anyone's definition. If you use f/2 and 1/60 second you'll almost certainly wind up with a much sharper image that might be acceptably sharp to you.

Since more detailed information is not given, we'll have to guess at a few things. Let's assume the photo above was captured on 35mm film by a 50mm f/1.4 lens. If the photographer used f/2 that means the lens was stopped down a full stop from wide open, yet it still allowed a shutter time 1/4 as long as an f/4 lens used wide open would have required and a shutter time 1/16 as long as an aperture setting of f/8 would have required for the same film speed and lighting conditions.

At 50mm and f/2 using 35mm film to produce an 8x10 print viewed at 10 inches by a person with 20/20 vision (which gives us the CoC of 0.03mm) the hyperfocal distance is 136 feet. That means everything from 68 feet to infinity would be acceptably sharp. If the nearest point in the vista is further than 68 feet, then you would focus at slightly less than twice the distance to the nearest object appearing in the frame to maximize the depth of field of the entire vista. 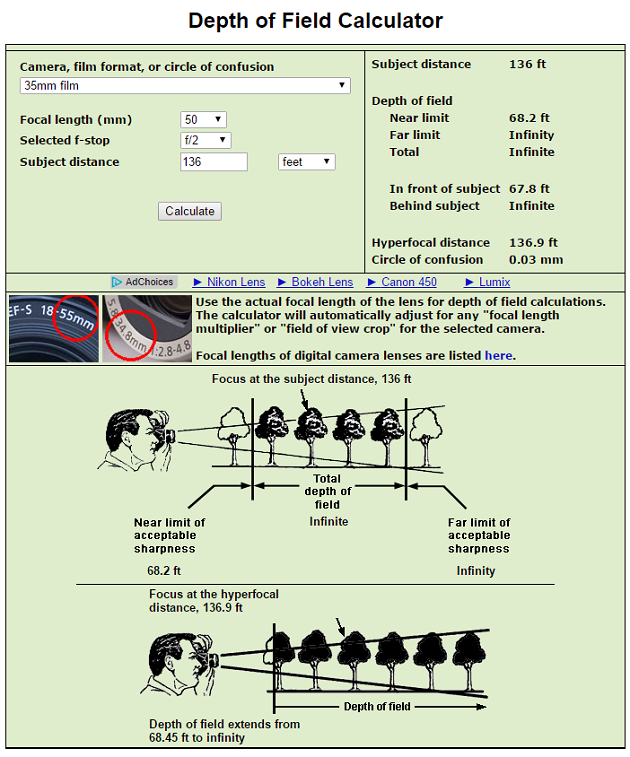 As to the viewfinder brightness: The appeal of the SLR (single lens reflex) is due in no small part to its viewfinder system. The modern SLR maintains the lens aperture wide-open for viewing and composing. Thus the photographer is presented with a view that is at maximum brightness. Additionally, with the aperture open wide, depth-of-field (DOF) is at minimum. A shallow DOF is desirable for focusing as focusing is more critical. During the actual picture taking, the mechanism closes down the aperture to a pre-set f/number. This action expands the zone of DOF. Naturally, the larger the maximum aperture, the brighter the viewfinder view.

Let me add that landscape images likely only portray objects at an infinite distance. We set the focus at infinity ∞. Unless these vistas contain foreground objects, DOF is moot.

All that being said, there is truth and there is lore when it comes to lens sharpness. The old masters of landscape called themselves “Group 64”. They set their aperture to f/64 to gain maximum DOF and maximum acuity. The DOF part is correct, the acuity part is iffy.

A a rule-of-thumb: The camera lens is at maximum sharpness when stopped down about two f/stops. This is because at max aperture the outer perimeter of the lens is being used, this region has the most severe curve (figure), imaging forming rays from this region often go astray reducing acuity.

Thus as we stop down, acuity increases. Not so fast! As we stop down, twin demons of diffraction and interference begin to degrade the image. Due to the nature of light, some of rays hit the blades of the iris with a glancing blow. These ricochet and bleed into the path of the image forming rays. As we stop down the percentage of these glancing blows increase. The net result, the resolving power of the lens decreases as we stop down. We measure lens acuity in lines per millimeter. We are talking about the ability to distinguish spaces between closely ruled lines.

The Rayleigh Criterion conveys the theoretical resolving power of a lens as RP=1392 ÷ f/number. This value is usually given for green light; other colors will have a slightly different value.

Note: f/8 value and above is higher than is pictorially useful for film.

How does this affect the final image? Generally we view small images and likely the RP is of little importance. However, when we make and view large images for display, this stuff becomes important. Especially true if the viewer is positioned near the enlarged displayed image.

However, the author advocates using 50mm at a lower f-stop just to let more light falling on to the sensor in low-light.

And no, landscape does not have to be sharp everywhere.

The image above doesn't exhibit any lack of sharpness apparently. But, I wonder if it is really the case or because of the scaled down version of the original image. Will the lack of sharpness become evident for a full-size, high resolution image?

Even if you insist on Group f/64 style sharpness in the whole image area, I would not be worried about DOF too much with near infinity image with no foreground. There are other factors, though. Most fast 50 mm lenses suffer from spherical aberration, field curvature and other aberrations that reduce resolution wide open. If you want to achieve the best possible resolution, it is important to know your lens and find the right balance with the aperture/ISO/exposure setting.

One more thing - I don't know how old this article is, but some of these images look like shot on film and compared to film, modern cameras can achieve shorter exposures thanks to better high ISO image quality and presence of image stabilizer. These things together can give you possibly 5 stops advantage compared to film and no image stabilization. So there are other lightweight options for landscape photography than 50mm/1.4 lens today. Shooting with 50mm is still fun, though.

However, the author advocates using 50mm at a lower f-stop just to let more light falling on to the sensor in low-light.

That's a pretty big just. A lens that gathers more light does, in fact, let you shoot at a higher shutter speed, which means that you can hand-hold the camera in lower light than you could with a slower lens. This is a fair point. On the other hand, many kit lenses have image stabilization that makes it possible to hand-hold the camera at a slower shutter speed than you could with a non-stabilized lens.

The image above doesn't exhibit any lack of sharpness apparently. But, I wonder if it is really the case or because of the scaled down version of the original image. Will the lack of sharpness become evident for a full-size, high resolution image?

Even the example image doesn't seem tremendously sharp; it may be that some sharpness was lost in scaling down or compressing the image. In general, though, the thing to know is that depth of field increases as the distance to the subject increases. When the distance to the subject is great, the depth of field will be very large even at large apertures. Is it possible that objects in the distance will be noticeably less sharp? Of course. But depending on the circumstances, it's also possible that the decrease in sharpness won't be detectable.

Overall, I think you may be reading too much into a single point in a larger article about the advantages of 50mm prime lenses. Yes, you can shoot a landscape at large aperture, and that may give you more flexibility than you'd have with a slower lens. Other advantages include low price, image quality, narrow DoF, and low weight.

Every lens has a "sweet spot" for sharpness. It's usually in the middle of the range of f-stops (f8 to f11, generally). As you move further away from that sweet spot, detail becomes more blurred, as shown in the image below. Whether this reduction in sharpness is perceivable depends mostly on viewing distance relative to image size. You will absolutely see the difference at close range. At longer range, the lack of sharpness becomes less noticeable.

Here's an article that describes the phenomenon, and how to find your lenses' sweet spots. 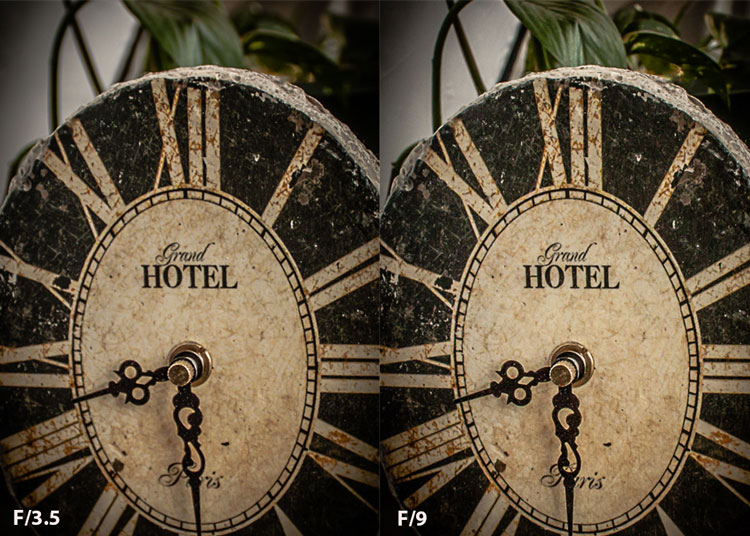 Not the answer you're looking for? Browse other questions tagged aperture depth-of-field landscape sharpness or ask your own question.

15
Would a prime be redundant with a fast zoom?
2
Does long exposure mean more details in landscape photos? If not, then how to take sharp landscape photos?
7
Unable to get sharp landscape picture
4
Why my DSLR is not as sharp as my smart phone?
2
How do I get the best sharpness from a Zeiss Jena Pancolar MC lens?
4
Is using a low F-number (wide aperture) for landscape photography a good practice?
2
For the same FOV and f-stop, will total luminous flux increase linearly with sensor area?