What caused some of the bright, diffuse areas of sky in some of the Apollo images from the moon?

There is a large, diffuse, bright area in the otherwise black sky in some of the Apollo mission images from the moon's surface. It is not the sun. What can it be?

In the images below, I am comparing the original image with one I modified by bumping up the contrast and brightness to accentuate the bright areas.

Apollo 14, Feb. 1971. Astronaut Edgar D. Mitchell. What is the big bright area on the right side? 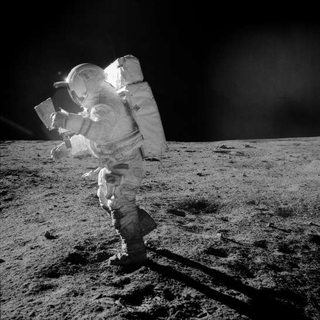 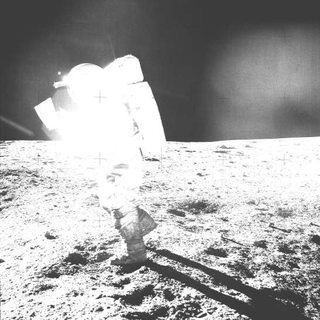 Another similar picture, this time from Apollo 11, July 20, 1969, Buzz Aldrin descending the ladder of the Lunar Module (LM). What is the bright area in the upper left, in the sky? 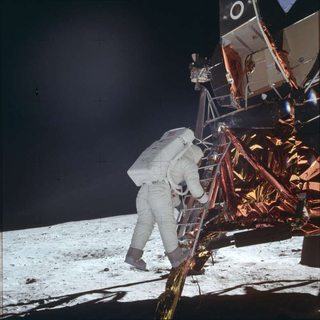 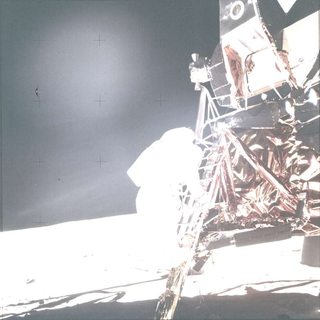 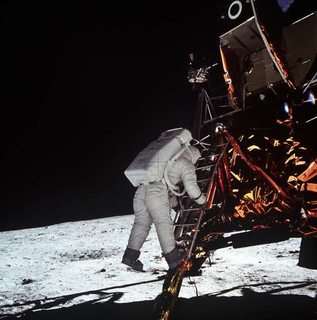 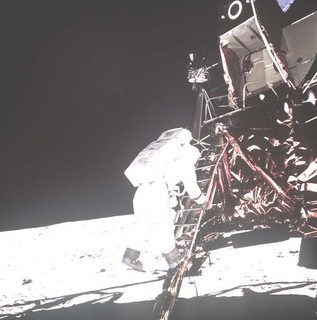 It looks like lens flare. It is an internal reflection inside the lens. It is caused by off axis light allowed to fall on the front surface if the lens from outside the field of view.

For an example of such flare when the exposure is brightened please see: Can you photograph the milky way with a full moon out?

It might also be sunlight reflecting off dust that has been kicked up by the astronaut. In the moon's gravity field that is only 1/6 as strong as that of the Earth's the same amount of force would cause the dust to go 6x higher before falling back to the surface and it would also take 6x as long for such dust to settle as it would in a vacuum under Earth's gravity. There is also no atmosphere and thus no wind to disperse the dust.

It might be possible that dust could be electrostatically stuck to the front of the lens in some of the photos taken on the surface of the moon. In the case of the Apollo 11 photo of Buzz Aldrin descending the ladder of the LEM the absence of such a smudge in photos taken subsequently argues strongly against that theory. The Apollo 11 mission only included a single EVA, so all photos of Aldrin on the Moon's surface were necessarily taken after the photo of him coming down the ladder of the LEM.

This image was 34 frames later from the same film magazine on the same camera as the shot of Buzz descending the ladder: 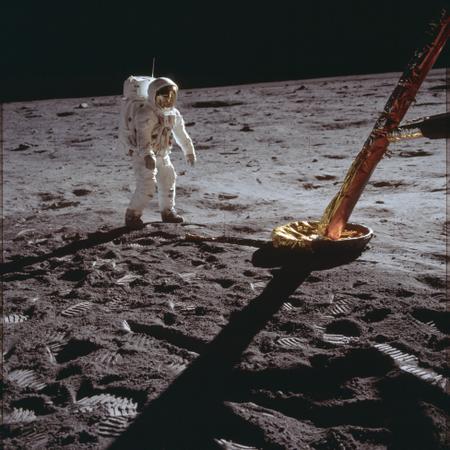 Notice that there is no evidence of dust on the lens. If one examines all of the images from that magazine it quickly becomes apparent that the angle of the sun to the camera and whether the camera is in the shade of the LEM or not are the most determining factors regarding which images demonstrate the effect and which ones don't.

Likewise, if one examines all of the images in sequence from film magazine LL on the Apollo 14 mission it becomes abundantly clear that lens flare is the main culprit.

Thank's to Makyen quote I am posting this option.

It could be some fine dust in the front of the lens.

Fine dust can stick to a surface by electrostatic charges.

Moondust was a real nuisance for Apollo astronauts," adds Abbas. "It stuck to everything – spacesuits, equipment, instruments." The sharp-edged grains scratched faceplates, clogged joints, blackened surfaces and made dials all but unreadable. "The troublesome clinginess had a lot to do with moondust's electrostatic charge."

Now that I think more of it, the pattern does not resemble lens flare, because it is more irregular.

There are thousands of pictures from the Apollo missions; it stands to reason that many of them exhibit the same sort of defects common to terrestrial photography. In this case, the problem is lens flare, which we can prove to a reasonable degree by comparing the sample images to similar ones where the artifact is more clear. 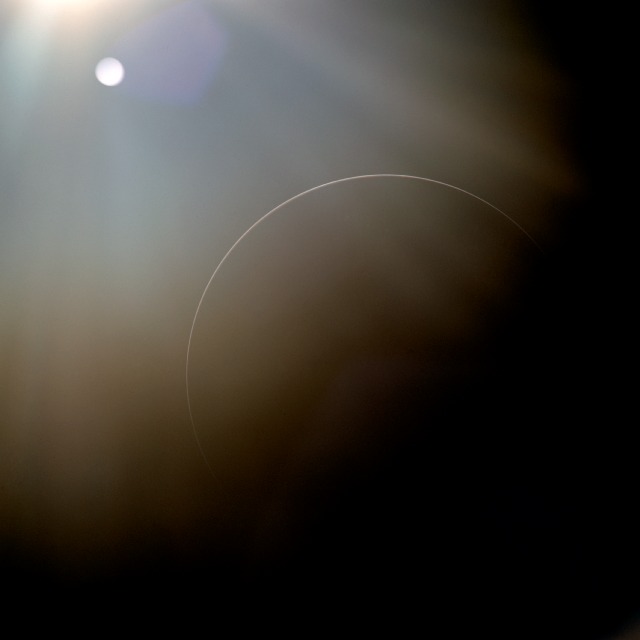 The brightness in the lower left corner of the photograph is a lens flare caused by sunlight reflecting on the window and the lens of the handheld Hasselblad camera.

See the light purplish pentagon to the right of the moon? That's the shape of the aperture of the lens. 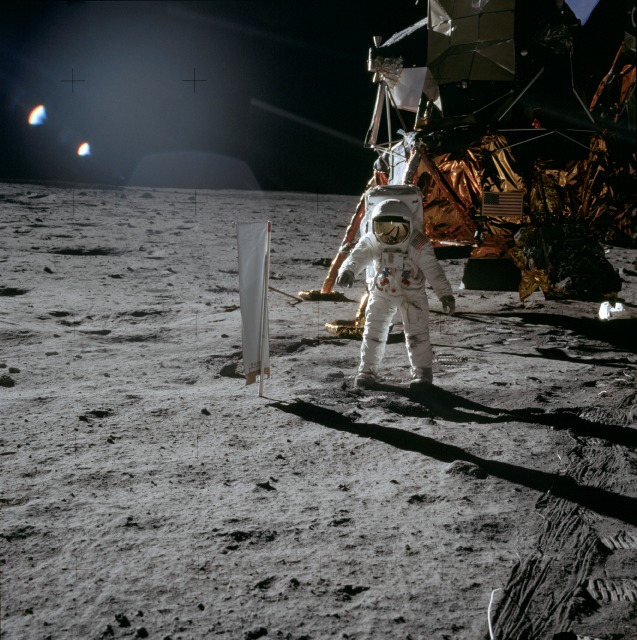 we again see very obvious lens flare including the pentagonal shape of the aperture. That shape isn't visible in your first example, but that's because it's right on top of the astronaut and thereby obscured. If we look at the next frame in the sequence*, it's more clear, as Mitchell has moved forward: 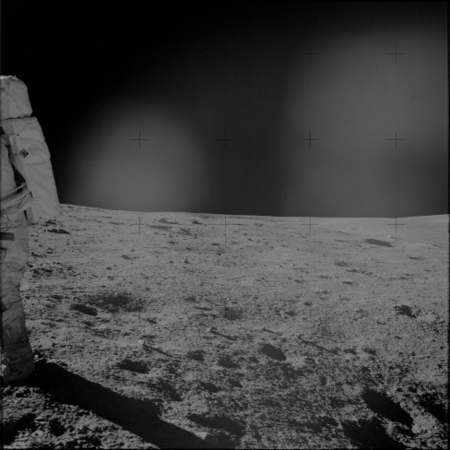 although it's not exactly perfect geometry, it's definitely apparent as lens flare — and if we look at the same shape with slightly different alignment just a few frames earlier, we see it even more clearly: 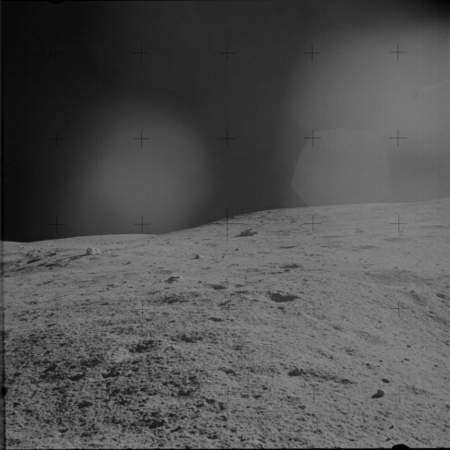 Here, the camera is turned so the flare nicely shows a ghost image of the pentagonal aperture, and one can pretty easily see that it's the same general structure as the flare in your first example.

So, overall, there's clear evidence that this is simply lens flare.

To avoid this, the astronauts could have waited until the lunar sky was more overcast, so the sunlight was less harsh. But I guess they were in a hurry. And a lens hood probably would have helped, but it was probably too much of a bother to run back for one.

* Thanks Michael Clark for the link to the gallery.

Not the answer you're looking for? Browse other questions tagged astrophotography artifacts moon extraterrestrial-cameras or ask your own question.

7
Is astrophotography basically pointless with a moon in the sky?
3
How to reduce Jupiter brightness in the photo?
5
What is the blue circle in this moon image?
0
What caused these red blotches on the black suit?
2
What caused my astrophotography images to come out hazy?
0
Is this color-correction explanation of images from a lunar lander gobbledegook?
2
What are some causes for an oblate image of the Moon during total solar eclipse?
11
How do I take a photo so the moon doesn't have bright “rays”?
9
Why is the earth not overexposed in this star photo from the ISS?
0
Take stacked photos of night-sky with the Moon