Why are my RAW images already in colour if debayering is not done yet?

I recently went on a trip and took a bunch of pics with my girlfriends Canon Rebel.

We shot in RAW, and now I am going to process the RAW images in DarkTable (my first time ever).

I have read that the first thing to do when processing RAW images, is the debayering of them.

I have googled it and read a skimmed a few articles, and I am still a little confused.

So if debayering is required to make a greyscale image a trichromatic image....why are my RAW images already colour?? Does that mean that the camera already did the debayering of the image?

This is actually really simple: your image is shown in color by Darktable because it renders the preview from the RAW file in order to show it to you — including demosaicing. (Or, depending on settings, it may initially show you a low-quality JPEG preview actually embedded in the RAW file by the camera.)

This is why I find the whole "RAW isn't an image; it's a collection of data!" somewhat over-pedantic. This is true of JPEG files too: "they're not images, they're collections of discrete cosine transforms!" — which is obviously also silly. The difference is that there is no fixed "correct" interpretation of the RAW data: there are many possible ones. Darktable (and any other software) shows a default interpretation when you load the file.

So if debayering is required to make a grayscale image a trichromatic image....why are my RAW images already colour?? Does that mean that the camera already did the debayering of the image?

Since you have a Canon camera I would encourage you to also try Canon's Digital Photo Professional for editing and converting raw files. It is included on the software disc that comes with every Canon EOS camera and updates are free from Canon at the support page for your particular camera model. Here's a link to the EOS 700D/Rebel T5i support page. Just click on Software to see a list of the most current versions of the applications available for the particular camera model. You can search for other models from here.

Canon's DPP actually reads all of the EXIF data including the "maker notes" section and by default uses the in-camera settings as the initial profile when rendering .cr2 files (something most raw converters do not do). The initial rendering of the raw data will be very close to the appearance of the jpeg preview generated in camera using the same settings. They will probably be so close that they will be indistinguishable to your eyes. 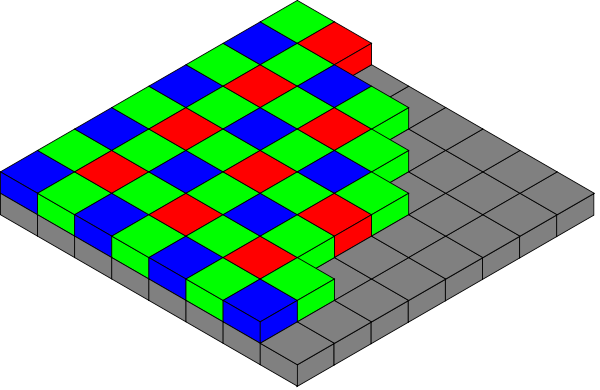 Each block is a pixel. Not all pixels contain information about each of the RGB channels. Debayering is the process of interpolating the red and green channels of each blue pixel, the blue and red of each green, and the blue and green of each red.

You see raw images as color on the back of the camera screen, in thumbnails and in editing software as a convenience. People don't generally want to look at checkered black and white pictures.

In order to get a raw image into a workable format the following steps must be performed:

There are additional step for scientific processing, but they are outside the scope of this answer.

11
Why can software correct white balance more accurately for RAW files than it can with JPEGs?
4
Is the Preview file always the photo taken by the camera?
2
Why and how capturing RAW image instead of JPEG helps with editing
3
Is tone mapping automatically applied to RAW images?
2
Opening NEF files on windows initially open fine but then change contrast
1
Why does the quality of photos shot in RAW change after a few seconds when viewing them on a computer?
1
How can a camera pick up and process colors?
1
Why does a CR3 black and white image is displayed with colors when opening it on the PC?
1
Shooting in RAW Format
0
Sharing Lightroom images in DNG with ability to undo/redo edits in another application?
See more linked questions

4
RAW HDR with Photomatix dramatically different images in preview vs final
0
Non-Canon software not reading custom image settings off RAW images
3
What's the best way to shoot Black and White images on a 600D / Rebel T3i
4
shift-deleted images recovered but not fully restored
3
Why do my RAW (.nef) files have a reddish hue in Picasa 3?
1
.NEF Raw files open in Black and White
5
Dealing with RAW + jpg collections in Darktable: I only want to export processed RAW
1
Strange behaviour in darktable - image inconsistent
1
RAW to JPG conversion with reasonable automation