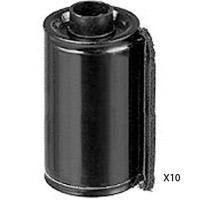 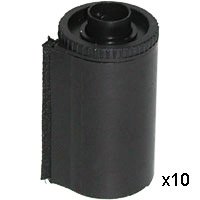 My intuition would suggest that the metal canister provides better protection against background radiation (especially if scanning or flying) and very bright light, but that it could get bent around the seal where the film comes out forming a small aperture for light to leak in which the plastic lacks.

Over the years, I have not had cassette failures. However, since the plastic cassettes are designed specifically for this task, I favor this design. Long - long ago, film came in a metal cassette that was reusable. I haven't seen this design in a long time. We would rap the cassette on a table, slamming the long projecting stem and the bottom cap would pop off. We would reload these countless times. Again, I favor the plastic cassettes.

What Alan said. The plastic cassettes Just Work(tm). If the tops are screwed properly, they're not going anywhere, and they are easy to open up in the dark when it's time to develop.

The metal ones will either have the tops popping off unexpectedly, or be a pain to do in the dark as you fumble for a bottle opener, then potentially wrecking the cassette for future use.

If it's a reusable cassette and it's not defective, it will not leak light, no matter what it's made of.

Metal cassettes, however, can be dented (as have been already said in comments) and this could increase the chance of light coming if the dent is on the cap/rim. They also have snap-on caps and if you accidentally drop such cassette on the floor, the cap can pop open entirely. If the inside spool also slides/falls out in such event, you have a very high chance to ruin the whole roll of film. I had this happen to me once, so I swapped all my metal cassettes to plastic ones (they have screw-on caps) since then. Although, metal cassettes are much nicer aesthetically.

The amount of background radiation metal vs plastic canister absorbs is negligible compared to the amount the x-ray scanner itself produces. Nevertheless, you should never check your film with the baggage when flying as baggage scanners are much more powerful than those for hand/cabin luggage. The baggage can also be scanned multiple times without you even knowing that.

Not the answer you're looking for? Browse other questions tagged film 35mm light-leaks bulk-load or ask your own question.

13
What is the point of film canisters?
3
How do I avoid torn sprocket holes with bulk loaded film?
3
Is this streak across multiple photos from a (35mm) Zenit 12SD caused by a light leak?
8
What's the cause of this Leica M6 light leak?
1
Possible cause of light leak in film SLR
2
How to roll a larger bulk film roll onto a smaller one?
1
What might have caused this Leica M6 light leak?
1
I accidentially exposed a bulk film roll from a bulk film loader. Are there chances of recovering parts of that bulk film?
4
What is causing the light leak in my Hasselblad A12 back?