What are standard lighting setups for 2-3 people?

What are some standard lighting setups for two or three people in a group? I just can't think of non-complicated setups that would apply some previously discussed (short, broad, butterfly, split, etc) lighting setups to groups of people.

Generally speaking, there are two schools of thought on lighting setups for groups. I'll cover what you're not talking about (for completeness) before I talk about your question directly...

This school of thought essentially says that even in a group portrait, every subject is treated as an individual, and is lit individually. The pros of this method are probably obvious- fine-grained control over every single subject in the shot, and (if you do it right) amazing 'magazine-ready' shots. The cons, of course, are that it is expensive (because you need lots of lights, accessories, assistants, etc.), and time consuming (because you have lots of variables). These are the types of shoots that take 8 hours to set up, and 10 minutes to complete.

If done right, however, the results are unachievable by any other method. For the most part because of the cost and manpower involved in setting up shoots this way, it is exclusively the realm of advertising photography and magazine editorial shoots. I know several people who have 'begged, borrowed, and rented' their way into self-funding shoots like this for their portfolios, and the shots the captured instantly became the centerpieces of their work, because these types of shots look stunning, and there's really no way to 'fake' it.

For the rest of us 'mere mortals' lighting groups (large or small) is often an exercise in compromise. The basic goal needs to be to evenly light each face in the group. Most of the time when lighting groups the 'artistry' of lighting setups takes a backseat to simply getting everyone lit with an 'acceptable' level of lighting. The easiest group lighting setups aren't much more than variations on the basic short-lighting setup, but widened out to fit the group. With a smaller group, this can often be accomplished with a single light source (whether natural, or artificial) and a reflector on the opposite side... Maybe with a light to separate the background and/or a hair light if you have enough light sources to accomplish it: 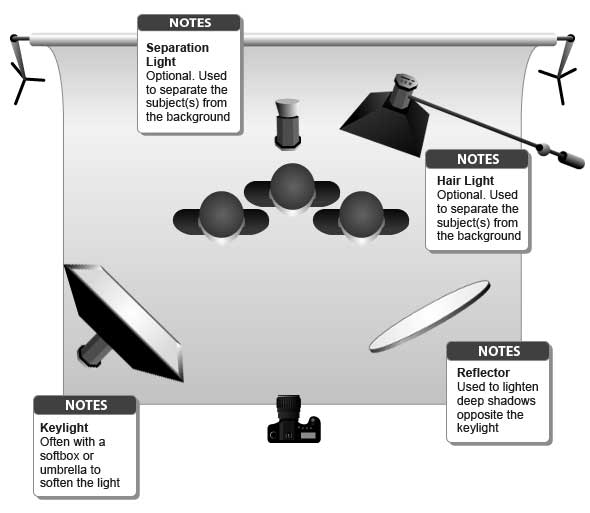 Things like hair lights, rim lights, separations lights, kickers, etc. can be added over and above the key light and reflector, but those lights would comprise what I think of as a 'basic plus' lighting setup. For a group of 2 or 3, the bare minimum you'll need boils down to just a key light and a reflector. I know working professional portrait photographers who use this 1-light setup almost exclusively- it's a powerful setup, and can easily be the base setup for the majority of group (and even individual) portraits you are likely to encounter.

For larger groups, this will almost always require a second lighting source opposite the key light to act as a fill and prevent shadows because more power will be needed than a reflector can provide. (Note that extras like hair light and separation light have been omitted for clarity. They can certainly be added if you have the lights.) 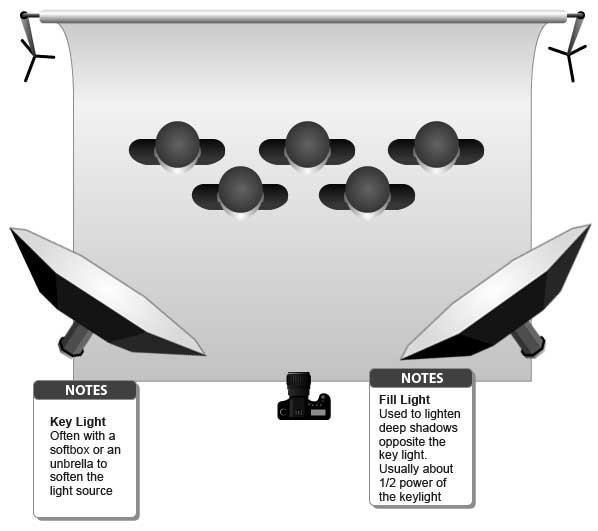 The other thing of real importance when lighting groups is arranging everyone so that no person is casting a shadow onto another member of the group. This is sometimes easier said that done! Generally speaking, the more that you can bring everyone's faces onto a single plane (by, for example, having those in the back row lean forward), the easier this will be. With group portraits I generally find that it's best to slow down and spend the 5 or 10 minutes getting the arrangement right before beginning to take pictures, but 'arranging groups' is probably an entire topic in itself. :-)

Not the answer you're looking for? Browse other questions tagged lighting portrait studio-lighting lighting-basics or ask your own question.

113
In portrait photography, what is 'broad' lighting? What is 'short' lighting?

42
How does one create the Dave Hill effect for portraits/action shots?
168
What are the best techniques for photographing overweight people?
18
What is split portrait lighting?
16
How to light spontaneous portraits?
14
What are the different kind of light modifiers and their uses?
3
What are most important accessories for indoor portraiture?
18
How to take photos of large groups (over 100 people)?
1
Cheap lighting Vs second flash for reptile portraits?
7
Types of lighting for profile portraits?