How can I reduce "ghost images" of water droplets?

I am interested in taking the photo of spray of droplets. I also want to measure their size. I have captured a streak-type image of each and every water droplet coming from the nozzle.

If you observe by zooming it, you can get a blur or "ghost image" of each droplet. How can I reduce this? 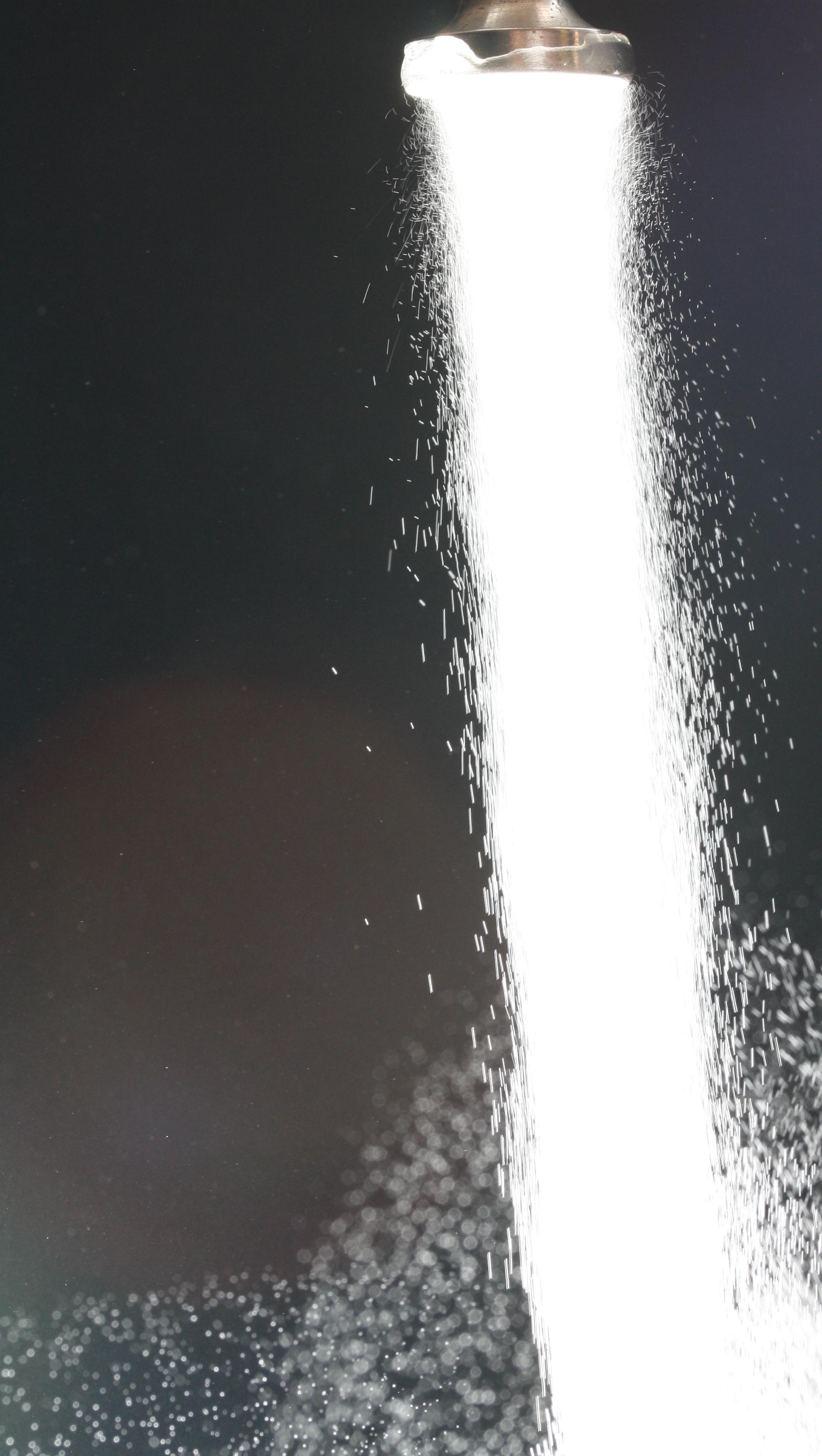 The freezing of motion has more to do with the duration of the light than it does with the speed of a shutter. Obviously, with a continuous source of light, the only way to reduce the duration of it is with your shutter, but when you do control the light, that's a very different story.

The technique I use to freeze the motion of something like water requires a very dark room, a long(ish) shutter speed, and a very brief flash (usually off camera). My typical setup, for water drops, is:

What I'll do then is trip the shutter and then manually fire the flash. It'll take a few tries, but generally I can get a very high success rate with the approach. An example of an end result can be seen on my Flickr stream and I have a lot more details on my site.

As a note, I think HSS is actually making it worse for you. The use of HSS causes light pulses and, since the duration is what matters, you will have a bunch of durations recording on your image. That isn't going to help.

I don't think HSS is the right approach for this. (I'm rephrasing some notes from earlier comments I made that maybe deserve to be a proper answer.)

Basically, the flash sync speed is the fastest duration for which the whole sensor is exposed with a focal plane shutter (as found in modern dSLRs). At higher shutter speeds, a slit made between the first and trailing shutter curtains moves across the sensor, exposing only part of it at a time. This is usually quick enough to not cause weirdness, but a flash pulse is even shorter. That means that without HSS, only the part of the frame exposed when the flash fires will be properly lit. Outside of that band, you'll get underexposure.

Leaving aside flash for a second, If your subject is moving very rapidly, the moving object may in fact become distorted, because the entire frame isn't moving at once. The Wikipedia article on shutter speed has an example of this effect on helicopter blades.

So, while high shutter speeds can freeze motion, with a focal plane shutter, they may do it oddly. It's better to use a fast flash pulse to expose the whole frame at once.

HSS works with fast shutter speeds by pulsing very rapidly over a longer period of time, effectively emulating a continuous light. (And, importantly, this reduces the available power. More on that a few paragraphs below.) With fast-moving subjects, though, the fact that the HSS light isn't really continuous may, as Joanne C points out, be causing a multiple-exposure strobe effect.

But even not taking that into consideration, unless ambient light is overpowering, HSS does not allow you to shorten the effective duration of an exposure.

Normally with flash, shutter speed has only an insignificant effect on exposure, because the flash pulse is so short and so bright relative to the ambient light. If your flash pulse lasts for ¹⁄₁₀,₀₀₀th of a second, it doesn't matter if the shutter is open for ¹⁄₃₀0th or ¹⁄₁₈₀th of a second around that pulse — only the flash duration will have any noticeable effect. (Unless the ambient light is very, very strong.)

HSS changes this, basically back to the way it is without a flash. Since the light is on for the whole duration of the exposure, shutter speed determines both your motion-stopping ability and reduces the power available from the flash.

So, why is this all important?

Primarily: the fastest shutter speed on your Canon 1000D is ¹⁄₄₀₀₀th of second, whereas at the lowest (non-HSS) power, the flash duration for your 430EX is about three times faster. Canon does not publish the specs, unfortunately, but this is typical for T.1 duration of this class of flash. (Since it's a steep curve, it's hard to decide exactly when it's meaningful to start and stop measuring — T.1 is the most useful standard, but T.5 numbers are usually quoted. This tangent is probably a whole separate question!)

Anyway, the point is: if you want to freeze motion beyond ¹⁄₄₀₀₀th of a second, you need to use a flash strobe (at reduced power). If there's too much ambient light to do that, you're pretty much stuck — but HSS won't really help any.

Let me go ahead and show this with some numbers:

At a normal-lens (50mm-e) field of view, your flash has a guide number of 34 meters — a decent amount of power. But just turning on HSS reduces this to 17. Since flash power is relative to GN squared, that means just using HSS has cut the flash's output level by two stops. Assuming aperture and ISO where already where you want them, you have to increase the shutter duration four times. This is clearly counter-productive to the goal of freezing motion.

But, it's worse than that! That guide number of 17 is only for a HSS flash duration matching a shutter speed of ¹⁄₂₅₀th. As you go faster than that, you cut out more and more of the "continuous" HSS light, reducing power further. By the time you get to ¹⁄₄₀₀₀th of a second, you're looking at a guide number of about 4! This is something like a tenth the power you'd get from using the camera's built-in pop-up flash, and _about what you'd get with your 430EX at its lowest manual setting of ¹⁄₆₄ power — which, again, gives a flash pulse about 3× faster than your fastest shutter speed.

So: that's a really long way of saying using HSS is not working in your favor.

If the ambient light is really strong and you need fill light in combination with a fast shutter speed for proper exposure, then HSS can be very useful.

Here's a good example of what I'm talking about: 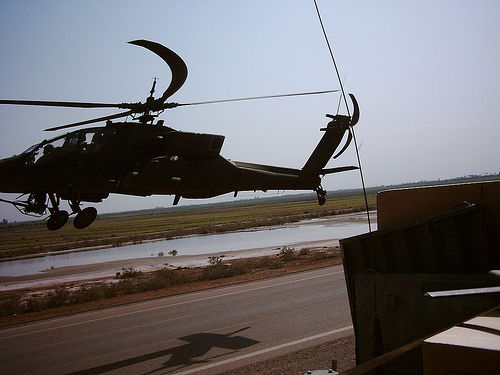 You can't measure that helicopter's rotor-width accurately and especially not its shape. If you look closely, you'll even notice that the tail-rotor is 90-degrees different in orientation than its own shadow on the ground. Sorry, a focal-plane shutter camera is out the question when precise measurements are required for any high-speed subjects. They just can't do what is needed. Not if anything other than high-speed flash is the only light source illuminating the subject in a very dark environment. It's physically impossible for them to capture an accurate image of any fast-moving subjects.

See this page http://chdk.wikia.com/wiki/Samples:_High-Speed_Shutter_%26_Flash-Sync for a reliable method whereby anyone can take exposures as short as 1/60,000th of a second under any lighting conditions, even under bright sunlight, with over 60 models of readily available and relatively inexpensive cameras. No extra high-speed flash is required. Just use the built-in flash in any of the camera models. It is also interesting to note that special-purpose and expensive high-speed flash units don't usually have flash durations much shorter than 1/20,000th of a second.

Surprisingly, one person even reported attaining exposure speeds as fast as 1/224,000th of a second with one particular camera model and external flash arrangement, as mentioned on this page http://chdk.wikia.com/wiki/CameraFeatures (Under notation 5.)

Now that your sample picture is actually visible, I think your problem may be your depth of field is too shallow. Your "ghost" drops look like they're point light sources from the reflections of your spray in the out of focus area. If you stop down your lens, you may be able to reduce/avoid this.

You may need to increase your ISO to overcome the stopping down though.

You mention wanting to measure the particle size. That's quite the challenge!

I wasn't sure about your application. If it's academic or job related, you might be interested in research going on in this area for pharmaceuticals, 3-D printing, painting, and many other applications. A quick search for "droplet stream size characterization" helped me find this paper, and there are others referred to there that might help.

23
What is the shutter speed needed to stop motion?
25
How do I trigger the flash in a way that takes luck out of high-speed photography?
13
Why does the left windmill have too many blades?

17
Can anyone recommend *freeware* to reduce motion blur by deconvolution?
8
How can I affect color of a water droplet shot?
2
How can I reduce blur with a point and shoot camera, without flash?
5
How can I capture blurry movement and freeze a subject in the same photograph?
9
How can I capture the movement of a bullet?
10
How can I reduce the effect of sodium vapor street lights in night photography?
2
How can I create long exposure images with my Ipad or my Android Smartphone?
5
How do I recreate this type of photograph - watches reflected in water
2
How do I capture fine water spray/mist against a reflective background?