Is there any noise difference between averaged and long exposure photos?

Let's suppose I'm on a tripod, photographing a perfectly still scene (also dark) and I take these photos:

There is a common thing between the items, and it's the total time used.

The EV of the first item is much higher, right? Now suppose I average the 5 photos at ISO 3200 to reduce noise, producing a single image.

After that, I take the ISO 100 photo and I adjust levels (which would increase noise) to reach the same EV of the blended photo, in a way if I look these 2 photos from far away they'd look the same.

Would the noise level be equal, comparing the blended photo and the levels adjusted photo?

I hope you understand my point.

In response to drewbenn's commentary

Also, I don't think that blending the 5 photos will reduce noise the way you think it will

Blending photos reduce noise a lot, in fact here is an example:

I took 20 photos of a tree with: ISO 1600, F4.1 and 2s exp. The upper image is showing how much noise any of those images have. The lower is showing the result of averaging the 20 photos in one.

Sory for the bad focus. 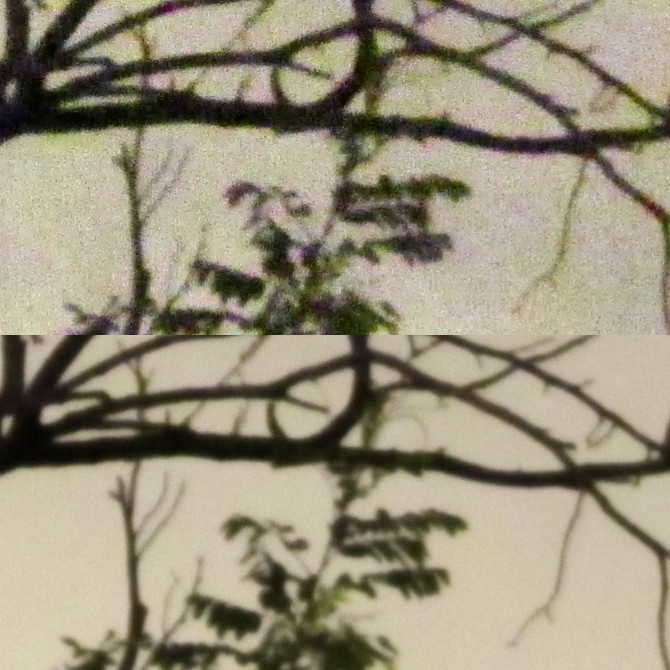 As you can see, the noise gets almost completely deleted

For the ones who are asking, I used a very simply command of imagemagick to average the images:

If I have some time later, I'll try to conduct one of those experiments you're talking about. I guess there is no a static pattern and it'll vary on each camera.

This is the Scene: 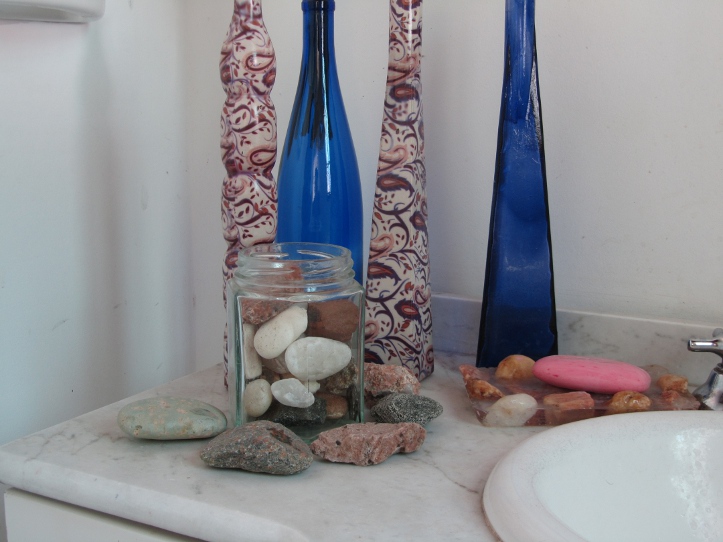 And I've taken these set of photos (the aperture is always the same), I used manual mode.

Each set has the exactly same EV, these are the results, in the same order: 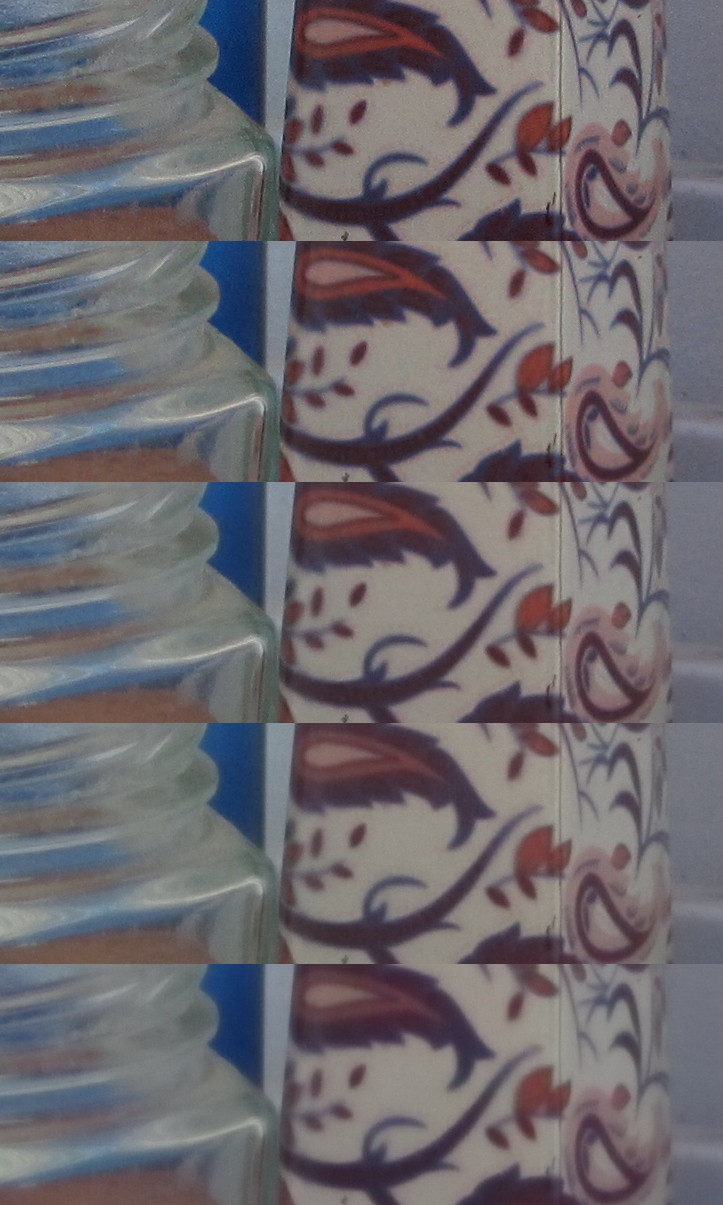 It seems that a higher ISO, there is less noise but less details as well.

Provided your ISO100 image was not underexposed I wouldn't expect a noticeable reduction in noise (except maybe in the deep shadows) with the 5 1 second ISO1600 images blended together.

In the infamous other thread I demonstrated that a 1/30s ISO100 will contain more noise (lower signal to noise ratio) than a 1/30s ISO1600 image. Same amount if light but the higher ISO had less noise.

edit: just did the experiment

I shot one photo at ISO100 16 seconds, and 16 shots at ISO1600 but only 1 second. All images were well exposed. What follows are two crops, the top row is a single ISO1600 image, and the bottom two are the 16 ISO1600 images averaged in Photoshop, and the ISO100 image. I won't tell you which way round the bottom two are, to see if anyone can actually tell the difference - I certainly can't!

This is a very nice question, but I fear that the answer is totally dependent on the performance of the sensor and its stimulus response curves.

If we think of the noise as the the error between the real colour and the measured colour, we can use an statistical model to find out how many samples with greater error we must take in order to have the same error as a single more accurate sample. But in order to do that, first we need:

Having that, it's easy to apply some formulae to deduce how many pictures of a higher ISO you need to compensate the higher noise compared with a single lower ISO picture.

In the linear sensitivity-to-noise scenario, with the same total exposure time the error should be the same... And seeing @Matt Grum's excellent answer, it seems that it is quite close to the real thing.

Technically speaking, the EV of the two images is identical. You are maintaining the same exposure with both settings, the only thing that really changes is the level of noise. The amount of noise you will encounter with ISO 3200 is going to be fairly significant, and even blending all 5 images together is probably not going to produce an image with as low noise and fine of detail as a single 5 second exposure at ISO 100.

You quoted one of Matt Grum's answers in your own answer, however that quoted statement explicitly states with the same amount of light coming into your camera. If you change from a 1s exposure at ISO 3200, to a 5s exposure at ISO 100, you are increasing the amount of light reaching your sensor. With a still scene, ISO 100 is still most likely going to be the best option. You may be able to mitigate a certain amount of noise by blending 5 ISO 3200 exposures...but you are also compounding the amount of noise by five times as well! Not only that, but you are likely to encounter both luminance noise as well as color noise at such a high ISO, and color noise is more difficult to identify and remove without damaging color accuracy and detail.

The only time when using a higher ISO would be better is when you physically do not have the option of doing so. If you were unable to take a 5s exposure, and were limited to 1s as your maximum, then using ISO 3200 is going to be the best option because it lets to expose correctly. Using ISO 100 and increasing EV with post processing at that point would digitally amplify the noise that does exist in the image...which while mostly invisible in an unmodified image, will be more intrusive than the ISO 3200 noise when you digitally increase exposure.

The only real drawback to the multiple exposure tactic is a probable loss of sharpness, at least with a focal-plane shutter SLR and an ordinary tripod. Sensels are really tiny, and making sure they are at exactly the same location for every exposure is tough. Multishot backs (for medium and large format cameras) tend to rely on leaf shutters, mirror lockup that extends across multiple exposures and a camera stand (like one of the monster Foba units) rather than a tripod.

The kind of sharpness loss I'm talking about would be at the level of putting a much stronger low-pass (antialiasing) filter in front of the sensor. Call it a half-pixel blur (anything more than a half pixel can be minimized by shifting the images before averaging). You can regain some apparent sharpness by binning pixels (a down-scaling technique that treats pixel quads as a single pixel; a sort of special case of next-neighbor).

Long exposures for a single shot have their own noise problems, particularly at high temperatures. Shooting at ISO 100 sounds like a good idea, but if the exposure gets to be really long, there's still going to be thermal noise -- and with only one copy of the image, you're stuck with whatever you get. An actively cooled sensor (like on an astronomical back) will largely eliminate the problem, but that means specialized kit. However, you can be pretty sure that the sensor will stay more or less in one place while the image is being recorded, so you'll get better sharpness.

Multishot techniques can result in less noise than single shot, especially with a good combining algorithm. If you have enough images, you can throw away the statistical anomalies before averaging at any given pixel. That's pretty much how high-res low magnitude astronomical pictures are done -- a star isn't a star unless it appears in a clear majority of captures, and its brightness is reckoned by averaging.

A part of the Matt-Grum's answer here would resolve my doubt.

If you use a lower ISO (with the same amount of light coming into your camera) you will get an underexposed image and when you brighten it in post you will amplify both the photon noise and the read noise. Your total noise will then be higher.

Not the answer you're looking for? Browse other questions tagged noise-reduction iso-noise levels or ask your own question.

129
What is "ISO" on a digital camera?
21
How do I reduce noise, given that I have complete control over everything else?