I am considering buying another flash unit. Since this one will be used only indoors, I don't care about HSS.

I find that YN-560IV is economical and perfect in specs for me.

I knew this was in the back of my head somewhere. I remembered seeing this when I got 622-TX but forgot about it: 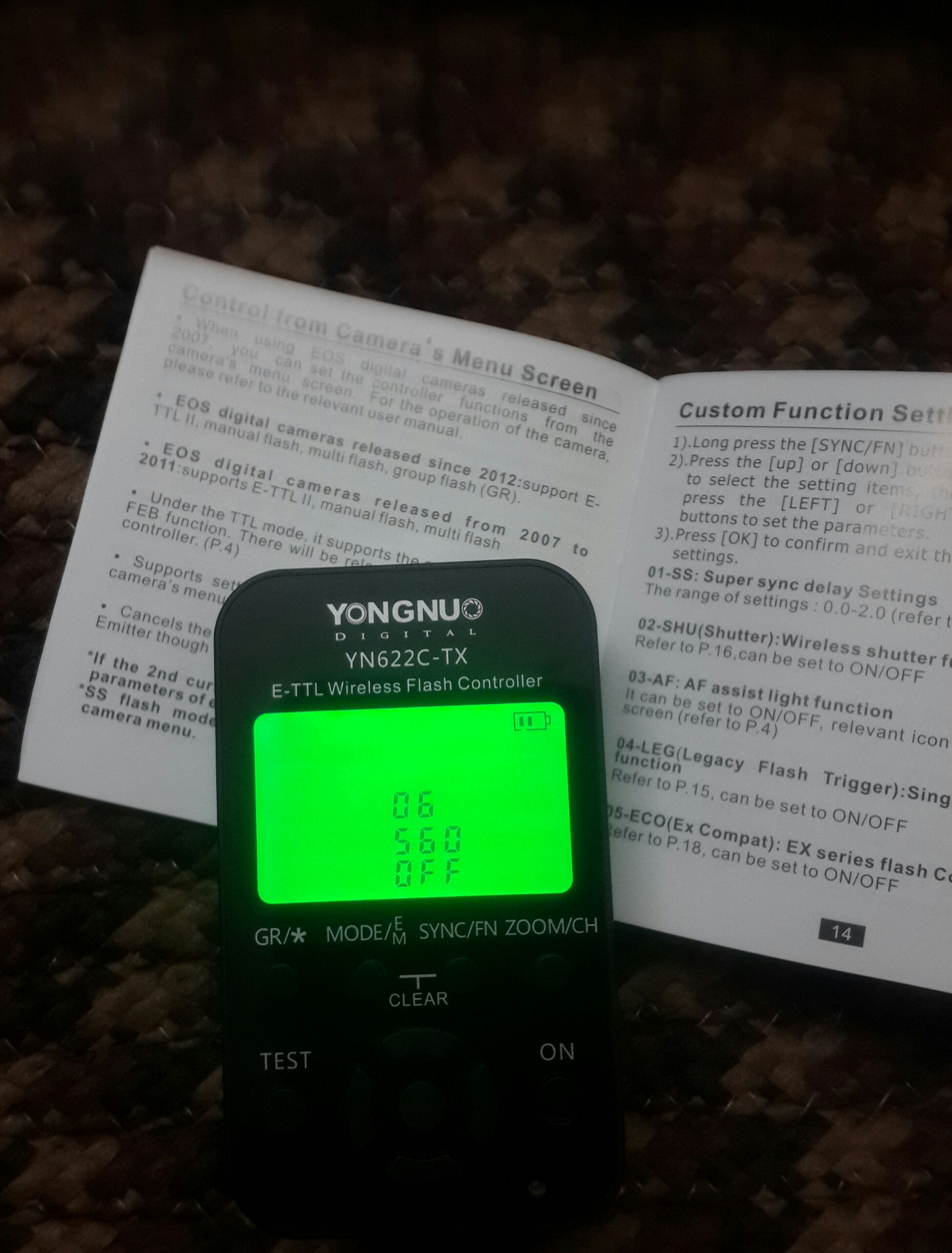 When "on" is displayed as value, Most buttons have no effect, and remaining buttons (up/down/left/right) change the value to off.

I checked and my FW version was latest, so I will keep an eye on updates. Perhaps YN are slow cooking this.

Yongnuo has never really thought of their triggers as a system. The hacked-on 560 mode in the YN-622-TX is more of an afterthought. And while you'd assume that the 622 should have the capability of simple manual triggering of 560 flashes, it does not. This is why considering triggering systems/flashes from Phottix or Godox may make more sense than those from Yongnuo if you need TTL and manual flashes to work together in the same system, or plan to grow your lighting system over time.

Personally, I'd say ditch the YN-622s and go for the new Godox X1-C TTL triggers (their analog to the 622s), and get a TT600 (Godox's analog to the YN-560IV, which has an X1 transceiver built in). Or, consider sticking with Yongnuo's 622 system, and save up the pennies to get a YN-685 instead of the YN-560IV. But this type of gear changes relentlessly, and this advice may be outdated in a short while.

Godox at this time, however, seems to have the edge, despite the newness (read: lots of firmware updates) of the X1 system, simply because they have TTL/manual triggers that interoperate at equivalent-to-Yongnuo prices, and not just speedlights and speedlights with battery packs, but also bare bulb and studio strobe options in their triggering system.

Of course, you can also go with Phottix, but higher pricetags go with their better reputation and industry buy-in (e.g., Sekonic makes a meter with an Odin transmitter in it).

Not the answer you're looking for? Browse other questions tagged hotshoe-flash yongnuo or ask your own question.

7
Are Yongnuo flashes interchangeable between dslr's or are they brand specific?

1
Can the Yongnuo YN622C & YN622C TX be used with the Alien Bees B800?
1
Can I get Yongnuo YN622C to trigger Novatron M500 strobes?
1
Can I get a Yongnuo YN622C to trigger a Nissin Di700 in hss?
2
Is there a way to "lock" a YN560 III's power setting?
1
How can I trigger two different flash groups in consecutive shots using Yongnuo YN560-IVs?
1
Can you control YN560 IV speedlights using a SB-700 in the hotshoe mount as a master?
0
Can a YN-E3-RT control a Phottix Laso Receiver?
1
How can I control manual flash settings on top of the camera using Yongnuo YN-622C II E-TTL?
1
Can I control the power and group on a single-pin flash using a manual trigger?