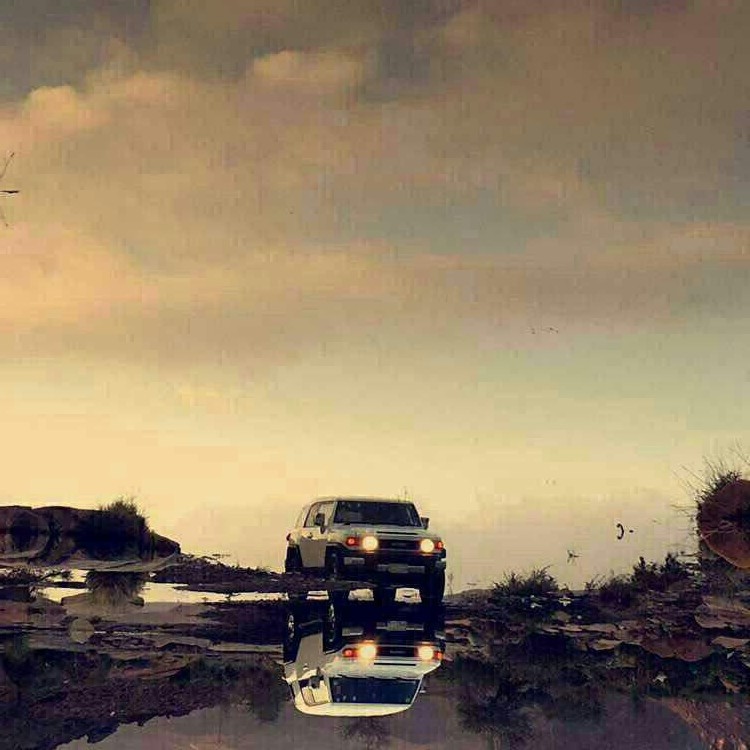 I think photo above is one of the best photos in the world. See once, then turn the image around 180°, then see again...

It's hard to tell with this low quality of image (and one which has presumably undergone some degree of post-processing), but at first glance it appears that the image is not inverted; the reflection in water is below and the real sky is above. That's because it would be quite odd for the water to be brighter than the sky — and because without prompting, one doesn't have much reason to look more than once.

But if one does take a second look, the geometry of the "above" section doesn't look right; I can't imagine how the tires would work. That makes more sense as a reflection (with a sandbar or something in the middle). And it makes the rocks to the side of the frame make sense, too — they're further out in the water, which is at a long angle. Also that little thing which looks like an old-school telephone is a branch or something hooking a little bit out of the water — if that were the sky, the only thing that would make sense is it being part of a larger object which is otherwise obscured, and that seems unlikely.

The angle also explains the difference in brightness — the background below is hills or something in the background, not the sky.

All of this becomes blindingly obvious if one rotates the image back to its actual original orientation: 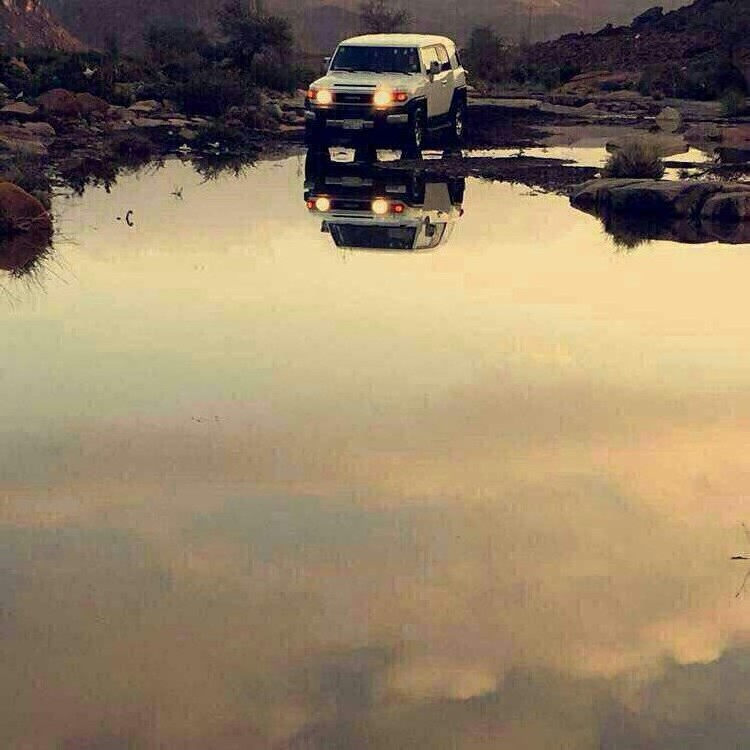 So, that leaves the question: why is it ambiguous when inverted, but immediately obvious in the correct orientation?

The brain didn't evolve to process impossible situations; it takes input from the senses and assumes that it's correct, and tries to make a rational model of the world from it. So, when we look at the inverted image, there is a fundamental unconscious assumption that seeing is believing. One has to intentionally examine the details to tease out the possibility that it's not right. Even though those details make no sense, you're working against your brain doing its normal job.

In addition to the simple expectation that "up is up", there's an inherent assumption of perspective — that the landscape (or in this case, water) recedes in the center of the frame. In the correct orientation, that is indeed true. But flipped around, it becomes difficult to visualize the angle of the water coming towards us — even when you know for sure that it does from looking at the other view, the brain really wants to make it into at least a vertical view of rocks and bushes right on the bank.

Turned the correct way, it's a humdrum photo with not that much interest, so I guess if there's any general lesson for photography, it's that creating uncertainty and messing with those fundamental assumptions definitely does lend interest.

On the comment "one of the best photos in the world" — well, there's no arguing with opinions. But it would certainly be possible to stage or discover a situation where the shoreline, lighting, and angle make reflection vs. reality even more ambiguous.

Not the answer you're looking for? Browse other questions tagged reverse-engineering human-vision-system or ask your own question.

33
How can knowledge of human perception of color be used in photography?
6
What can be done to replicate the look of Andrew Bayda photographs?
1
Why doesn't my camera capture a dark picture when it looks dark to the human eye?
1
Hard defined shadows with continuous bare bulb and flash?
19
Bokeh of the human eye - How does it look like & vary across apertures and individuals?
4
How to recognize different lighting color temperatures?
14
How to determine camera location from an existing photograph?
4
If I take a photo of a light outside the visible spectrum, what will it look like after print?
2
Methods to reproduce/recreate an IG-filter in Photoshop/Lightroom?