Is this streak across multiple photos from a (35mm) Zenit 12SD caused by a light leak?

On the first roll, maybe 2 of the 36 photos were affected by the light leak. In the second roll (color), maybe 3 images or so.

The first and last images were shot on a sunny day outside. In both cases I took a photo with the same settings shortly after I took the first, and there was no light leak (same shutter settings - 1/500). The middle photo was taken with a slow shutter (1/60 or 1/125) under low-light conditions (especially for 200 film) and was severely underexposed. The leak persisted across the photos taken after the middle photo. 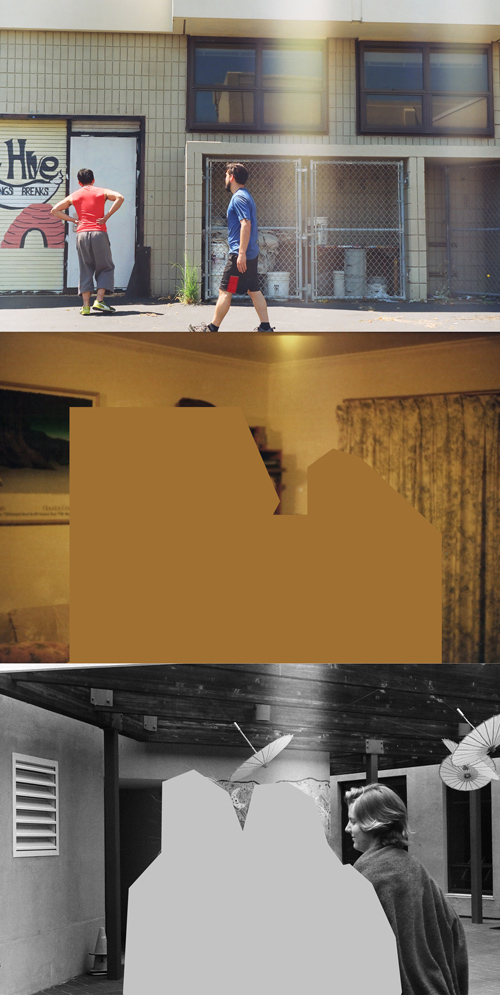 The camera appears to be in full working order. The shutter curtains are clean. What could be the causes for the streak of light? Is it a light leak or flare or a scratch? If it's likely a light leak, how can I test for it?

If it's a light leak, is it likely produced during the winding process of the film back into the canister, or is it during the shooting?

Edit: Based on the answers, I went ahead and started to investigate:

Here are pictures of the negatives: 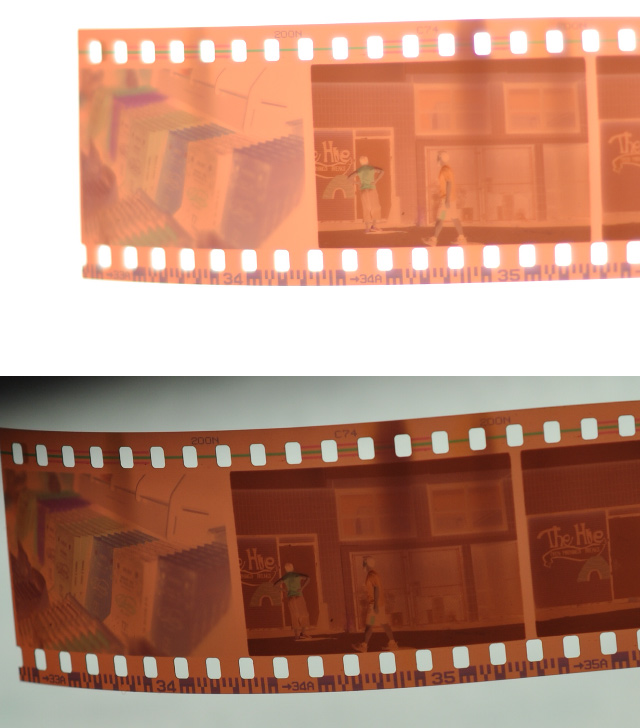 I was also looking at the shutter fabric, and noticed that a part of it was slightly reflective which somewhat corresponds to the light streak print, do you think it's related? The fabric is reflective under flash and under a certain angle. It does not let light through. This I think is confirmed by the light streak going over the numbers on the negative film. This reflection appears when the camera has advanced the film, and the shutter is wound. What do you think? 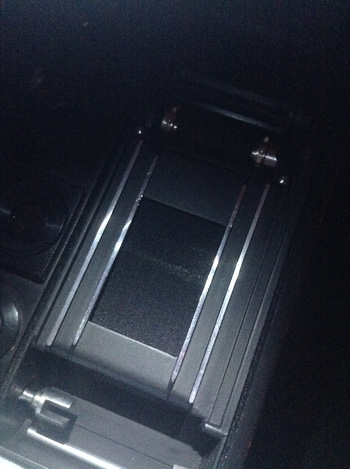 I loaded a small flashlight inside of the camera and took it to a dark closet. After sitting in the dark closer for about 5 minutes, I started noticing a very small dot of light and line of light around the back, illustrated here in red (not my camera pictured): 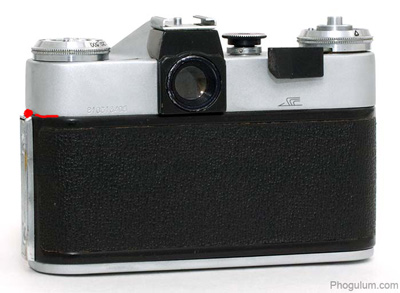 The light was leaking out at the site of the backdoor hinge, and was very subtle. Here is the flashlight I used: 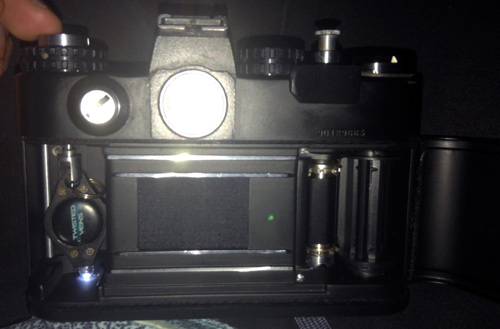 Light that leaks in will also leak out! Procure a tiny key-chain flashlight, one that will stay on. Put the turned on flashlight inside the camera. Now take yourself and the camera into a room that you can make totally dark. Observe the camera looking at all the seams etc. If you don’t see light, keep looking. It takes 15 thru 20 minutes to dark adapt. Be patient; if the camera leaks, this method will allow you to discover the source.

This does look like it could be a light leak. Since it is in the same position each frame, the leak is letting light onto the film as it sits ready for the next exposure. Since the leak seems to be coming in at the top of the picture a little right of center, the leak is at the bottom of the camera, a little left of center of the image rectangle.

How much the leak shows up in a picture depends on how long the film was sitting in position before the picture was taken, and how bright it was around the bottom of the camera. Assuming you wind the film immediately after taking a picture, the amount of leaked light in a particular picture has to do with how long it was taken after the previous picture.

A good way to verify this is to look at the film directly. If what I'm saying is correct, then the light from the leak will be evident at the sprocket holes area outside the image area.

Added in response to updated question

The reason I say the leak is at the image area as apposed to one of the spools is because the streak is in the same place each frame. Even if there is exactly one frame per revolution of a spool at a particular picture, that would change as the diameter changes due to more or less film wound around the spool. If the leak spacing was regular with regularly changing distance between leaks, then it would indicate a light leak at a spool.

The light where the cartridge goes is not all that useful in this case because it wouldn't make it over to where the leak is at bottom middle of the camera. After all, the light entering there only hits a thin vertical section of film, so light coming from elsewhere wouldn't make it out the leak hole.

Look very carefully at the light baffles where I said. There may be a nick in one of the baffles there. The fit may also not be as tight as it should be. Close the back, then press on it a little and see if it can be pushed a little more closed. If it can, then it's not being held closed properly.

4
How can I fix what seems to be a stuck Ricoh FF-3AF shutter release?
1
Possible cause of light leak in film SLR
1
Rewind button stuck - is it essential?
3
Light leaks in RB67 film handling?
1
What might have caused this Leica M6 light leak?
4
What is causing the light leak in my Hasselblad A12 back?
1
Light leaks all over the photos
2
Is my image exposure off due to shutter problems?
1
What causes these light leaks on bulk loaded film
0
Camera light leak or processing issue?