A tweet and an associated photo from the Mike Pence Twitter account showing his family situated at a table in a restaurant has generated some comments on Twitter and elsewhere. Some of the comments address the lack of reflection of the daughter in the mirror. I recall seeing videos where it seems as if people "disappear", but I do not recall seeing a photo with such an "interesting" effect. I suppose that the daughter can be hidden behind the torso of Mr Pence, but it seems a bit strange to me given the angles and the scope of the hair of the daughter.

Another explanation could be that the photo is stitched together from multiple shoots, - or perhaps that even more dramatic photoshopping has been performed.

Anyone with a good explanation for the optical effect? Do other photos with a similar effect exist?

It is simple geometry and does not involve any editing. You may see upon closer inspection that Mike is taller than the woman sitting aside and she also sits somewhat behind. Photographer stands exactly in the position from which the woman is not visible at all.

On the scheme below 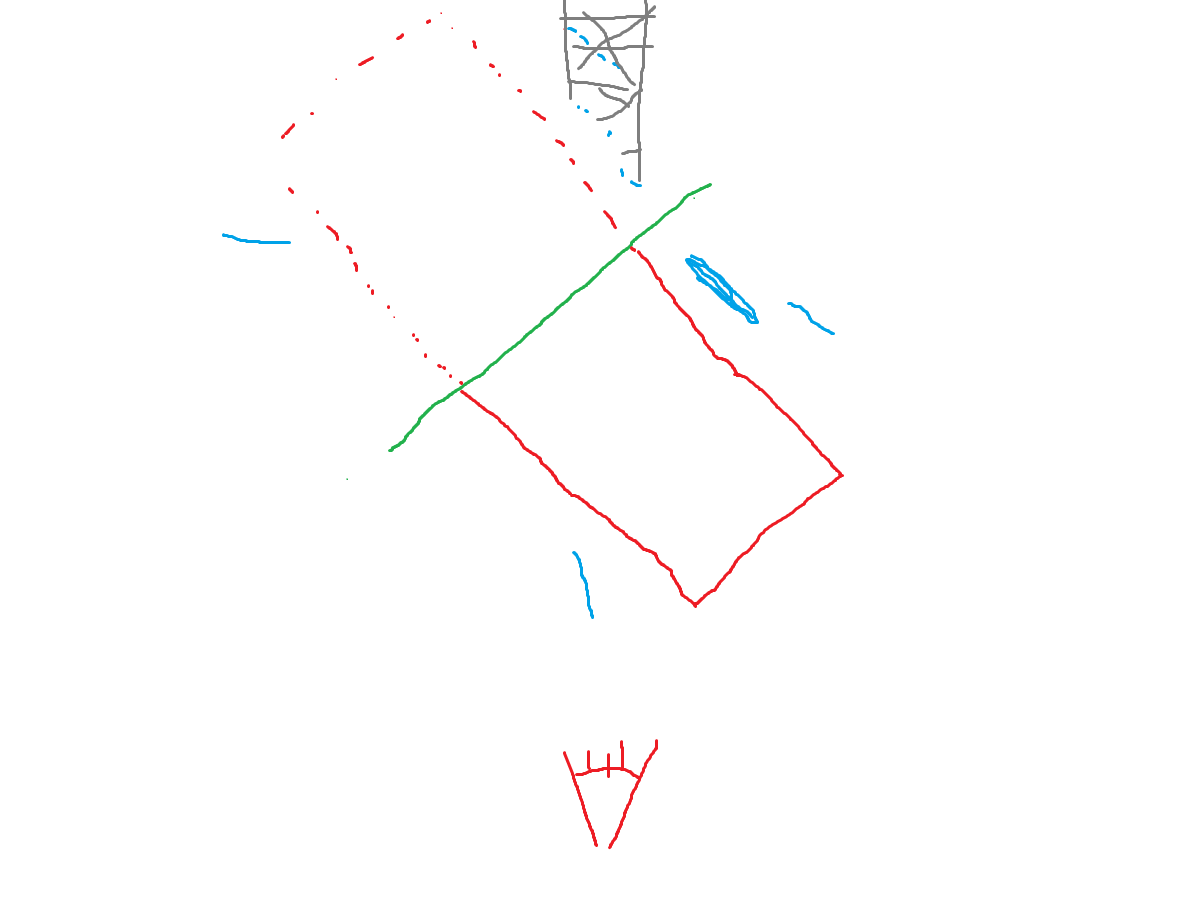 Here is the explanation using PS CC. The daughter is short relative to dad who is fairly large, like mom. The daughter is a good head shorter than he is and he is farther away from the mirror. Key to seeing it is knowing the mirror must be level and the wall lines at 90 degrees:

In drawing the lines I did not attempt to make any judgments re perspective or photographer's viewpoint - I just linked what appear to be points and their corresponding images.

Assuming that the normal laws of optics concerning reflection apply, the marked up image below strongly suggests that his daughter is almost wholly masked by him visually.

I say 'almost" as there appears to be a small part of her reflection (circled in blue) just behind his head.

But, that said, Mandela E's analysis may be wholly or partially correct. 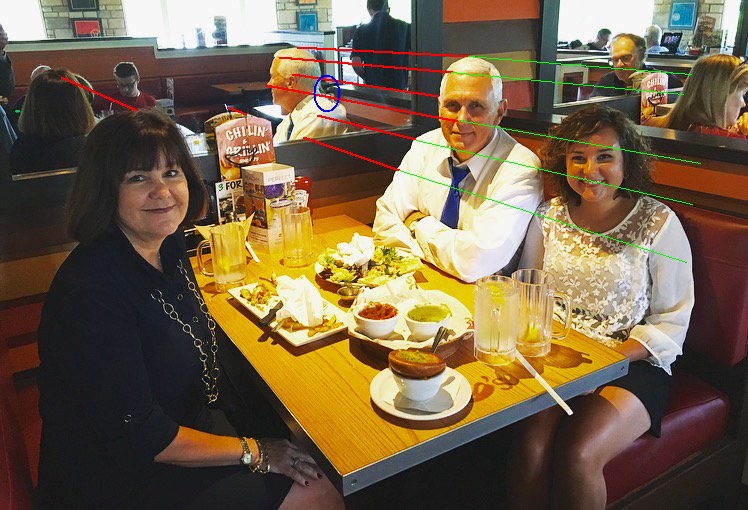 Let me try to answer this myself. I think there are three issues that might explain why the deaugther is "disappearing":

So I downloaded the image from Twitter and opened it in Photoshop for a close examination.

I have labeled the points of interest in the attached image from 0 to 9. These labels are the only alterations I have made to this image. Here is the .psd file resulting from my labeling for any skeptics to compare to the original as posted to Twitter.

LABEL 1: Circled area contains what appears to be the paper wrapper of a straw. I've circled this item to call attention to the shadow beneath the paper, an expected feature when the paper is of three dimensions (in other words, not flattened into a strip) after removing the straw. Note that this item, by itself, is not out of place unless compared to the item in label 6 (below).

LABEL 2: Circled area contains a portion of the jewelry worn by Pence's wife. Notice that one of the links, the border of which should extend to cover a small area behind which the table can be seen at the item in label 3, is in fact completely missing, as if it had been sliced off that link of the necklace. Upon closer examination, the color values for the necklace links which should appear at that exact location are completely absent.

LABEL 5: Contains two pixel-perfect lines of dark color, one horizontal and one rotated exactly ninety degrees to vertical, which appear to be intended to be a curl of hair. Also note the lacy pattern of the top of the blouse, which eliminates the lace as a possibility of the origin of this artifact.

LABEL 6: Contains what is in my opinion the most egregious telltale in the image. The circled area contains the wrapper of a straw as in the item found in label 1. However, note that the expected shadow is in fact completely missing, not only from the table top, but also missing from the edge of the table at the location this item overhangs the edge. Given the angles of light involved, and regardless of whether the paper tube had been flattened or not, a shadow falling across the forward edge of the table is expected and is completely absent.

LABEL 7: Circled area contains another sloppy blur operation following image compositing. In this case the doctoring is even more obvious; the color values of the slight reflection of light along the bottom of the forward edge of the table simply vanish when they should not, only to reappear along the edge as the edge moves from left to right. Very, very, very sloppy.

LABEL 9: Circled area contains a pixel-perfect vertical line at the edge of the image composite. In this case, no effort at all was made in even as much as a cursory attempt to properly blur the edge following compositing.

Feel free to take issue with my observations.

BONUS: Look at the reflection of head of the woman on the left. What is the lump sticking out from "behind" her head in the reflection?

EDIT: BONUS 2: The standing vertical angle of the left-hand drink glass in the foreground of the image is very, very slightly rotated off of true. May be something, maybe not. Doesn't look right. 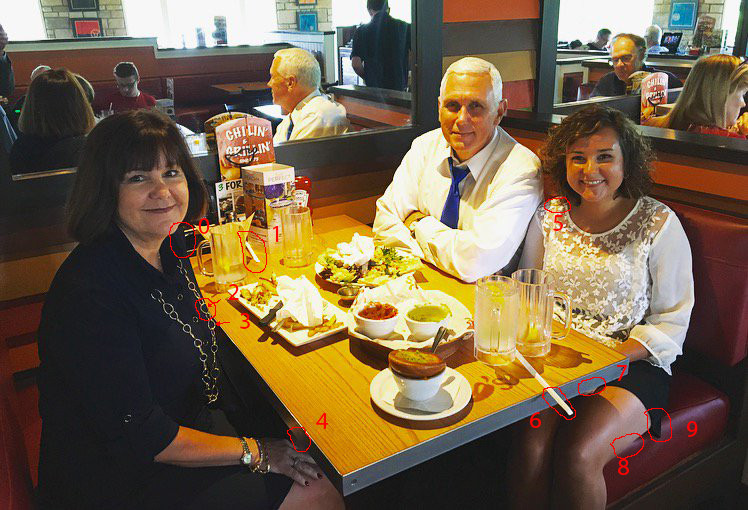 A reflection in a mirror is to be the same apparent distance from the mirror as the real image.

If Mike were to be positioned closer to the mirror, with his position as far forward towards the table as it is, he would indeed eclipse his daughter.

This is what we see inside the reflection.

HOWEVER, if we observe his apparent real distance from the mirror, he is quite far, and the same can also be said for his sister who is seated across from him: She is also sat very far from the mirror, while her reflection is very close to the mirror.

Also ask the question: "Why was the son in the shirt of red seated at the table, but so far distanced from said table as to not appear directly in the photograph but was still in the aforementioned reflection?" This cannot be explained so obviously as a fakery but it should bring your attention to the motives of those in the photograph.

DO NOT MISS: The woman with the dark hair has another presence behind her reflection. It is spherical in appearance like that of a person with a helmet (although that would make less sense). Nevertheless, there is a thing of some that is within the reflection but not within the reality?

The boy hiding in Red, The white man who has moved closer to his female, The brunette with a ball in-front of her face,

There were a few people there that day and a few who were not.

Leg shadow lacks the required level of angle that is expressed by the glass that is seated right close to the edge of this table. The thing is see that the table does not produce any angle on her leg. Even though it is even further from the proposed light source, instead this table's shadow projects directly downwards. 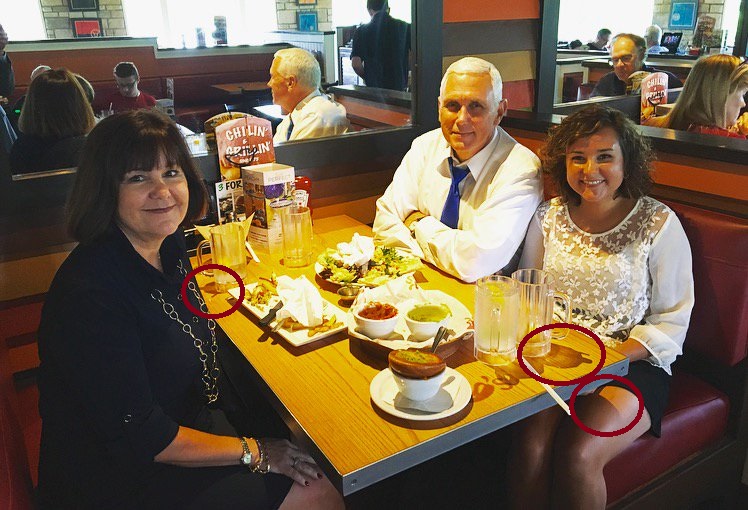 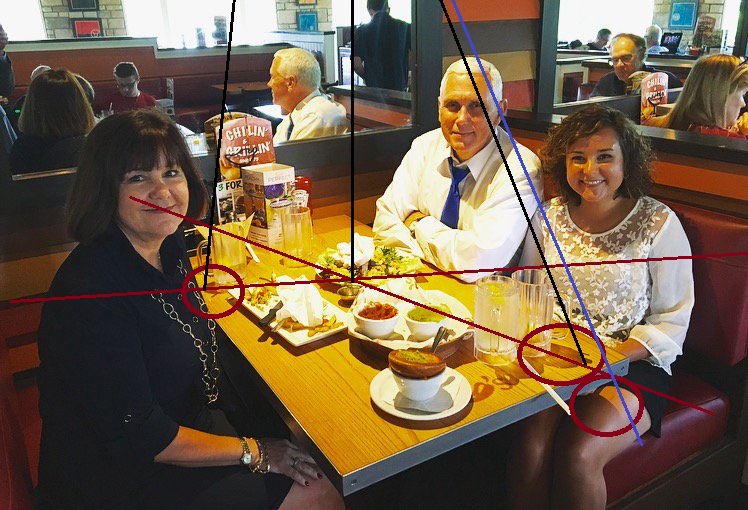 Not the answer you're looking for? Browse other questions tagged reflection or ask your own question.