Can I safely use my camera with a external power supply?

I have a Canon SX210 IS, which doesn't have the possibility to plug-in a external power source.

Because of that, I want to make a connection to the pins where the battery usually is. I'm a little confused about the voltage requirement because the battery says 3.7V and the base of the camera says 4.2V.

Since I have a car battery and a 7805 voltage regulator I thought I could power the camera directly with the 5V the regulator would give me. But I don't know if it's safe to do that.

You may ask why would I want to power the camera with 5V instead of using 4.3 from a DC regulator. Well, I'm outside the city right now so there is no way to get a DC power supply like that.

I've found out that my helicopter charger has a voltage of 4.2V and a maximum current of 850 mA, but it's a typical switched power supply (like the cell phone ones). Is it dangerous to feed my camera with that? What about a little paralell capacitor to filter noises?

canon powershot power-supply
Share
Improve this question
edited May 13 '13 at 20:32

I looked up an SX210 manual online, and it says that there is an external power port. Look at page 156 of your user's manual; the online guide I found recommended the ACK-DC30 kit. You plug a coupler (which has the same form factor as a battery) into the battery bay, and plug the AC cord into a slot in the battery door. The ACK-DC30 is $50 on amazon; you can probably get an off-brand version for less, too.

I wouldn't recommend doing this. You have no idea whether the 4.3v marking on the camera is some engineer being conservative (in which case the camera can probably take something a bit higher... maybe), or that there's a component in there that's gonna fry as soon as anything over 4.3v hits it.

Seriously, don't take chances unless you don't really care if the camera gets fried. If you can't afford to lose it then it's way better to be right than to be fast before you connect anything up. The correct regulator is going to cost much less than buying a new camera 'cause you fried it...

Found a solution: a $5 DC to DC Converter like this 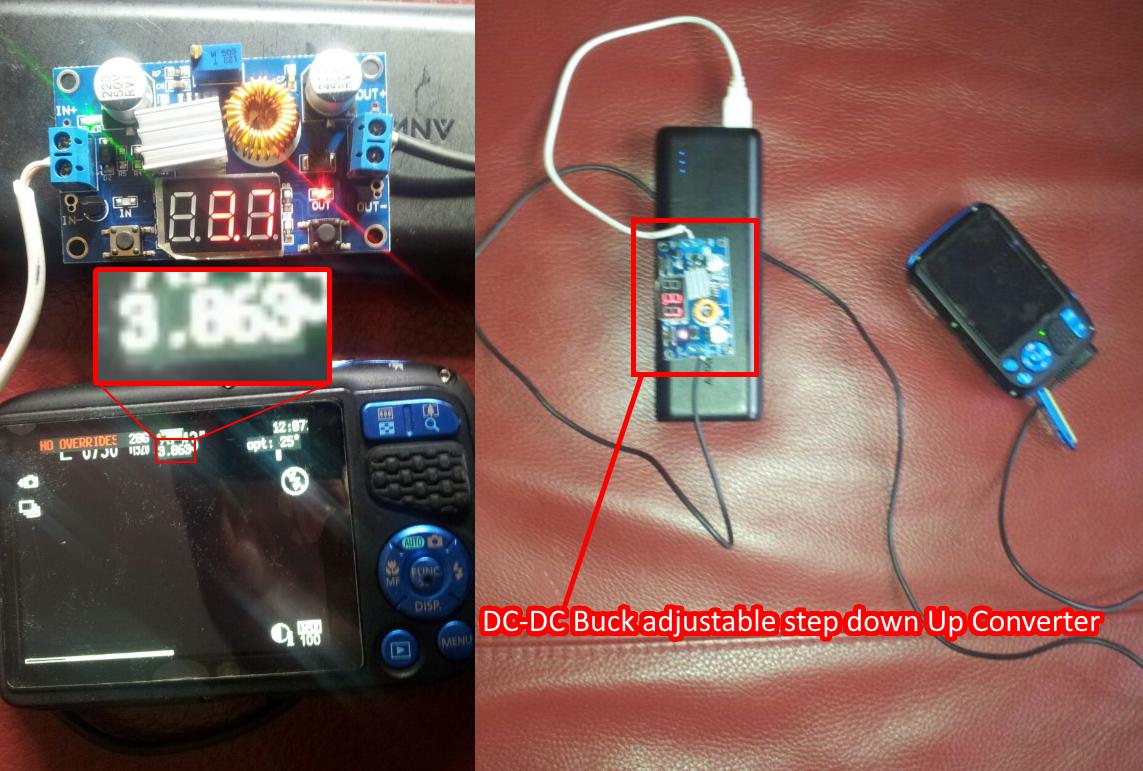 Also you need to cut off 2 cables and remove the isolation and attach them to the DC converter.

Not the answer you're looking for? Browse other questions tagged canon powershot power-supply or ask your own question.

0
Canon D30 4.3V powered with PSP charger 5.3V
9
How to fill my time-lapse video with more frames?
1
Do I risk damaging my camera if I use an aftermarket AC adapter?