What is the most general theoretical reason images out of focus appear blurry?

Don't know if I should ask here or physics for optics. But I am wondering how come images out of focus appear blurry?

It seems to me that if a given lens geometry has a given focal length, then image sensor placed at that focal length would just have a dot at the center pixel as the entire collimated light entering the lens is focused to a point. So really the image sensor should be positioned before the focal point.

If this is true then it would seem notions of focus are really just magnifying the image, perhaps the image would be blurry due to extreme magnification and imperfections of optics or something?

The camera lens acts just like a movie or side projector lens in that it projects an image of the outside world on the surface of the digital imaging chip or film. Now the lens works by causing light to change directions. As the light rays from objects transverse the lens, they are caused to bend inward. This action is called refraction. It is the shape of the lens and the density of the glass that does this trick.

The new path of the imaging rays traces out the shape of a cone. When the light rays reach the apex of the cone (pointy end), they spread out. A drawing of this action resembles two ice-cream cones placed end-to-end.

We focus the camera by moving the lens forward or backwards (towards or away) from the chip or film. This distance lens-to-chip (film) is the “back focus”. The image will be in-focus and thus sharp and clear when the apex of the cone just kisses the surface of the imaging chip. This distance is a variable based on the distance, object-to-lens. If the focus is just right, the image- forming light produces a super tiny illuminated circle. If the back focus is wrong, the circle of light will be too big. To make a sharp and clear image, the circle must be super tiny. It must be about 0.5mm (1/50 inch), or smaller. In other words the tiny circles that make up the image must be so small that they are perceived to be only points of light. If we see them as circles, the image will appear to be blurred. So we focus the camera to obtain the smallest possible circle.

Since each point on every object we are imaging results in a tiny circle being projected on chip or film, there will be countess such circles. If we could make a perfect lens, the circles would be perfectly round and super tiny when the camera is properly focused. We can’t make such a lens. In actually, the circles are imperfect and they overlap. When we look at them with a microscope, we see jumble of different overlapped shapes. We call these “circles of confusion”.

The camera’s image will be sharply focused only if the circles of confusion are so tiny they can’t be resolved by our eye. If you look at newspaper photos and comic book pictures, they appear unsharp. That’s because the dots of ink that makeup the picture are too big. We see them as dots, not points. The newspaper must be printed on inexpensive paper and the ink spreads out too much to make super sharp pictures.

It sounds like you are referring to the thin lens formula, but your interpretation of the geometry has led to some wrong conclusions.

It seems to me that if a given lens geometry has a given focal length, then image sensor placed at that focal length would just have a dot at the center pixel as the entire collimated light entering the lens is focused to a point.

Diagrams will help immensely here. You are describing the standard diagram which explains that the focal length of a lens is the image distance to the lens when the lens is focused at infinity: 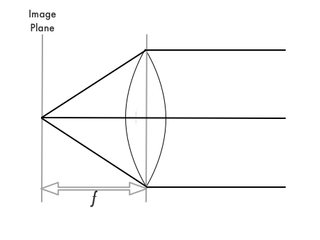 The following diagram shows red and green collimated light. The rays through the center of the lens are called the principal rays. Any light ray coming into the lens parallel to a principal ray will be focused to the same spot on the image plane that a principal ray intersects. 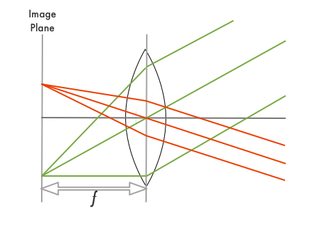 Revisiting the next sentence from your question,

So really the image sensor should be positioned before the focal point.

Then you are changing the image distance. Moving the image plane closer to the lens moves the distance that subjects are in focus (the focus distance) farther away from the lens. In the case of the above diagrams, that would have us focusing past infinity, meaning nothing is in focus. 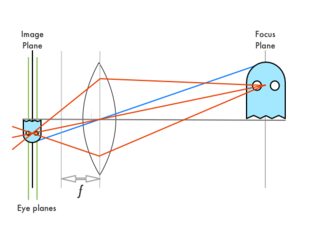 Not the answer you're looking for? Browse other questions tagged focus optics or ask your own question.

34
Technically, why is the out of focus area blurred more when using a bigger aperture?

9
Why are objects far away inverted through a lens but not through the viewfinder?
2
What does it mean for a telecentric lens to be focused to infinity?
2
Does focusing at infinity mean the sensor is at F?
3
Why does illuminance stay the same for a given f-stop even when focal length changes?
2
Why can my eye focus on the real image of a convex lens at many distances from the lens, but a projection only works at a specific distance?
43
Can you tell from a blurry photo if focus was too close or too far?
1
Is this the limit of the camera image quality or is the subject out of focus?