My 35 mm film is not rewinding into canister — was the roll even used?

I thought I loaded the film properly because it advanced correctly for all of my shots, except that once I got to the 36th shot, I was able to continue to advance the roll many more times. Usually, I can tell when the roll is finished because I physically can't advance the film beyond the 36th or 37th shot.

Concerned by this, I rewound the film in the usual way (by pressing the button on the bottom of the camera and then spinning the rewind lever), but I never felt any tension, nor did the picture counter dial back as usual. So, I went into a completely dark room and opened the back of the camera and then noticed that only a part of the film was left outside of its canister (about the amount you usually pull out when loading the camera).

So I took out the film canister from the camera and tried rewinding it by hand (by spinning the knob on the canister), but the film wouldn't rewind.

Now my question is, did I even shoot this film in the first place? I don't think it is possible that I could have rewound an entire roll of film without feeling the usual tension or seeing the picture counter dial back. If this is the case, how come my film advanced all the way to the 36th shot (even past it) giving me the illusion that everything was working correctly?

Also, before I took the film canister out of the camera I tried to see if it would advance, and it did advance just fine. So the film is advancing, but not rewinding back.

I do know how to rewind film back manually, by the way. I tested a spare roll of film and it worked just fine.

The film is not damaged in any way (except for being exposed). 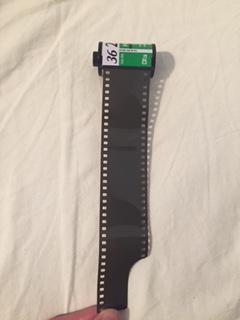 I have an AE1, On the AE1 the film counter will continue to progress ( the numbers will keep advancing) from 1 to 38 regardless of whether or not there is film in the camera, if there is no film in the camera you can keep actuating the shutter (after 38 is visible )and using the film advance lever forever.

For the winding problem two possibilities. When you opened your camera and saw that the leader of the film was still out of the cassette then either

2- the film was not properly loaded and the sprocket pins did not grab the sprocket holes. ( this is the most likely scenario and is supported by the fact that the counter did not run backwards while turning the rewind knob )

Now for the film not being rewindable by the camera or by hand would suggest that the tape that holds the film to the cassette spool has failed.

I would surmise that you did not expose the film, ( it did not advance in the camera) coincidentally and confusingly, the film cassette was not rewinding properly.

You can do a test clip, go into the darkroom ( no light ) pull out 3 or 4 inches of film and cut it off (leave enough to cut a new leader ) develop the clip and see if there are any images. If the film is not exposed you can open the fuji cassette take the film and load it onto a bulk film re-loadable cassette and use it as normal or shoot the fuji cassette in your camera but you will not be able to rewind it back to the cassette, you will have to take the camera back to the dark room to open the camera, push the rewind button, carefully and straight pull the film out of the camera. develop or put in light tight canister to take to lab.

Or write the film off as a loss open it in daylight and see why i will not rewind. Let us know.

Not the answer you're looking for? Browse other questions tagged fujifilm 35mm or ask your own question.

3
My roll of film didn't rewind inside all the way
6
Olympus OM-10 35mm - Film not gone all the way back into the cartridge
0
Manually rewind unused film to its canister
4
How can I fix what seems to be a stuck Ricoh FF-3AF shutter release?
1
Film did not rewind
2
35mm White line across photo / Yellow tint all over exposure
5
First film roll just got developed and all my pictures have a white fog on them?
0
The film in my film camera won't rewind. 31 frame flashes intermittently