What's causing this weird motion blur in my long exposure?

I'm shooting with a Canon 5DMkIII, and I'm experiencing a weird motion blur with the LEDs in this picture: 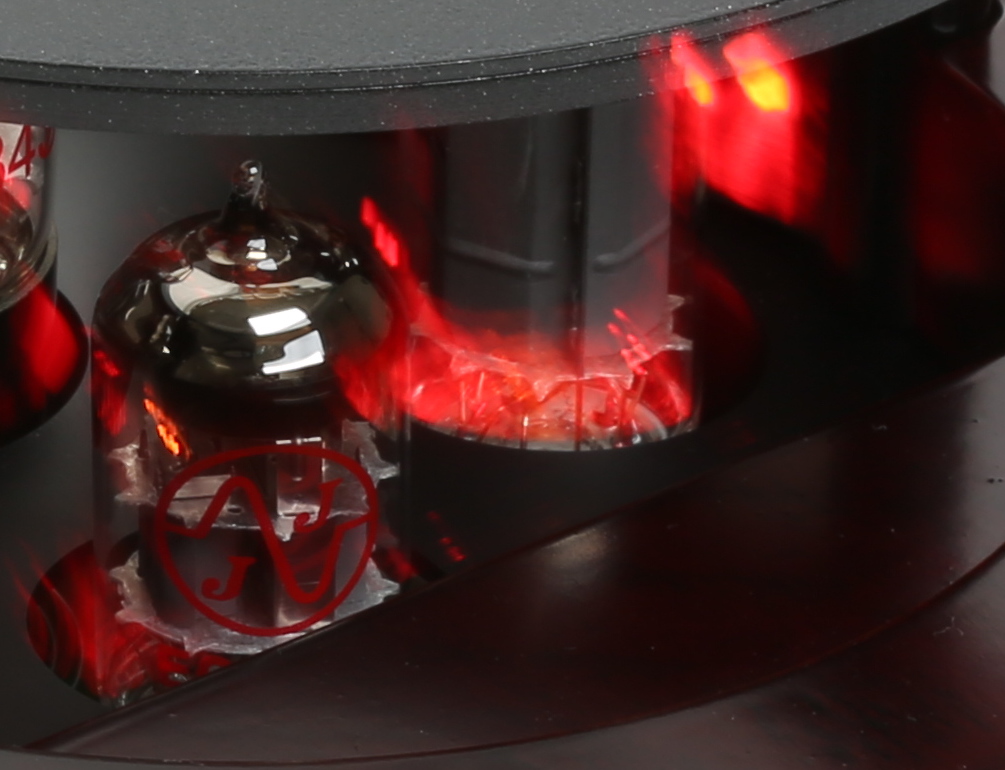 It's a long exposure shot (30 seconds) in a dark room with an initial flash. The camera is on a tripod and the product is on a table—nothing should be moving enough to cause that effect.

Does anyone know what might cause this? Could the table or tripod be moving somehow in an unnoticeable way?

Are you using the mirror lock-up feature for this shot?

If not, it's possible the motion of the mirror in your camera is causing an initial vibration, resulting in the blurring of the LEDs vacuum tubes. Try the same shot again, but using the mirror lock-up function of your camera.

Edit: New theory. I don't believe there are any LEDs in the image. There are at least 3 vacuum tubes visible (center, left, and far left (mostly cropped)). The red glow at their bases is characteristic of valve operation. I believe the brightest red glow at the upper right is also the base of a tube.

I assume this is a tube amp, perhaps an amplifier head for an audio system or guitar amp. If the long exposure is being taken while the amp is driving speakers loudly, then there could certainly be some audio vibration of the amp, the camera, or both during the exposure.

You said the amp is on a table, and the camera is on a tripod. What are the table and the tripod on? If they are on a joist floor, or stage, it's entirely possible the floor is vibrating. Depending on how everything is set up, floor vibrations could cause the amp, or camera, to have forward/backward motion.

Even somebody just walking across a joist floor or stage could cause enough jolt to be visible in a long exposure image.

I do not think your tripod or table is moving, the solid items in the photo are stable and sharp.

What your seeing is most likely related to the light from the LED's reflecting or refracting off glass or reflective surfaces during the long exposure. or even off dust or smoke. Try the same shot with the LED's off to prove or disprove this.

If the room is dark enough then it could well be that either the camera or certain elements of the scene are moving. If the flash is the only illumination bright enough to expose everything, other than the LEDs and the reflections/glow given off by the LEDs, then even if everything were moving the very short duration of the flash will freeze what is not illuminated by the LEDs in place. Those things that are illuminated by the LEDs for the entire 30 seconds, on the other hand, will exhibit the blur caused by the motion.

Are you using a filter, even a UVA filter? It looks very much like reflections you often get in dark scenes,where bright objects actually reflect off the primary lens element, then off the back of the filter glass. If you are using a filter, try removing it from the shot.

Being this close, there is little separation between the object and reflection, while with more distance, there is greater separation.

Your question is confusing, because, I have no clue what is that you are photographing.

with an initial flash

I gess that "Initial flash" is exposign the bell shaped thing, the column, and the logo. That is why it apears frozen, without moving. Some answers are asumming the tripod stayed still because the bell is sharp, but that is because of the flash.

The red smudged thing I have not a clue what that is. It could be you moving your camera to another planet. or a led ghostly apearing infront of the camera or movin arround. There is no way to know what that red light is about.

The problem is that on the flash iluminated area there is no aparent source of led light. So Is that a reflection?

The shaking can come from:

Or it may be related to the flash, is it used outside the socket? It may be causing some balance problems. I think that the shaking might come from the first one, but in case you're already using a remote control, try using wireless or the timer as said above.

First, there is no motion anywhere in the picture, so this rules out the shacking of the tripod or the camera or the table or an earthquake or what else: yes, there strange lights here and there, but if something had really moved you'd have seen it into the entire picture, not just few areas.

That said, those are Vacuum tubes (from JJ Electronics, but I guess you already know that as you call them "the product") and probably they can generate this kind of glows. They produce light and heat during their working, so maybe they can have generate short discharges producing those light areas.

In the end, my simple guess is...ask on Physics.se or Electronics.se, they'll surely know better which physical effect can cause those glows. Or you may just ask to JJ itself...they are the producer, after all :-D

Not the answer you're looking for? Browse other questions tagged long-exposure motion-blur or ask your own question.

19
ND Filter not Dense enough - How do I get long exposures in very bright situations, where my ND filter isn't enough?
13
How can I prevent blurred images when using a tripod?
4
Why do I have blurry star trails?
8
Why are the trees in this long exposure night shot red?
1
Controlling style of motion blur in long exposure photos?
6
How can I get a clear subject with motion-blurred (traffic trails) background?
6
How is the circular motion blur created in this Instagram image?
2
Blur/Double vision
0
What is the max. exposure time when using an iOptron Pro mount with a EOS 70D & telephoto lens?