I'm confused after reading the question and the first reply. The asker asks,

I'm becoming more interested in landscape photography and want to add to my Nikon DSLR a wide angle lens, but I dont really understand what this means. According to Wikipedia (not the most reliable source I know!) common wide angle focal lengths are 35, 28, 24, 21, 18 and 14mm.

So this does this mean that the kit lens that comes with the Nikon (18-55) is considered to be wide angle at the shorter focal length?

Also, what is the difference between ultra-wide and normal wide angle? And would an ultrawide be useful for landscape photography?

The question doesn't mention about the type of camera body (DX/FX) or lens (DX/FX). To my knowledge, for the explanation to be true, it has be an 18-55 FX lens mounted on a DX camera body. Can't then only the crop factor (1.5X) kick in? But, 18-55 FX lens does not exist in Nikon lineup.

You have it backwards.

A focal length is a physical property of the lens, and that doesn't change just because you change the size of the sensor you put behind it. What you need to do is to think of using a smaller sensor as cropping.

From the dpreview review of the Canon 5D: 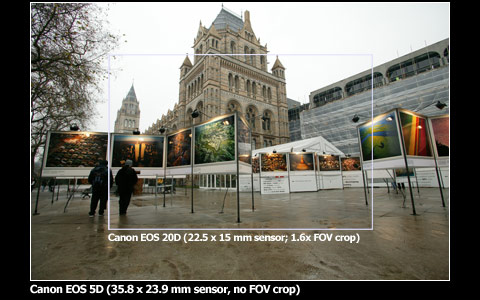 No. The focal length of a lens is the same no matter what size sensor is in the camera body. But a smaller sensor sees only the middle part of the image that the lens projects, so the field of view as seen by the sensor is smaller than that seen on a full frame camera. So, even though the focal length ƒ is the same, the lens gives the same field of view that a longer lens would on a full frame camera.

The reason that Nikon lenses have a FX or DX designation is similar to the difference between EF and EF-S lenses in Canon's system. Lenses made specifically for use with APS-C sized sensors don't need to project an image that can cover a full frame sensor, which means that the optics can be smaller, lighter, and less expensive. You can put a FX (or EF) lens on a DX (or EF-S) body with no problem -- the large image circle will still cover the sensor just fine. But if you put a DX lens on a FX body, the image won't cover the entire sensor. For that reason, Nikon full frame bodies have a DX mode that uses just the center of the sensor. Again, because the sensor (or the part that's being used) is smaller in DX mode, you have to factor in the crop factor to figure out what field of view you'll get with a given lens, but the focal length remains the same.

Lenses are described by their focal-length because this is a physical property. It does not change with sensor size.

The 35mm format - now known as full-frame - has become the de-facto standard even for fixed-lens cameras. This is why you see small ultra-zooms with lenses described as 24-240mm but if you read the labeling on the lens itself, you will often see that the actual focal-range is something like a 4-40mm (made up numbers for easy math). Since people are assumed to know what angle-of-view a 24mm or 240mm lens on a full-frame produces, 24-240mm conveys more information than 4-40mm.

Not the answer you're looking for? Browse other questions tagged crop-factor or ask your own question.

38
Does my crop sensor camera actually turn my lenses into a longer focal length?
11
Why do Full Frame lenses and crop body lenses exhibit the same crop factor when used on a crop body camera?
86
What is “angle of view” in photography?

86
What is “angle of view” in photography?
8
How do I get the 'equivalent' focal length for a DSLR lens for my camera?
11
Why do Full Frame lenses and crop body lenses exhibit the same crop factor when used on a crop body camera?
6
Do I use the crop factor in calculating aperture size and area?
1
Equivalent focal length and aperture of 150mm medium format lens on a 35mm camera
1
Crop Factor: Can a full-frame Nikon Camera be set to use a DX lens, with no crop-factor?
1
Does 4.0-72mm on the lens when equivalent focal length is 24-432mm mean crop factor of 6×?
5
APS-C crop factor 1.5x or 1.53x
0
Using FF lens on APS-C changes lens aperture value?