I have a dslr camera which does not have a flip screen. So in situations where i want to take a shot from very low angle, It is very hard, compared to the flip screen available situation. Is there any tips or tools which helps me to handle this situation ? May be i can connect my camera to my phone and use the phone as the screen with the help of some app ?

The flip screen, usually called rotating screen is a liability. Even tilting screens are more fragile than a fixed one, so your camera is tougher for the matter. This constraints flexibility of composition but it is usually easier to keep things level when using the viewfinder, even if you have to crouch. There are a few things you can do to help with that:

You could consider a right angle viewfinder. 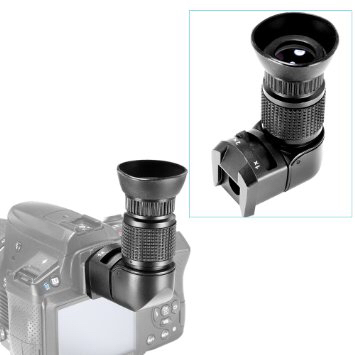 They just clip onto the viewfinder where the little rubber eyepiece goes. Generally they rotate left and right a bit to give you a bit of flexibility in how you position yourself, and you get to physically see through the lens which can be better than using the live view image on a screen.

As someone else suggested, a mirror would give you similar results for considerably less.

Practice until you become familiar enough with your camera and lenses to be able to "shoot from the hip" with a reasonable expectation of success.

Not every camera that has been used effectively in the past had a way of seeing the exact scene immediately prior to taking the image. Many historically and artistically significant images were made without a real time view of the camera's field of view. Even focusing was a guessing game assisted by aperture and distance scales on lenses.

The next time you watch the end of a major sporting event or the circus outside a courtroom as a high profile personality is going to or from the trial look at all of the news pros (stills and video) in the shoulder to shoulder crowd shooting blind with their cameras held high over their heads. Very few of the still cameras have movable screens because not only are the screens themselves more fragile but they also make it more difficult to seal the camera body from weather and other harsh environments.

Start with the widest angle lens you have and go from there. Experiment with different AF modes and selected points to see what works for a particular type of composition. You'll be surprised at how proficient you can get at it with a little practice!

Are they counting on just luck to help them? If you rapidly shoot 1000 images you are going to get a few good ones?

"Luck is what happens when preparation meets opportunity." - American football coach Paul W. "Bear" Bryant upon being asked why his teams seemed to have better luck than his opponents in close games.

Practicing something enough until it becomes an acquired skill and enables one to get a "lucky" shot when the opportunity presents itself seems to be beyond the grasp of many today. Too many people are quick to dismiss anything that they don't understand or that they can't duplicate as "fake" or "blind luck."

In "pre-digital" days you only had 24/36 frames until your "buffer" was full for a 35mm SLR. You had even less if you were shooting 120 format roll film in a Speed Graphic. Nobody shot 1000 images of anything. Sure you may take a couple of extra safety shots, but you had to learn how to point the camera without having your eye glued to the viewfinder.

There were, however, motor winders that attached to the bottom of the camera that allowed shooting at a blazing 2 fps! And you could get a film back that could hold a roll about 100 shots long. But those things were way too heavy and bulky to use free hand over the head.

I was at the end of the field shooting a high school band warming up for their halftime show at a football game last fall. Just as the band departed their warm up area past the end of the field the game action moved to that end of the field. I shot a few plays from well past the end line to get the framing I wanted as one of the teams tried to drive down the field before halftime. (My band was the home team and would be the second band to perform following the visiting band, so I had some time to spare.)

I got this frame of a long pass attempt being broken up at the goal line: 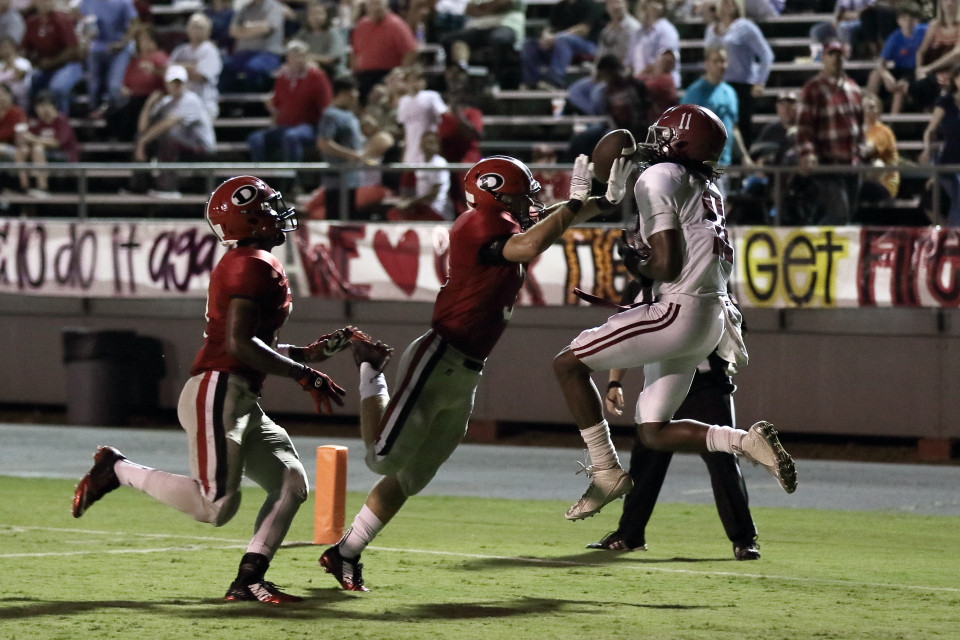 Here's a friend of mine shooting the football game for a local newspaper. (He's had hard news images published in the NY Times. He's had a photo essay shot entirely on a smartphone about small town youth league baseball published in ESPN the Magazine.) When the play started the line of scrimmage was 30-40 yards up the field from his shooting position so he was shooting with a long lens. As the play developed and a pass was launched to the side of the end zone right in front of his position he put down his long body and began raising his wide angle body just in time to catch several frames as three players and the ball arrived simultaneously. The shot he grabbed a split second after the time I captured the image below was published as the lead image on the sports page in the next morning's print edition that went to press barely an hour after this happened. (Yeah that's me way in the background.) He still didn't have the camera up to eye level in my frame taken after the shot published at the link above. In the online photo gallery for the newspaper's coverage of the game he published a total of four images (#'s 1, 2, 11, and 12) captured between the time the football was knocked away (as shown from a different angle by my first image above) and when the ball hit the turf barely one second later (my first image is timestamped 20:04:39, my last image is timestamped 20:04:40). 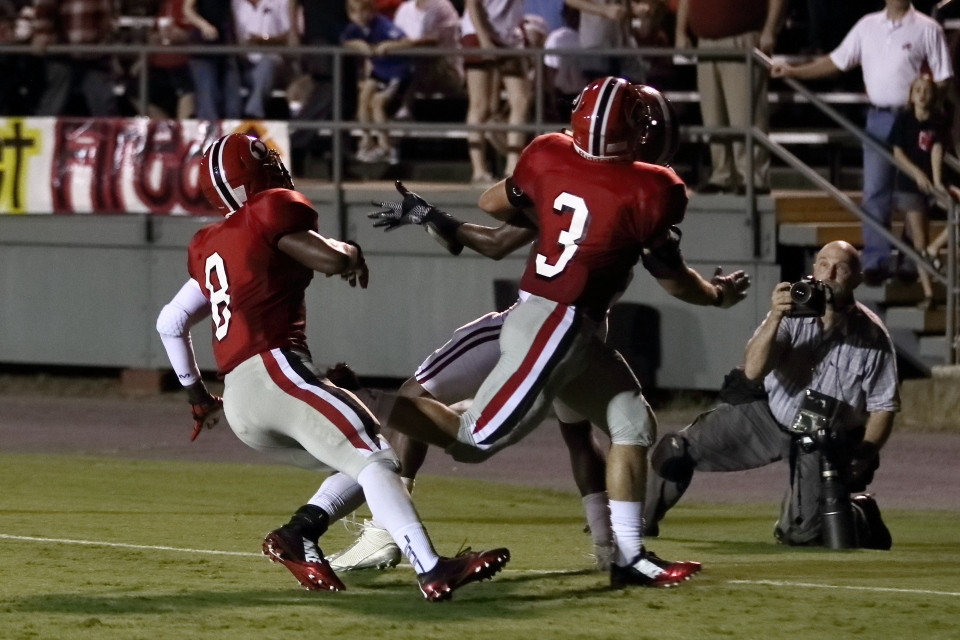 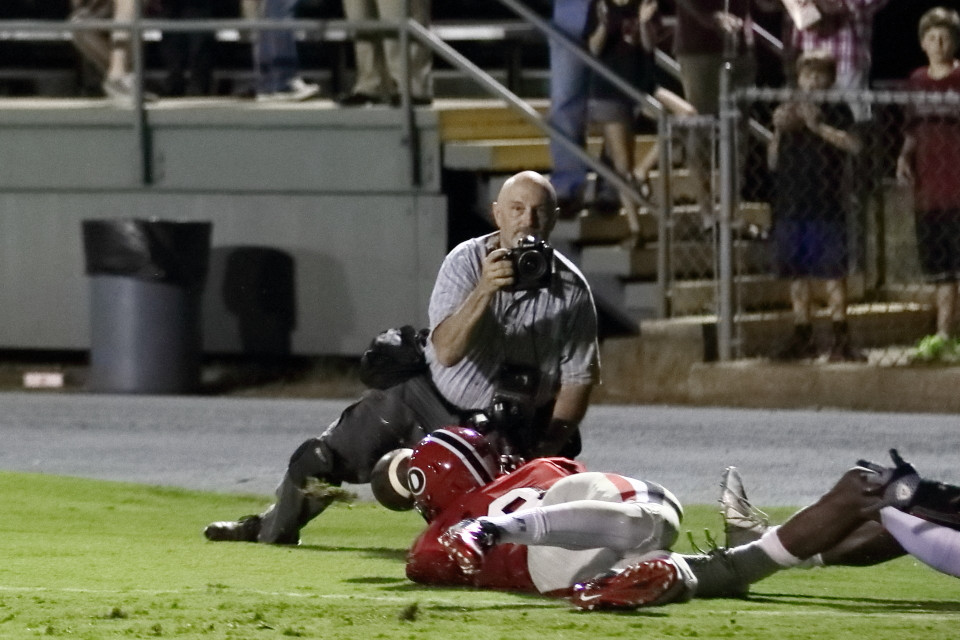 I've seen him do this more than once. I've also seen the results. If I were a betting man I'd say he nails such a shot much more often than not. He is now the Director of Photography for the Tuscaloosa News and shot their coverage of the last half of the University of Alabama's march to a football national title in January of 2016. That was the sixth college football national championship game he's shot in the last eight seasons (4 covering Alabama, 2 covering Auburn).

Was such blind shooting the norm in pre-digital days too? That would have taken a lot of skill if focus was manual & due to a lack of burst mode shooting you'd only get a few blind shots. Especially if you must manually advance the film after a shot.

Some cameras had no way to see through the lens prior to taking the shot. A cursory viewfinder was attached to the side of the camera or, if you had a deluxe model, to the front standard that held the lens. No accommodation was made with such viewfinders for lenses of varying focal length. The photographer just had to know how wide the angle of view for the lens being used was. Focus was set by estimating or measuring the subject distance and lining up a mark on the lens to a scale with that distance. Aperture and shutter speed were also set manually with no metering built into the camera. Some of those cameras used roll film with anywhere from 6-12 shots per roll. Others used sheet film that had to be changed after every exposure. The latest versions of such press cameras were still being used by local press photographers in my hometown as late as the early 1970s. 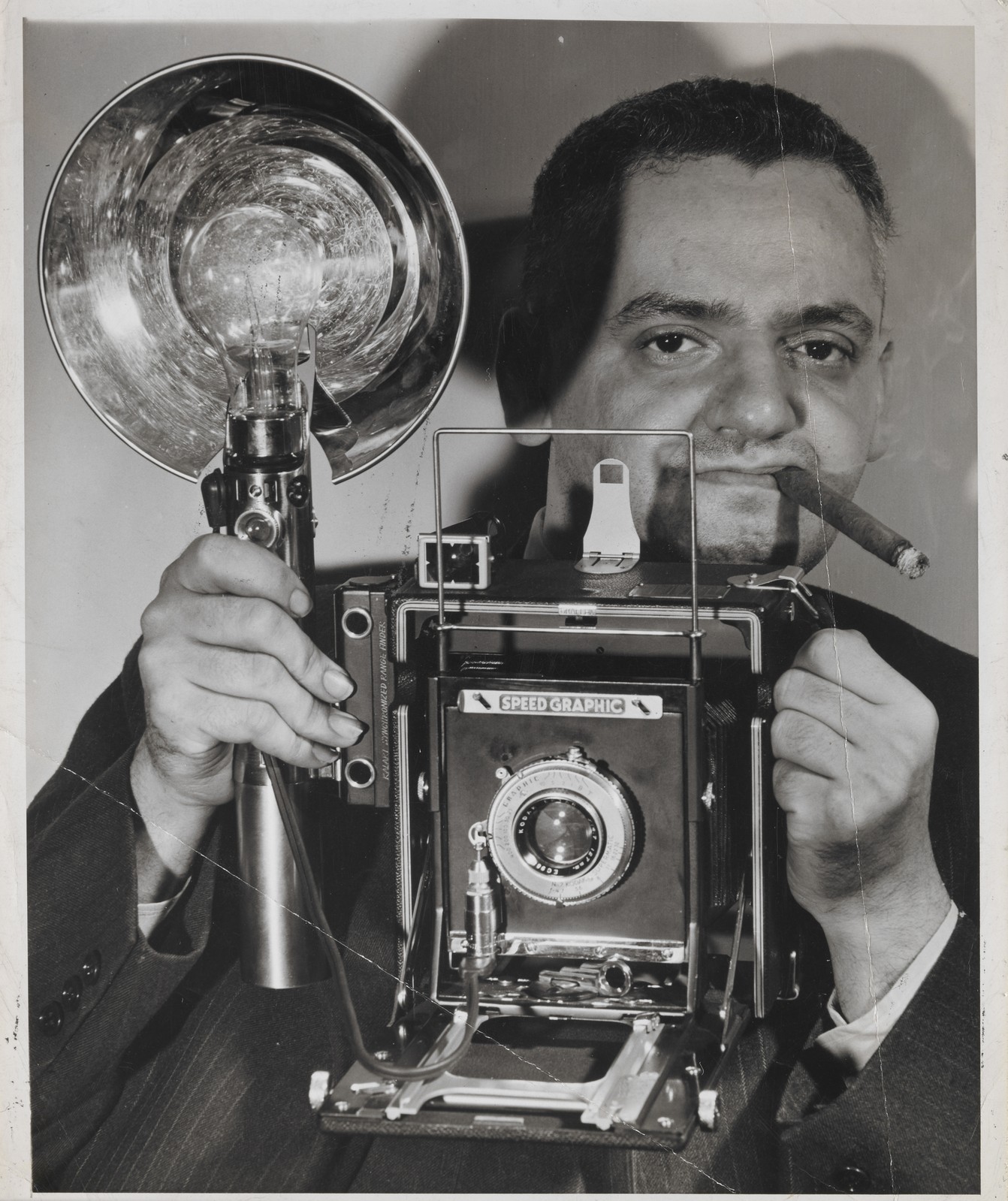 Compact mirror (as in makeup mirror) can be used for viewing from difficult angles, e.g. close to the ground. You can hold it in place with tape made to be easily removed. Duct tape is not advised, though approved by Possum Lodge.

As there is the software-recommendation tag: I have used (q)DslrDashboard to remote control different Nikon DSLRs.

Reviews on the Android store suggest mixed results, but I successfully used it both from Android devices and my Windows laptop. WiFi connection was provided by a TP-Link MR3040 router with a custom Firmware that can be downloaded from the DslrDashboard website, plugged into the camera USB port.

It depends on the camera firmware which functionality is available (ex. no start/stop of video recording on my entry-level D3200, but working flawlessly on a D5300). Live preview and still image capture worked even on the D3200.

(Not affiliated, only used it a few times.)

Yeap you can use a wi-fi card like eyefi. But they send the signal when you take the photo.

Depending on the camera there are some adapters that could send live view images. For example: http://www.nikonusa.com/en/learn-and-explore/article/h4spl2xm/shooting-wirelessly-with-nikon-digital-cameras-and-wi-fi-adapters.html

Not the answer you're looking for? Browse other questions tagged tethering software-recommendation or ask your own question.

6
How to get exposure right in night photography?
0
Sigma Lens for Nikon AF D

5
Are there any 35mm cameras that I could control with a computer?
3
Is it possible to shoot tethered with a preview on the screen?
2
Which camera offers flexible remote control and good manual controls?
8
How can I have the LiveView of my camera displayed on a TV or Laptop screen?
0
Photographing archive functions with custom naming option
10
Is it possible to use the GoPro camera when it is connected to a pc/notebook with a USB Cable?
6
How can I tether a camera to a laptop, to show its menus and functions for teaching purposes?
2
Automatic removal/correction of brightness vignetting?