since all lenses are round, full frame cameras' sensors can be 36 × 36 millimeters. Correct? Is it possible, and if so, why it has not been done yet? Would that qualify it as medium format?

That's not correct. Look at this picture:

As for the second part of your question - it is possible to qualify such sensors (in my opinion) as medium format because the most of available "full-frame" lenses will not cover these bigger sensors and so you'll need other lenses.

Is it possible and why it has not been done yet ? 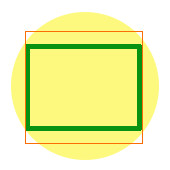 The diameter of the image circle has to be at least as large as the sensor diagonal. You can see from the diagram that the green 24x36mm rectangle fits within the yellow image circle, but a 36mm square does not -- the corners fall outside the image circle and will be dark.

There's a variety of aesthetic and practical reasons that non-square images are preferred. Indeed, people often prefer images that are even wider than the 3:2 aspect ratio that we have in the typical full frame sensor.

If you prefer square images for any reason, you can set many cameras to record a square image, or you can crop after the fact.

The sensors could be made to a square format (though the current diameter would not accommodate 36x36mm, it would need to be about 30mm) if there was a demand for it. But by that logic the question we may actually need to be answering is why aren't sensors circular given that lenses present a circular image?

There were some attempts at circular sensors in the phone space when Nokia were working on the PureView cameras like the 808 before PureView just became a marketing thing for their best cameras. The camera then used the surface area it needed to make the chosen aspect.

Going back to squares - other square sensors are available in the 35mm size range outside of the SLR space (like the SBIG stx-16803 aimed at astronomers - thanks Dan.)

One of the things is that inside a DLSR you also need space for a mirror to move into and also for a shutter mechanism. While the shape of cameras could change to accommodate it, it's a lot of R&D for a small payoff.

It's also telling that even the medium format cameras use a non-square sensor with the Leica S, Pentax 645D, Leaf AFi, Hasselblad H5D and PhaseOne medium-format systems all adopt a rectangular aspect-ratio similar to the 6x4.5 systems than 6x6.

Any increase in sensor area also means a non-linear drop in wafer yield (the number of useful sensors you can get out of a silicon wafer) as demonstrated graphically in this answer - again it's extra cost.

Little payoff is where the idea really falls down - Canon, Nikon, Sony etc all put huge amounts of money into R&D, if any of them thought there was a viable market then they'd go for it. I'm not seeing one and the lack of such DSLR cameras on the market would back that up.

Square is not necessarily larger. 24 megapixels will hold:

And "pictures" have mostly always been rectangular, from most film, and paintings too (like Rembrandt). We did have square medium film, but the print paper was rectangular . It seems a matter of strong preference.

Not the answer you're looking for? Browse other questions tagged sensor-size full-frame medium-format aspect-ratio or ask your own question.

12
Why aren't square CMOS sensors more popular by now?
10
What limits the size of digital imaging sensors?
7
Where does the price premium of full-frame come from?
4
Why the highest resolution on smartphones is obtained for 4:3 aspect ratio?
2
Why sensors won't cover full exposure circle?
2
Why aren't multi-aspect sensors commonplace on high-end cameras?
1
Is there any camera with a square sensor?

26
Are full-frame cameras bad for sports photography?
12
Does shooting at lower RAW resolution using crop sensor camera mimics qualities of full frame cameras?
7
Where does the price premium of full-frame come from?
4
Why use larger format cameras for studio photography?
0
use a full-size sensor camera to get an image with the features of a crop-size one
24
Why did they ever make smaller than full-frame sensors?
1
APS-C lenses on full frame Mirrorless bodies