What is a leaf shutter?

Recently I saw an advert for the phase-one medium format camera system, in which they mentioned that it could sync to flash at any speed, because it had a "leaf shutter"

What exactly is a leaf shutter, and how does it differ from a focal plane shutter?

The general idea of a leaf shutter seems to have started from leaves on trees. The earliest leaf shutters had a relatively large, flat opaque "leaf" with a "stem" sticking out from one end where it pivoted.

This shutter design has a number of shortcomings though. The shutter speed isn't very controllable, it's nearly impossible to get it really fast, and it takes up a fair amount of room--the donut-shaped ring of the shutter mechanism is fairly "thick" compared to the size of hole through the middle that lets the light through. Most of these problem stem from a couple of factors.

Another very widely used early design (the Kodak Brownie, to be exact) looked like this: 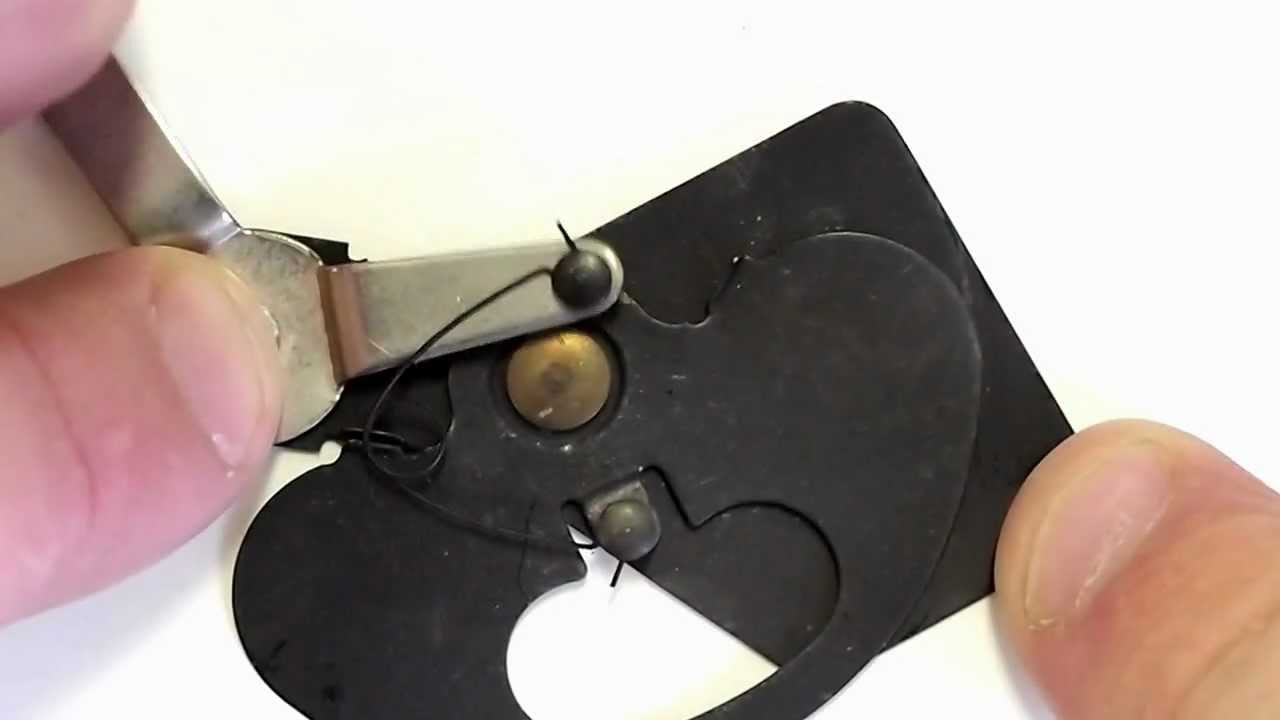 In case it's not immediately obvious, this works, by moving the single shutter blade from one end of its movement to the other. When the rounded slot in the middle of the blade moves in front of the aperture, the shutter is open. When the blade gets to the end of its movement, the solid part has moved back in front of the aperture to stop the light again.

This is really inexpensive to manufacture (and pretty easy to make fairly dependable--many Brownies built in the 1800's still work fine today) but has most of the same problems: difficult to control shutter speed, and (especially) nearly complete lack of ability to make a really fast shutter.

Later leaf shutters fixed that by breaking that single "leaf" up into a number of pieces. It continued to be called a "leaf" shutter even though the "leaves" usually didn't look much (if anything) like tree leaves any more.

One basic design that saw extremely wide use was on this general order: 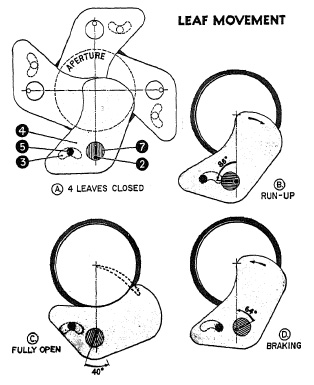 Instead of a single leaf that covers the entire aperture, this has a number (four in the case, but anywhere from 3 up to 20 or so were used in different designs).

Probably more importantly than the number of leaves is how they're driven. Each blade has a pivot (labeled 7 in this picture). To open and close the blades, there's a pin that fits into the crescent-shaped slot (labeled 3). The pin moves in a (relatively) straight line. As it moves from one end of the slot to the other, it first drives the leaf open, then drives it closed again.

Those pins (one for each leaf) are typically mounted a ring. Looking at it from a more global perspective (i.e., the shutter as a whole, not just one leaf) the ring is turning. So, when you cock the shutter, you're loading up the spring that drives that ring. When you release the shutter, you're letting it rotate through part of a circle, so it opens and closes the shutter again.

Since this is "driving" the shutter leaf in both directions, it much more control over the leaves. Since each leaf only has to cover a fraction of the aperture, they're lighter and thinner, the overall assembly can be much more compact--it the ring around the aperture doesn't need to be nearly so thick.

In most typical cases, a leaf shutter is located either immediately behind the lens, or "inside" the lens, with elements of the lens both ahead of and behind the shutter. It's located here so that the aperture it needs to cover/uncover is relatively small (usually much smaller than the lens aperture, not to mention the size of the focal plane).

This means the leaves are relatively small and light, and they only have to travel a relatively short distance, which is what allows them to fully open and fully close in (say) 1/500th of a second, even using only the technology available a century ago or so.

It also means that (unlike most focal plane shutters) a leaf shutter normally provides flash sync at all shutter speeds. A focal plane shutter has a pair of shutter "curtains". Rather that covering the round aperture, it covers the (typically square or rectangular) focal plane, immediately in front of the film/sensor.

The trick here is that a focal plan shutter doesn't fully open and close during that time. On a focal plane shutter, the maximum flash sync speed is typically much lower than the maximum marked speed--typically around 1/250th of a second on a current shutter (but as high as 1/350th in a few cases). Higher speeds than that involve the second curtain of the shutter starting to close before the first curtain has fully opened. At the maximum shutter speed, you end up with a thin "slit" moving across the film plane, so although any one part of the film/sensor is only exposed for a very short time, the overall time from the beginning of the exposure to the end is considerably larger (the flash-sync speed, to be reasonably exact).

Lest we be incomplete, however, I feel obliged to point out that "leaf shutter" and "focal plane shutter" aren't necessarily antonyms. Although it's unusual, it is possible to build a focal-plane leaf shutter.

A leaf shutter is located in the lens of a camera, rather than in front of the focal plane inside the body of the camera. They are made of several metal blades that fit together in a circular arrangement with the intersection of all of the blades overlapping in the center. When a leaf shutter opens the hole gets gradually larger from the center to the edges. When it closes the hole gets gradually smaller from the edges to the center. What this means is that light travelling through the center of the shutter falls on the film/sensor longer than light travelling through the edges of the shutter.

Not the answer you're looking for? Browse other questions tagged terminology shutter high-speed-sync leaf-shutter or ask your own question.

14
What is the difference in purpose between a focal plane shutter and a leaf shutter on a camera?

11
What factors prevent camera sync speeds from being faster?
14
What is the difference in purpose between a focal plane shutter and a leaf shutter on a camera?
3
Disadvantages of always setting flash sync to 1/320s (Auto FP)?
11
Is there no crossover point where shutter speed overtakes flash duration?
3
Leaf vs Focal plane shutter - Is there is difference in image captured?
3
How does the position of my camera affect how the shutter performs?
2
Which Canon DSLRs support High Speed Sync and what other requirements are there?
3
Is HSS open or closed loop? Does it work in complete darkness?
1
Panasonic FZ1000: Flash FP high-speed sync oddities, 1/16000s mechanical shutter?
2
Is my image exposure off due to shutter problems?