I have a photo of a parking lot in overcast, rainy conditions. I personally consider my subject or theme to be the state of the weather and the condition of the quality of the humid air. A friend observed that he thought it was not a good photo because of the cars. I let him know that I did not consider them to be the subject of the photo.

Aren't there some good examples of principals in the photo whom are not the subject? I would think there would be one or a few that have people, but they don't always need to be the subject. Or do they?

Per request, here is the photo in question:

EDIT: in response to many of you here, I do agree that the cars have the sharpest focus. I like to think of them almost as a horizon. My eyes are drawn there, but I then allow my eyes to dull a little to see the difference of what's above and what's below. In this regard, wouldn't the cars be effective as the point of focus? 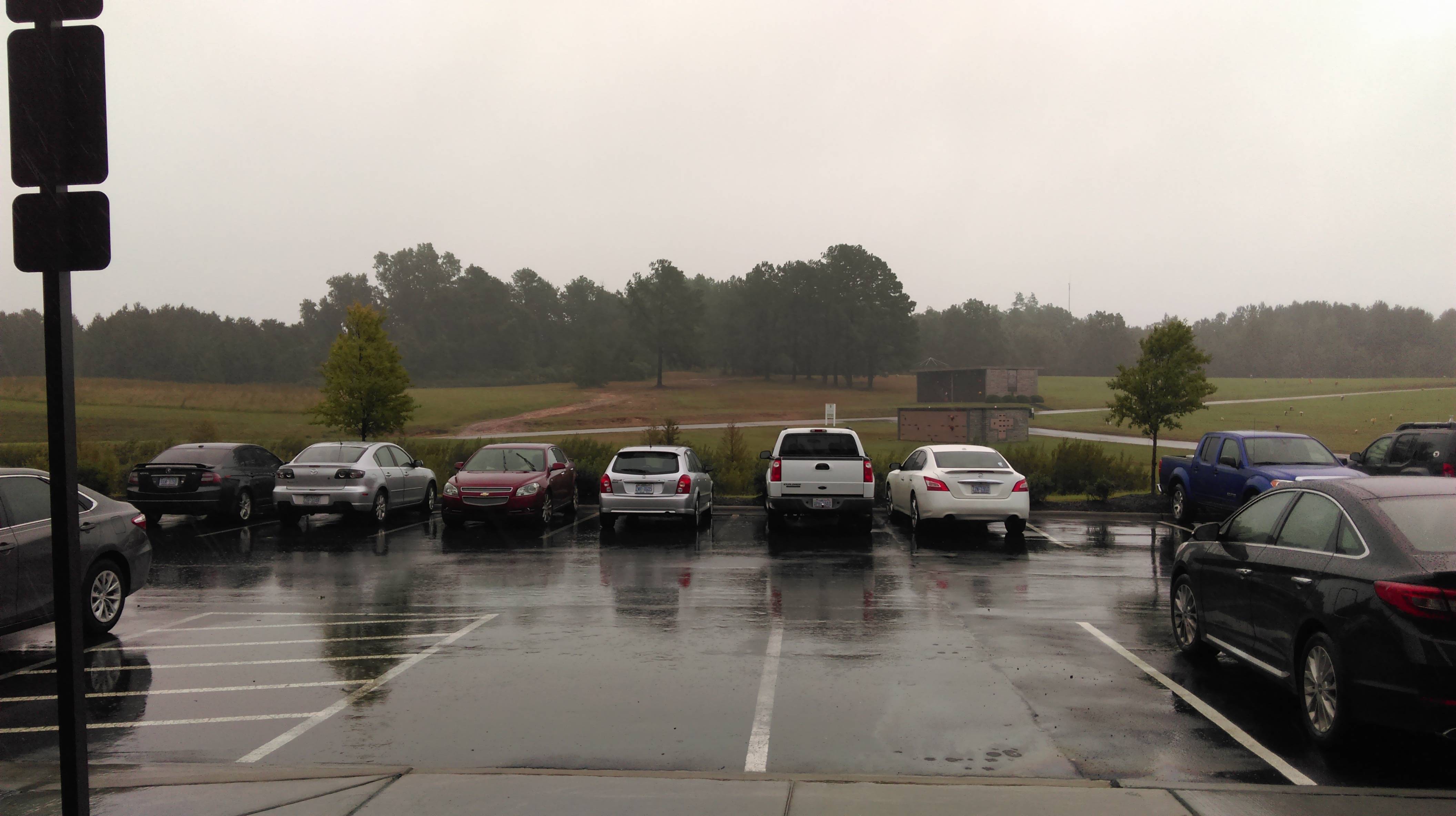 I have to disagree with the consensus here. Please see the two photos below. Given the advice of many here, it seems the goal of a good photo would be to remove the distractions.

The above photo is the original; below is the crop, less the buildings, cars, and walkway. I would argue, however, that each of them frames the sky, and each shows the effect of the surrounding light. Particularly the walkway immediately in the forefront to the observer. The light is bright here, unusually so for the weather that's closing in.

I still contend that the original image above works as a composite condition of the day, and cropping it in any way will detract from the effect (well, mayyybe I would remove the handicap sign - but I like a little natural framing).

Is there anyone out there that agrees with me? Doesn't anyone think either of these original captures hold merit in expressing the theme of the climate, rather than seemingly presenting subjects that are really irrelevant? 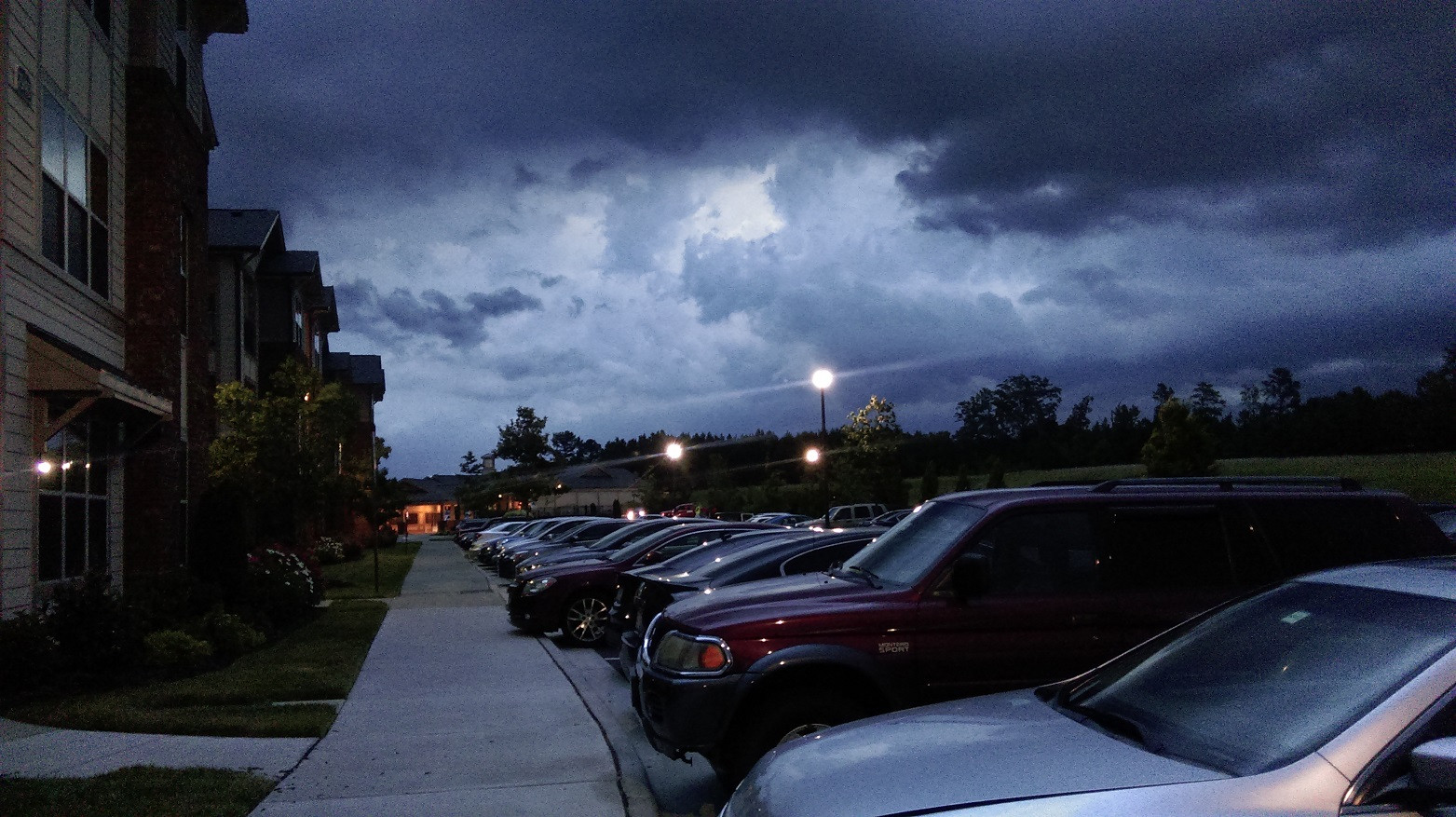 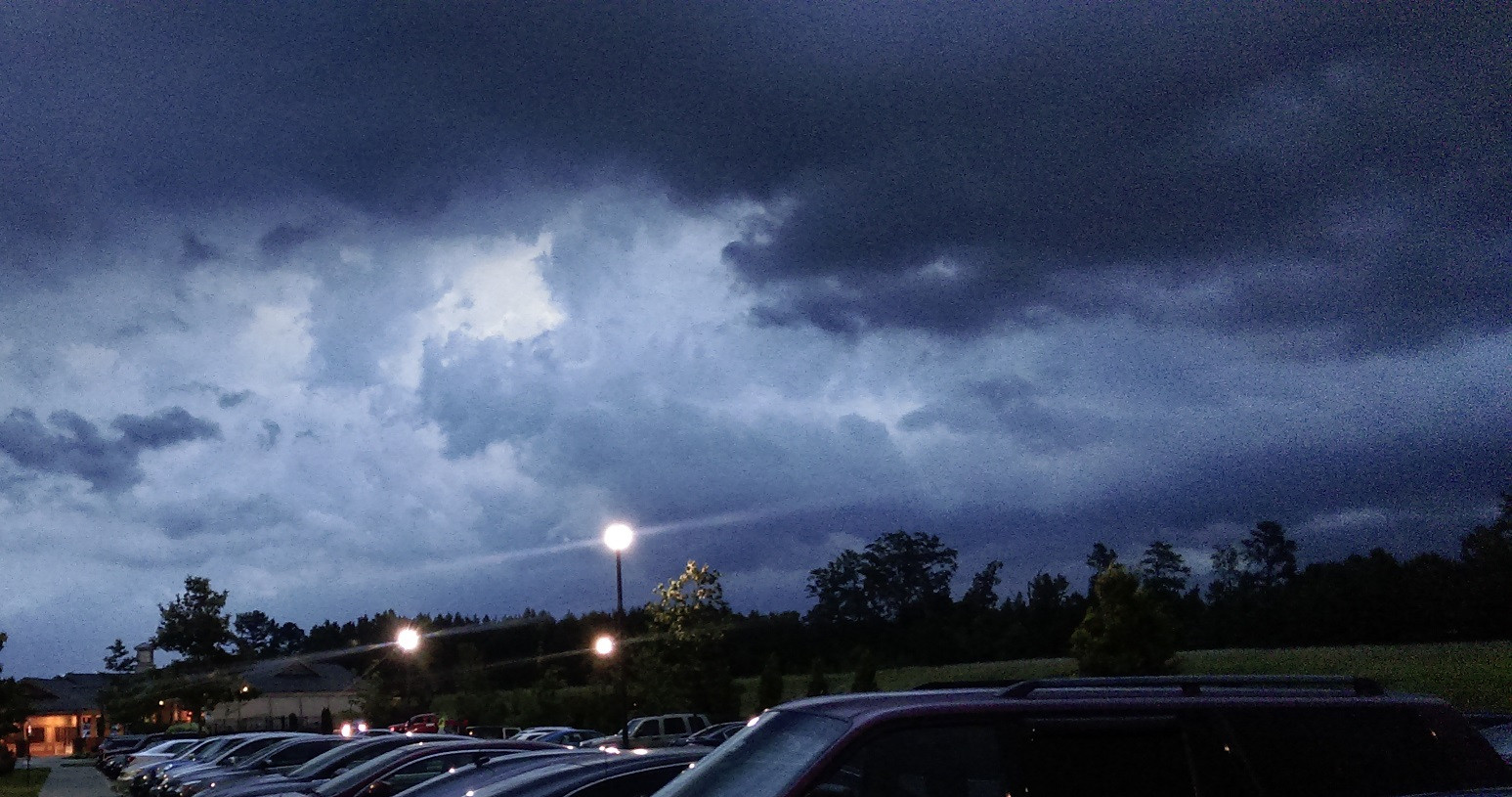 What they are trying to tell you, even if they don't realise it or quite know the right language, is that the vehicles/people are a major distraction in the image. If what the viewer perceives as the subject of the image is not what you intended then as the artist you probably need to do some reworking or start over.

The objects that viewers see as the subject are leading the viewers' attention away from the thing you wanted them to be interested in. Usually things which have high contrast, colours and sharp edges are most likely to lead us and you can take steps to remove them or lessen their impact on the image. Humans are just tuned to automatically seek out recognisable shapes and see them when they may not even be present (in patterns of random noise, or clouds for example); so you need to remove or lessen their prominence in the image.

There may be some things you can do in-camera for example controlling depth of field to try to make foreground objects more diffuse. You could also look at different viewpoints (high/low positions), angles of view (both tilt and zoom) and your location. With landscapes/skies it's always worth having a polariser in the bag too, they can really make a big difference.

In post-processing you can adopt a reverse-cropping method, where you start with a crop at the absolute tightest fit to the most important item in the image and then expand the area to include areas of interest. Also in post-production you can look at using effects like blur, desaturation and adjusting curves/levels with a mask.

In the sample image the cars are in sharp focus, which immediately draws the eye and aesthetically they have no place being in the image at all. They stand between the viewer and the landscape behind when all you had to do was walk past them and shoot from there to give you the recession, or... for another view, go right up close to the puddle and get a really close-up of raindrops splashing, you're not losing any interest from the sky as it's overcast.

The cars would never make a good horizon or be useful as a point of focus unless they were the main subject. Their shape makes them naturally distracting, arguably they are designed to be seen to help prevent road accidents. They provide particularly contrasty bright and dark spots in the image which can only ever serve to be a distraction if your intent is to present some other aspect of the scene as the subject of interest.

Spend some time thinking about the different angles and distances available to you and how you might represent your subject at those distances. Have a play around and see what you come up with.

I think i can see the point your friend was making. The brightness of the cars and glare from the pavement make the fog and the overcast conditions much less visible. the overcast condition is accentuated in the background much more than in the foreground. Often times the viewer will perceive whatever is in the foreground as the subject. Additionally, they will notice what is most in focus, in this case the cars. 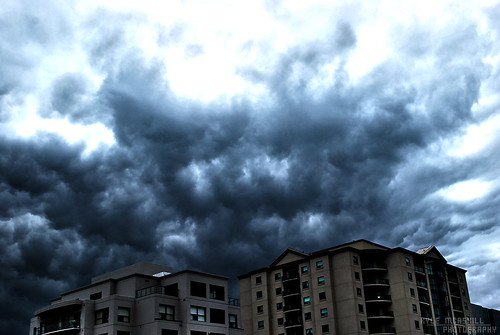 Notice in this photo that the building colors are very bland and dark. The sky here encompasses the entire image and is the largest part of the photo, and it also the brightest part of the image.

Here is a great example of these principles in motion.

When your composition of the scene draws the viewer's eyes to your intended target, rather than to the people or cars.

If your intent is to draw attention to the wet pavement, then the wet pavement needs to dominate the composition. If you want to lead the viewer's eyes to a specific element in the scene then you have to eliminate as many other possible distractions as you can, The more options you give the viewer to focus on, the more likely it will be that they focus on something other than what you wish to emphasize.

It is perfectly fine for you to insist on including the sky, and the field, and the cars, as well as the parking lot. If you are happy with the image with all of the various elements vying for attention and that's what matters to you the most then the image is fine as it is. Just don't be surprised (or frustrated, or upset) if others see something different in the scene as the main point than what you intended it to be. If it is more important to you that others see the same thing as you want them to when they view the photo, then you're going to have to eliminate the distractions.

In addition to composing much more tightly, as shown below, base your level horizon on the elements in the parking lot (which are tilted due to your shooting position) rather than the line of cars or the distant horizon. What part of an image we see as "level" will also draw our eyes.

You could step just a bit to your left, so that the stripe between the two empty spaces is vertical with no tilt either to left or right. Move the camera position higher and aim the camera lower so that more of the light colored sidewalk in the foreground balances the light colored line of cars in the background. by moving the camera higher you also stretch the distance from foreground to background without changing the distance from left to right. This will show the same area as in the crop below in a more "square" aspect ratio. Use a wider aperture and focus in the mid-point of the vertical stripe so that both the sidewalk and cars are not as focused as the wet surface of the dark parking lot.

In a picture with a theme all of the compositional elements in the frame should visually speak to & support that theme. When you get that right just about everyone who looks at your picture will intuitively understand what that theme is. Additionally, if one finds its necessary to ask such questions in defense of one's theme, one needs to step back & reassess how the visual story might be better captured then try again.

Look at the first sentence of your question and think about why you mention the parking lot before any other subject in the image. Then consider why you mention it at all.

While the question as asked seems to be aimed at style and composition, there may also be a legal aspect: In some jurisdictions, taking (and publishing) pictures of persons (or even their cars with license plates) may be violating the personality rights of those persons unless they are only "bystanders" and not the subject of the photo.

Whether or not one could call the ten cars on your parking lot "bystanders" - I am not sure. They certainly contribute to the atmosphere (like tourists and local at the pyramids) and define the location as parking lot in the first place. But they also constitute a lot of the overall composition (you are shooting between the two cars in front, the other cars are aligned straight across the middle, their reflections are important for the image, ...)

22
When is it OK to place the subject in the middle of a picture?
4
When do you center your subject in environmental portraits?
6
What is the proper composition when shooting two persons standing by each another?
6
How do I compose photos with prime lenses?
12
When should the negative space not be used to bring attention to a subject?
8
How can I compose city / cityscape shots to avoid distracting elements?
2
Why are mystery and ambiguity valued in art photography when they're not positive in normal life?
33
Why do people like square photos?
17
How to compose such that the context does not overpower the subject?