Difference between full frame and crop sensors, with regard to zooming [duplicate]

Given two sensors of different sizes, but with an equal number of pixels, and the situation below; are there any differences in the images captured in the bottom two drawings? Since both sensors have the same number of pixels in both directions, the resulting images will be of the same size. 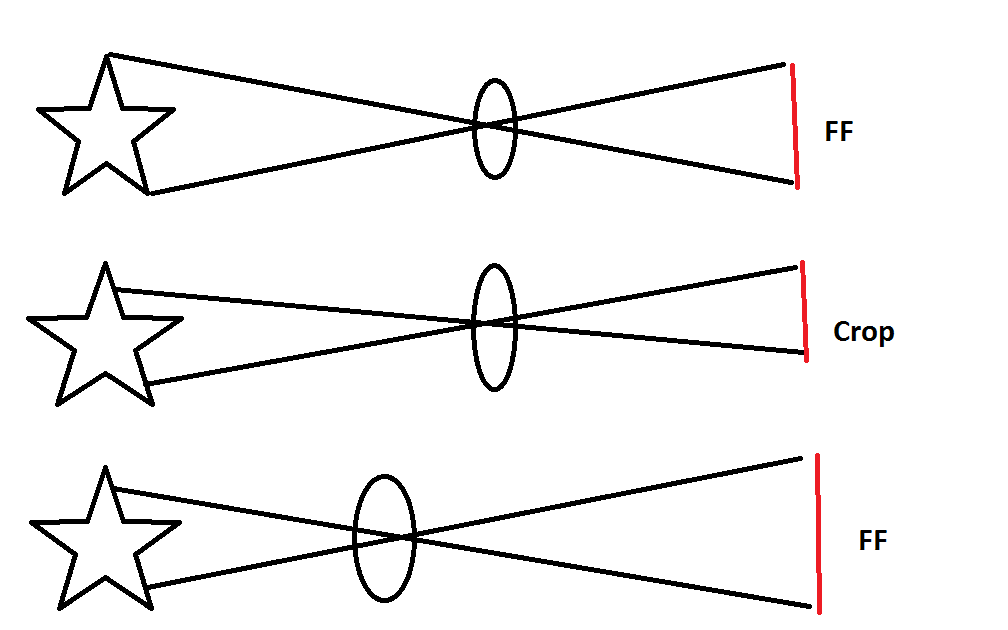 The first two drawings depict the difference between the sensors using the same lens. The last one has a different lens in order to capture the eqivalent of scene 2.

A couple of questions:

The two bottom pictures will "look" the same. They have the same angle of view, assuming the object is far enough so that the different lens to image plane distance is not relevant to the lens to object distance. This would be true, for example, for a landscape shot of a mountain.

You have the same number of pixels presenting the same picture, but all is not the same. With the smaller sensor, less of overall scene light was used to make the picture, and each sensel received less light. If both sensors were made with the same technology, the smaller sensor was operating at a lower signal to noise ratio. In photographic terms, the picture from the larger sensor will have less noise, particularly in dark areas.

Another effect is diffraction. Diffraction effects are relevant over a fixed size. This size is larger relative to the overall picture for the smaller sensor. In photographic terms, this means the larger sensor can yield better sharpness, particularly at small apertures.

Will there be any differences between the images captured by the second and third drawing?

You get the same effect with two lenses of different focal length on the same sized sensor. Say you have a 50mm lens and an 80mm lens. You can capture the same amount of the subject with both lenses by moving the camera closer when using the 50mm lens. But the 50mm lens still has a larger angle of view, so will capture more of the background.

If so, are there circumstances where the crop sensor is able to capture an image that the full frame sensor is unable to do?

If you're sticking with the same lens, then yes, the two sensors will see the world a bit differently through that lens. If you're willing to use different lenses then you should be able to get similar photos with both cameras.

Will the zoom of a zoom lens be of a different quality than the zooming contributed to the crop sensor?

Not the answer you're looking for? Browse other questions tagged zoom full-frame cropping or ask your own question.

46
What is crop factor and how does it relate to focal length?
85
What is “angle of view” in photography?

7
Do full frame sensors gather more light than crop sensors?
1
How does amount of blur compare between differently-sized sensors using lenses with equivalent focal length?
3
Will there be any difference in photos taken using full frame and crop lenses on a crop camera?
4
Are full-frame cameras less forgiving with respect to camera shake?
0
Focal length on Full frames and cropped sensors
0
use a full-size sensor camera to get an image with the features of a crop-size one
1
Why doesn't full frame have faster shutter speed than crop (all other things equal)?