What is the role of cameraman/photographer in 360 video and photography?

With regular cameras, it’s all about framing, perspective, etc. But with 360 videos and pictures becoming mainstream, how does it change role of a cameraman? And how does one stay away from the frame?

What on earth makes you think you're not still composing, even if you're shooting 360º? You can make a sizable difference in the images you take simply by choosing a different vantage point. 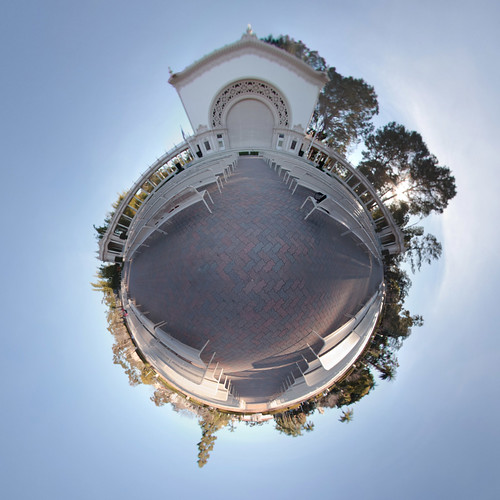 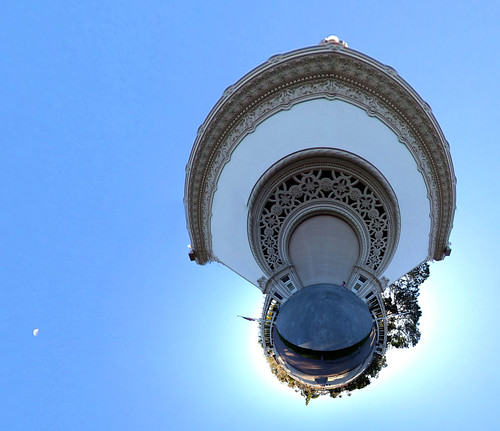 Both remapped from 360ºx180º panoramas of the same subject (the Spreckels Organ Pavilion in Balboa Park), taken from two different vantage points, first one's from the walkway behind the first section of seats, the second one was taken on the stage.

You still choose the viewpoint, just like a cinematographer chooses camera placement. You still have a frame--it's just a full spherical one, but you still choose what goes inside it. And maybe you adjust in post by re-assigning yaw/pitch/roll. But you can still affect what a 360x180 still image looks like with those simple changes (see How can I edit equirectangular images?).

Personally, I don't think the role of the cameraperson has changed at all--you're still in control of what the camera records for you to present to a viewer. You just have to stop thinking of your frame as a rectangular box, and more as a sphere.

I think the role of the photographer would be comparable to the role of a sound-engineer at a concert. He has to choose the right equipment for the situation and set up and wire everything correctly and when the concert starts he has to make sure that the quality of the result is okay.

The art will therefor rather be to master the technology you use and capture the light that the environment throws on your camera in an esthetic way. But that's what photography has always been about, right?

Like Inkista, I dont see the difference. You still need to choose the optimal color grading, exposure ( which can actually be more difficult) , the depth of field, the vantage point, what should be in center. There's some added responsibilities; what quality of the software that makes the stitching and warping, choosing the representation: With nomral photography you are showing some , maybe 40 degrees FOV on a frame (monitor or canvas ) with the same 40 degrees rectangle. Now you are showing 360 degrees on 40 degrees, unless you have a head mounted display with an IMU that measures your heading. you can do planar warp, or cylindrical warp, or spherical warp. Your vantage point will decide which symmetries occur, which occlusion are there, and you have to ensure that your image is interesting. I think "interesting becomes difficult without the crop of traditional images. Regarding " how do I stay out of the frame" ,if your camera is on a tripod, possible with a rotation gimbal, then move along with it as it turns.

Not the answer you're looking for? Browse other questions tagged video 360-panorama or ask your own question.

6
How can I edit equirectangular images?

17
Does every frame of video (or live view) on a DSLR count as a shutter actuation?
12
Does the convergence of video and photo technology in digital cameras have a negative impact on strictly photographic ability?
2
360° (spherical) panorama with person / portrait?
0
Find focus and effective range of single focus camera
0
Convert a 360 degree video to a single image
1
Capturing image from movie on memory stick inside camera without using a computer
3
Crop overlap in existing panorama
2
Photography tricks for widening objects or reducing narrowness?