I'm considering switching to the Sony A55 (I don't own one at present). The A55 does 10fps in continous drive (but I will only be using around 6-7).

To replicate the visible colors of a fish onto a camera sensor, one needs to supply 'hard light', which I've only managed to do with an external flash so far, open to other suggestions.

However given that Yn560 iii and I presume other flashes need at least a few seconds to recycle, it seems that high speed + flash photography is not realistic. Is this a right conclusion?

Additionally, in the event that the flash does fire multiple times, would it result in say (ideally) 50% illuminated and 50% non-illuminated pictures?

I hope my question is clear, I'm quite confused about the concept myself, so it may carry into my question.

If you can combine the ability to control your burst rate to something around 3 or 4 frames per second and can light the scene adequately with a very low power setting, with many speedlight models it is possible to have the flash fire for every frame in such a burst. You just need to play around with the components you are using and see where your "sweet spot" is.

How long a flash takes to recharge after a particular discharge is dependent upon the total capacity of the flash's capacitors and the amount of power used for a particular strobe. Most speedlights control flash power by controlling the duration of the flash. When set to very low power only a fraction of the flash's total capacity is actually discharged. This allows the capacitors to be raised back to full capacity much faster than if a full power discharge had been used. If the flash is capable of drawing power from an external battery pack this will also usually speed up the time needed to recycle.

This is what the external battery pack port looks like on your YN560 II flashes: 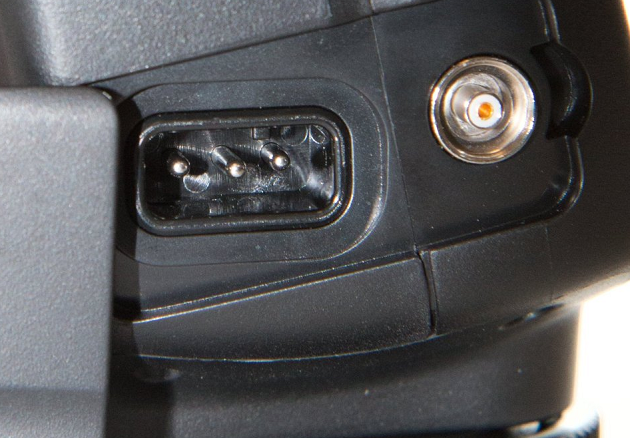 It's on the left (That's the PC Sync connector on the right). It is a fairly standard pin arrangement that most generic external battery packs will fit.

The flash must recycle before it is triggered. Some flashes refuse to trigger unless recycled, but most will flash anyway, but at a lower unrecycled output (irregular illumination results).

A speedlight might need 2+ seconds to recycle if at full power level, but it recycles tremendously fast at low power levels. Try it about at 1/8 power level, then adjust as results show. Lower power will run a longer time (a greater number of repetitive flashes), but only 4 or 5 flash bursts might squeak by at slightly higher power level. Use NiMH batteries (they're faster). Don't overheat your flash.

There are cameras which are capable of continuous drive with the flash. The Nikon Coolpix P7100 is one of them but not the A55. Still, the continuous drive necessarily gets slower to accommodate time for the flash to recharge.

Charging time is not constant either, so you may get a few fully illuminated shots and some not mixed. This will vary according to the flash output, the higher the output, the longer it takes to recharge and so there will be more shots before the charge has reached capacity. Some cameras even block shooting if the flash has not sufficiently charged. There is sometimes an option to control this. Of course, TTL flash metering simply will not work.

An old flash of mine has the following diagram on top: 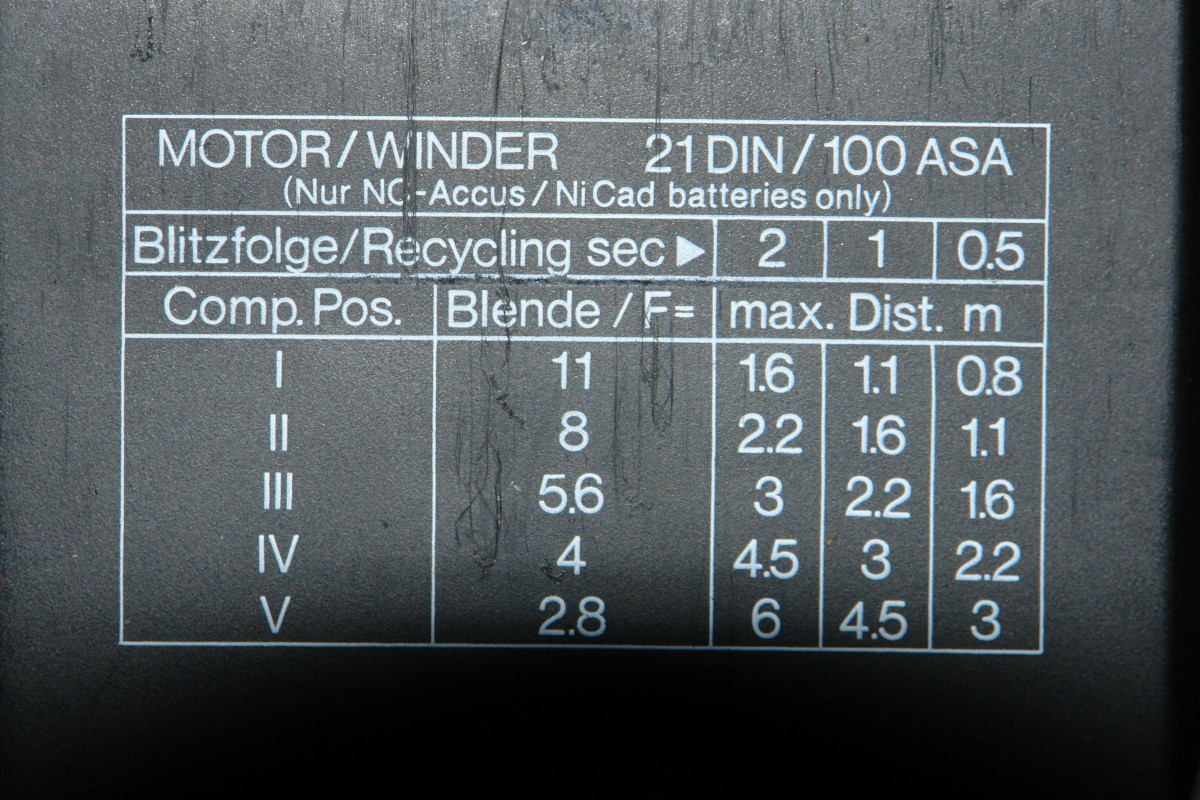 It basically says a lot: "NiCad batteries only" (note that this was at a time when NiMH was not yet available and NiCd batteries were the rechargeables delivering the most current): you want batteries that deliver fast and/or a power supply operating off the mains. When you aim for higher recycling times, you need to pick shorter distances and/or wider apertures, in order to reduce the required power of the flash. If you fire every two seconds, the guide number is 17.6m while full power has a GN of 40m on this flash. That corresponds to about P/5 where P is the full power. With a repeat rate of 1/sec, you just have P/10, and at 2/sec, you have to work with P/20.

So since you can just employ a fraction of the power for repeat use, you need to use a flash that has considerable power to start with. Particularly if you use even higher repeat rates because you are not operating with a motor winder but a digital camera's burst mode.

Not the answer you're looking for? Browse other questions tagged lighting burst-mode action or ask your own question.